Talk about anything and everything here within reason.
Post Reply
31 posts

I've always enjoyed the unusual, but I don't think these will ever have a wide application... Can also be done DIY stylin' On the cheap...using wheelchair push rails and roller blade wheels

Future hubless electric- frame is to be covered with solar coatimg.

wow. how 'bout an rc motor drive or stokemonkey on that bike?

wow. how 'bout an rc motor drive or stokemonkey on that bike?

A hub motor mounted and used as a non hub motor...i.e mount hub motor in the frame NOT the wheel with a sprocket on it and chain connecting it too rear wheel hub by chain...basically..

design skools have had a stiffie for the donut wheel for as long as i can remember.
it's against their religion that they can't bring themselves to draw a normal wheel.

what are the supposed benefits?
guess one ride would tell ya if ur fillings all fell out.
would be cool to have at least one hubless bike tho.

i think it's more the case that it's simply different rather than cool.
if the hula-hoop bicycle wheel had been invented first, making it the the 'normal' wheel, would we be ooh-ing & aah-ing over what a breakthru concept spoked wheels are?

there's a lot of things like that, just different for different sake.
i still can't figure out the popularity of text messaging.
if teletype was the only form of long distance communication (after supplanting telegraphing morse code), i would expect that it too should quickly disappear with the invention of the telephone where u can actually hear! the other person's voice (amazing).
yet here we are, seems like a step backward to me & i wonder if a hubless design might also.

btw, wheels aside, that boardman frame is a straight clone of a softride rocket.
strange that he didn't copy the lotus frame that won him olympic gold.

the one thing I was thinking about using these types of wheel set-up.... is stability whilst on the bike..... instead of the gross weight being a foot off the ground, it could be 3-4 inches....
Top

the one thing I was thinking about using these types of wheel set-up.... is stability whilst on the bike..... instead of the gross weight being a foot off the ground, it could be 3-4 inches....

On a Bike, that isn't nessessarily good. Generaly, the higher the weight, the more stable.

Hubless may be pointless, but it sure looks cool 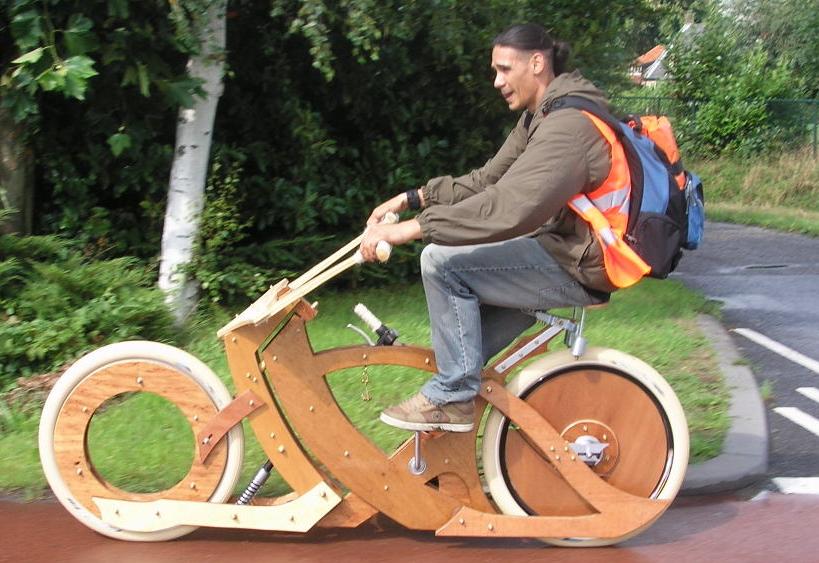 I so want to make that in aluminium...^^^^^ think
i just found the inspiration for a project bike

good....?
ever drive forklifts w/2 ton lifted up 40' w/same wheelbase....big diff from lower axle (load force height) between 'em....midget (little people) & Kramer wrestling in Jerrys' apartment Seinfeld episode comes to mind....
hub-less is not the point.... stability is... that wooden bike is probably made by a bored framer, but as with that chopper & a crotch rocket I saw (British dude I think), hands down w/everything else being the same, would most likely be more stable to handle than a centered load point....
geez.... all the things to make an e-bike work can be loaded into one wheel or split between the two.... sorta like that one kit for $$+ but with more power/range for less $$..
but then again being a mason to get beyond mud & brick for materials, I'd have to read the next chapter in my study book........
haha......... slate 4 wheel covers.........

but the bike's c of g don't change any.
well, not by much, it's still the big ape's big behind which determines that.
same thing goes for yer gf's wide boot.

as for mounting ev components into the limited hub space, how do u figger it should be less $$??
have u ever seen a laptop sell for less than the equivalent desk model?
not to mention the difficulty of cramming square lipo into a round hole.
Top

I had no idea what was going on with that blue hubless vehicle untill I stumbled upon a YouTube video featuring it. Of course they edit out the anoying buzz of the ICE blaring on and on. Instantly my eyes glazed over with the thought of sliping silently through the streets with an electric brushless model. The inquiry email has allready been sent on a riling chassis. It has disk brakes and supposedly goes thirty MPH and thirty miles on a tiny tank of gas, maybe a gallon.
- be seeing you

Welcome to the site, if you would like a link to the tutorial to put together this setup

okay, some more on that bushpig, wheelman, g-wheel, revolution or whatever you want to call it conversion. I just can't get the idea out of my head and if I found one with a busted engine I would scoop it in a heart beat. so here is what I'm thinking, gut the engine and anything ICE related out of there then rework the motor mounts to work with a small but powerfull bldc motor. shoehorn some batterypacks in there and cover the whole thing up with a fiberglass cowling so the controller and charger keep out of the dirt and elements. 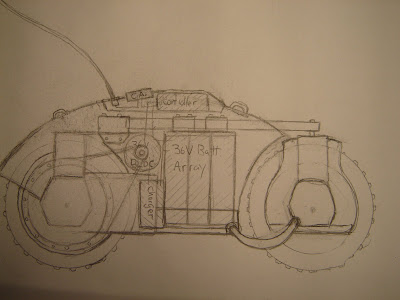 and what electric concept wouldn't be complete with some post apocalyptic troopers to rule the roads. 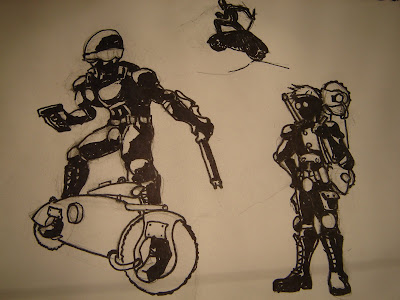 consider this just barely above napkin level, so the more brutal the crutisism is encouraged.
- be seeing you

So it turns out someone has done an electric conversion on one of these things http://www.youtube.com/watch?v=yPl3IFtXdNQ. This guy has also done some craze ICE mods doing a 110cc version and a out of hand 250cc one as well. The electric one he made looks like it has just a big ol SLA where the motor used to be and not much is shown on the motor. But I will tell you one thing, after seeing some video of these wheelman, bushpig, g-wheel things taken apart I must say they are simple as all get out. made mostly of plastic and what looks like skateboard wheels on a plastic frame for the wheels attatched to a steel box for the motor. but then again there seems to be two classes, cheap plastic friction drive ones, and more complicate but more durable chain driven models. right now I'm thinking of going diy all the way and pretty much building one from scratch. seems like the rolling chassis could be built for around $100
- be seeing you

AJ, that reminded me of "Indian Larry". And yes, he died because he kept doing this.

I have that chopper challenge episode where he dies...Side wind knocked him off the bike
he cracked his head on the ground and it was all over red rover for Indian Larry.
He has made some very unique choppers was well known and respected in the industry too..