I've been trying to revive a pack with a low cell. There is some more detail in previous post ( viewtopic.php?f=14&t=108914 ), but I will summarize here.

I unplugged the BMS, and used a single cell charger to (slowly) bring the low cell back up to 4.15v. Once complete, I left the pack sitting for 24+ hours (off the BMS), and the cell stayed right where it was at 4.15v.

Then I plugged in the BMS, and plugged in the charger. All the cell LEDs on the BMS turned on. Charger turned on for a few minutes, then shut off. I left it plugged in for several hours to see if it would balance, but it didn't. Cell #2 actually went down to 4.14v, while the others were at 4.18v-4.19v. Perhaps this was expected as the voltages are pretty close, so might not have triggered balancing (?). I unplugged the charger. After a few hours I noticed that only one LED was lit on the BMS...it was the LED for Cell #2.

But the bigger concern is, after leaving the BMS plugged in overnight (off the charger), Cell #2 is down to 4.07v. Other cells are not affected. The BMS LED for Cell #2 stayed lit this whole time. I now have the BMS unplugged again, and trying to figure out the next steps.

So in summary, it appears the BMS is draining cell #2 at a significant rate (about 0.1v per 24 hours - at least when it's near the top), and not draining any other cells. Is there any further testing / troubleshooting I can do to see if this BMS is salvageable? Or is it RIP BMS?
Magic Pie 4 / 50V 14.7ah Samsung 25R
Top

Sounds as if your drain resistor on channel number 2 is stuck I've had that happen before nice that you have LED lights like a singalab ? Like Ping's ? BMS.
Also on a piece of paper number and put yourself voltages down like this.

Thanks for the response. I suspect you are right about the drain resistor, but I don't know much about how they work or what would be causing it to get stuck. But that makes sense...seems like Cell #2 is perpetually stuck in "drain mode". Is it something feasible to fix, or would that mean it's time for a new BMS?

The Battery is from "BTRPower", no idea who makes the BMS. 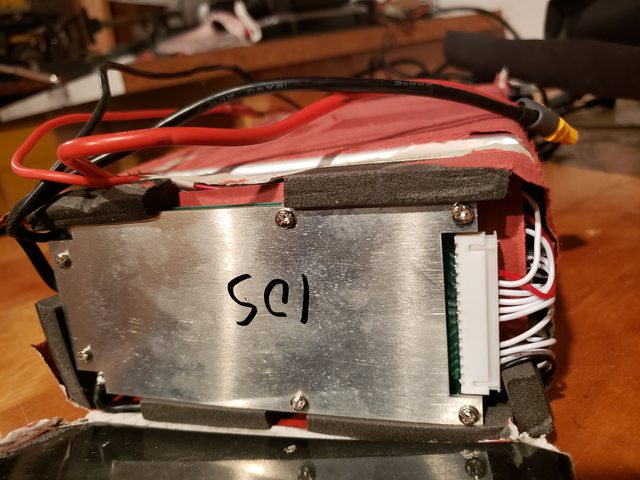 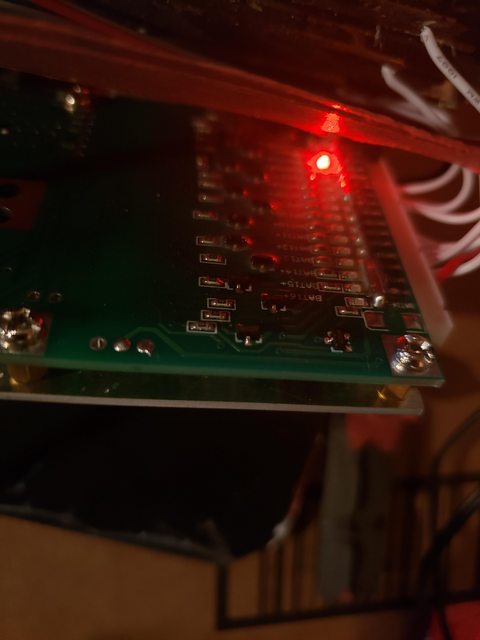 The last pic shows the #2 LED remains long after plugging in the BMS. And yes, it appears to be a 16s BMS with some of the cell inputs shorted together for use with 10s.

Here are some notes from right now. It has been off the BMS today, so no further cell drain from my earlier readings. Sorry, I ignored your advice about pen and paper

I confirmed again that the cell #2 seems to be stuck in "drain mode", so I'm convinced the BMS is slowly and consistently killing it. Otherwise, the battery seems to be performing well. I was able to take it for a ride at 10-20 Amps, the pack voltage didn't sag much at all (wasn't able to measure cell level sag), and the cells stayed reasonably balanced, BUT cell #2 kept slowly draining after use, until I unplugged the BMS.

I would like some input from the experts to offer some closure for me...if this was your BMS and you noticed this behavior, would the smart thing to do be simply replace the BMS?

Even if so...suppose I am not that smart and would like to learn the hard way

I have taken a closer look at the BMS...if anyone would be willing to satisfy my curiosity I would be very grateful. Here is a closeup of the first few cell sense wire inputs and related circuitry: 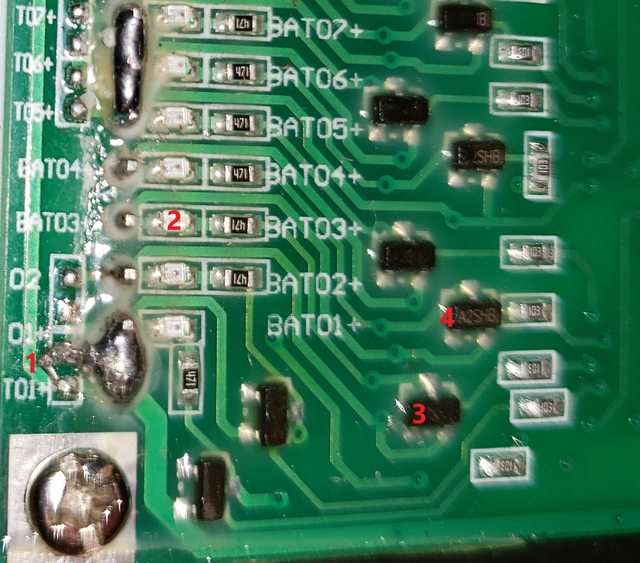 1) Wtf is this mess? Could it be causing any issues? What is "T01+"? Looks like it's connected to battery negative by design (?) in which case I don't think the bad solder would hurt anything since it looks like it might be shorting it to another battery negative terminal.
2) This is the LED that is always on, (accurately) indicating cell #2 is being drained.
3-4) Could one of these mosfets be bad, causing the drain circuit to be "stuck" on? Is there a good way to test if that's the case? Which one do you think is likely? I'm leaning towards #3.

Thanks for humoring me

I would not tolerate a BMS that has already done something screwy. It's your last line of defense against a ruined battery or a fire. If it doesn't seem to work right, assume that it doesn't.

I've repaired a mess of those cheap Chinese pouch packs, and the problem was almost always a janky or burned BMS. The ones I couldn't fix had a dead cell or two, probably from sitting with a bad BMS.
___________
Finish Reconstruction.
Top

OK, OK, I promise I will buy a new BMS haha. Thanks for the input. I do like the idea of bluetooth cell monitoring, so I think I will find one of those to replace this with.

I am still very interested to hear of anyone has info on exactly what components of the BMS would fail to cause this issue, purely to satisfy my curiosity and learn a thing or two!