The problem. Unknown. What I suspect is that it has been manufactured in the wrong way at the minus poles as you shouldn't spot weld in the center of them. Can anyone give me any clue to what might be the issue. Any other hypothesises would be appreciated as main reason for this is sharing and be able to repair these kind of things. 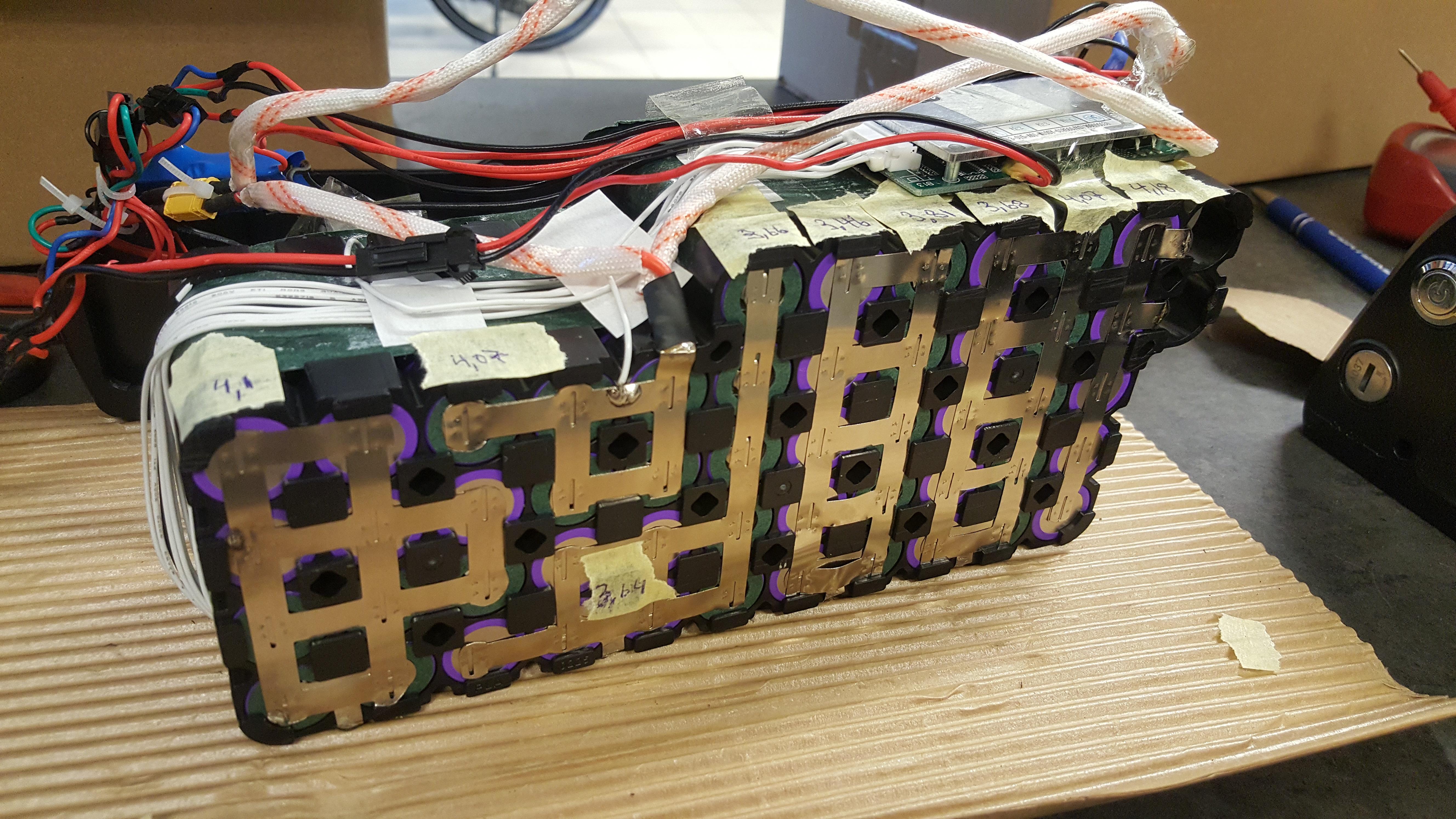 thats pretty far out of balance
what cells are they?

dont leave the bulb on the battery like this

Reasons are to find ways to fault search batteriers as fast as possible as well as finding the correct fault as if this takes to much time they are sent to the grave and recycling yard.

I've been learning about 18650 and ebikes since 2012 but this still puzzles me why so basic faults are found in new/ unused batteries in 2021.

Regarding these batteries:
Yes it would be smart to drain and equalize all cell groups and then charge. While charging I'd maintain an check on each cell group and its voltages (could be done the opposite way as well fully charge all, then drain and cycle at least twice )

Are there any other issue with the cells more than that they are bad. Like how to se if one is shorted vs has a higher resistance or is this the same thing.

The cells are FST brand 2500MAH 10A chinese power cells. I don't remember its last name code.
Salestech in an ebike store
Top

i think trying to fully charge a battery to 4.2v with a bms in an older pack actually makes the pack more unbalanced,

im doing more cells right now, why force 2500mah/capacity into cells that can no longer hold it, if theyve degraded to 2375mah,2300mah, 2325mah they cant be top balanced at 4.2v but bottom balance at 3.0v and charge to 4.15v and they balance

So. Drained and then charged all cells after putting them at the same SOC. Results are however bad as cell groups differs from 4.26v to 4.02v in the fully charged pack

Some cell groups thus does carry more capacity than other groups and by a big margin.

The 4.02v group has the most capacity and or high internal resistance.

Another cell group of the first battery in name. the 3.81v dropped to 3.75 in a few days time before this test meaning high drain on cells that shouldn't fluctuate in voltage if for any reason nothing isn"t wrong with it. I suspect internal shorts somehow.

Here's another Dolphin battery pack with a fault that is easily spotted. Pretty much not the same problem as the first packs in the first post.


48v 14ah measured capacity at 7,5% with one cell group showing imbalance or fault 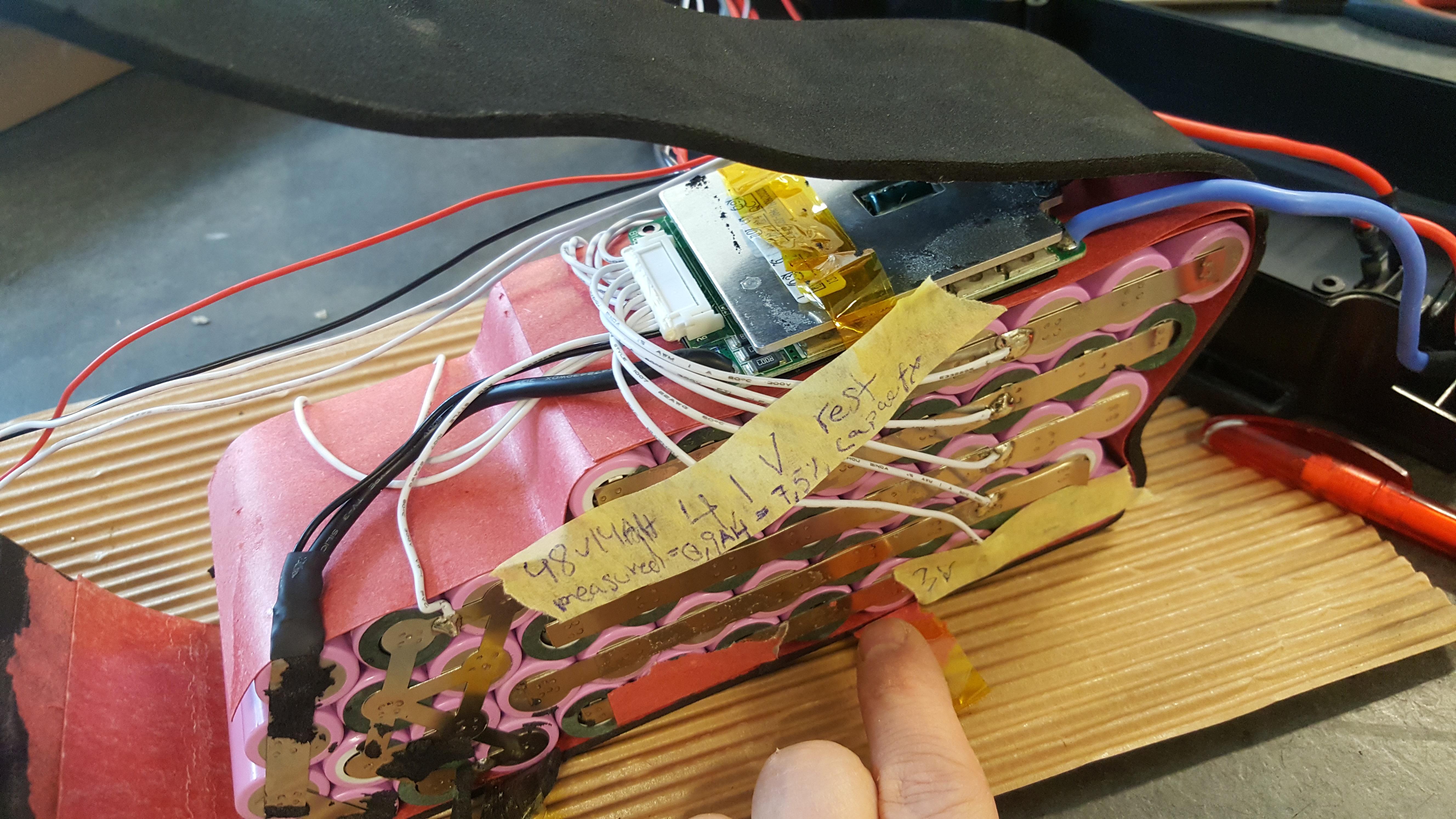 So I think I have managed to find out what causes all these odd problems.

I have another 10 packs like this to handle and figure out. My assumptions after today are as following:

The cells are the culprit. I assume the cells are rewrapped and recycled LG M26 cells which is the worst cell ever created as their behaviour makes them not worthy of being mention and or used as batteries. They will self-discharge, I suspect, they age different and odd so one cell can be 500mah and or 1200mah whilst others can be around 2000-2500mah. A BMS can´t handle this as this creates too much voltage differences between the cell groups.

The issues that have arisen are similar to the LG M26 cell but might not be exactly that cell as I thought just a moment ago. I will open it up to see if there is any codes or letters on it.

The letters on the metallic are nonexistent. No letters or any writing on the cell surface. However, on the purple plastic, there is this text on a cell I choose: 02ICEAGZ3124A29C20002189 and also the positive side protection plastic has a light blue color.
Weight is 44g (1,552 ounces)
Estimated capacity of 2500-2600MAH from factory.

Looking at the positive pole it looks like LG M26 cell but no evidence more than that and that the positive ring color is blue like an intel inside core logo doesn't give enough to really really be assured that it is.

Before I said they were:

Though that has changed as can be seen by the last post. Earlier batches had been the FST 2500. These are unknown at the moment. 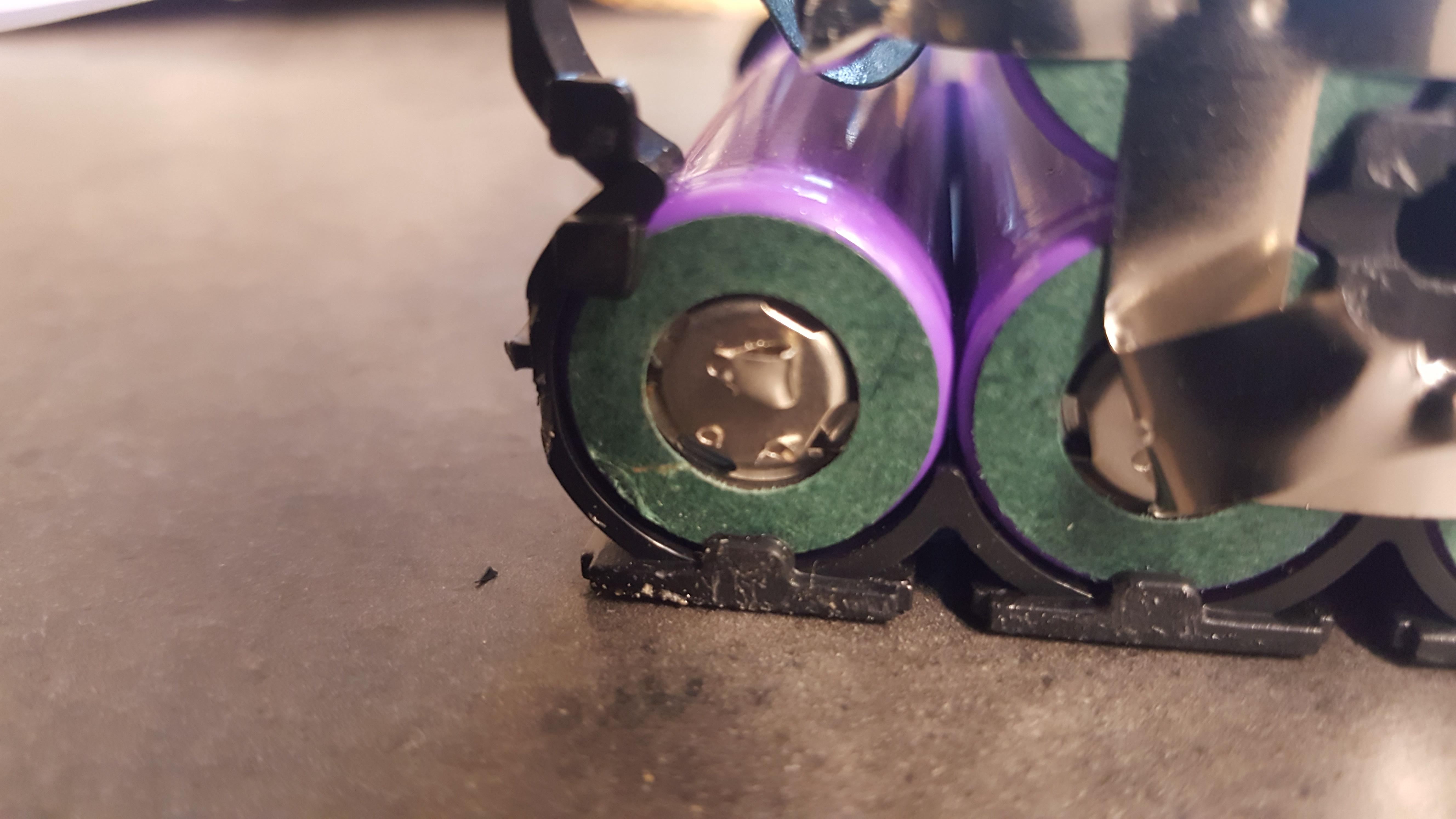