rainmaking wrote:I'm also not sure being in saltwater with a bunch of cells discharging would be deadly.

Why not give it a go? You might be right after all.

This is to express my gratitude to Justin of Grin Technologies for his extraordinary measures to save this forum for the benefit of all.
Top

I'm curious what happens when you get 96 of these, maybe 100x the size in salt water:

Would enough H2 and O2 or even H+ and OH- be created to be an issue?
eBike: Q100H on 16S with Phaserunner FOC Controller
eMotorscooter: Vectrix VX-1 on 36S
eCar: Mitsubishi Outlander PHEV... Waiting for warranty to expire
eHouse: 5.5kw On-grid solar with battery backup coming soon!

After 5 builds, the best advice I can give, is start with high quality products. I prefer http://www.ebikes.ca
Top

rainmaking wrote:Oh, and I would think grounded plumbing has something to do with hair dryer electrocutions.

rainmaking wrote:I'm also not sure being in saltwater with a bunch of cells discharging would be deadly.

Why not give it a go? You might be right after all.

I hope he builds it. Worst case, he wins the Darwin award for the most expensive way to electrocute yourself in water.

ummm...yeah lets put a blow drier that runs on 400 volts and 200 amps in the bathtub and see if it will electrocute me or not. The 120 volt 6 amp version didn't quite make me dead enough so lets go just a smidge stronger! LOL!

I'm not against making an electric jet ski. I think it's a brilliant idea! Just be very wary of the massive amount of electrons you have between your very wet legs!

Perhaps a video on electrocution and the reduced resistance of salt water vs fresh water will help. I have a 40 gallon aquarium that's not being used. I have battery packs that are 16s and 20S. How hard would it be to buy a 29 cent gold fish and fry the little bugger with far less voltage than you are proposing.

I was wondering why my Outlander had a 300v pack. Would be very efficient to step down (if it's stepped down at all).

You could simplify things , and make them much safer, if you dropped back to a 60-80v system, with something like a water cooled GM motor, or modified Zero motor, with rpms that suit your pump better.
Lipo packs can be reconfigured easily to suit and retain the same discharge current. 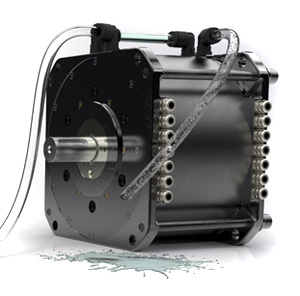 Hillhater wrote:You could simplify things , and make them much safer, if you dropped back to a 60-80v system, with something like a water cooled GM motor, or modified Zero motor, with rpms that suit your pump better.
Lipo packs can be reconfigured easily to suit and retain the same discharge current.

Unfortunately not really. That motor has probably usable ratings (20kW/5000rpm), albeit about half the one I'm using, but it weighs over twice as much at 39kg and I would still need to do something to offset the shaft. I have about 95mm between my pump shaft CL and the inside bottom of my hull. Direct drive would be nice but I can't find a motor even close to the specs I need that can be directly coupled, weight being the main issue. I would prefer a smaller high rpm motor that I could use a planetary on; that would improve my power density further, but can't seem to find that either.
Top

I was not suggesting that it was the ideal solution, just a suggestion as tho the low voltage options.
Dont forget, a gearbox, especially planetary, capable of 30-40kW , is not going to be a featherweight !
Shaft offset could be easily accomodated with a simple powerbelt transfer.
PS.. That motor also has a 50kW / 30 sec rating.
If you want light weight, (and can afford it) there is always Emrax
http://emrax.com/products/emrax-188/
This forum owes its existence to Justin of ebikes.ca
Top

Anyone try running the multistars above 5c? I want to run my gokart with 24aH 12s configuration at 50-150a continues and peak of 250-300a. Wondering if I am going to smoke these batteries and need to go with 30+aH.
Top

I've been using Multistar since they came out, but don 't have any experience w/ big packs and high discharge rates, so I couldn't say of they will "smoke" or not, but don't expect much "punch" like you would get w/a "stiffer" battery pack.
A member here, icecube57 did some testing on MultiStar discharge rates and although he didn't etch anything in stone, I took away that 40 Amps continious would be about the most one should try and get out of a typical 15Ah to 25 Ah ebike pack.
On my 2WD, the frt. motor is powered by a small 12S/5Ah pack that I swap back and forth between MultiStars and Turnigy 25C and I can really feel the difference. As the Multistar gets to about 50% discharged, I see sag of 1 to 2 Volts. W/ the Turnigy, I don't see any sag until they are almost done.
My sense is, you are asking too much of the Multistar.
Motomech

After a bit of plodding around on my scooter to warm it up I was getting 58amp bursts from a 16ah multistar with nominal voltage drop but I wouldn't go no further and in winter no chance 20amps is to much.
Top

Which packs are you using? Seems like a lot of drain for a small pack.

Hmmmm.....you'e right there Dan, I may need a few more packs putting in parallel as the voltage sags somewhat after 50mph.