www.recumbents.com wrote:Parabellum, what are you using your pack for now?

The first long shakedown cruise up and down the bumpy bike trail went well but I need to find a way to attach the battery pack more firmly. No chance of it falling off but its not solidly mounted yet.

This pack doesn't seem to deliver as much current as my LiPo pack. My Lipo pack would deliver 4000 watts all the down to my LVC at 39V. This pack seems to start off at about 3500 watts, and by the time I am down to 40V it's only delivering about 1500 watts at WOT. Oh. Maybe temperature related? It was 40 degrees F when I was riding today.

It is kind of inverter for lighting. They where 6s every block, but are 3s now.

I think, you will see more then 4kW if you trow a wrench at your battery terminals. What is doing LVC in your system? You could do 3V/cell LVC, those cell are rated to 2.5V.

The controller is set for 39V LVC, and my charger is set for 49V. That would get me some extra range if I could set it for 36V.

www.recumbents.com wrote:The controller is set for 39V LVC, and my charger is set for 49V. That would get me some extra range if I could set it for 36V.

Throw a wrench at the battery terminals?

Other way to say short the battery.

You probably see 1500w because of voltage drooping to LVC limit of the controller. Those cells have higher IR than Lipos. I normaly set LVC few volts lower for 18650 to compensate performance on low end.
Top

I have not been riding the bike that this battery pack is used on a lot, but the long holiday weekend gave me an excuse to get it out and dust it off to take a blast around town.

One thing I had noticed during my previous test rides was that the power seemed way down compared to my 48V, 10Ah LiPo battery pack. This was very disappointing to me as the high acceleration and fast speeds of this system made it extremely fun to ride. This weekend the system died after the initial crank on the throttle when I was starting my ride.

I rode it back to the garage and dis-assemble the pack to investigate. I found that massive corrosion of the fuse holder wires had caused it to fail. The fuse holder wires were pretty thick, about 10 gauge but they burned through inside the housing on one side of the holder, and on the other side where it was attached to the power switch. Stupid cheap fuse holder! Was it made with fake copper wires? After making my own fuse holder using spade lugs and putting it back together I took a couple rides around town and it now seems faster and accelerates strongly. I saw peak wattage around 3500 watts. I still need to make a longer trip to run the batteries down to LVC (39V) to see if the performance degrades as significantly as it did during my cold weather testing.

Outstanding.
3500 W is plenty enough for a whole lot of us. Your fuse holder has failed before any of your cell connections. I have an Azub 6 'bent - not looking for half the power you have achieved (small geared hub motor). It has an underseat luggage rack, perfect mounting place for a battery.
I did build a spot welder this year with some success. To weld, or not to weld? That is the question.
Regards

6pence spot welder https://endless-sphere.com/forums/viewt ... 31&t=81274
"It is all nice and proper, but only an idiot would think that the father is sixpence to the good on the transaction." C.S. Lewis' Mere christianity
Top

This pack is flat and kind of an odd form factor. It works ok on my recumbent because I have a large shelf. Now that I know that this method is viable I am thinking about modifying it to make it a more "normal" size. I think making 2 layer thick back-to-back 6S, 4P modules would be ideal. These would be about 10"x3"x3" and each pack would have it's own balance and power connectors. These could be shrink wrapped to make them vibration proof. My 12S, 4P pack would be made more compact at about 10"x6"x3". This way if I wanted to expand it to 20S later it would be easy.

Good work man, i'm trying to build something similar for my house but i would like it to be fused and a bit more refined, would keep everyone updated as i move forward, thanks for the inspiration.


www.recumbents.com wrote:It took me about 8 hours to build the basic pack. This picture shows 12 batteries in series (one in each holder), producing 43.7 volts. The ribbon of cloth is in place to help remove the batteries as they are very tight.

I took it to the garage to see how it fits on the bike and its a bit larger than the shelf but will work fine. 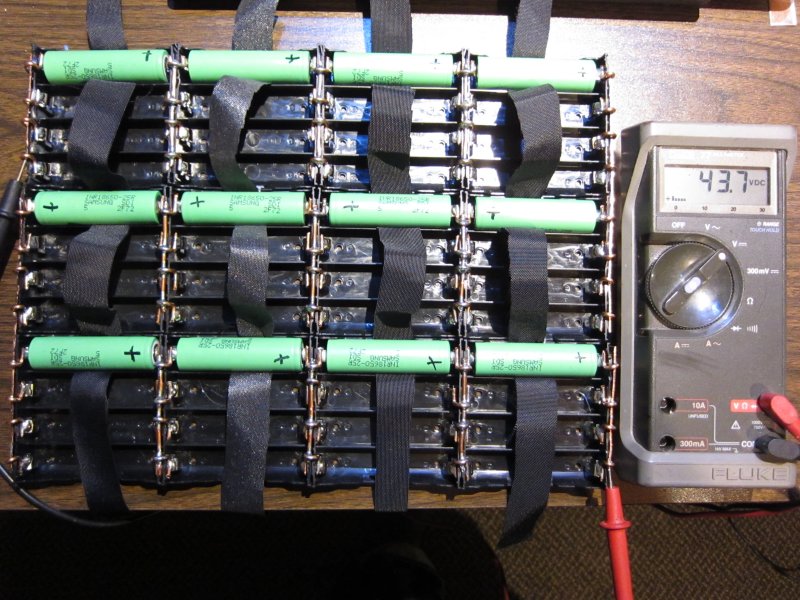 Now I need to add the main power wires and the balance wires and build the Lexan box.

This forum owes its existence to Justin of ebikes.ca
Top
Post Reply
83 posts