The 4S pack I built previously works fine but I have lost my ability to charge at work, so I need a pack that will allow a round trip, which is 15 miles with hills and lots of stops. The riding I do uses about 44.4Wh/mile. This meant that the 10Ah pack would get me to work and then die about 1/2 way home.

Samsung says 20A continuous from thes 25R cells which would mean the pack could max out at 160A, but the highest I have seen from my motor / controller is less than 4000 watts, which is pretty close to 80A, so the 80A BMS should be fine.

I now have the batteries in the packs and have made the copper interconnects and assembled it all into a pack. I'm going to make a plastic box to house it in.


Batteries were around $400, the battery modules were around $170, and the BMS was around $75, so about $645 total. That's about the same price that you can get a pre-built spot welded pack for. The advantage of this pack is that I can easily replace the cells if any of them go bad or if someday I want to use a different cell.

I find it amazing that almost 10 years ago my 20Ah "48V" Ping LiFePo4 battery that cost about the same amount was over twice as heavy, over twice as large, and only able to deliver about 20A.

A friend an I are building up a similar battery using anguism's 8p blocks but 10s to power his dual geared hub motored carbon Scott Ransom build. Interesting to see the top ES builders doing the same thing, I feel like we made a good choice. He estimates the kit can put out 50a on the bus bar so both 17amp controllers will come off the same pack.

Just need to sit down with him and make sure we put his battery together right since he is a bit new to it all. Fast learner though.
Distributing "Lebowski" FOC Controller PCB (Through hole) since 2016
Moped: Emax 110s 2009
Top

Nevermind about the current, I just watched some of their videos. Still, I look forward to see how you like them in use

Hard to find a spot welded battery using high discharge Samsung 25r cells. I believe in the way we use them they should have many cycles ( my guess ).
Top

Agnius is their creator's name

Who created Agiuns. I mean where Man come from ???? ? I was thinking I could fit a 20s 8p of Samsung 25r as my choice for 18650 format. A little big for bike. Yes I made some cardboard boxes the size I could fit them in my triangle next to each other 6 in wide. 6 in between my crossbar might feel normal as yesterday.
Top

And AgniusM is a very clever engineer. I had his first set of battery holders for the A123 cells and they worked great. I am in the process of collecting money to get a 12S set of these 8P ones for the new Sony 18650 cells. Soon, I hope.
otherDoc
E-bike stable at our house

The BMS finally arrived a couple weeks ago and now I am starting to work on the pack again. At this speed it will be done by the time the snow flies.

I'm removing all the cells from the packs and add a thin layer of dielectric to the ends of the cells to eliminate the possibility of battery terminal corrosion. The battery cells are pretty easy to remove from the pack by smacking the pack on my hand over something soft like carpet.

The cells shouldn't corrode but I did have the negative terminal on a couple 25Rs get some rust on them. This may have been because I was using acid flux to get solder to stick to my last battery pack and it may have gotten on a couple of the cells, then they sat in the garage for a couple years. I now know not to do that!

I have all the parts now, I just need to put it all together...

Here's the bms. The provided schematic was a bit lacking in detail so I labeled the board myself. 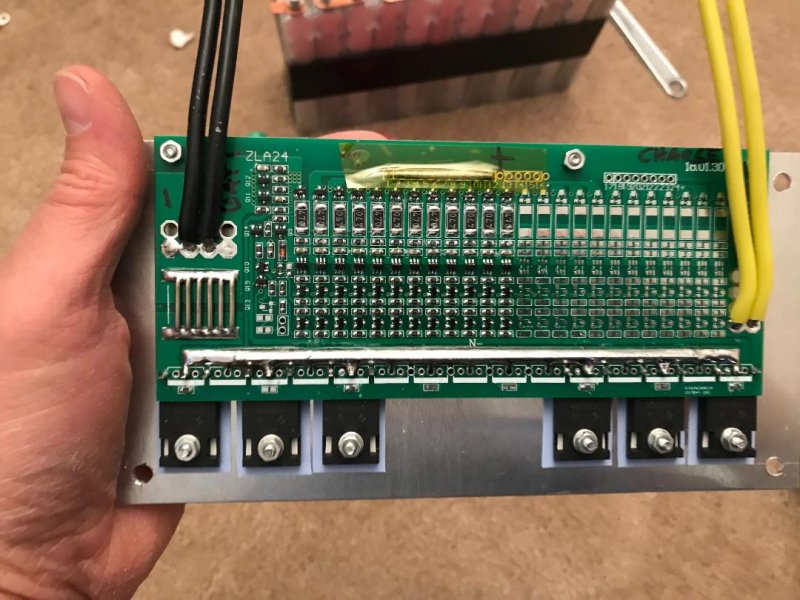 Build is proceeding slowly. I now have the battery box figured out and mostly built. Hopefully it will come together quickly now.
E-bike projects - http://www.recumbents.com/wisil/e-bent
Top

I look forward to seeing where this goes. IMHO this is more appealing than the vruzend kit in my opinion.. so thanks for being the pioneer on this one

ACF50
Thanks Justin_le we're here thanks to you. All the best to the mods for their tireless work keeping it on an even keel.
Top

Here's the battery pack in the polycarbonate box, with the BMS and CC HV160 controller mounted. The polycarbonate box is mounted to a plywood spacer which fits inside the Otivia hardshell bike box. The plywood is bolted directly to the bike rack. There's still space for commuter stuff like shoes and clothing in the Otivia box. 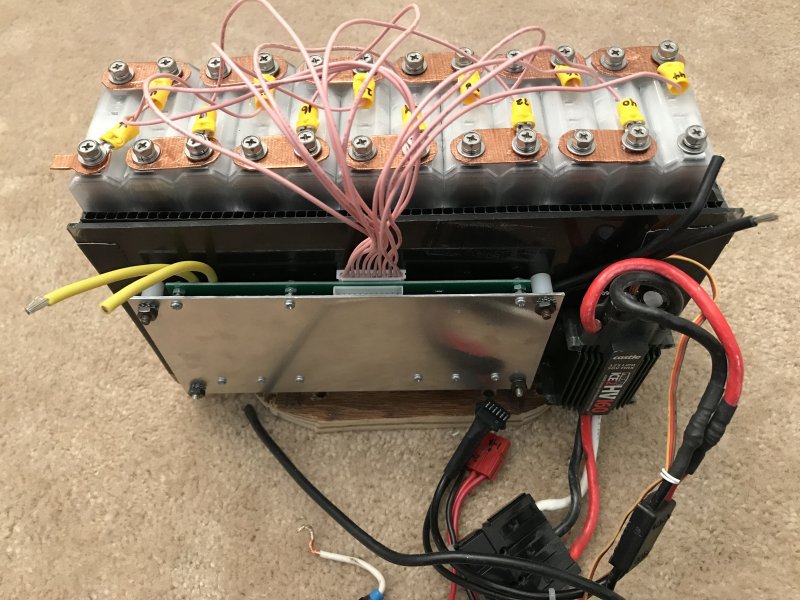 I now need to complete the wiring and mount the cutoff switch into the Otivia box. The Otivia box is something I bought long ago and never used. Looks like Otivia is long gone.
E-bike projects - http://www.recumbents.com/wisil/e-bent
Top

Here's the pack assembly in the lower half of the Otivia box, with the wiring cleaned up and connectors added. I needed to order a new cutoff switch as the bolt was corroded onto the old one and I couldn't get it to come off. Also the pack is about 1/2" too high for the lid to close properly. Arg. Oh well, I can space the hinge up a bit and it will still have decent overlap to provide some weather protection. 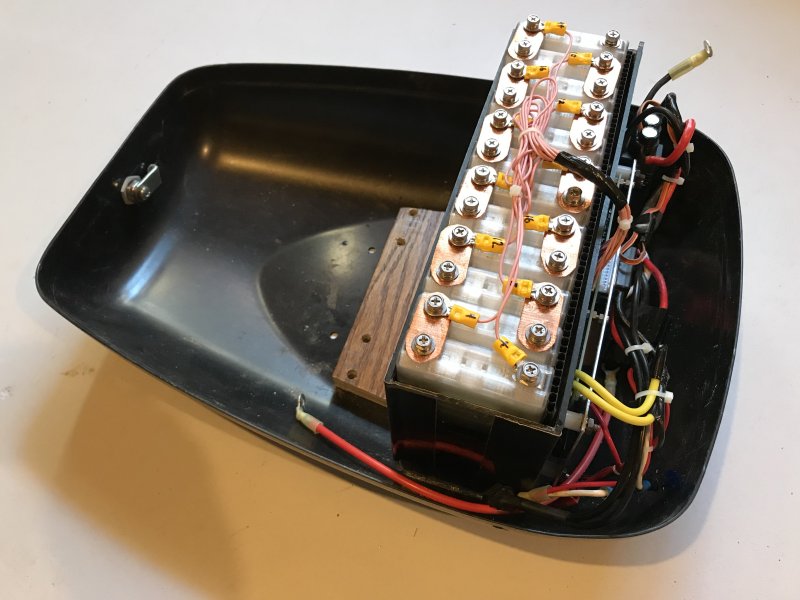 I'll need to cover the terminals with some thin plastic and gorilla tape instead of the lid I was planning.

I installed the cut-off switch last night and am ready to connect the BMS.

Half the packs are at 4.0V, and the other half are at 3.5V. Do I need to equalize them before connecting the BMS, or can the BMS handle the cell groups with a 0.5 volt differential? It's so close!

Yes the bms is to keep a balance pack in balance. So get all to 4.0 v. Why over work a brand new bms.
Top

Ok, thanks. Hooked up the old trusty LiPo charger and after figuring out how to work around the fact that the low battery voltage caused it to think it was charging 5 cell groups instead of 6, it is charging away.
E-bike projects - http://www.recumbents.com/wisil/e-bent
Top

I thought the goal was to individually charge the 3.5v packs to bring them up to 4.0v to match the rest...
My Ebike builds - Existing bikes, affordable motor kits, self built 14s6p batteries - Now with more recumbent!
Top

You are correct, sir. I had a 6 cell groups in series that were all 3.5V and had to bring them up to 4.0V (24V total) to match the remaining cell groups which were already 4.0V. I used a 6S LiPo charger to do that, and even though I was "bulk charging", they all charged to 4.0 volts.

I connected the BMS after checking the voltages on the connector again. No smoke!

Next step is to bolt up the battery to the bike and let 'er rip! Maybe tonight!

Mounted the battery pack to the bike with the u-bolts and connected the wires. 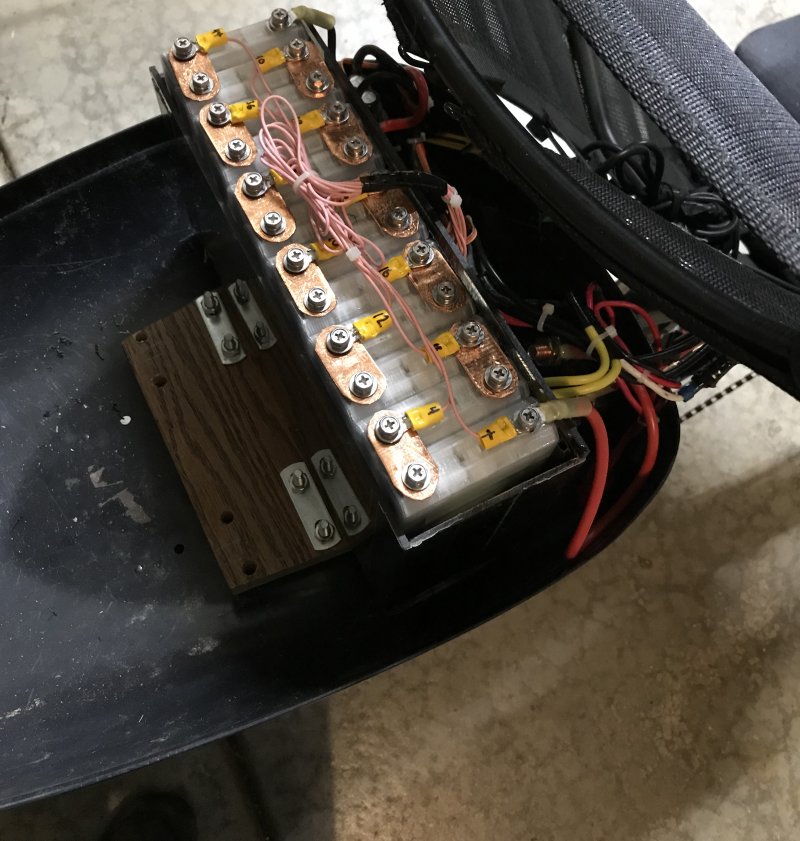 Everything seems fine, cycle analyst says 47.4 V which is a bit off of the 48V it should be. 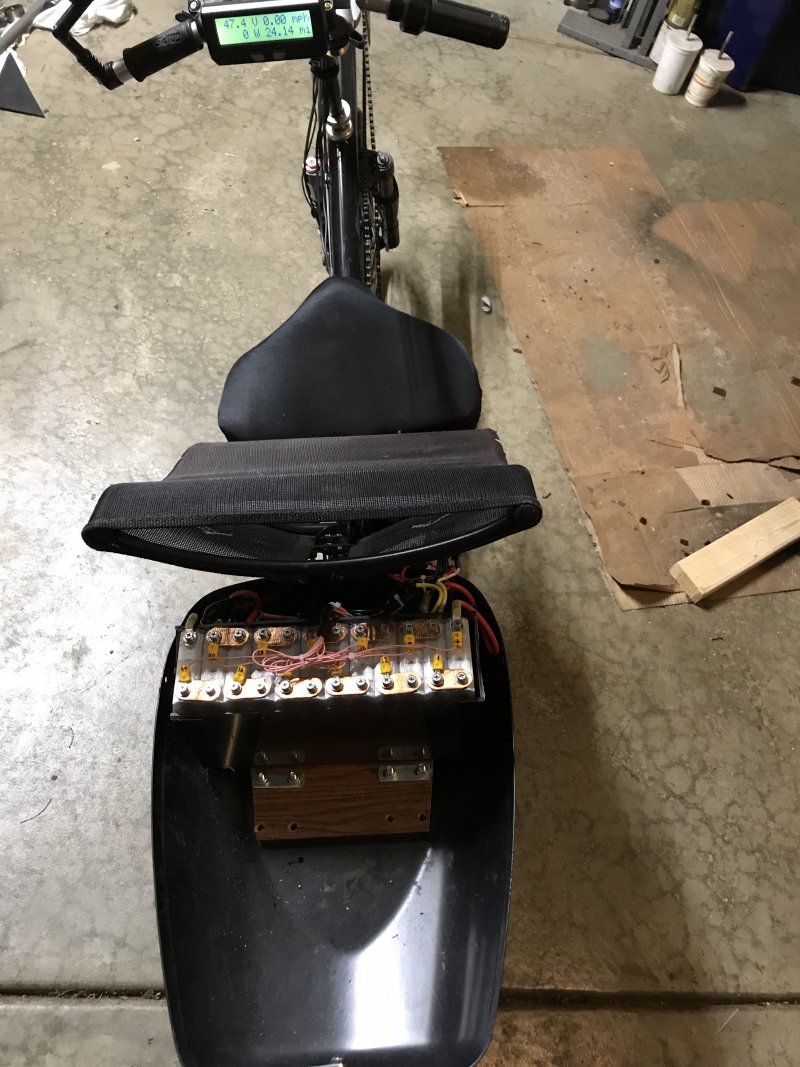 Took it for a spin around the block with lights blazing and pedestrians scattering. 40MPH before I throttled back. Whee! Cycle analyst says 85 amps max which is about what I estimated. 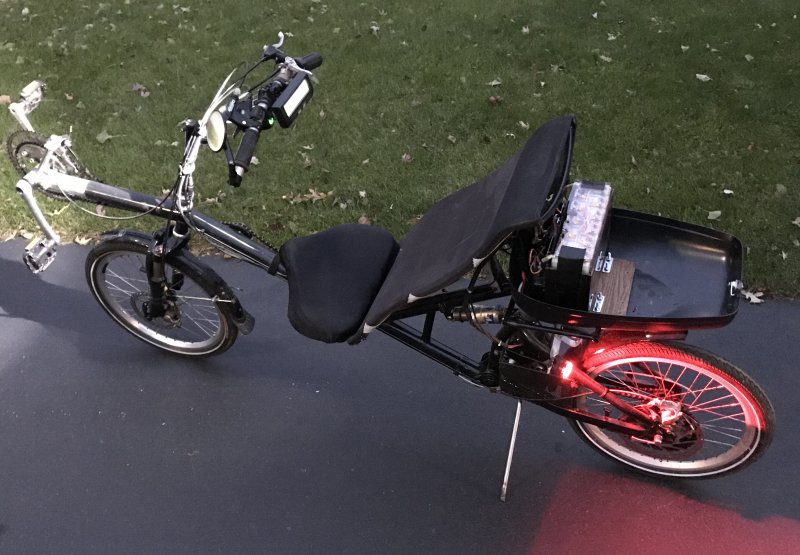