Now this is some very very good news!! 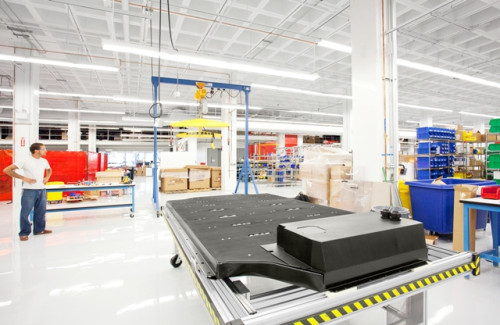 Tesla 'gigafactory' to employ 6,500, cost $5 Bil
SAN FRANCISCO (MarketWatch) -- Tesla Motors Inc. (NASDAQ:TSLA) is looking for sites between 500 acres and 1,000 acres in Arizona, New Mexico, Nevada or Texas to build a giant battery factory, which could cost as much as $5 billion, the electric car maker said in a regulatory filing late Wednesday. The plant would open in 2017 and employ about 6,500 people. It would reach full capacity by 2020, enough to supply power for 500,000 cars a year. "The Gigafactory is designed to reduce cell costs much faster than the status quo and, by 2020, produce more lithium ion batteries annually than were produced worldwide in 2013," Tesla said in its blog. Shares of Tesla ended at a record $253 Tuesday, up 2%, and traded 1% higher in after hours. The company also filed to issue convertible senior notes due 2019 and 2021.
Top

http://www.teslamotors.com/sites/defaul ... actory.pdf
Yellow Magpie - Home Of The Talented And The Interesting

How About This from Tesla. Sure hope we can profit. What are our chances here? We need someone from here to interface with tesla since we would not be competitors I would think.

Tesla Motors is planning to announce the world's biggest battery plant for the US this week, a plant so big that chief exec Elon Musk is calling it the 'Gigafactory'.

The electric car-maker has had ongoing problems with ramping up production of its Model S and X vehicles because of a lack of steady supply of batteries from its main partner Panasonic and other firms.

Shortages in supply have frequently delayed promised delivery of cars and prevented the firm from taking its production lines up a gear.

To combat this, Musk is planning an American battery factory that will make batteries from raw materials instead of components, lowering its costs.

As Tesla will be partnering in the plant, batteries should come off the line fit-for-purpose for existing Tesla cars and any future models the firm plans on.

Musk told analysts last week about the potential for the factory, but without going into too much detail. Today, the Nikkei newspaper in Japan said that Panasonic, which is in talks to partner with Tesla in the factory, was on a shopping trip for other Japanese suppliers who might like to invest in the plant. The newspaper claims that the investment for the factory is expected to reach more around $1bn.

Shares in both Panasonic and Tesla have been boosted by the new factory chatter. Panasonic stock gained 5.27 per cent in Tokyo today, while Tesla shares jumped nearly 14 per cent yesterday and had gained another 6.5 per cent in early trading today. ®
bikeboy-silence is golden
ezip trailz dual24v10ah sla and/or ductape24v10ah lifepo4
Top

Tesla in the news again:
http://seekingalpha.com/article/2054153 ... ga-factory
ES changed my life (for the waaaaay better).

Hopefully it will bring down battery prices for everything. Another thing I was reading is it's going to produce as much battery kwh as the rest of the world combined.
Top

lester12483 wrote:Yep, this is very good news for EV and solar industries.

What the Solar industry really needs is better, cheaper, more efficient , PV panels.
IE:..you have to generate the energy before you can store it !
This forum owes its existence to Justin of ebikes.ca
Top

yea i saw the post on tesla's twitter feed today, i was so hyped. I hope tesla succeeds and their factory thrives, for my own selfish personal reason of course

. imagine powerful batteries for our ebikes at great prices in the future

Really hope the ebike community can leech and benefit from this

Why Oh Why did he not take over A123 instead of letting the chinese have it.???
bikeboy-silence is golden
ezip trailz dual24v10ah sla and/or ductape24v10ah lifepo4
Top


He needed competent engineering and manufacturing.
Each carcinogen vapor exposure includes a dice roll for cancer.

I sure wished he'd taken over bankrupt A123 . Why didn't he ???
bikeboy-silence is golden
ezip trailz dual24v10ah sla and/or ductape24v10ah lifepo4
Top

He was already committed to the Panasonic contract for 18650 supply when A123 crashed.
This forum owes its existence to Justin of ebikes.ca
Top

I'd prefer if Musk spent his well earned millions into faster LiS progress besides his new shiny factory.
Just imagine 500Wh/kg 18650 cells knocking on your door.....and cheap to as Sulfur is almost free!
Efficiency is king!
Top

Agree, take care of the current business and invest where the future is showing promise. The LiS looks to be very promising on a host of issues. It could be a game changer.
C-dale Jekyll Bad boy ultra http://endless-sphere.com/forums/viewto ... =6&t=51830
Top

I'm assuming this would include infrastructure to harvest the resources to make the batteries without having to import them from abroad? A railway to and from the plant would probably be planned.
Surly Ogre rigid 29er, rear 10T MAC @ 50V 25AH & 40A: 30mph road/gravel/hill machine
42" dual diagonal Eskateboard @6s & 90mm wheels
Next: eMTB @10-12s & 8"-12" pneumatic wheels; Got Strapped? d-(',')z
Top

I admire this move. If tesla wants to release the model e at the volumes they're predicting, they had to do this. They can't even get enough batteries to meet demand of 30,000 model s's per year. This is putting a date on one of the biggest turning points of modern mobility and new technology. The output from this plant is staggering and really makes possible electric cars being mainstream as well a smart grid technology to better utilize wind and solar power(plugged in cars can act as the costly storage banks needed for large scale wind/solar).
Top

It's old news now to a lot of us but I didn't even realize until today that Tesla had officially confirmed their intentions to construct a giga factory via the Tesla blog. In the blog post, published on February 26, they offer a brief overview of their plan:


As we at Tesla reach for our goal of producing a mass market electric car in approximately three years, we have an opportunity to leverage our projected demand for lithium ion batteries to reduce their cost faster than previously thought possible. In cooperation with strategic battery manufacturing partners, we’re planning to build a large scale factory that will allow us to achieve economies of scale and minimize costs through innovative manufacturing, reduction of logistics waste, optimization of co-located processes and reduced overhead.

The Gigafactory is designed to reduce cell costs much faster than the status quo and, by 2020, produce more lithium ion batteries annually than were produced worldwide in 2013. By the end of the first year of volume production of our mass market vehicle, we expect the Gigafactory will have driven down the per kWh cost of our battery pack by more than 30 percent. Here are some details about what the Gigafactory will look like.

The details are covered in a pdf they link to. Interestingly, the production flo-chart in that pdf seems to insinuate that the factory will produce traditional can-cells, something that has been hotly debated on these forums. However, the insinuation could mean nothing. Here is the link to the blog post:

thanks. pretty weak on the details, looking more like an investment promotional than anything. hard to imagine that since the Chinese control 95%+ of rare earth mineral productions and already very well established in lithium-ion battery production, that Tesla will pull it off in anything like the time frames that they're proposing. Sill, hope they pull it off and manage to establish full production supply chain to finished product here in the good'ol USofA. Now if it were A123 making claims that they'll secure such a share of the market, I'd be credible.

http://www.oled-info.com/japanese-resea ... -materials
even our light and displayes will get rare earth free
Top

Which doesn't apply to AC motors.

The US has unearthed a large supply of lithium which will probably be replaced by a better material in the long run. The largest source of lithium, more than half the world's supply, is in Bolivia.

It will be interesting to see what happens the world's economies when China crashes any day now. That's the only well-foreseen thing that can derail Tesla.

Oh, that and the Europe/USA going to war with Russia over invading the Ukraine. Not because Russia are good at wars (far from it) but because they possess a huge nuclear arsenal and are run by a narcissistic dictator.
Yellow Magpie - Home Of The Talented And The Interesting

Chinese companies have been scouring the Tularosa Basin, because it has possibly one of the largest neodymium deposits in the world.....

http://theenergycollective.com/rockykis ... rt-bio-gem
Of course, i want to drink the fresh water and better yet irrigate my vines with it...lol
ES IS SAVED! THANK YOU JUSTIN.
Top
Post Reply
448 posts