Use this forum to post up events, rally, conventions, get-together, etc. for anything related to the e-vehicle world (e-bike, car, motorcycle, etc). Guest may post replies to topics without the need to register. All topics here expire after 1 year of inactivity.
Post Reply
230 posts

I thinking of dropping by on Friday for a bit if anyone is going to be there. I'm on my way to Ventura to look for a house to rent since I landed a contract job there.
Fundamentals United, Inc.
Top

Congrats to Will (SoSauty) for his 3rd place showing this last weekend. It looks like only about 25 riders showed up. I had other obligations over the weekend, so unfortunately could not be there. It looks like these Shuttle Buddy guys showed up for this one and cleaned up pretty well. I'll be at the next one, I'm not letting those guys think they are faster than electrics!

Missed 'ya Dave. I charged up a passle of 6S lipos and had 'em handy for you at Grange. You had best clomb on to those lipos soon, I started to chunk the $750 lipos into the dumpster at Grange but hesitated. The 10 lipo bricks have negative value to me, just taking up room in my smallish work shop.

There were +-39 bikes. MBR went with simplified scoring, thank goodness, and the DNF's didn't get counted. 11hp class turned 1m:18sec fast lap; 2stroke 1m:23s; mid4stroke 1m:24s; and <50cc 1m:27sec. The 25cc shuttlebuddy's were surprisingly swift, would've lapped the typical <50cc <2K electric, which is why I support racing by top speed (thus enter Ryan's dyno). The entry level street class has been predominatedly 35cc SubaruRobins, then next race mo-peds, next race stock ChinaGirls, last race shuttlebuddy & nuvinci drive. Too many changes from race to race and a hassle trying to adjust to those.

The mope guys, along with shuttlebuddy http://shuttlebuddy.com/ team of ?5 kept the sport alive to race another day. The 2 bikes in front of me were a mo-ped & a honda cycle with a pedal kit that the shuttlebuddy team sells. He rode his little cycle single gear (3rd). I had a stutter in my 9Cont pulling out of turns, but hit 43-4mph in the straight. Lots of folks talking about building and running in the mid-size4stroke. I like it because you can still pedal out of corners, the bikes look clean, classy and functional enough to take fun rides on.

some videos of the race on that moped guy's channel...

Received an email of a new post in this thread, but when I get here there is none. That means it was probably spam and already removed. Thanks to the mods for all your hard work!

Have a great holiday folks. Weather here on the West Coast is a bit wet for ebike events. If anyone sees anything related please post in this thread.
-- Alan [w6akb]: CroBorg SuperCommuter, RidgeRunner, Bonanza2WD, EbikeE, AlansEbikeSite
Top

Yes, in the 24 hours prior to today, well over a hundred spammers registered, in bunches. A number of them posted dozens of spams in just minutes before being nuked, and some just spammed in their profiles, and got nuked before they could post other spam.

Today there were only 9 more so far Im aware of, after Justin chnaged some of the signup stuff to make it a little harder.

Apparently there's a huge wave of new spammers out there, most likely spambots infecting computers as a virus, given reports I have had from friends with lots of new computer problems in the last few days, and the large variation in IP addresses (making it impossible to just nuke a range and stop the problem).

Other forums are having the same or worse problems, an upsurge of ten to a hundred times the usual.

Close enough to -methods and LFP to where they could be 'shamed if they don't show.

Even though he types a good line... I figure that Patrick might be a bit shy.

Take it easy... but take it. (Woody Guthrie)


This Friday May 3rd, Jim Turner, the President of Optibike at ELV Motors, Inc will be doing demos of the Optibike between 3 and 5 pm. www.optibike.com/

You can download his book on electric bikes for no charge.

We will have also have demos on the new Neo bikes from eMotion. http://www.emotionbikesusa.com/

It's happening this weekend.

Hey anyone on here that wants to head up to SF to see Maker Faire from the greater L.A. area? I'm looking for someone to split the driving/gas with me. We can take my car or yours.

Looking to do a quick trip there and back, maybe leave first thing saturday morning and come back late that evening or stay there if we can find a place to crash and come back sunday.

We are local so no help, but we may get to the Faire on Sunday. I'll be the guy with the Nikon.

I might be there with the juiced riders ODK cargo bike. What time starting event?

I will have to attend the union meeting tomorrow at 8:30am for the discuss possible have the UPS strike.

Hopefully see you there after the meeting.


Alan B wrote:We are local so no help, but we may get to the Faire on Sunday. I'll be the guy with the Nikon.

Thank you Justin Lemire-Elmore - You are a HERO!

The Corkscrew is waiting for you.

Speed Ventures will provide track time and basic performance driving instruction for drivers of electric cars and riders of electric motorcycles for only $30 per vehicle. The event is open to the new wave of Electric Vehicles (EVs) as well as to electric conversions and purpose-built all-electric race cars. Owners of electric vehicles and motorcycles can participate in open track sessions and compete in the SportElectric Time Trial which is classed for production vehicles, conversions, purpose-builts and prototypes. Competition is expected to be fierce again as the Fastest Electric Vehicle lap record has been reset at each of the past 4 REFUEL events.

For 2013, the REFUEL Clean Power Motorsports Event will offer the following:
Drive your EV, Electric Motorcycle, or Electric Kart on Mazda Raceway at speed and receive basic performance driving instruction
Participate in the SportElectric Time Trial to see who is the fastest EV driver at Mazda Raceway Laguna Seca
Drive your EV on the free EV performance test course (Autocross style)
Rendezvous with hundreds of EV owners and fans during the EV Owner’s Meet
A Parade Lap on The World Famous Mazda Raceway Laguna is open to all EVs in attendance (low speed, passengers are allowed, no helmets required)
Free charging stations for REFUEL track and Time Trial participants. Limited charging stations are available for all other attendees.
ABOUT SPEED VENTURES

In just over a decade, Speed Ventures has become one of the largest recreational motorsports organizations in the western U.S. introducing thousands of drivers to the sport of road-racing at events held year-round on the best tracks in California and Nevada. Speed Ventures provides practice and test days, instruction for beginners, time trial competitions and wheel-to-wheel racing. Speed Ventures also hosts corporate and media events and partners with a number of other racing organizations.

Ill have the e-motard there

Just noticed this, is Tomorrow!

Alan B wrote:Just noticed this, is Tomorrow!

I will be racing a silly quick electric racecar at Laguna tomorrow.
Each carcinogen vapor exposure includes a dice roll for cancer.

Yes, feel free to put summary details of your event on here. A lot of folks subscribe to this thread, so they can see things that pop up without having to search the threads all the time. I collect stuff when I notice it but lately have been busy and not watching as much.

desperate for news, i did a little searching on 'refuel' and found some pics by the 'elon musk fan club'

and in one shot, is this luke's dream EV up front? 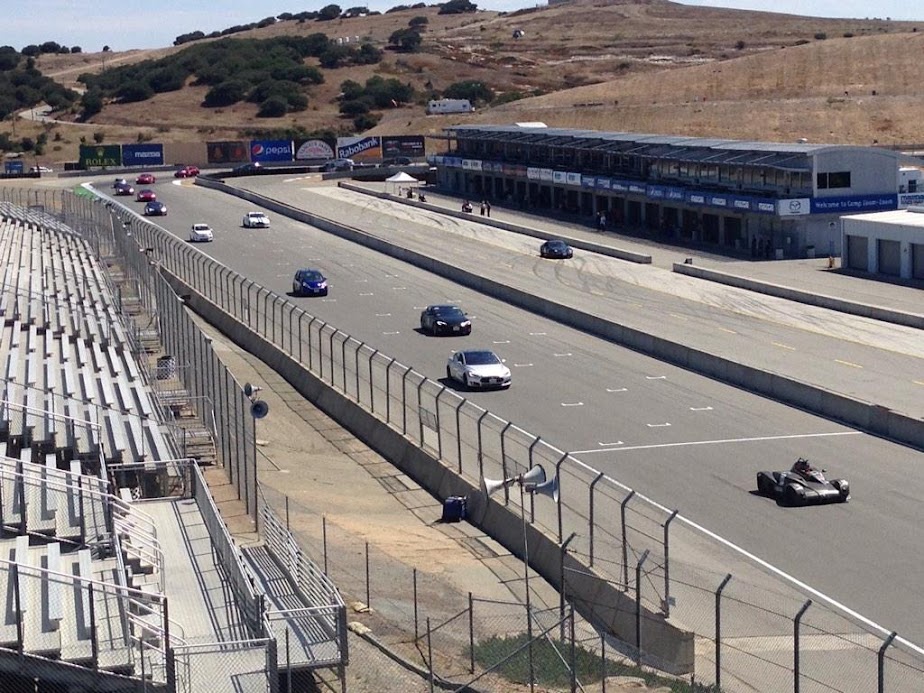 If the white car is what you see out front, you need to stretch the page window a bit because there's more pic to the right. Or you'll see the whole thing at the link.
Any sufficiently advanced technology is INDISTINGUISHABLE FROM MAGIC!
- Arthur C. Clarke
Top

This is an electric car show and a world record attempt for the largest parade of electric vehiles. You can sign up to enter your electric bike or electric car at this website below.

This annual event is special to me because this is where I was introduced to electric bikes about 5 or 6 years ago. They had an "L" shaped track with 6 to 8 electric bikes available to anyone wanting to try. I must have tried them all and a few I rode 10 or 20 times. I loved how quiet they were and that free riding feel I got. I was also impressed that with all the riding I did along with everyone else, I only saw one bike on the charger. The rest just kept going and going and wouldn't quit.

Anyway, I try to go every year. Each year they do something different but they always have an electric car show where people show their vehicles and answer everyone's questions.
Top

GCinDC wrote:desperate for news, i did a little searching on 'refuel' and found some pics by the 'elon musk fan club'

and in one shot, is this luke's dream EV up front?

anybody have anything else?

Ebikes allowed (with a few rules)