This open source project is finally ready for release!

This firmware is intended to replace the original Bafang firmware on the BBSHD motor controller and can be flashed using the standard programming cable. Almost all functionality of original firmware has been reimplemented and more special features
has been added.

This firmware is compatible with all displays that works with the original firmware. A custom configuration tool is provided since BafangConfigTool is not compatible due to a different set of supported parameters.

NOTE:
The release contains two different firmware files, one for 1.4 and one for 1.5, you must flash the correct version or it will not work.

Do not flash on any other revision without access to the original firmware (for that revision) to restore or you may brick your controller. If you have a bricked controller of an older revision, please proceed and let me know of the outcome.

It is a good idea to have access to the bafang original firmware files in case you want to roll back for any reason.

Highlights (v.1.0.0)
Limitations (v1.0.0) Since this is an open source firmware alternative the possibilities for future improvements are endless, if you have any suggestions, just let me know.

Configuration Tool
To give you a hint of available options. 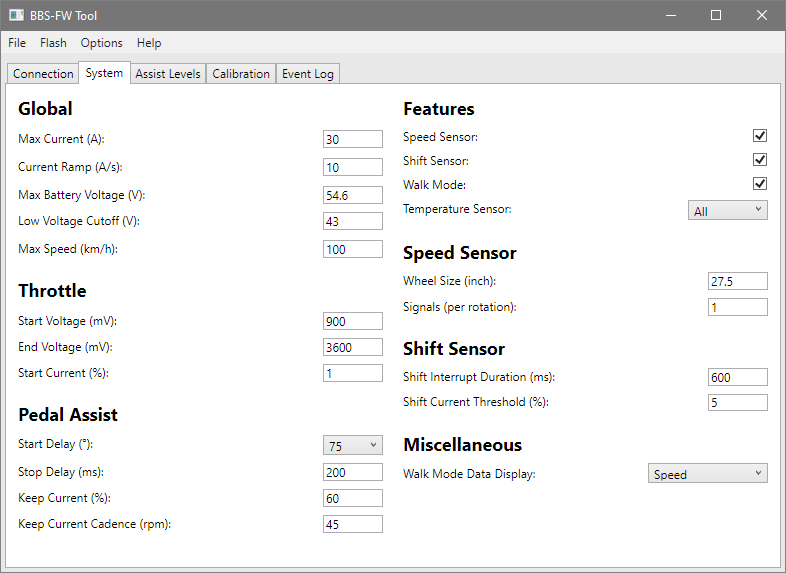 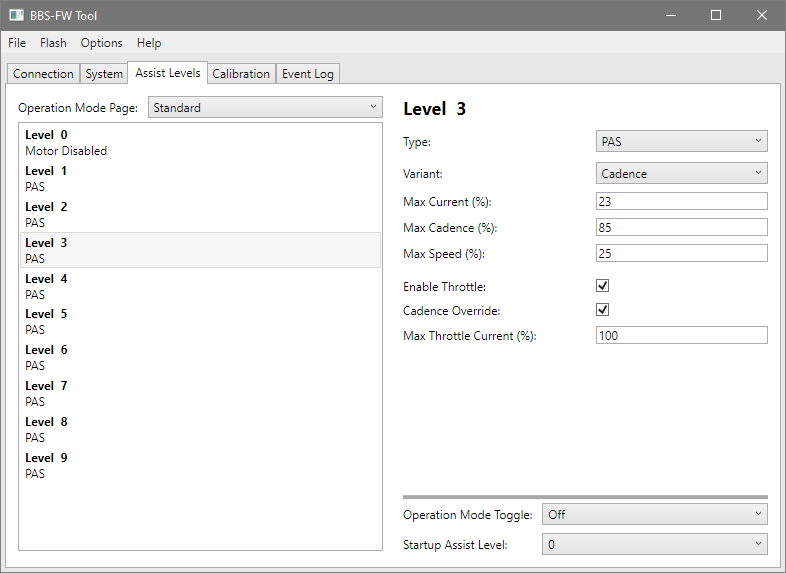 What a great contribution to the community, Thank You!!

Sorry if an obvious question, is this using true FOC?

Basically the BBSHD controller has two different microcontrollers where one is only focused on doing BLDC control and the other does everything else. The communicate with each other through a serial line.

This firmware only replace the firmware on the "everything else" controller. The other one cannot be flashed without taking the controller pcb out of the housing and removing some of the potting on the bottom.

It is something that is on my list to investigate if it would be possible to provide an optional firmware for this MCU too, but I have not put much work into it yet. It is sort of a rare MCU and there does not exist a cheap flashing device for uploading software.

This is what I got:

Development environment that could be used in "evaluation mode" which I believe is enough:
https://www.renesas.com/us/en/document/ ... 0?r=488821

Here is a project which seems to be able to dump the flash to extract original firmware:
https://github.com/AndrewGBelcher/78K0R_flash_leaker

It also seems to implement more of the programming protocol and could potentially be used for programming the chip.

Also, I have access to source code for an implementation on FOC on this exakt microcontroller (no idea about the quality) which I found a while ago.

I might give this a shot someday, if I can get a shell project running which works and can be flashed I'm sure there are a lot of folks here on the forum that could help with the BLDC control firmware.

Edit:
Upon further investigation I believe UFD79F9211 has been rebranded to UFD78F1000 by Renesas. The have the exact same architecture, memory map and pin layout. Hopefully the tooling provided by Renesas will produce binaries targeting UFD78F1000 that also works on UFD79F9211.

Edit2:
I have looked at the controller PCB and there are no current sense resistors for any phase phase so we cannot due "true FOC".
The MCU that runs the BLDC control can measure battery current and battery voltage.
This will put us in the same situation as TSDZ2 firmware which implements a simplified form of FOC i believe, based on a motor model and the measured battery voltage and current? Which I guess we could to for the BBSHD/(BBS02 eventually) since is just has to work with two different motors.

I know very little about BLDC/FOC etc at the moment, if I messed something up here, please correct me.
Last edited by danielnilsson9 on Jul 29 2022 9:00am, edited 1 time in total.
Top

This is absolutely fantastic news!

As a BBS02 owner I sent 10$ donation to help you get BBS02 controller.

I encourage everyone who owns BBSXX to do the same whether it's to support BBSHD developent or to speed up the release of BBS02 version.

Can anyone expand on how the "No Display" would work? How would you select PAS levels etc?
Top

Great work! I'll have to check it out. I sort of hate messing with my BBSHD since it's running nicely now, but it has a couple of the known annoying issues.
"One test is worth a thousand opinions"
Top

This is supurb. Already donated $10 for this guys hard work. This is what the bbshd needs, custom fw!
Top

You won't. You only have on level, you startup assist level selected when configuring the firmware. You can do the same with the original firmware really. It is mostly useful when running a throttle only setup, but it would also work with the "variable PAS" mode where you set assist level power using the throttle but still have to pedal to receive the power.

On another note, has anyone tried running this firmware with a gear sensor? I the power gap wide enough for smooth shifting or does it need to be tuned for a nicer experience? I don't have a gear sensor and haven't tested that function.
Top

63V support opens door to 15s li-ion batteries without modifications? That should make some happy. With maximum of 32A current enabled, that would be equal to 1700-2000W range. I have no idea about how efficiency would get affected by this though.

By the way I don't see anything about gear sensor in "Limitations", I guess it works.
Top

Anyone have a photo of what the display would look like with this firmware, maybe even with a bafang 860c? I too have been very happy with my current firmware, even did the shunt mod to 45a (which I assume wouldn't cause any problems with this firmware other than reporting the wrong amps like currently it does) but I do like how this will show the temps. I already put a thermistor on the controller side but having it built into the display would be nice.
Top

Looks like a great mod. Well done.
I'd love to see a setup that uses a hidden switch to toggle the entire display to show a 250w street legal setup (Australian nanny state law) so that when the cops show up to inspect your setup it deceives them into thinking its all good!

) Slap a 250w sticker on the motor as well. But for normal ops one could revert back to the standard setup.
Top
Post Reply
12 posts • Page 1 of 1