I couldn´t resist this little nimble thing. Got it for for 270$ 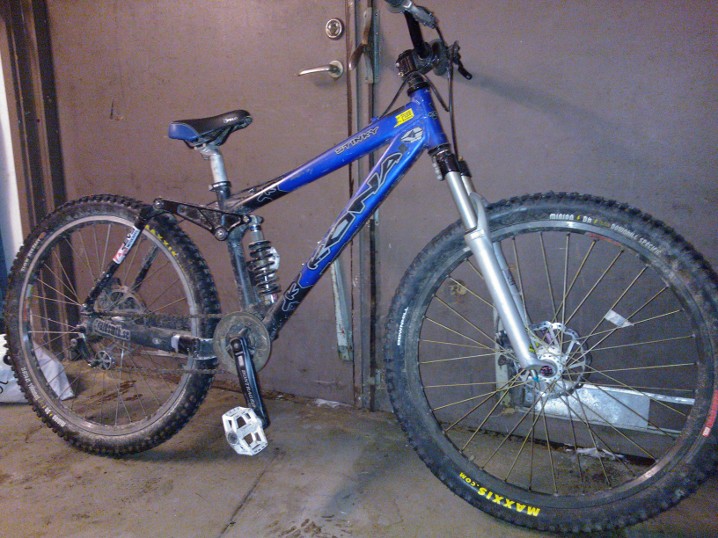 GNG will be ordered through aliexpress.
Last edited by christerljung on Dec 12 2012 10:17am, edited 2 times in total.
GNG Kona stinky.
GNG Scott Gambler, no pedals.
Top

Yup. I'm just waiting for one to show up in a "for sale" section in my area

Nice find. Might be my eyes, but it looks like the rear brake rotor is larger then the front.
Silent speed Racer
Top

The pic is a bit strange, 26" both rear and front. Thats perfect now because winter spike tyres are most 26"
Yes rear disc is a larger one. Dont know if thats the original one but nice anyway.
GNG Kona stinky.
GNG Scott Gambler, no pedals.
Top

Re: third GNG - The Kona Stiny

This Kona frame is really tight at the BB and swingarm mount. Had to file off the GNG-mount a little. 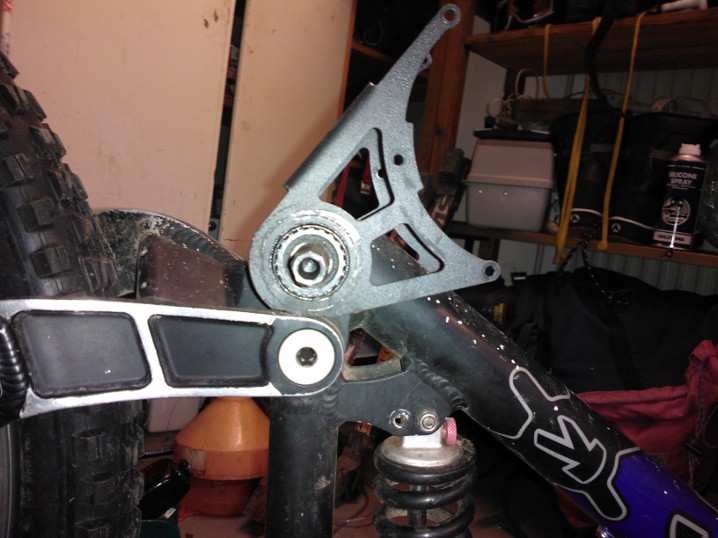 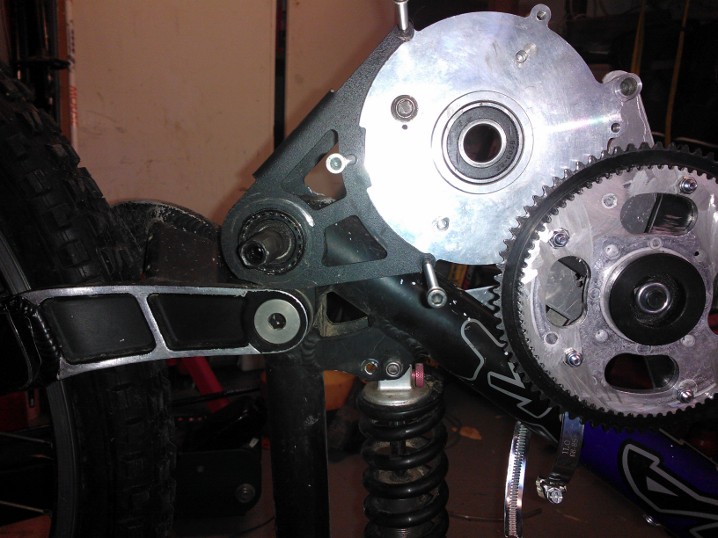 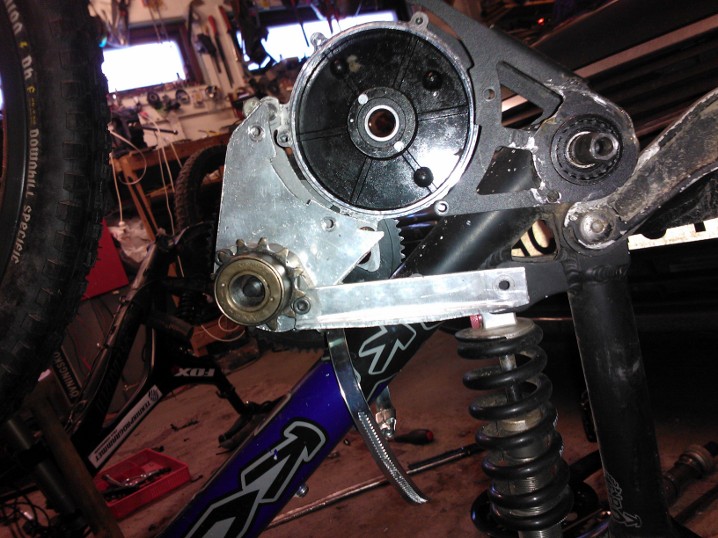 The perfect frame for a torque strut mount. The lower shock-mount extra hole is in the exactly correct position.

This weekend is dedicated to a chain encapsulation. The first reduction of the GNG is getting full protection from dirt, water and snow. Also it will be easier to keep it with plenty of grease and some protection if it jumps. 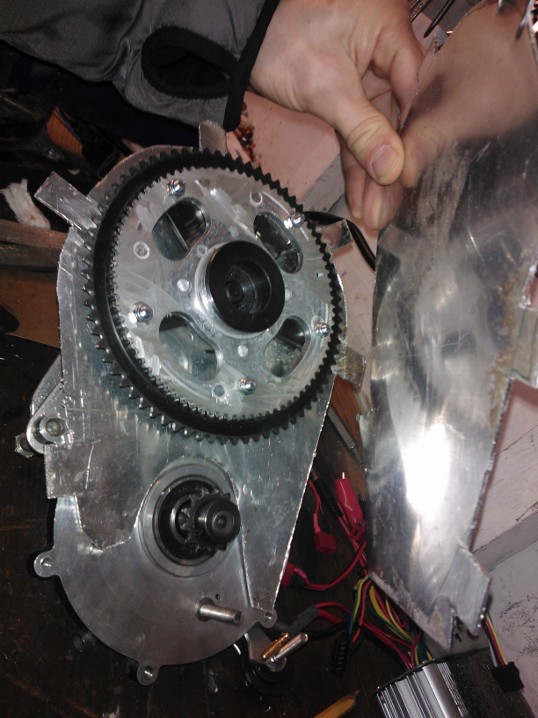 Great! that fast progress! finally someone takes me as an example

chain encapsulation sounds great. how will you make it? fiber glass, epoxy glue and polystyrene as a model?

Yeah, i like it fast. Beauty can wait, let´s have fun now

It´s a simple solution with alu and plastic sheet from a cuttingboard. 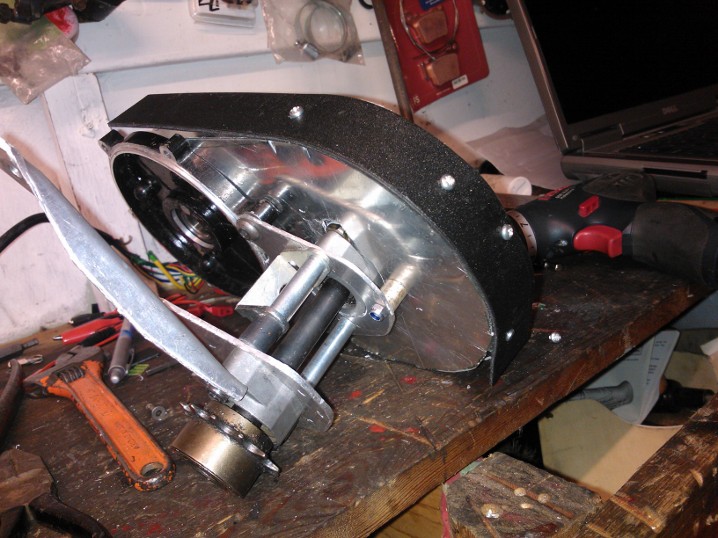 Very nice, watching this one with interest.

Finally some progress. Batterymount is finished and next thing is to try the adjustable sheets together with my chainencapsulation.
Thanks for those fantastic sheets, Lighteningrods!!
Notice the upsized cranksprocket, 48t. What topspeed will that give with 24S

any reason you bought off aliexpress? better price? i can't seem to find it
Top

Wow! 3rd GNG... then again, I am considering a second.

A little progress again. Got the cassette, derailleur and some other parts from CRC today.
Trying to fit the 48t ring on the exisiting GNG-chainring:

On my build, the inner chain ring was already quite close to the hex bolts going through the motor mount bracket. Hopefully you don't run into any clearance issues there.
¯\_(ツ)_/¯
Top

Edit: Ok, that's BS, since I see you install a larger final drive chainring? Why do you do that?
Since it seems like you dont pedal anyway, it should even LOWER both torque and efficiency?!?!

for your needs a 36T final drive chainring would fit a lot better, you still use your 74V/20s lipo battery, do you?

OK is see you even want to use 24s lipo. That absolutely makes no sense at all. You will waste most energy to eddy current parasitic loss. The motor is made for 72V MAX for a reason.

If you want more speed, then you need more current, since your setup never runs into the good efficiency region.

But now that you own this setup: It would help a lot, if you could measure no-load current @24s lipo. this way we could see how much eddy current loss rises in fact!

I´m aware of the eddiecurrent problem. It´s easy to reroute the wiring for 72v if 88v seems bad.
This is a realworld test is to see if these "eddies" will be a obvius loss i accelleration at higher rpm:s. Or maybe it isn´t?
Even if there is a loss it would be nice to have a motor able to pull, both at low trail climbing speed (no losses and good torque, we already now that the GNG has massive torque), and HIGH speed ability. That´s what i meant in the GNG-thread, where you showed the diagrams. At first i didn´t realize that the diagram was without eddies.
It´s always better to make watts out of more volts. More amps gives more heat, thicker cables, thicker windings and so on. But ofcourse high voltage also got it´s problems.

Tonight i did finish the back drivetrain. A cheap Acera mesh will do the shifting. I liked the stable and big cage-wheels of this derailleur. But the angle of the shifting-cable is horrible. Not for off-road use.

Edit: Ok, that's BS, since I see you install a larger final drive chainring? Why do you do that?
Since it seems like you dont pedal anyway, it should even LOWER both torque and efficiency?!?!

for your needs a 36T final drive chainring would fit a lot better, you still use your 74V/20s lipo battery, do you?

Since the first reduction in this setup now is a 12/72 chain-kit, i got 6:1 reduction.
The 72v setup did never need to use the 20 - 34 coggs in the cassette, so thats why i want 48t finaldrive chainring. This will also help pedal cadense at >50kph. Ideally the chain would almost never need to use the smallest gears in the cassette, since these will be worn out too fast.
48t maybe was overkill, 46t would been more reasonable. My dream is to test this setup on the sea-ice soon. The first GNG above 100kph?

Great that you did not fix your battery voltage. Can you measure no-load current at 88.8V for us. I'm waiting keen to see this figure!

The graph below just looks too good to be true

made some calcs about your setup. Seems like 100 km/h is out of range. Power is just too low. Needs a second GNG

crossbreak wrote:Great that you did not fix your battery voltage. Can you measure no-load current at 88.8V for us. I'm waiting keen to see this figure!

The graph below just looks too good to be true

made some calcs about your setup. Seems like 100 km/h is out of range. Power is just too low. Needs a second GNG

Finally i got it out on a little test.
I´m still on 18S 72 volt, need to re-program the controller before we fly on 88volt.
Anyway, i had some fun before the motorpulley was sliding on the shaft. Never got those setscrews in good thgtened way, it´s some strange size of the screw that i didn´t have the right tool for.
Was afraid that the gearing with 48t final drive would be too high, but in the big 34 cassette ring it felt really nice for some lounge-riding. Never had it in the high speed gears since i had to walk it home when the motorpulley said: stop.

I had a brutal ride yesterday. Got the controller configured for 24s 95A phase current and 65A rated. Also added power levels. I never got to open field to try full throttle at max power beacuse the chain jumped and destroyed the 52 chainring. The chain jumped at no power but a little jump when i was in the lowest gear (11t). Probably my homemade chaingudie wasn´t tight enough. Power was insanely brutal. CA was reading 100volt and 50 amps. It felt totally out of control. Gonna look for the magura/denisesewa throttle setup. And of course a professionally made chainguide.

Made some more tests today.
Added a mud and waterprotection coat. Really ugly but all things (battery, motor, chains, frewheels and gears) are totally protected.
The freewheel was in the beginning of unscrewing itself so i added a little welddot to it.
The phase current was set down to 30A ,was 95A before. I just wanted to feel the difference.
30A Feels almost soft and lame. But there is just enough power to make a wheelie.
95A Is furious.
40% power in lowest power mode(out of three) gives ultra-slow creeping speed. Really stealthy and fun in the woods.
The gearing with 12/72 ,12/48 and 48/ 11-34 is absolutely great.
Another thing to notice is how silent the #25 first reduction is. It's maybe even more silent than the original belt.
The Kona original rockshocks fork is awful, probably needs a rebuild.
Kona frame feels nice for slow trail. Good low gravity balance with this setup. A little nervous in higher speed.
No possibillity to try the topspeed yet.

This is how the first reduction looks now, with encapsulation(lid off):