My bosch classic mid-drive ebike started making a rattling noise at the end of last week. This morning I got on the bike to go to work and the pedals locked up. I opened it up and found a broken plastic gear. Some youtube videos suggest it's easy enough to pull the crank out and remove the gear. But how do I get a new one? Is there any hope in finding a replacement gear in or shipped to the US? Maybe someone has a broken motor with a gear that's still intact...

Really enjoyed riding this thing to work every day for the last 2 years and would like to fix it. 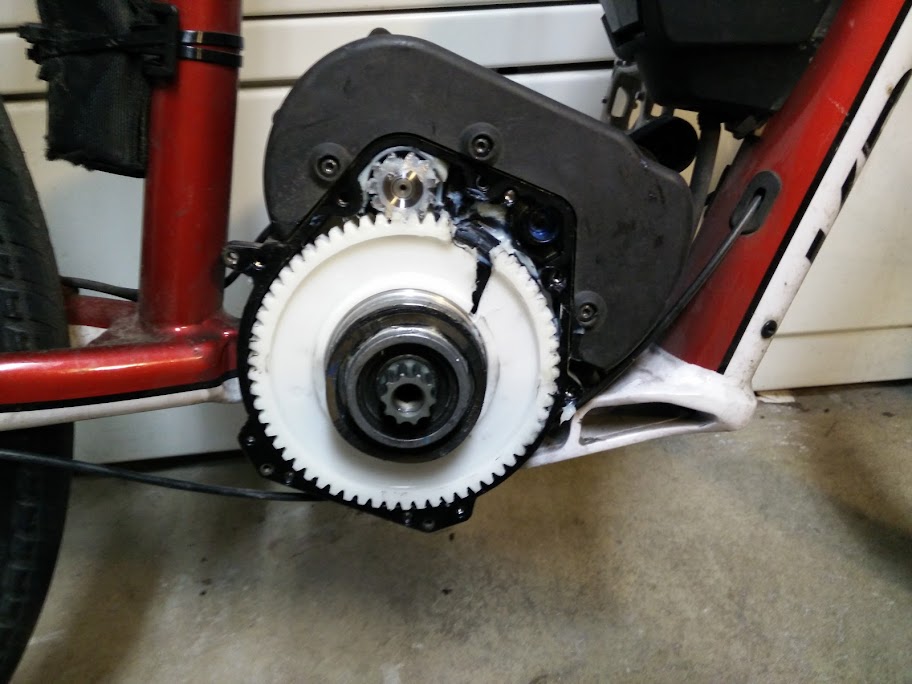 I contacted a few different ebike shops with no success. Looks like this is going to turn into a project. It shouldn't be too hard to 3d print a new one. I doubt a PLA version will be very durable, but once I have a working replacement part I can find someone to CNC one out of aluminum.
Top

Don't waste your time with 3d printing on this. Will most likely not last a few minutes. Get factory replacements only. There is a world of difference in high pressure injection molded plastic and 3d stuff never mind the vast differences in the resins. 3d is Not even close physically.
C-dale Jekyll Bad boy ultra http://endless-sphere.com/forums/viewto ... =6&t=51830
Top

If you don't get any joy send a link to this thread to Bosch at:
http://www.bosch-ebike.de/en/service/ko ... ontakt.php
Miles

orion4096 wrote:I contacted a few different ebike shops with no success. Looks like this is going to turn into a project. It shouldn't be too hard to 3d print a new one. I doubt a PLA version will be very durable, but once I have a working replacement part I can find someone to CNC one out of aluminum.

Good plan, but have the gear machined out of acetal (also called POM or Delrin (brand name)) instead of aluminum. Looks like the original gear might be acetal. You can print acetal too, I think. To model the gear properly try Gearotic: http://www.gearotic.com/index.html
Top

You could try in the german ,,pedelecforum.de,, .There was someone who made some samples.Just go in the bosch section and ask.
Top

It's up to Bosch to supply spare parts for their specification failures......... German engineering doesn't need any more embarrassment

Exactly! Forget about making your own gears until trying the service centre / hotline first.
Top

Thanks for the suggestions. I called the hotline number:
- No known spares or service available for classic motor in US. The classic was never sold in the US.
- The person confirmed that a shop close to me is a certified bosch ebike dealer/repair place, but didn't think they would be able to help. At best, they will just call the number I did and get the same answer.
- He suggested contacting the bike OE (Kreidler). I'll try that, but they will likely tell me to find a US shop to work with.

I should have mentioned in the first post that only the newer bosch motor is available in the US. I'll take a look at that forum before attempting to make my own part.
Top

A guy (as19) in the german Pedelec Forum offers maschined delrin replacement.

The Maschined one is much stronger than the bosch because it is full material and has no thin reductions in it.

Machined delrin may not be as good as the molded part. All kinds of things can go wrong with either process, but molded gears will typically have better surface finishes on tooth profiles leading to longer wear and less probability of crack propagation. It looks to me that the small gear (looks like nylon) wore and caused the cascade of events that broke the big gear. I would hold out for the original gears if at all available. You may also consider a DD hub motor for the miles you ride as they have no gears to wear out.
C-dale Jekyll Bad boy ultra http://endless-sphere.com/forums/viewto ... =6&t=51830
Top

Bosch supply only complete drive units (DU) to bike shops via their service partners, not internals so I do not think you will find an original Bosch reduction gear on its own easily.

Interesting to see an aftermarket gear maker.
Last edited by voicecoils on Oct 10 2015 4:14am, edited 1 time in total.
Top

Count the number of teeth and measure the outside diameter. Then we can work out what module it is. HPC have a large range of stock gears. e.g. http://www.hpcgears.com/pdf_c33/23.40-23.45.pdf
Miles

I PM'ed as19 (in very poorly written German) about his new hub and gear, but haven't heard anything back, yet. There's also a post in that thread from earlier this year which says he probably isn't making them anymore. I used a little force and was able to get the gear off the hub. Then removed it with a 3-arm puller. The hub is fairly intricate and there's no way I can fab my own like as19 did. My plan is to sandwich two pieces of aluminum on the teeth to create a surface for a gear to bolt into. I'll print some prototypes this week. 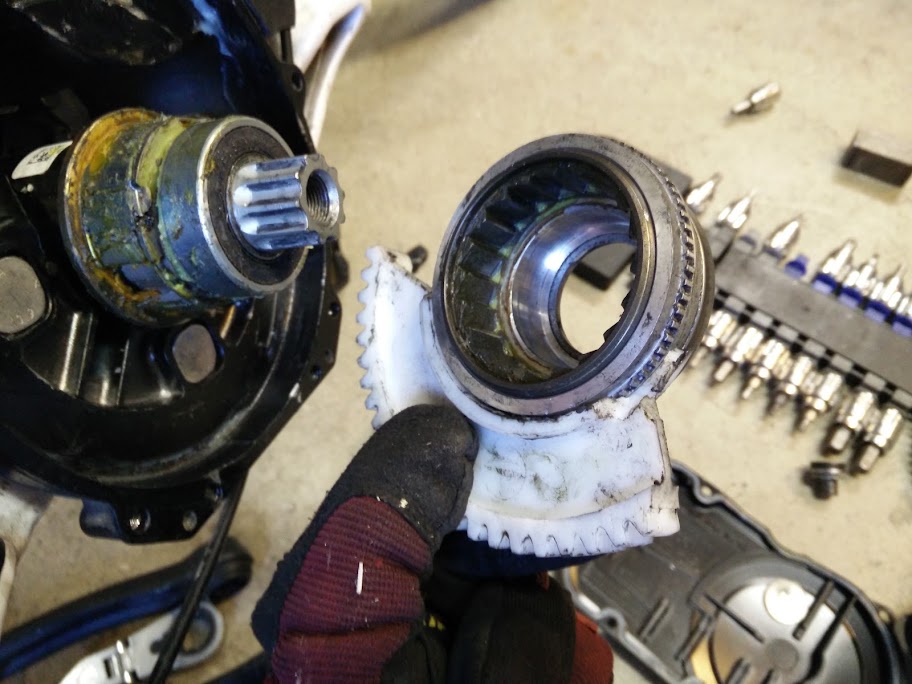 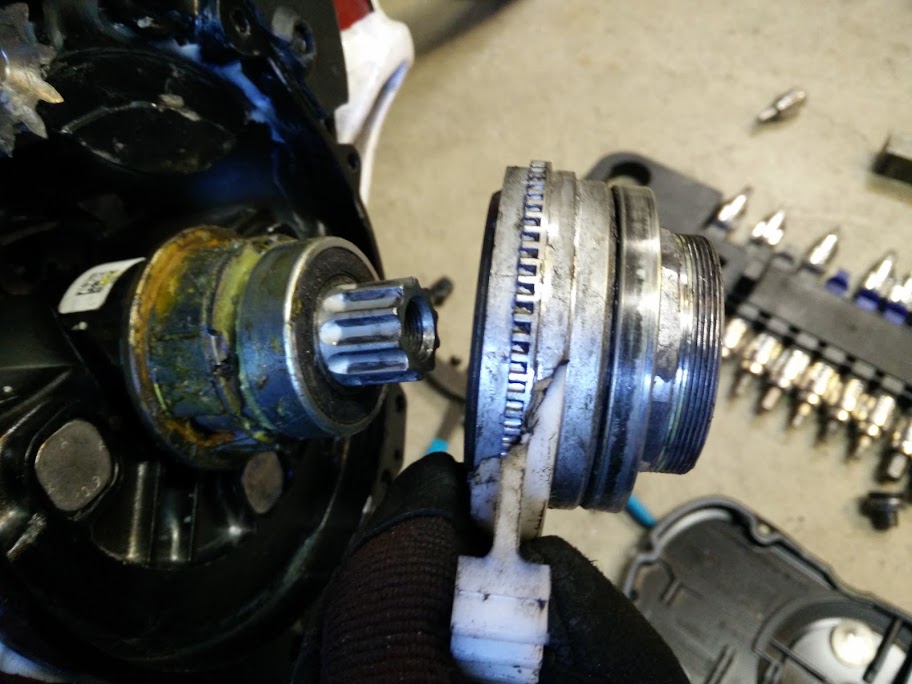 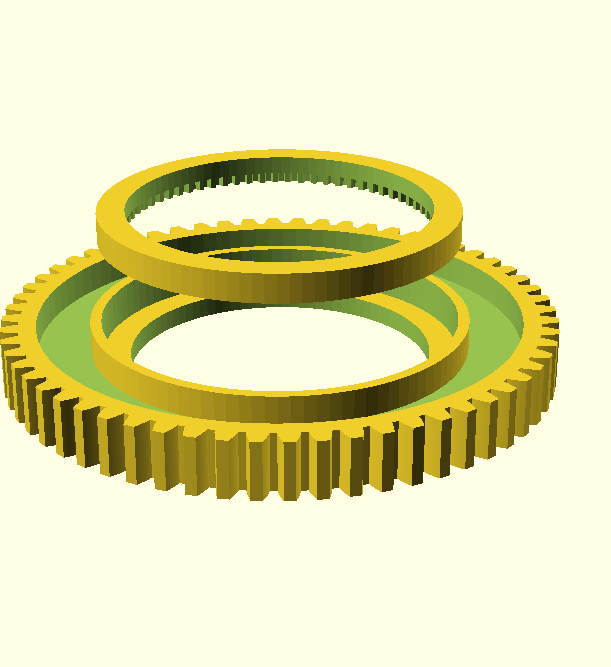 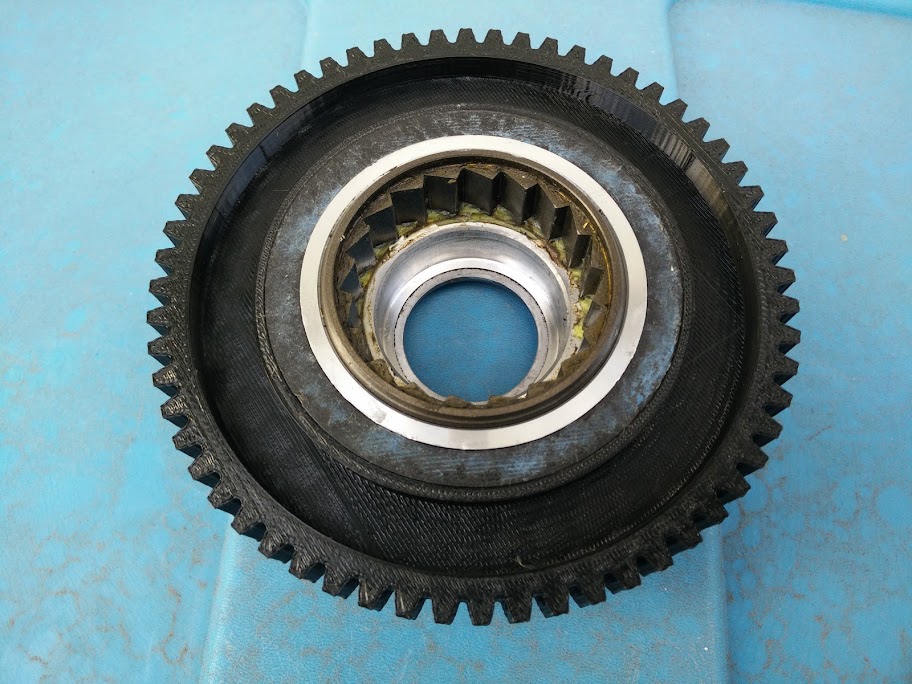 The Maschined Delrin Ones seam to be much stronger than the stock molded ones. I did not Hear of a broken maschined one.

The 3D Park looks good. If you could print that in Nylon?
Top

I would add more material below the teeth roots and radius the inner edges.
Miles

I still need to radius the edges, but here's what I came up with. The inner adapter is being made out of 0.25" aluminum sheet metal with 6 threaded holes for a printed gear to bolt into. There's no convenient way to machine (waterjet?) the part myself so I'm trying emachineshop.com. It's not cheap, but they turned it around in 1.5 weeks (arriving next Friday) and it was easy to submit the order. It was originally a lot more complicated, but would have cost $300+ instead of the $90 that I payed.

I have a test print of the gear made in PLA. For the final version I'll print it out of nylon bridge filament. 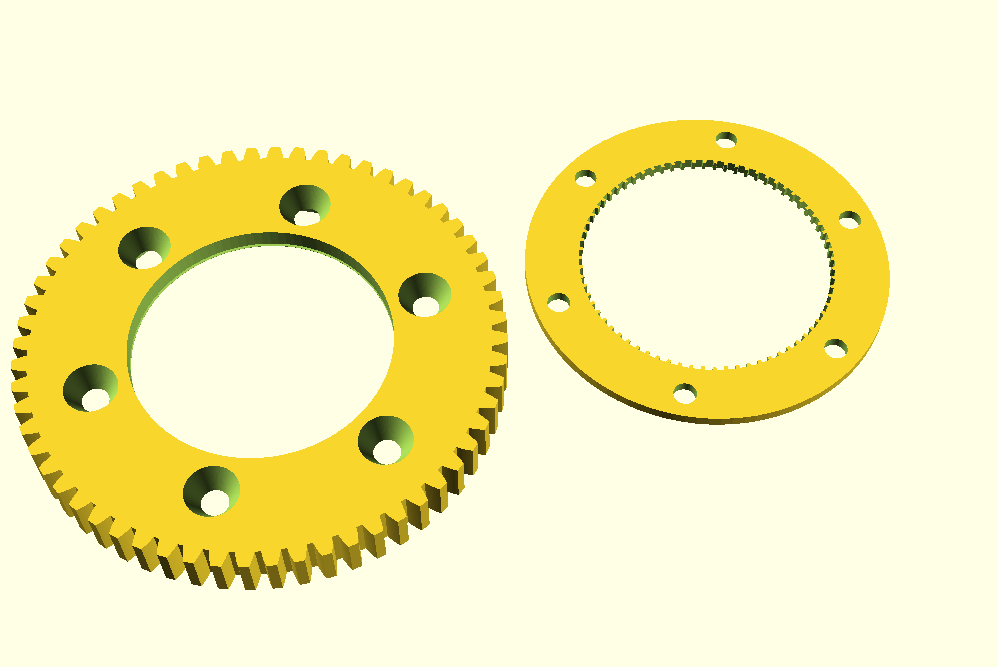 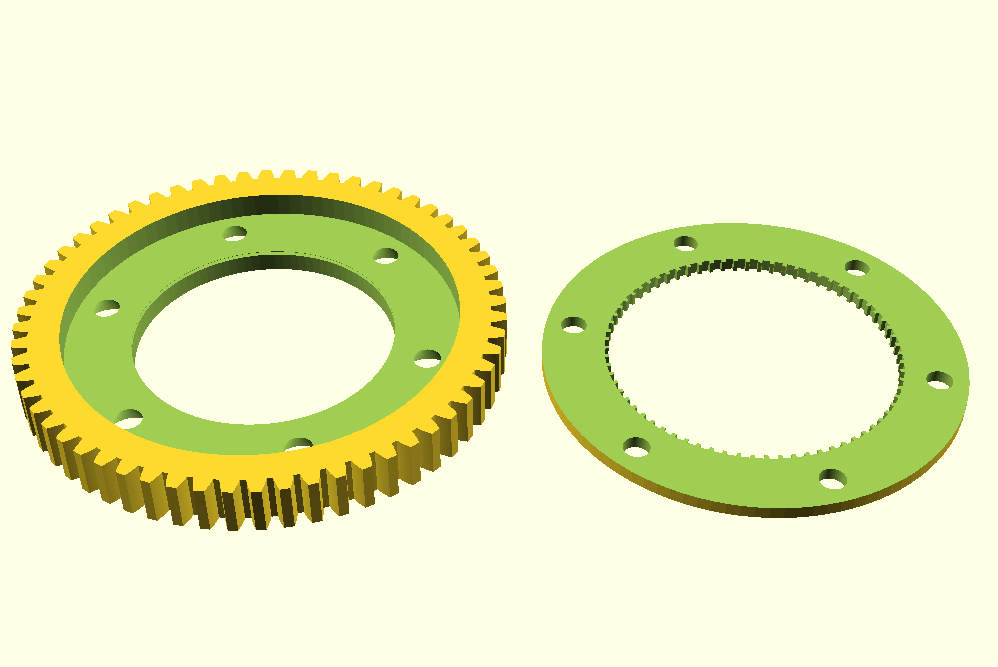 I admire the perseverance, hope it pays off and works!
Top

I received the hub adapter from emachineshop. It's machined well and looks like it was done using a waterjet or laser. Unfortunately, my measurements were a little on the loose side so it's not a press fit. I used some JB weld to bond it to the hub and bolted up a nylon and PLA gear this weekend. Both gears turned smoothly without assist. With assist I encountered some... problems. The nylon gear was too soft and, while it didn't break, the teeth were pushed over which caused it to skip. The PLA gear was basically ripped apart.

I didn't have a lot of confidence in it, though. So now the plan is to get a 0.25" aluminum gear out of either 6061 or 7075 aluminum. The small 11-tooth gear attached to the motor is made out of steel so I'm thinking 6061 to make sure the big gear remains the sacrificial part. 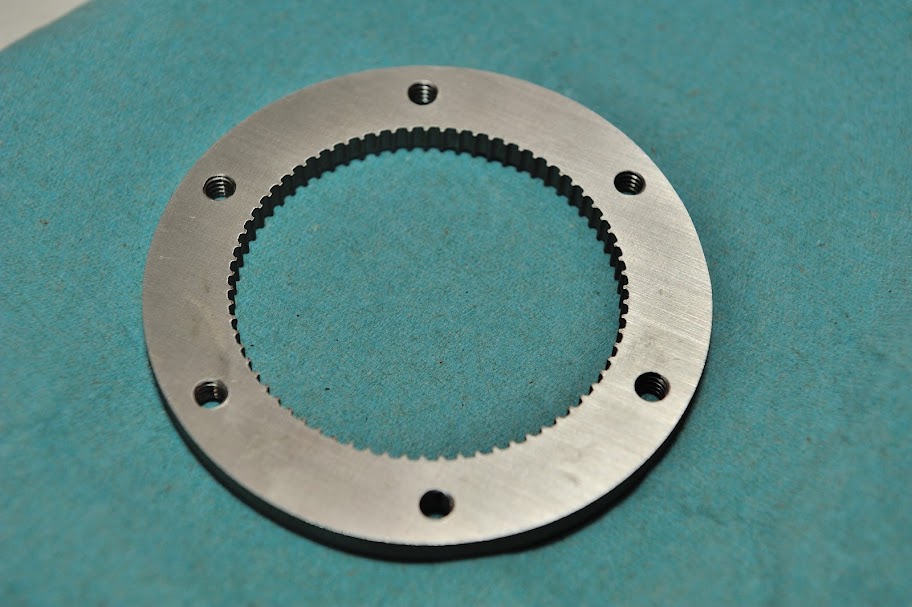 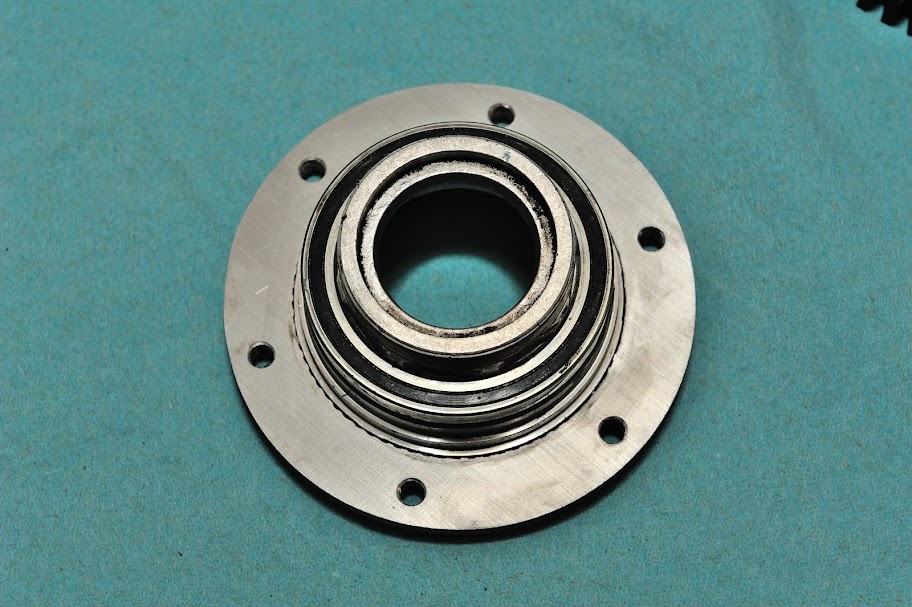 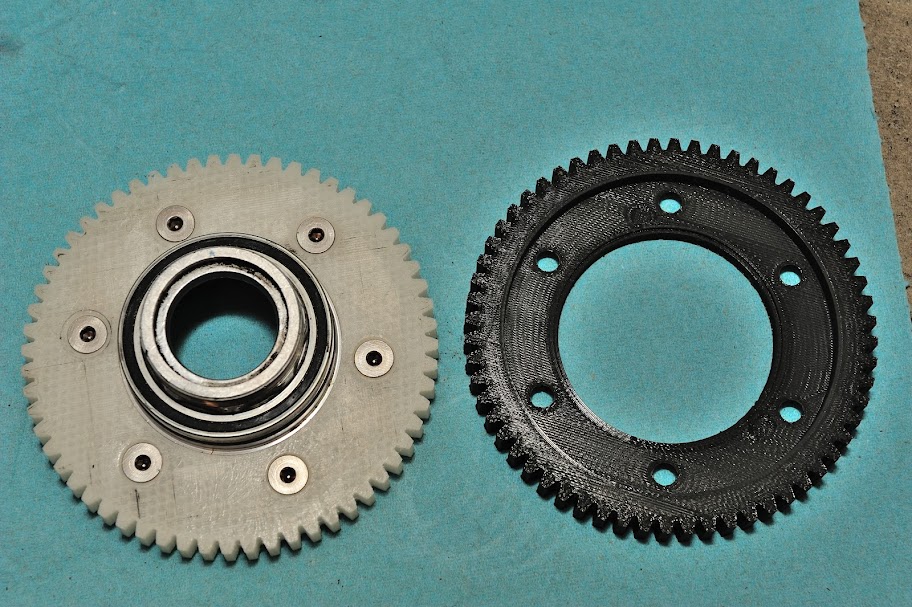 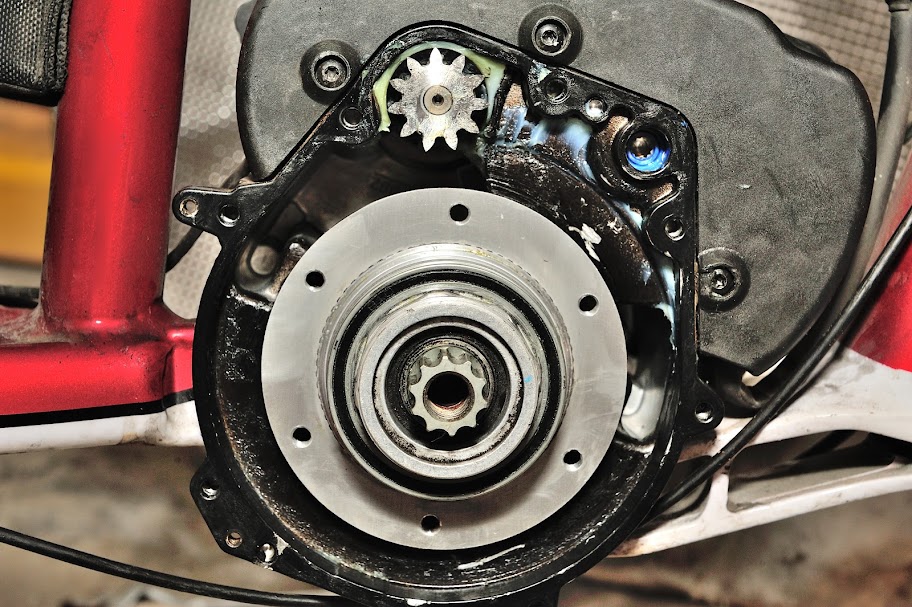 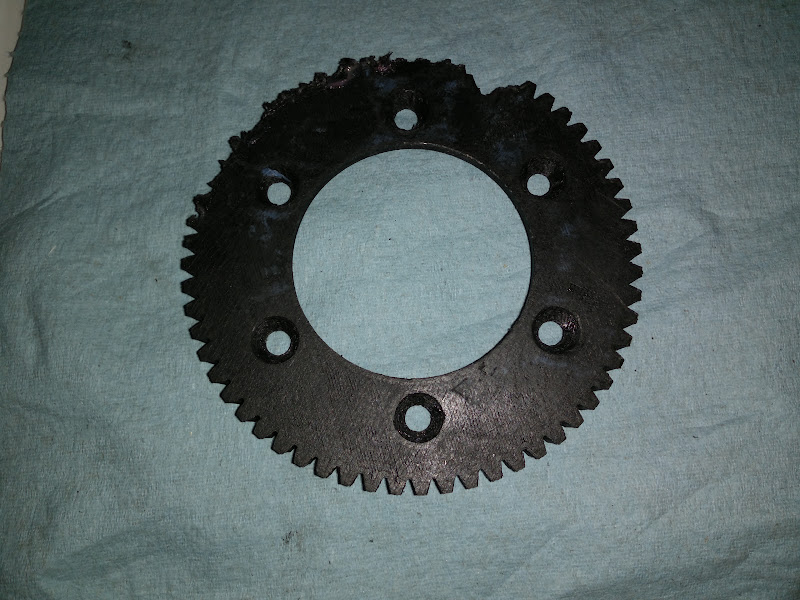 I really hope you figure out how to get it going again.

After all my complaining about the prices of Bosch powered Haibikes I've come around and have been considering getting one. This thread scares me though. If I plunk down that kind of cash I expect to be able to get replacement parts. Heck, I can still get new gears for my old model Bafang geared hub.
New Tidalforce friction drive build: http://endless-sphere.com/forums/viewto ... 28&t=28029

I had a half-width gear (to avoid using the mill which cost almost 3x) made out of 7075 aluminum. It arrived late this week and I drilled some tapered holes and bolted it on. Works great. I'm looking forward to riding it to work next week.

If I was in the market for a new bike I would definitely consider the bosch ones that are available here in the US. My situation is weird because I have an imported bike with the "classic" motor that was never sold over here. In Europe, I'd bring the bike to a dealer and have them replace the motor. I was told bosch is doing that under warranty for all the classic bikes. 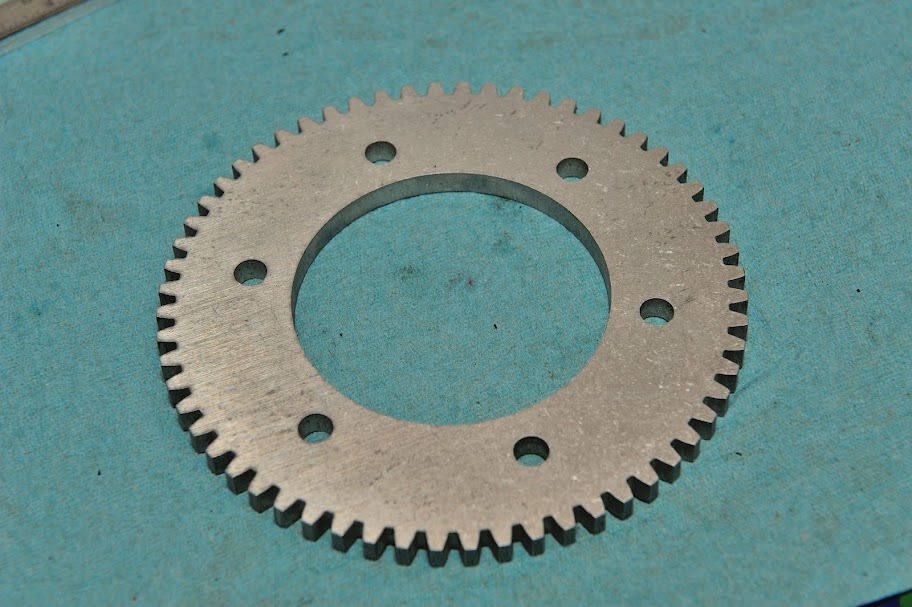 How did the story end? I have 5 haibike bosch classic e-bikes and protected myself from such damage by just buying few used or discarded engines (for under 150 USD/piece) I drove 8000 km with one and never got such glitch.
Top

I haven't been riding my ebike much lately, but I did take it out 5 times a week for several months after the fix with no issues. It still gets used 1-2 times a month. I may be riding it more regularly again if my job relocates.
Top

I just found this thread, my haibike (with bosch drive unit) just had the same issue, it broke the big plastic gear!
I thought of catching up on this thread maybe there is a simple solution nowadays, is there a commercially available replacement part?
Or would orion4096 be so kind to share the designs used so that i can try to have a new part milled?