I know we have tons of threads here about broken spokes/wheels etc.

That means many of you will have some cool carnage pictures to share.

I will start. I did this today on deathbike, riding back carrying lunch in my left hand, putting along about 60mph, decide to see if I can make myself go WOT (wide open throttle), don't know if I got to WOT or not, back of the bike starts bucking and fishtailing wildly. I'm wearing a t-shirt carrying lunch, I did have a full-face helmet on. I just held on (to my lunch and the bike), did the counter steer dance and rode it out on the flopping bent sprocket teeth with the rim/tire just loose and bouncing/bucking in there. Not a scratch, and I ended up coasting far enough on the sprocket to make it clear to the front of my work where my co-workers were impressed but not surprised, and carried my lunch and helmet while I dragged the bike back inside.

I had really expected a high speed rear wheel failure would be harder to ride than that, or rather that a mangled sprocket with a rim/tire bouncing around freely would be more difficult to control at speed, but it was a kitten.

My rim doesn't even seem bent though, and only a single spoke is actually broken, the rest all failed by pulling through the garbage mild-steel washers I put in the rim's over-sized eyelets. 440ft-lbs of torque at the rear wheel lasted for about a year on that sketchy washer wheel build. I'm pleased.

I'm sure some of you guys will have better pics with wadded up rims, so let's see'em! 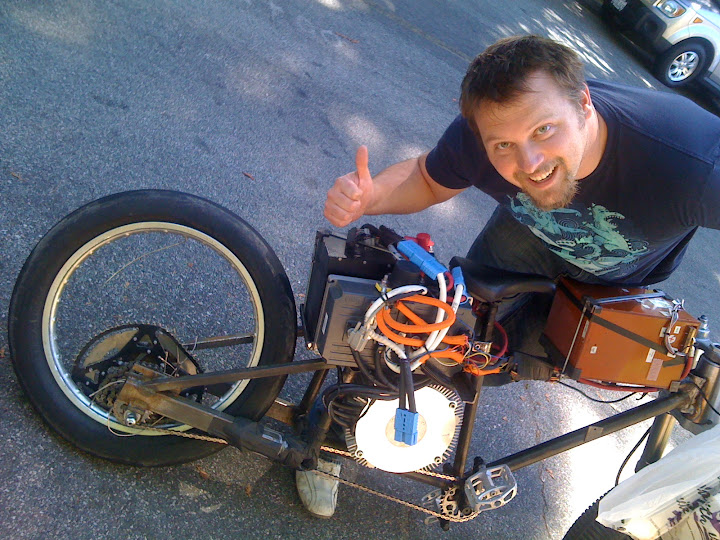 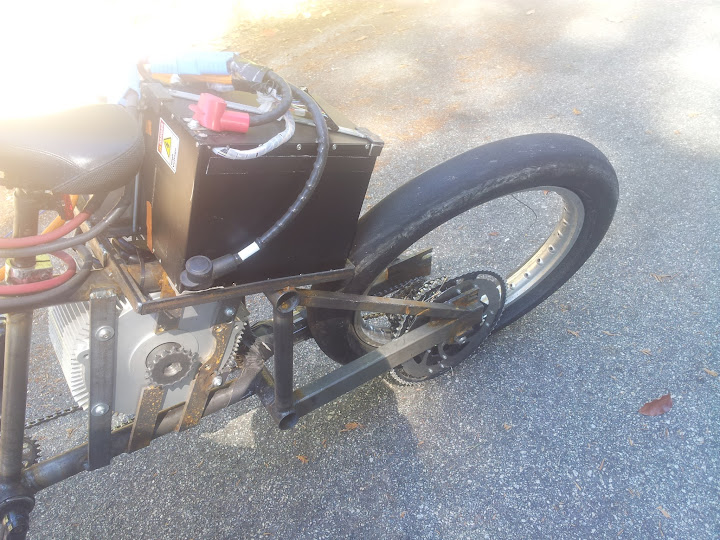 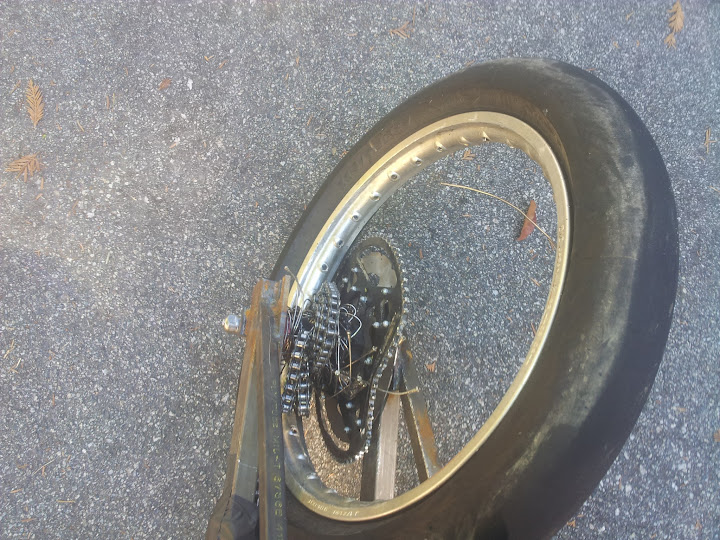 No pictures, but my last one I could barely push the bike; six spokes wrapped around the rear axle. LBS took a picture of it on their cell phone though.

I'm sure glad that turned out well. So a big sprocket makes a better wheel than any of us would have thought. Thx for the lesson Luke. I was actually thinking of going to a spoked wheel with my latest big motor, but no way now.
Top

this is the best one i got documented.
http://www.youtube.com/watch?v=z2YhUHMdY2M

And that tire got properly disposed of last week:

I don't got any? Then again I don't run much over 2000W either. Even if I did, nothing would come close to complete and utter destruction like that. How you did not bite it bad I have no idea. Love the pics though thanks for sharing. Us mortal beings will just have to aspire to do better at wheel destruction from here on out? ;^)
Build it like your life depends on it. Cuz it does.
Golden Motor Schwinn first build http://goldenmotor.com/SMF/index.php?topic=279.0
Giant BMC build http://endless-sphere.com/forums/viewto ... &start=390
Short ride vids http://endless-sphere.com/forums/viewto ... 60#p321703
Top

Awesome luke.
This is not wheel carnage but...

Wow! Maxxis should purchase that as marketing material.

You win luke. Glad your ok.
This was the best I could come up with. A friend of mine stopped rather abruptly.

I gotta say, LFP wins so far, for what was probably instantaneous wheel destruction.

I would love to see a video of that incident.

@thewmatusmoloki: That's about what my wheel looked like on Old Yeller, my old fixie I had in the 80s, after a limo pulled out across two lanes in front of me suddenly from a wall-hidden driveway...except my wheel was folded over like a taco shell. Wish i had pics of it and the limo's crushed door, broken window, and the passengers' shocked faces, just before the limo roared off and fled the scene, never to be found despite all the witnesses.


The only pics of wheel damage I have ATM dont' really show the extent of the damage, which was so bad that I could not even roll the bike out of the street-I had to drag it, as traffic came roaring up from behind not even slowing down--I really think they would have run me over if I hadn't gotten out of the way--but I knwo they could all see me in the middle of the lefthand lane of a three lane road. I got it on the median and spent an hour or more untangling chain and bending the wheel enough to get it rollable to barely ride it home.


The spokes are almost pulled out of the steel rim--if it'd been aluminum, it would've probably just cracked and ripped thru. The rim is bent from being pushed against the frame so hard, and the axle badly bent, when the chain on my middrive wrapped aorund the cranks and pulled so tight it sheared the links and ripped the chain apart, too, just after it destroyed the wheel.
http://electricle.blogspot.com/2010/01/ ... -evil.html
http://endless-sphere.com/forums/viewto ... 45#p400445


I've also had quite a few times of just the weight of CB2 and hitting potholes with heavy loads on it causing 3-4 spokes in a row to break, but it usualy didn't damage the rim to the point of unusability.


Then there is the one on DayGlo Avenger which the spokes worked loose on, from heavy loads, potholes, etc.,
http://endless-sphere.com/forums/viewto ... 87#p451687

How'd I know Luke would have the best one? My worst wasn't even worth taking a pic of it. Just a rim bent a bit.

Love the heart shape one though. Perfect valentine pic for a card if your gal is a pedaler.
Frankenbike longtail
http://endless-sphere.com/forums/viewto ... cing+betty.

HOLY SHIT! You're lucky as hell.

Not nearly as bad but here's a nice little video of a snapped xtracycle frame:

Time for some of those Belleville spring washers.

this is the best one i got documented.
http://www.youtube.com/watch?v=z2YhUHMdY2M

Did I properly observe one disadvantage to a hub motor, not accustomed to hitting 8" pot holes because the motor really wants to go in the pot hole.
Top
Post Reply
18 posts • Page 1 of 1