This is an ugly bike but it is in the right direction for true legal ebikes. I read an article in Cycle Canada at work, when I was telling a co-worker about my current build he said oh like this and opened the magazine to the article. I said kind of but I have more then 1" of suspension travel and showed him pictures of my progress. I tried to find the article I read but unable to find it on the Cycle Canada website. Your Thoughts? https://www.ridesuru.com/products/suru-one
Chinese Ebay build in progress https://endless-sphere.com/forums/viewt ... 12&t=86149 , been through half a dozen scooter ebikes..No More of those.

Its not ugly but looks more scooter then bike. Just because its electric and has pedals does not make it a bike...

Needs better frame design its not ugly its nice or I can say the potential to be nice is there the seat needs to be redesigned and something more segmented.

Looks like it usees the same light as the lights in fatbike lighting thread going on.
Top

If one wants to be constantly pulled over by cops and asked what are you doing in a bike lane or path, where's your license plate, and how about a drivers license and proof of insurance, betcha this vehicle will do all of that for you.
Top

If they have another showing like the test ride he mentions at the end. I will go as it is not far for me to go.
Chinese Ebay build in progress https://endless-sphere.com/forums/viewt ... 12&t=86149 , been through half a dozen scooter ebikes..No More of those.

If you want something that doesnt look like a bicycle then go ahead, you will be stopped quite frequently by authorities. Lots of people are selling bikes that look like that.

Only difference from all those you posted is this bike has been cleared with Canadian laws as a legal ebike for the street and you will likely get pulled over but will be legal. That is a big step past the cheap scooters. It would be slower not a lot of power but it is legal to ride. I have contacted them for a test ride.
Chinese Ebay build in progress https://endless-sphere.com/forums/viewt ... 12&t=86149 , been through half a dozen scooter ebikes..No More of those.

Transport Canada Section 2(1) of the Motor Vehicle Safety Act states That all a manufacturer needs to do is meet the criteria of the laws the bike is legal. This company has met these criteria and are legal. That is how the cheap scooter companies work they open a company but just order the bikes from over seas by the container full. I was at the Emmo company this summer and its just a store front they have shipping containers delivered full of crates and there stacked in the back like cordwood. They put the sticker on stating the law they have met and they have been given the permission. Even though you or I could make a more legal bike because we are not licensed or registered as a manufacturer we are not allowed to drive our bike.

What does Transport Canada consider a power assisted-bicycle?

(a) has steering handlebars and is equipped with pedals,


(b) is designed to travel on not more than three wheels touching with the ground,


(c) is capable of being propelled by muscular power,


(d) has one or more electric motors which have, singly or in combination, the following characteristics:

(i) it has a total continuous power output rating, measured at the shaft of each motor, of 500 W or less,


(iii) if it is engaged by the use of an accelerator controller, power assistance immediately ceases when the brakes are applied, and


(iv) it is incapable of providing further assistance when the bicycle attains a speed of 32 km/h on level ground,

(e) bears a label that is permanently affixed by the manufacturer and appears in a conspicuous location stating, in both official languages, that the vehicle is a power-assisted bicycle as defined in this section, and


(f) has one of the following safety features:

(i) an enabling mechanism to turn the electric motor on and off that is separate from the accelerator controller and fitted in such a manner that it is operable by the driver, or


(ii) a mechanism that prevents the motor from being engaged before the bicycle attains a speed of 3 km/h.
Chinese Ebay build in progress https://endless-sphere.com/forums/viewt ... 12&t=86149 , been through half a dozen scooter ebikes..No More of those.

barf
Any grease is better than no grease.
The best exercises are the ones you enjoy doing.
I strongly prefer vehicles without doors.
Top

Michael Uhlarik is a professional motorcycle designer with just over 20 years experience designing conventional motorcycles and scooters for Yamaha, Aprilia, Piaggio, Derbi, Bombardier and many others, and simply fell in love with the design potential of electric drive in 2007. The Amarok P1 was his first attempt to do electric motorcycle design properly, starting with a clean sheet approach to minimize weight and maximize efficiency. His team just introduced the SURU One Fifty at the Toronto Motorcycle Show. 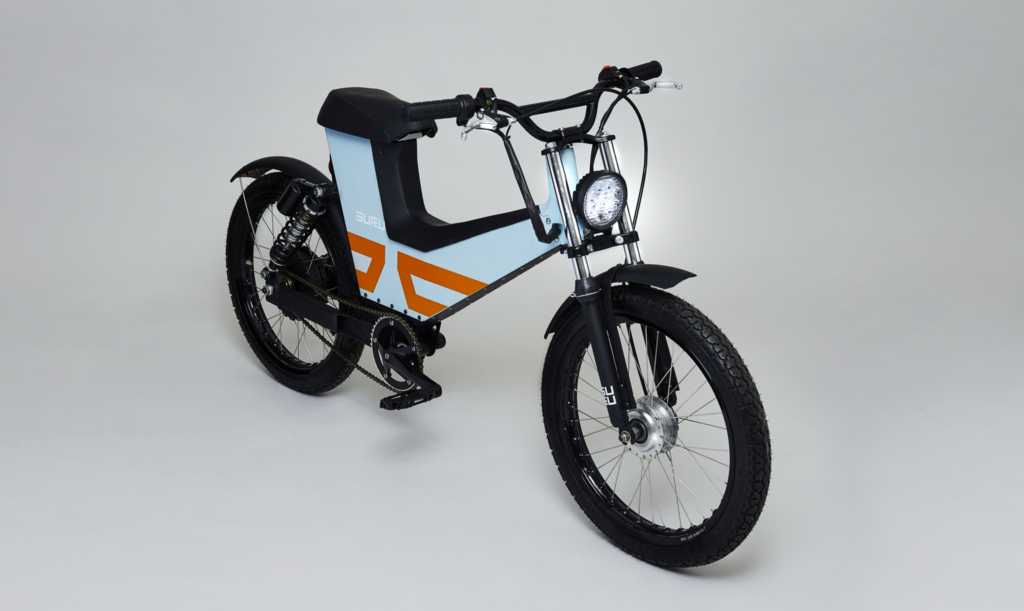 When will we see a SURU land in the US?

The company will be launching a US-spec product in March, with 750-watt power and some unique colors and details. The SURU Two Fifty will retail for $2,900.

The idea of off-road or special performance SURU products is already gaining steam, as our flat track concept at the Toronto Motorcycle Show garnered lots of praise and attention. Final specs are far from clear, but we see a bike in the 6,000 – 8,000 watt range, with serious dirt only performance potential.

Why not go the 50cc scooter route. So many places you could drive a thirty mph electric scooter with regular drivers license. Make it easy to 45-50mph once you get it home like so many gas scooters.
e-bikekit 50v 9.2ah cellman pack
Top

Why motorcycle wheels and 78 pounds for 20 mph?
Top

you would want to run moped wheels and tires for durability and because of the bikes weight.. bicycle tires would likely not hold up well for long..
some ride & sk8 videos:
metacafe.com/channels/NATAS666DAMIEN
http://www.youtube.com/natas666damien
i have nothing for sale..

is it made of sugru by subaru, uh, scooby-doo?
Top

you would want to run moped wheels and tires for durability and because of the bikes weight.. bicycle tires would likely not hold up well for long..

Well, if you used bicycle wheels and tires it'd shave off a significant (if small) amount of that weight.

THen shave off the weight of the suspension parts you don't need at 20MPH (vs the higher power / faster speeds).

Once you take off the weight of stuff you don't need at 20MPH for typical street use, you don't really need anything beyond good-quality bicycle wheels.


FWIW, even at much higher weights, for 20MPH street use, bicycle wheels and tires can hold up fine, if they're good quality and built correctly. I still use regular bicycle stuff for the front of SB Cruiser, which is quite a heavy trike (several times what this bike weighs, and that's without a load of cargo or me on it).

The Raine Trike uses all bicycle wheels and tires, and though it's lighter than SB Cruiser, it's at least twice what this bike weighs. (although TRT hasn't been tested out very long, and isnt' finished yet).

If I were using larger diameter wheels (or suspension) on the back of SB Cruiser, bicycle wheels would work on it, too--the small 20" wheels used due to the deck/rearend design have been problematic with bicycle stuff mostly because none of it was well-built or good quality stuff.

However...tire wear and flat-resistance is easier to get with moped/motorcycle stuff than bicycle stuff, depending on your road conditions.
If you found this advice helpful, supporting contributions are accepted here.

These SURU Scrambler mopeds were made for those who prioritize quality and reliability over cost, and who want the comfort of a motorcycle or scooter in a package that they don’t have to register or insure. And I can dig that.

Typical crap parts all slammed together in hopes of a quick profit from he who knows no better...surprised its “from” Canada and not the 5 letter giant all the parts derived from.

Awful suspension front and rear. You can just tell its all the worst heaviest garbage at the best price.

Moto wheels are a no brainer when it weighs that much for safety reasons.

The frame could look better but its not a deal breaker imo and looks to have good battery space.

But being only 500w and claiming its street legal? Who in thier right mind will drive with traffic with only 500w of power towing 300lb bike and rider?? That is a joke for legal purposes ofc. Any scooter would be more effecient and faster than 20mph

skeetab5780 wrote: ↑
Dec 20 2018 7:52am
Typical crap parts all slammed together in hopes of a quick profit from he who knows no better...surprised its “from” Canada and not the 5 letter giant all the parts derived from...

Well, it is Chinese of course, at that price. Some Canadian Co. just had its name put on it. This practice is not going to slow down anytime soon. Import tariffs are even making it more likely to spread. That, and the fact that since USA had elected Trump, all the world now believe that Americans will buy any BS if it is loud enough.

This video makes this bike seem even worse than it does on paper...from the two oversized rear shocks to the cheesy china removable battery under the seat to the The front headlight bracket that looks like a bent piece of metal stock. The geometry of the bike seems a bit off sort of nose heavy. Then it goes so slow you could just use a kick scooter and keep up with it...