I'm new to the ebike world and looking to purchase a donor bike to combine with a BBSHD kit.  The bike would be used for my 5 mile on-road commute.

My budget is ~$2,100 for the whole thing, which leaves me about $650 for the donor bike.  I'm looking at purchasing one of these three hybrid bikes:
Specialized Crosstrail Disc
Trek Dual Sport 2
Giant Roam 2

Any thoughts between these choices?  I have test ridden the Specialized and Trek at my local bike shops, and gotten the (expected?) advice from the guys there that I shouldn't do a conversion on these bikes because they're not durable enough, will fall apart under the extra weight/power of the motor, etc.

Would be interested in any insight you all have on this, thanks.
Top

That 2100$ also includes the battery ?? I'd consider a a 500Wh battery as a bare minimum for the BBSHD. I actually think the BBSHD is more enjoyable with a 1000Wh battery
Battery is expensive. The very small battery packs that fit under seat I consider way to small... they cannot support the 30A load of the BBSHD for any prolonged amount of time and will irreversibly die of a very premature failure.
Never forget the battery is the single most important part of an eBike, and also the most expensive one. Otherwise, it will end up being a deception. Still the BBSHD is totally awesome !

All three bike looks cool. Just make sure the Bottom bracket is of the compatible kind or you'll have a bad surprise.
Read this to find out what kind of bottom bracket will accept a BBSHD and check that the 3 bikes youre looking at can accept it :
https://www.empoweredcycles.com/blogs/n ... ive-motors
Last edited by Matador on May 24 2017 12:06am, edited 3 times in total.
Top

Can't say 100% without knowing road condition, your weight, anticipated speeds etc... but I personally wouldn't hesitate to convert any of those three bikes to medium-duty electric. I put a bbs02 on a very similar hybrid for my wife, and it is a great bike.
Top

Thank you both for the responses.

@Matador - Yes, the budget was intended to include the battery (budgeting about $600 for that). I will check out that article you linked. I did find a short writeup over on electricbike.com where someone successfully put a BBSHD on the same Specialized I'm looking at, so that is encouraging from a fit perspective.

@footloose - Road conditions are fine, I'm in Phoenix AZ so roads are mostly well paved, flat, and straight (ie boring). I'm a skinny 6'4" 185lbs. As far as speeds, I'd like to get up to 30mph on long straights, but I expect stop lights to keep that down (ie I won't be able to cruise at 30mph for long uninterrupted distances).

Which 48V battery ???
When choosing the battery, you need to consider more than just it's nominal voltage, otherwise what might sound like a great deal might not be.

So 48V battery means nothing for the price without knowing other specs.
Last edited by Matador on May 24 2017 6:21pm, edited 1 time in total.
Top

matador, battery info on luna website. look it up and you decide.
Top

Understand that Trek and Specialized bikes come with a "major brand" surcharge. Apples to apples, they cost more than lesser known but equally good brands like Jamis, Marin, or Raleigh.

At your price point, I'd absolutely avoid gimmicks and frills so as to spend the budget where it counts. That means no suspension of any kind, and no disc brakes. No 650B/27.5" wheels. No 10-speed, and ideally no 9-speed rear gearing. If you find a bike at your price point without these cost-adding, non-value-adding features, then it means the other components will be of higher quality and durability.

Unfortunately, gimmicks sell bikes, and it's far easier to find a crappy $650 bike with gimmicks than it is to find a solid $650 bike without them. The closest thing my shop sells is the Jamis Coda Comp, which has nothing-special mechanical discs, but otherwise pretty good spec and 3x8 gearing. It costs $599. The next lower model, the Coda Sport, comes with linear pull rim brakes and costs $529. We sell the Linus Roadster 3-speed for $599, which would be an unusual but delightful mid-drive e-bike, at least if the chainline worked out.

A really good suspension fork and really good disc brakes might in fact make for a better mid-drive bike (or they might not, depending on your personal tastes and riding conditions). But a $650 bike won't come with really good suspension and discs; it will come with cheesy versions of these parts. Better to stick to the basics and get a more dependable, long-lasting ride.
This is to express my gratitude to Justin of Grin Technologies for his extraordinary measures to save this forum for the benefit of all.
Top

slacker wrote:matador, battery info on luna website. look it up and you decide.

Looking at the GA graph at a 3A discharge curve (average between 2 and 4A) and at a 8A discharge curve (for acceleration/hills), knowing it'll stop at 3.154V.
The GA cells can give you real usable Ah (actually might be a little worst than that because of wires and nickel strips resistance).

Well not bad for a 13.5Ah pack. Gotta say the price of the package seem pretty interesting indeed. Even if I personally wouldn't chose GA cells for this setup.


This bike above will easily do the commute that you want and more, also prebuilt for you. If you need more battery add more like I did here below later on. Just get on a bike you will love it. 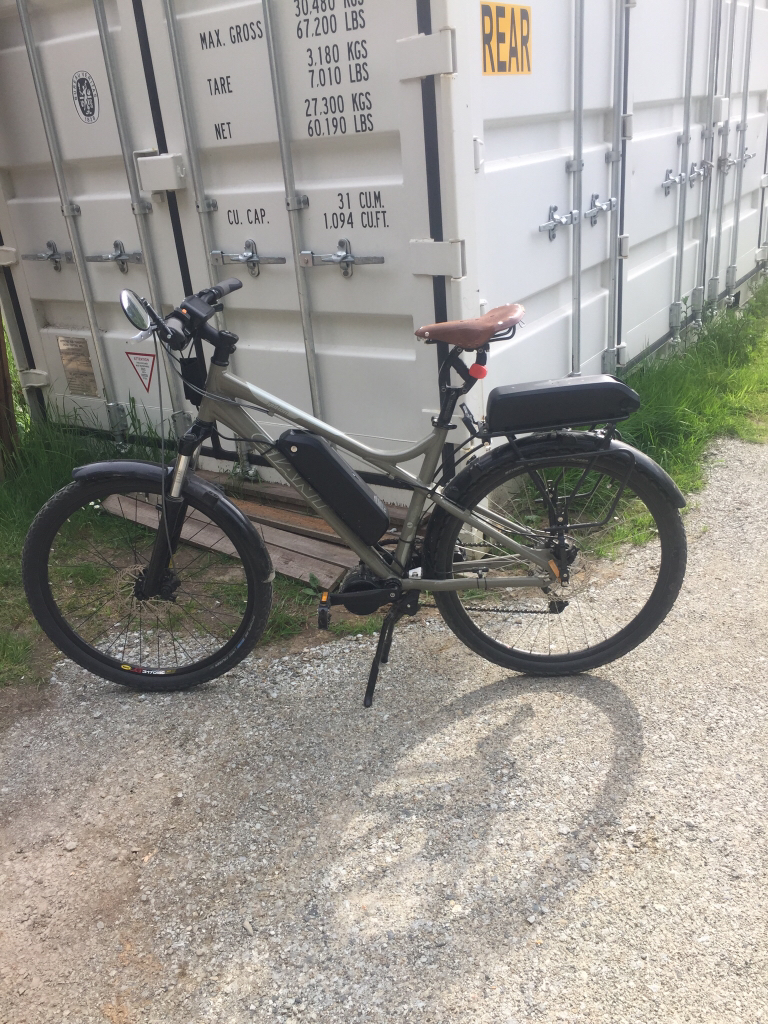 Chalo wrote:pull rim brakes and costs $529. We sell the Linus Roadster 3-speed for $599, which would be an unusual but delightful mid-drive e-bike, at least if the chainline worked out.

Nice bike, the olive looks stolen off the streets of Amsterdam.

EDIT wow on the citizen 3 and several "recreation" choices!
Thanks Justin_le we're here thanks to you. All the best to the mods for their tireless work keeping it on an even keel.
Top

I inherited the bottom line Specialized Cross Trail (v-brake) and I'm thinking about converting that. It looks like a good foundation, like you were thinking.

chas58 wrote:I inherited the bottom line Specialized Cross Trail (v-brake) and I'm thinking about converting that. It looks like a good foundation, like you were thinking.

But in your case, I would definitely get the luna cycles pre-built bike, unless of course you just can't resist the urge to tinker...

Tinker and get a better build, AND the ability and knowledge to trouble shoot and repair. Getting dupport on a prebuilt kit isnt always pleasant.
Thanks Justin_le we're here thanks to you. All the best to the mods for their tireless work keeping it on an even keel.
Top

I have heard that getting support from Luna cycle isn't always pleasant either.

I agree with Chalo on this one. Buy a plain robust bike with no frills, to have the best frame to build on with the money that you have. Yet, if you are good with bike mechanics and do the maintenance yourself, you can have better value for the money buying a used bike.
Make it fool-proof, and I will make a better fool.
Current bikes
Street:
Trek Session 10 mod. Variable geometry. 70mph
Dirt:
Santa Cruz V10. 50mph
Top

Have you shopped Bikes Direct or Bikeisland: their scratch and dent outlet? I have two Deadeye Monsters from BD and a Gravity Sniper from Bikeisland and am happy with them all.

Ditto with Luna, I've had warranty issues that were always quickly handled and always fairly. But I've never had one of their batteries fail and I imagine that shipping a damaged LiPo back to them for a claim could get tricky from a legal sense. No shipper is going to want a battery pack with an unknown fault to enter the system, especially if it might travel in an airplane at any point.
Top

Thanks for the tip on the pre-built bikes from Luna, I hadn't seen that before.  I'm 6'4" and so was hoping for an XL frame size, but the largest Luna has showing is Large unfortunately.   Plus, even if I select the available sizes on Luna's sight, it won't let me "add to cart", it's saying it is out of stock... this is happening for several of their bikes at different sizes, not sure what's going on.
Top

I have 23 inch Diamondback sport for a 6'5" you might be a little short with comoly frame $100.00. The worst Fork and original tires like new. The problem for me I couldn't fit a thud buster post as that would be a giraffe. I'm looking for a frame size that a thud buster and a battery. Then a fork. I having to rethink my donor mtb frame.
Top