Last year I bought a little compact electric bike for my mother and ever since test-riding it I've fallen in love with E-bikes!

While it was just a 36v 250w rear-hub motor I felt like it had enough power for me and my usage (cruising 30-50km in nice weather). What amazed me was that I literally did not have to put ANY power into the pedals and it would handle every hill like a beast. I don't know if it's because it only had 20" wheels, but after reading a bit I suspect it may be??

Fast forward to today, I want a fun cruiser-bike and I came across the "Critical Cycles Harper Single Speed" bike, pic below:

Here is the thing though. While I am not going to be going faster than 25-30km/h on the bike (Which should be fine for 250 Watt), I would like some nice acceleration when launching off, and I'm afraid the 28" wheels will make the motor a bit more dull than 20" wheels?

Since I chose the bike for its design over function, I also don't want to clutter it unnecessarily with the ebike conversion.

My question though: What would be better suitable keeping all the above in mind? A BBS01 (or maybe 02?) mid-drive conversion, or fitting a rear/front hub-motor?

- Will a BBS02 provide too much torque for a single-speed bike? (I guess I could combat that by just having it in a low-assist mode until up in speed?)
- I saw a video on yourtube mentioning mid-drive systems had slower acceleration but faster top-end because of it's ability to take advantage of gears? (I really want quick off-the-line acceleration rather than top-end, like I said 25-30km/h is fine for me)

My concern for hub-motors is that I also need to fit a controller somewhere, whereas with the mid-drive I can put a batterypack in a nice leather satchel hung over the top frame. Of course the hub-motor will also add some bulk to the wheels

- I would also need to fit a new wheel on it that would not look similar to the one on the rear then?
- Do hub motors even come with such narrow wheels as the 30mm that are on the bike?

Alright I'm going to stop now because I think I already filled up this thread with 200 different questions and I could keep going. Hopefully someone will share some insight

For what you want, a kit like this should be ok, http://www.ciclotekstore.com/b2c/produc ... cd5-mini/1,

If you want something more stylish, and a batery inclued in the kit: http://www.ciclotekstore.com/b2c/produc ... v-12-8-ah-

This store is in europe (i saw that you are from germany), they ship fast and i had that motor and is kit on take off...i changed because is speed is 30km/h with full charge off the battery, and 25km/h when she gest almost empty
Top

Are you sure that this is the "fun cruiser" you are looking for? Perhaps a more relaxed upright riding position with a cruiser-type seat and wider tires? Ebikes are wonderful machines, but there is a limit to what 250w and one gear ratio can do. Either it will acellerate and climb hills or it will fly on the flats, but probably not both and certainly not without a lot of help from you.

A Magic Pie will have an integral controller like a BBS01 and only needs a battery mounted somewhere on the bike. I have one in a 26" rim and with a 52v battery @ 30a it will go 31mph/50kph as per my gps without my pedaling, but that's a lot more power than your 250w.
Top

mid drive with a single speed really defeats the point of a mid drive! don't waste your money on that, when a hub with better functionality, lower weight, and less parts to break is going to be a third of the price.

700c wheels will perform a lot less stellar than 20", but there are several small geared motors on the market with dual reductions inside that make that a non issue

look into the bafang G310 and the Xiongda YTW-06.. there are active threads on both on this forum.

And yes, you can order a hub motor with a narrow wheel. One thing to consider is that your bike might have a 100mm rear.. most rear hubs are 135mm wide.. but not all.
"Love and compassion are necessities, not luxuries. Without them, humanity cannot survive." - Dalai Lama

^^^ I ran into an issue a few days ago with an odd rear dropout width. Norco CityGlide cruiser with 3 speed IGH and single front. When I put a regular mtb rear wheel it was quite a bit difference. I must say, I love the feet forward cruising of a Townie 21D, I dont think I could hack a hunched over position of regular mtb or hybrid. I did 35km today, and probably pedaled for 100 meters if that.

Also think about how silent a direct drive motor is paired with a sinewave controller. Yes I have ridden a little 250W geared motor, it was brushed and people could hear me coming up behind them. My cyclone mid drive was the same way.
Top

Going to a larger hub motor(like a BPM or MAC) will negate the reasons for using such a......bicyclish bike. A bigger motor will require a bigger battery pack and by the time you add 30 lb.s, weight doesn't matter anymore and you would have been better off buying a mountain bike and putting street tires on it and then enjoying a comfortable ride.
That bike is better suited to another mini-motor like the Q100, or at the most, a Q128.
If that road bike is what you have to have, go with a Q100C 201 motor rpm speed on 52 Volts. It will do low 20's, still climb decently and still feel like a bicycle.
That"s what I run on my "assist" bike, linked below. It's not a road bike, but a very nice pedaling mountain bike.
Motomech

I just want to thank you all for taking the time and replying to me!

Yes I had the same thought about the comfort of the bike, but I really like the frame + colour of this one (design over comfort I guess) - the price is also very right. In any case I could always put a higher handlebar + different seat on it.

For me a middrive would make sense if:

Acceleration from stand-still is fast (under throttle only - comparing to hubmotor?) and if it can reach 15-17 mph (25ish kmh) with a single-speed cog (16T). It mainly makes sense because I can buy a BBS01 250 Kit locally for a decent price).
Top

I think hub motor will be faster, and you get less strain in the chain.

In a mid drive, for more brisk aceleration you need lower gear (that you dont have

, but it tops out and you have to change for another to keep incresing speed.

Hub motor e like a scooter, acelerating fast( well, is 250 motor, so not hugelly fast) until the top speed

The aceleration will be faster if you get a controller with more Amps, but more than 20A is pushing a bit to mutch...for reliabily i should stick to a 17A controller like the one in option in the kits that i sent you the links
Top

In a mid drive, for more brisk aceleration you need lower gear (that you dont have

, but it tops out and you have to change for another to keep incresing speed.

Hub motor e like a scooter, acelerating fast( well, is 250 motor, so not hugelly fast) until the top speed

The aceleration will be faster if you get a controller with more Amps, but more than 20A is pushing a bit to mutch...for reliabily i should stick to a 17A controller like the one in option in the kits that i sent you the links

Sounds great I will definitely look for a HUB Motor then! Are there really no "small" controllers? In all kits I can only find some huge aluminum included ones and I'd really love to minimize the attachments (which is also why I first liked middrives).

Ideally I would want one of the "small fat" hub motors like this:

Can I get these up to 750 watt or will the size then be too big? Really want something 'low-key'

I've seen a lot of these kits with 1000 watt but I'm honestly not a big fan of the way they look. They are not as incognito as the others: 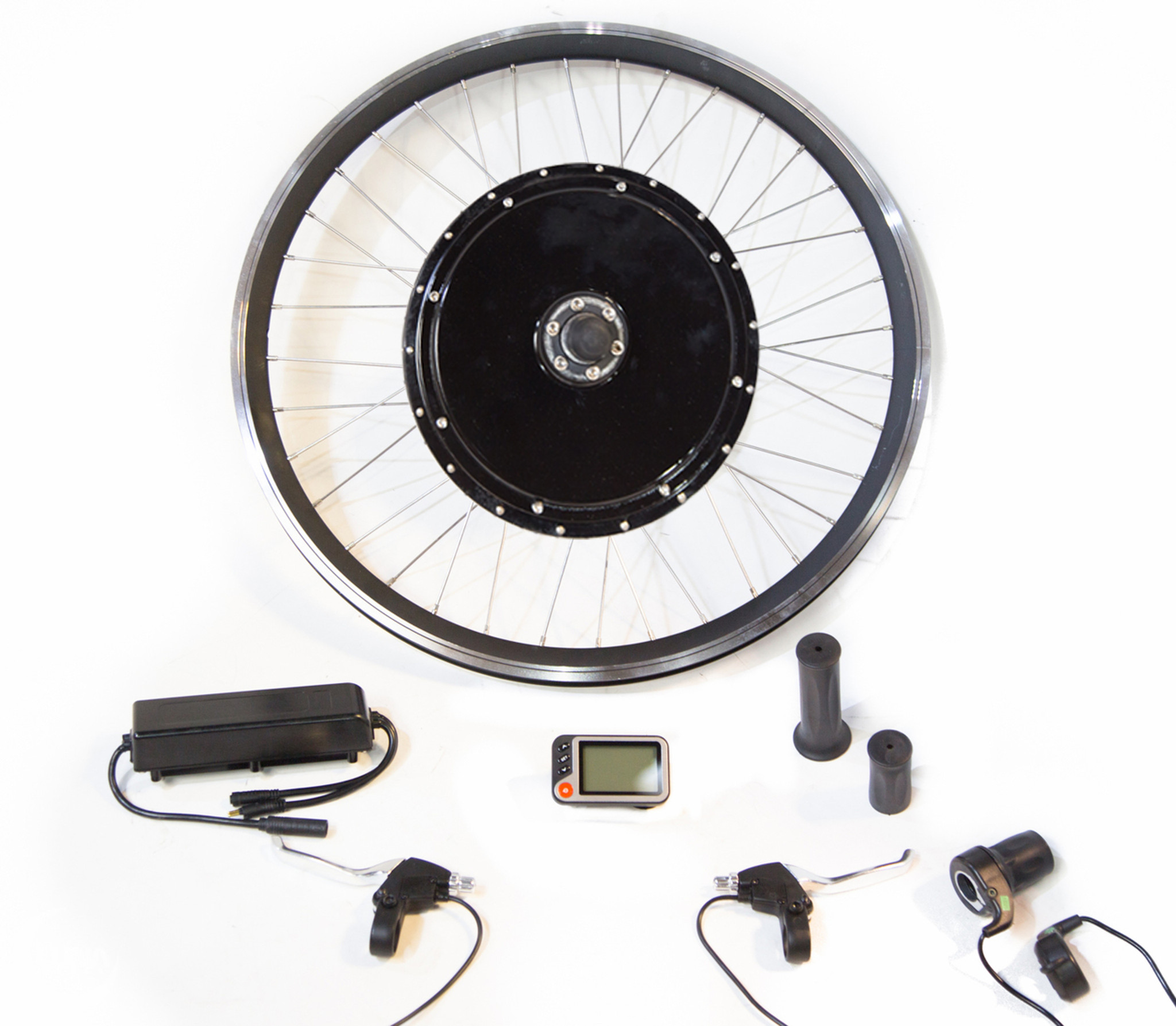 Grins Phaserunner is small and compact and versatile. But it is relatively expensive.


Can I get these up to 750 watt or will the size then be too big? Really want something 'low-key'

I just finished building a single speed ebike. I have a build thread documenting it. One thing you’ll need to keep in mind is that the single speed frame has a rear axle length (the distance between the dropouts) of 120mm - not the 135mm like bikes with multiple rear cogs have. So when picking a motor you’ll want to make sure it’s either designed or custom made to fit in 120mm. Or use a motor that has removable spacers on the drive side of the shaft.