So, here are my experiences, fresh from my first short ride. I will try to keep this as objective as I can...

This thing is INSANE!!! I have a fairly steep driveway, about 80 meters long, and by the time I'm halfway up it is doing over 50 kph and I have been fighting wheelies all the way. I quite literally cannot lean far enough forward to give it full throttle from a stand-still without looping it out

I have done a tiny section of single track with a steep but short climb and apart from having way more power than I need the bike feels nimble, easy to control and really well sorted. It is also pretty much silent apart from chain and tire noise. Throttle control is excellent although with so much power on tap you will do wisely to keep a finger covering the rear brake if things get out of hand.

A proper review and youtube video will come shortly, but first impressions are very very good. It really feels like someone took the power of a motocross bike and stuffed it in something the size of a mountain bike, which was exactly what I wanted

Man...that must be fun

Should be interesting that against a sur-ron

You'll have a wonderful winter riding around. Just dress warm enough and pedal once in a while to stay comfortable.

Hah, we will see about winter riding, apparently we are getting 20 cm of snow on Friday.... but, tomorrow it's forecast -3 and sunny, so I'm planning on heading home early from work to get one last ride in before winter arrives!

The bike really is nuts though, exceeded all my expectations regarding power by a wide margin, should be amazing on the trails! I started the ride without a helmet and after 30 meters went back inside to get my motocross helmet and gloves, the level of power just felt like it was required...

Is there a possibility to program the controller yourself or is there an eco-mode where the power is a lot less aggressive? That would help with snow riding a lot.
Top

There is an eco mode and a physical switch to swap between that and normal mode. I don't think it is currently programmed in though as I couldn't tell the difference, so I'm looking through the manuals now to see how to configure it. I believe there is an app that hooks up via bluetooth

Edit: There is an app, have installed it and connected to the bike. You can change a LOT of settings, including limiting the speed in Eco mode. Haven't quite figured out where to limit the power though, but I'm sure it is in there somewhere. More testing to be done tomorrow, as it is pitch black outside now!
Top

If you can lower the throttle ramp up (how quickly the amps rush in) or the max. amps then the bike will react much more docile. Which will help with riding in slippery conditions.
Top

I can change all those kinds of parameters, however not just for the eco-mode from what I can tell. I like the power it has in full power mode, but it would be nice to be able to mellow it out every now and then, like on slippery surfaces or very technical trails. Will have to do some more research, interestingly this is all done via the controller and not the cycle analyst, that only functions as a display.
Top

Thanks! Spent a fair bit of time looking at it yesterday while setting up all the ergonomics to my liking. It really seems very well built, you can tell that the designers and engineers had the final say in this construction and it wasn't a cost cutting exercise. It also appears to be quite easy to work on should any components fail at some point - but hopefully I won't have to worry about that for a long while

I've got all my riding gear ready and my GoPro is charged, just need to work a respectable (minimal) amount of hours today and then I will head home for what I reckon will be the last ride of 2018 judging by the weather forecast! Have got a route planned with some nice single track and a few steep-ish climbs, should be a good first test

Can you also post some pics of the real bike?
Is that a Kelly controller and qs motor?
Top

First ride done - it gets dark here around 4pm now so the pictures are a little blurry unfortunately!

The bike really is fantastic. I rode for 2 hours on icy and technical single trail that would have been a serious challenge on an enduro bikelike my old KTM 500 EXC I used to ride, but on this thing it really was a piece of cake. Tonnes of grip and power, as mentioned before the only challenge is keeping the front wheel down on hill climbs. I even rode through an icy bog of dirt and semi-frozen water, almost up to the axles, but the bike has so much torque it just powered on through without any complaint!

I have played around with regular and ECO mode, and for forest riding I prefer the more mellow response from the ECO mode. Still enough power to lift the front over obstacles, but not enough to flip you over every time you look at the throttle. The way I have it set up it also limits perfectly to 25.6 kph on flat ground which is great for legal riding in Norway. I will probably leave it in that mode 90% of the time when I'm trail riding

The suspension is really good, I added a full turn of pre-load but otherwise I've left it stock. It is nice and supple and even fairly gnarly climbs with lots of big rocks were no problem, just power on through and try to pick a good line! What I did notice is that unlike a motorbike you can't use your legs to hold on, so when you are standing all the force from the motor goes through your arms. The result is that I found myself sitting much more than I'm used to which was a bit strange.

At the end of the 2 hour ride I had done 16.2 km, with an elevation change of +300 meters, and used 918 Wh of juice. Averaged 52 Wh/km which for that kind of riding with barely any pedalling was pretty damn good I reckon. Max amps drawn were 164, which makes for something like 15Kw of power.... it sure feels like it! 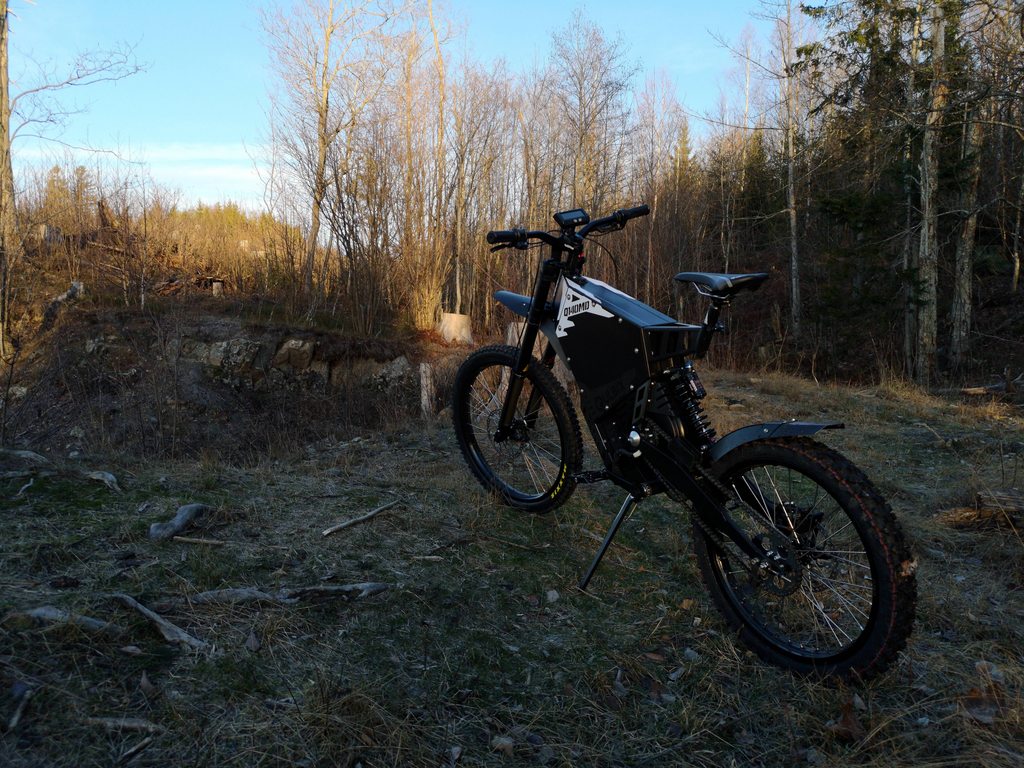 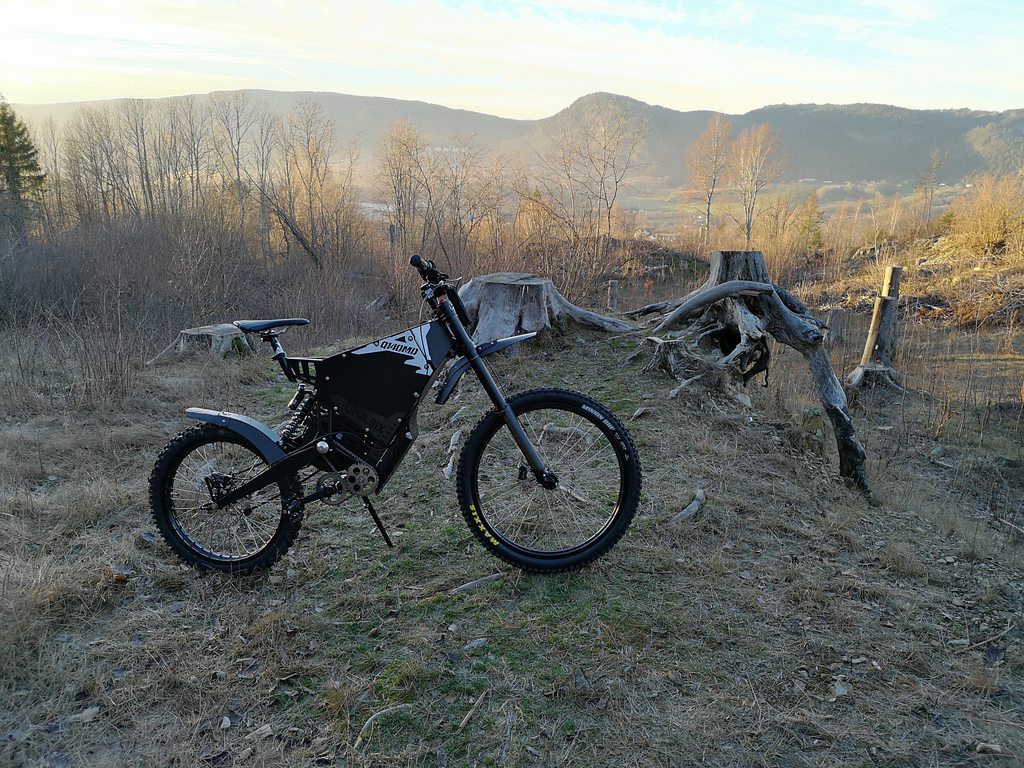 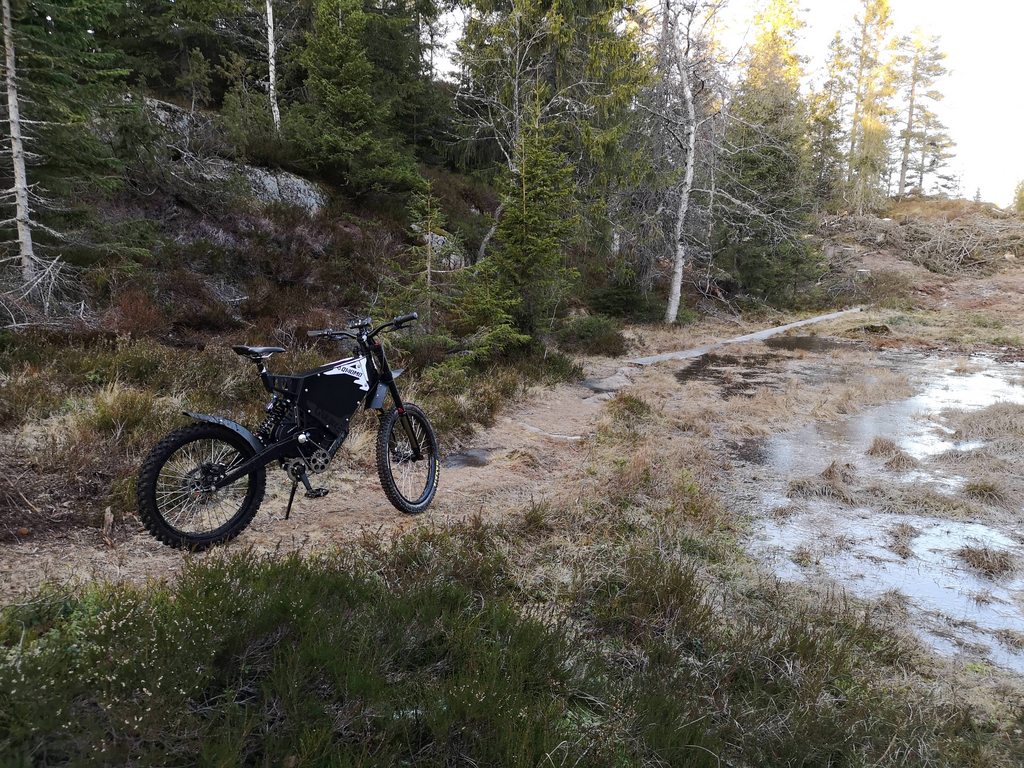 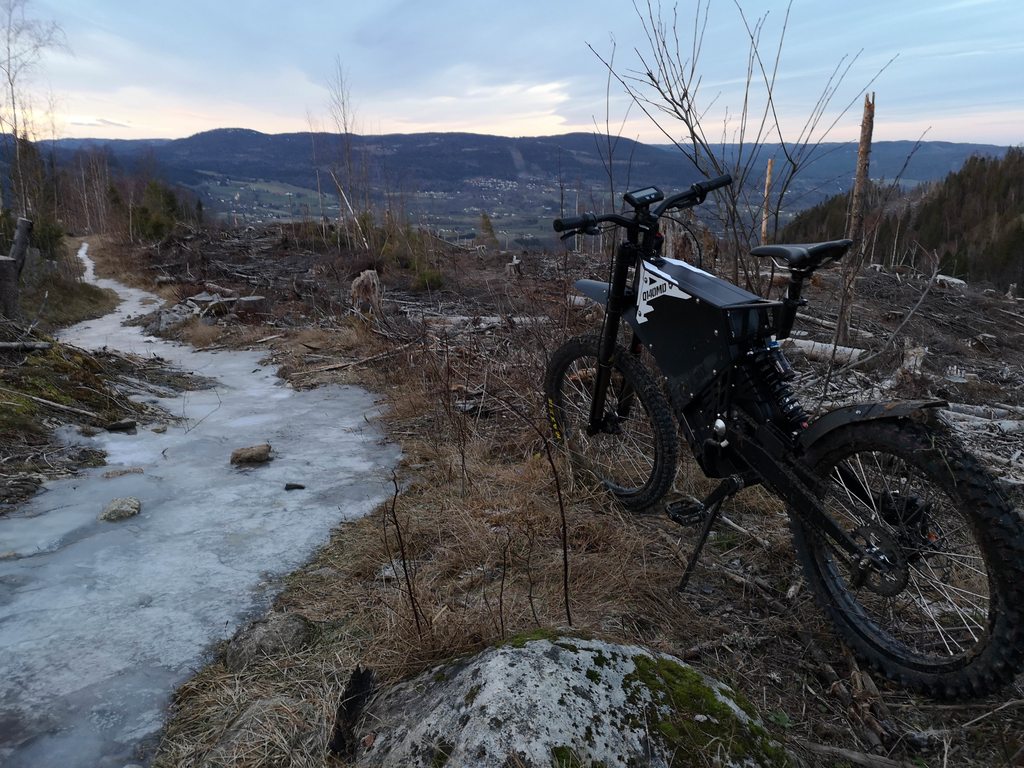 Wow, what a gorgeous terrain!
And I suspect this bike is one of the best "bicycle" ebikes with pedals. Enjoy, as I suspect you'll ride it as often as you can.
Top

Norway is a fantastic place to experience nature

Sadly no riding of motorbikes off road, but this is as close as it gets! I found I could happily leave it in the 25kph legal ECO mode for the whole trip which makes me feel pretty certain it won't get me into any trouble

Could have done with a set of studded tires for this trip though! Think I will leave it until spring instead of destroying this beautiful bike on salty roads

The Youtube vid is up! Unfortunately the bike is so quiet that you can hear me talking to myself and breathing heavily through most of the video

Had another couple of very short rides on the Q140MD now, admittedly got myself covered in mud and slush but very much worth it

Still loving the bike, full power mode is bonkers, and I am pretty sure I will be in Eco mode for most of my forest trail riding unless the terrain starts opening up. A muddy 7 km ride on a gravel road with a bit of elevation change there and back resulted in a power usage of 31.4 Wh/km without any regen applied which is pretty good considering the muddy/snowy conditions.

What impresses me most about this bike is how easy it is to ride. The throttle control is fantastic, super precise and technical riding is a joy. I'm starting to get comfortable with shorter wheelies on it now, and sliding it around in the snow is lots of fun

Looking forward to the snow clearing from the trails now so that I can get back out into the forest, this should be a fantastic riding season

And a few pictures for good measure I suspect the Beemer will feel a "little" heavy after the Qulbix...

Hah, yeah just moving the GS around in my driveway was a chore compared to the Q140MD! This is going to be a fantastic trail riding weapon

Thanks! Can't wait to get out riding again, but as we are due another foot of snow tomorrow it is looking like it will be a while yet...
Top

Any chance to see a close up of the drive?

Tom
I'm married so you know I'm no stranger to pain!
Top

Very interesting bike that.. would love a nose around it.. Going by your controller eco comment unless i've missed something skimming through you thread you have an adaptto? What hubby have you in there?

I can vouch for the raptors build I gave my first one a tough time, I've had two.. Yes I had a seat bracket break but that was way back and replaced no problem.

just a quick edit .. was concerned about all the exposed reduction sprocket chain work ...

You'll hardly use it..

brill
My trusty steed.. The Raptor 140

Thanks for the comments, looking forward to properly testing the bike once the snow goes! Woke up to another 35cm of heavy snow this morning so it'll be a while yet...

The controller is a Kelly KLS 7230S if I remember correctly, and the motor is a QS205. The whole setup is good for 15Kw if the Amperage draw from the Cycle Analyst is anything to go by, and it sure feels every bit that strong

Yeah the sprocked reduction gear setup on the right hand side is a bit... odd

It works, but it doesn't look too great! As you say though, it is entirely optional as the bike is waaaaay more powerful than any pedalling you could assist with. That said it does feel quite natural to pedal along when you are just riding down a gravel road

what is the total weight of this bike?
Top
Post Reply
194 posts