For anyone who is fairly new to ES, I am convinced that the Lebowski axial-flux motor is the ideal DIY electric motor for a non-hub electric bike. The most exotic thing is that it uses round disc neodymium magnets, which are reasonably available and not horribly expensive (for now, at least). Nothing wrong with a radial-flux, inrunner or outrunner, but...if I was tasked with building a motor from scratch, the Lebowski is hard to beat.

Last year I stumbled across reluctance motors, which do not need permanent magnets to work. They were patented in the late 1800's because the ceramic ferrite magnets of the day were relatively weak. However they suffered from torque-ripple. Tesla produced smooth 3-phase induction motors before reluctance motors were improved, so reluctance style fell by the wayside.

In the 1980's, the benefits of a synchronous reluctance style of motor incentivised the development of radial reluctance motors, along with improvements to controllers to eliminate torque ripple.

One of the recent expensive vacuum cleaners wanted a much smaller fan for their portable unit, and their reluctance motor spins at over 100K RPM's to make up for the compact size.

A reluctance motor simply uses an electromagnet to pull a nearby section of steel into alignment with its magnetic field. There are youtubes of repurposing a microwave transformer into an electromagnet, which use this phenomenon.

The common style laminated cores are called E/I because sections in that shape are welded together to form a "figure 8" shape. The design allows affordable machine-wound coils to be slipped into the center before the I is welded to the E.

By cutting off the "I" section, and then encasing the E section in epoxy (along with its coil), any steel that is near the cut-side will be strongly drawn to it.

Tesla began using reluctance motors as the front motor of their AWD models. The benefit is less cost due to less copper and no neodymium magnets, and also that when unpowered, there is zero cogging. I was quite surprised to read that their reluctance motors have the same power per volume as their main RWD motors. I'm sure theres a reason they are not using reluctance for all their motors, but they haven't mentioned why yet.

Microwave transformers are available for free at 800W on trash day if we keep our eyes open. I am interested in a reasonably good configuration of axial-flux reluctance. I dont care if the proof of concept motor is too large for an ebike. Once its proven to work well and V2 improvements are implemented, the motor can be scaled up or down as needed.

If there is a trade embargo with China, or EVs have a huge boom in sales, then...neodymium magnets may become unavailable, or at the very least, they will be horribly expensive.

Reluctance motors do not reverse flux to push/pull, the electromagnets only attract steel, so there is only a pulling motion. Here is GIF of a radial switched reluctance, four phase. As the central rotor spins counter-clockwise, the activated coil pairs go in a clockwise manner.

Sounds like an interesting project, will stay tuned! I remember Mitsuba was trying these on their EV Kart racers a few years ago, but not axial flux. The controller is kind of different with more phase connections, because the SR motor can be driven in a unipolar fashion. Surprised and interested to know that the power density can get that high, I know that they are favored for very high speed machines.

I am a big fan of switched reluctance as a concept.

The power should be the same since ultimately the power of a given motor is defined by the area of the flux gap and the flux density, which is in turn limited by the iron saturation, the same iron whether SR or pmsm/BLDC.

The problem is availability. There are any number of BLDC motors but barely any SRs.

Take care to consider the Eddie currents if making axial flux SR. The radial flux design is generally preferred because 1) it's easy to make small flux gaps that are well controlled and 2) when you consider the mag field direction, the lamination stack avoids Eddie current. It's not so obvious how to do this repeatably and reliably in SR axial.

I'd love to make an SR high powered controller. If I could get hold of a high power density SR motor that could be strapped to a bike I'd be all over it already.
The Earth is flat. Flat flat flat. How would transistors work otherwise?
Top

I see you wrote an article about this a few years back... https://www.electricbike.com/switched-r ... rtant-now/

Switched reluctance, four electromagnetic coils and four shared poles with no coils in them. Ten salinent poles on the rotor. This is a working model, and apparently well-regarded. Considered to be two-phase with two electromagnet pairs. 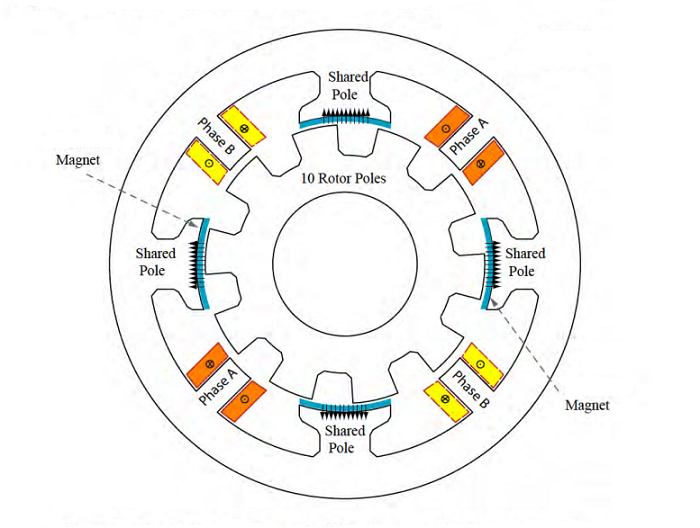 Below, red is energized, blue is not energized, and green are ferrite magnets to help direct the flux path, and smooth out the ripple. 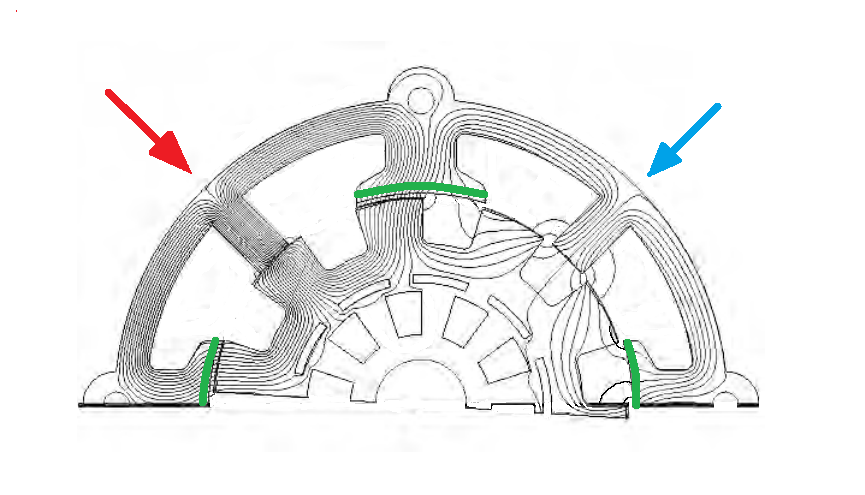 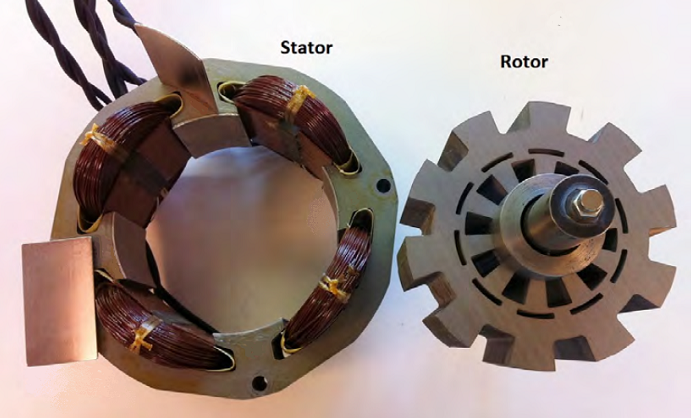 Of course the axial configuration would put the poles and electromagnets sideways.
Top

Using cheaper magnets might be a big thing some day.
Take it easy... but take it. (Woody Guthrie)

I don't recall where I first found that pic, or the company name...

Found a paper (2016, I hadn't seen this before) with some info. Has a graphic of axial switched reluctance.

Also this. 12 coils, 8 salient poles in rotor(s). Three-phase, so it could use common controllers. 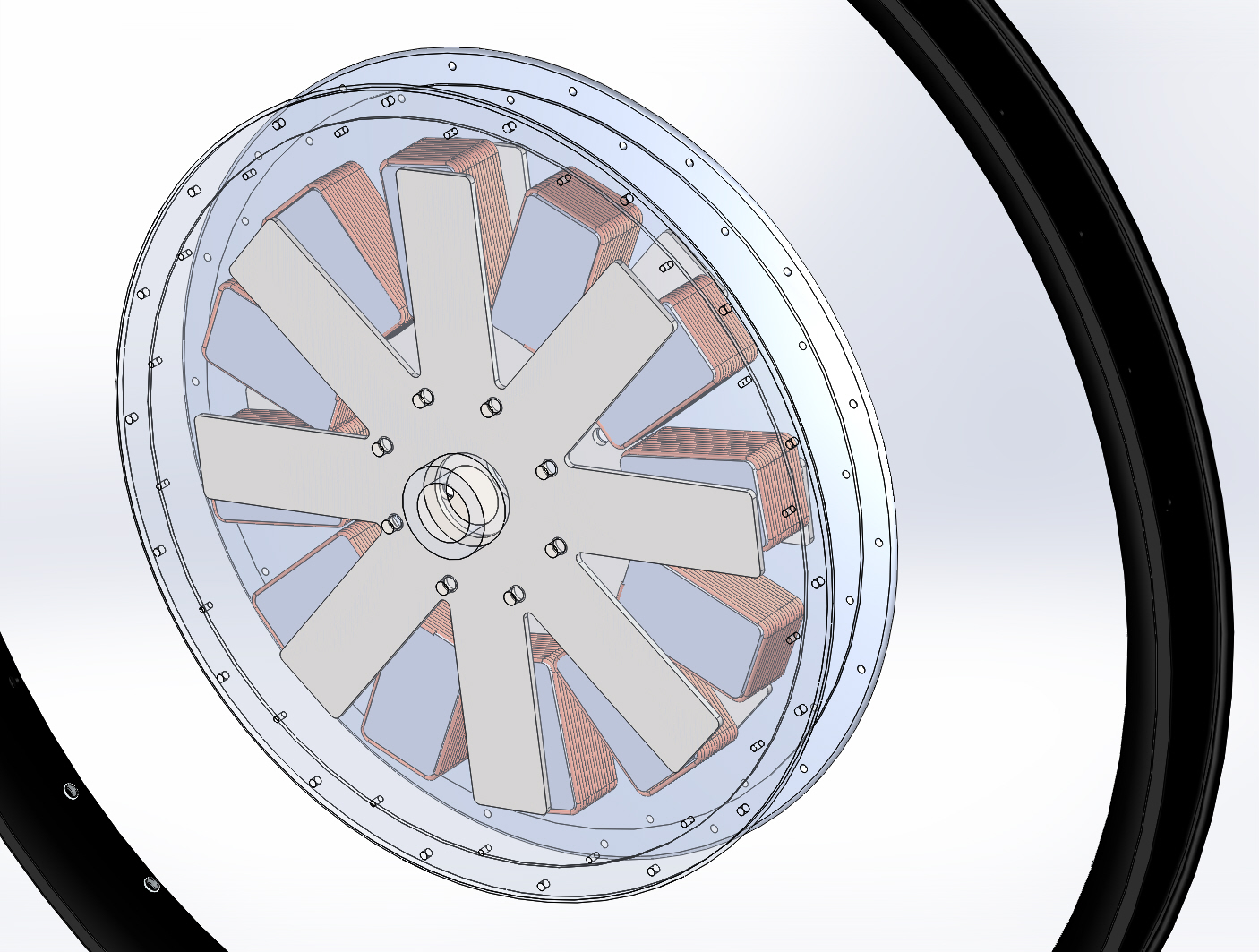