I recently burnt my gears being stupid with a mac and am waiting to order the new double wide mac but havnt seen it on em3ev yet.

But I found this. Looks the same outside but has the old specs? Does anyone know anything about anything regarding em3ev or these? 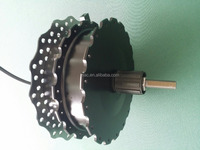 *I can see paul in one of the pics so it suggests its his company
GEARS? Where we're going we dont need gears!

Due to metal plates and a body full of nuts and bolts I am as bionic as my bike. Mxus 4t 120v toshiba fets and 16ah 24s nanotech.
Top

They probably stole his pics and are a scammer company. Lots of those on alibaba that do that.
If you found this advice helpful, supporting contributions are accepted here.

FWIW, I just got an email last week from macmotortech offering me some of these motors, since I had previously inquired about a batch purchase. What I am getting at is that these motors are starting to reach the sellers out there and I imagine they will start offering kits soon. Paul is always the first guy to have a solid MAC offering, so when he has them, I would say they are 'on-sale'.

What you are seeing here is the actual manufacturer of the MAC motors, that Paul is presumably buying from, hence the picture of him. You likely won't get Cutler Mac to send you single motors unless you can convince them that you are a legitimate reseller.

BTW, why are you calling it double wide mac?
Get a Cycle Analyst and a Multimeter, you're still a noob if you don't have at least one of each.

Id be happy to buy 8 as they sell for £500 minimum each over here on dillinger.co.uk.

The stator is 44mm not 22mm and have seen it referenced as the double wide mac etc. Possibly due to the stator or the extended casing?

Due to metal plates and a body full of nuts and bolts I am as bionic as my bike. Mxus 4t 120v toshiba fets and 16ah 24s nanotech.
Top

That motor in the pic above has the standard size stator. This version is not production ready yet, that is a photo of a prototype. If the double wide version is produced, it will be wider than that. The pic above shows a big bearing rear motor, which should offer some increase in cooling performance, compared to the standard motor, but is still some way off of production ready.
We've been supplying the new version standard rear motor for a couple of months now, but haven't really shouted about it. It is visually much nicer than the old version, nicer finish, nicer design. It has some improvements, such as more space for the disc caliper and better centered hub, so less dishing required. Performance wise it's the same. There is a cessette version coming very soon.
The next release from Mac is a new front motor, which has some cool features.
Mac and em3ev offer the same quantity pricing, we are located in the same complex in Shanghai and co-operate very closely.
Paul, EM3ev
Visit http://www.EM3ev.com/ for our Ebike Kits and in-house battery packs. Online Shipping quotes to most popular destinations, with automated PayPal checkout.

Browse the site or drop us a line via the contact page: http://em3ev.com/store/index.php?route= ... on/contact
Top

When is the release date if the wide double mac at 5000w constant?
Help me find my stolen electric brompton: http://bit.ly/1a0vbBC and Bosch Sinus B3 http://bit.ly/1eV0WQz
Top
Post Reply
7 posts • Page 1 of 1