I have been toying around with the idea of converting my exmark walk behind to electric. I think I found a suitable motor but now I am working out the battery configuration in my head and I don't see it being feasible. The motor is a em1004 48v 200amp continuous brushed dc motor. I have loads of old laptop batteries that I have been recovering 18650 cells from. According to my calculations I would need 11 18650's in series and 45 of those in parallel. This is assuming the cells are rated at 2c which I cannot seem to find the specs on any of the brands I have. When I look up the pdf on them the manufacturers don't have a c rating, rather a discharge chart at different c ratings. Have I done my math correct? Do I really need 500 cells to make this work? Most of these batteries are rated at 2200-2500mah. The mower is fitted with a kohler 15hp motor currently.
Top

Yeah, if they’re really 2C 11S45P would be about the right calculation for 200A load. But to be honest, 2C is probably optimistic and that many cells of questionable C rate would worry me… For something like this I’d probably explore RC Lipo?
Talent must not be wasted.... Those who have talent must hug it, embrace it, nurture it and share it lest it be taken away from you as fast as it was loaned to you.

Used laptop cells aren't good for much and this is probably one of the least suitable applications for them.

The cells used in laptops are more like 0.5C. You could run them at 1C but they'll get hot. So really you're looking at 1A discharge per cell, or 200 cells in parallel.

Also you'll need at least 13-14 in series to get 48V, more if running them hard as the voltage will sag so much.
Top

Well that's not what I wanted to hear but I appreciate the honesty. I never really thought about rc batteries but upon looking at them I'm not sure they are cheap enough. I'm assuming the mower is going to pull at least 100amps constantly, tall grass and hills will probably get me closer to 200. Just conservatively 100amps for half an hour means I would need a 50 amp hour pack right? And that's probably on the small side. As fas as I can tell I may be able to get away with 2 6s 4000mah packs in series and need 12 in parallel. That's $1200. I'd like to be at half of that.
Top

What do you think about going with something like a used volt pack? Is there any way for me to really figure the amps the motor is going to pull without buying it and installing it?
http://www.ebay.com/itm/Chevy-Volt-Batt ... Hc&vxp=mtr
Top

You can assume it will pull the max the controller allows during startup and whenever it hits high stuff or thick / wet stuff, to be safe in rating your pack for it. If it doesn't, then you're ok, but if it does, at least you're covered.


Regarding pack size, you should size it some percentage larger than you need, because age will lessen it's ability both to deliver current without voltage sag, and it's capacity.

Otherwise you wind up having to replace the whole pack when it can't do what you need (power wise, at least; time wise you can jsut plug it back in to charge).
If you found this advice helpful, supporting contributions are accepted here.

Thanks for your replies. I am buying 2 chevy volt 48v 47ah packs that I will put in parallel. This should give me plenty of run time. He offered me the BMS for another $20. Is this just going to balance the cells? Is it something I need or not? Other than the batteries and the motor, all I plan to buy are a contactor and panel meter. Is there anything else I need? I have a delta q charger that I think is programmable.
Top

I picked up the two 48v packs today. He gave me a little bit newer ones so in parallel I will have 97Ah. I think that will be plenty. What gauge wire do I need to hook these up? Should I have gone for the BMS for these packs? Does anyone have any knowledge on programming a delta q charger?
Top

Here is a video of a person that used the ME 1004 motor on a riding lawn mower. He has a analyst hooked up that shows the various readings he was getting. I think his amps were closer to 30. It spiked to 100 when he turned on the mower.

I have all the parts for the conversion now except for the power switch and the panel meter both of which are on the way. My question is about the contactor. I can't seem to find any wiring instructions. I assume It works the same as any relay and I need to apply power across the 2 small terminals to activate the coil. My questions is can I use the 48v I am using to run the motor? Also I am wondering if there is a standard order for the fuse, contactor, and shunt (for the panel meter). They will all be installed on the positive cable and wasn't sure if there is an order they should be in.
Top

My conversion is basically done except for the fact that I fried my panel meter. I am confused on the shunt. I assume from my years working on cars that I would measure the amperage on the positive side before the load. That's where I installed the shunt. My panel meter amperage is now not showing and the amps and the voltage is erratic. After some research I see some show the wiring of the shunt on the negative side after the load. Is this correct?
Top

Depends on the meter, for where it's shunt goes. Lots of them do use the negative side, though.

If it's not powered by the system (has it's own power source) and it's measurement stuff is isolated current vs voltage, then it doesn't matter where the shunt is (pos/neg).

If it is powered by the system, then it probably isn't isolated and it has to ahve the shunt on whatever side it is designed for.
If you found this advice helpful, supporting contributions are accepted here.

Here is the meter and shunt I bought. Of course it didn't really come with directions except for labels on the back of the meter. It does use it's own separate power supply since my system is 48v.

If the labels on the back don't tell you, you'd have to ask the vendor or manufacturer where the shunt goes, or if it even matters on that particular one.
If you found this advice helpful, supporting contributions are accepted here.

I've used one similar to that in a project. worked well enough. 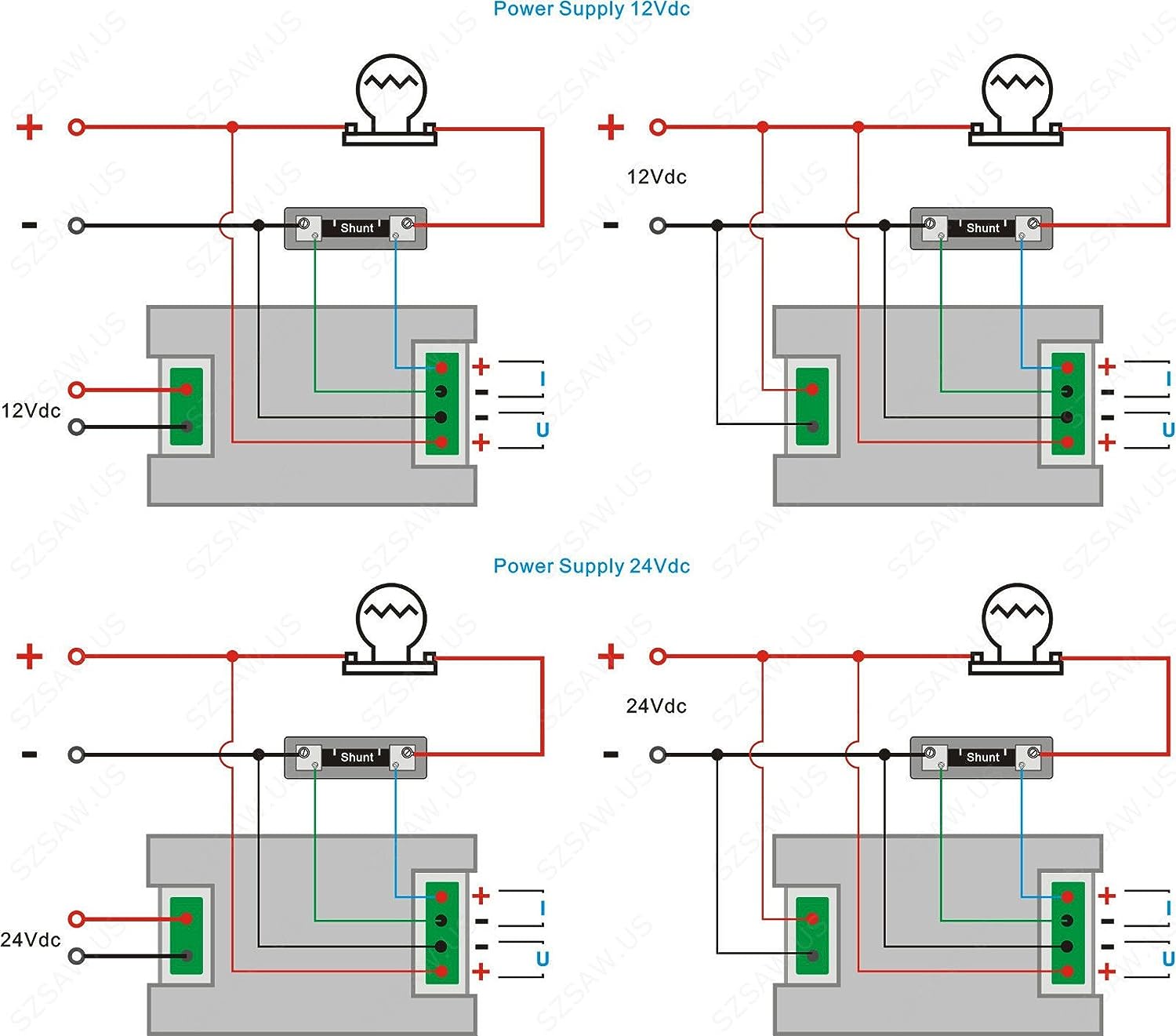 I officially cut the yard for the first time with the mower yesterday. It was a success for the most part. I noticed the motor got really hot. The cables and batteries did not seem to get hot. Is this normal for the motor I am using? At that point I did not have a gauge to measure amperage or voltage. At one point I attempted to turn the motor on with the blades engaged and the self propelled on. This blew the 250amp fuse. I jumped the fuse to finish mowing since I need to order a new one. I know this isn't safe. I got the parts today to install the replacement meter. I moved the shunt to the negative side and got the gauge powered on. The gauge was reading almost 400amps with just the motor on (no blades or self propelled). That didn't seem right. When I engaged the blades it went up to 1000 amps. I shut the blades off and shut the mower off but it wouldn't turn off. Apparently the contactor has welded itself. I have ordered a new contactor that will hopefully be more heavy duty and a new 250amp fuse. I guess my question is, is there anyway the motor I have could be pulling that much amperage? I know it wasn't pulling over 250amps before when I had the fuse installed unless I started all the loads at once.
Top

HELP!!!! I have major problems with my project. I got the new 250amp fuse and the new contactor that can supposedly handle 400amps. I got it wired back up and as soon as I tried to start it the fuse blew and the contactor is now welded shut. I am baffled as to what I could have done to cause this issue. The only thing I did was move the shunt to the negative side just as in the schematic drunkskunk posted. I cannot check voltages drops because this contactor is ruined and stuck on but I did check my resistance on the negative and positive side and they seem to be good. Could this motor be pulling over 250amps without running the blades? I need some help quick because my lawn is going to get out of control quick.
Top

Well it appears the motor must have a short in it. After my 3rd contactor and fuse and removing the shunt from the system it is still blowing the fuse and welding the contactor on startup and there are no loads on the motor. I am going to try to get the motor warrantied but I am thinking of just selling the replacement motor because I am not sure if it can handle the job. I really wish this forum was a little better about helping with this project. I am new to all of this and some replies would have been nice.
Top

I would use 16ah Multistar for this application at least 32ah of 12s lipo. I have everything to do it right now except the me1004 motor?

hello, I've been in the process of doing the exact same conversion (Exmark 32" walk-behind). Here is a pic:

I just received my 48v 100ah battery back w/ BMS, and getting ready to wire up the circuit.

I'm using the same ME1004 motor... Curious how your project turned out? Did you ever figure out if the issue was with the motor or the other components?
Top
Post Reply
20 posts • Page 1 of 1