VG's on the UNDERSIDE of the hor stab, about 1.5" in front of the stab/elevator gap can increase the available elevator authority. In fact most certified vg's kits come with them for the stab, besides the wing tops. The wing ones let you attain a bit higher AOA before stalling and the enhanced elevator authority let you take advantage of that. Gap seals between the hor stab and elv, can also increase it's power, sailplane parts suppliers are a good source. Is your hor stab AOA adjustable? If so, set right?

I dealt with poor elevator authority in the flair with my first RANS S-7, which I installed a converted Subaru engine in, much heavier then it was designed for. Reliable as hell, 1300 hours and no problems, but unless it was loaded for XC or with a passenger, I was always on the verge of too far forward CG, even after adding lead in the tail. The above mentioned mods helped that condition.

Your static stick rigging should be based on how many degrees of movement you have in the control surfaces, set while on the ground.....not as a way to solve poor pitching power in the flair, ideally anyway! See if you can get a shot of your elevator in level flight/cruise, it should be in line with your hor stab for best performance.
Top

Agree with a fwd CofG.

You can likely do gap seals with either the covering you have or 3m clear car bra.

Adjusting wash out with the struts should be done in conjunction with stall testing otherwise you can get into an asymmetrical stall condition.

Some onboard video of the Electric Belite!

Not quite enough authority on the elevator to flare for a proper three-point landing.

Move the CG rearwards by moving the rear pack to the rear of its tray.

Verifying that the elevator pushrod is not bending under flight loads, and that the travel is to spec.

Wow, how amazing to build your own electric plane and fly it. What an achievement!

Any estimate of the power consumption for level flight?
"One test is worth a thousand opinions"
Top

What an inspirational project that is. I am very impressed!
Top

After re-weighing the airplane with a set of automotive corner scales, I got an identical result to the scales that the EAA had. So I moved the rear battery 8" rearwards, and replaced the elevator pushrod with a slightly less bent

and slightly thicker walled tube that was slightly longer. Now the elevator is limited to 35° up and down symmetrically.

It flew amazingly well, and had all the flare authority that I needed for three point landings. The EMI problem has also been solved with a really awesome performing antennae located as far away as possible from the noise generating electronics (dumb AM Aviation radios). It is a dipole with the elements made from copper foil tape. It uses a Pawsey stub and Rg58 coax up to my handheld. Better reception and broadcast that the KX155 in the 172.

Cool antenna. I assume you will route the coax inside the body somehow.
"One test is worth a thousand opinions"
Top

I love the folding wings!
Top

Yup! the coax went thru the composite tail into the cabin via the left rudder cable sheath, A friend of mine who is much skinnier than I helped me out: 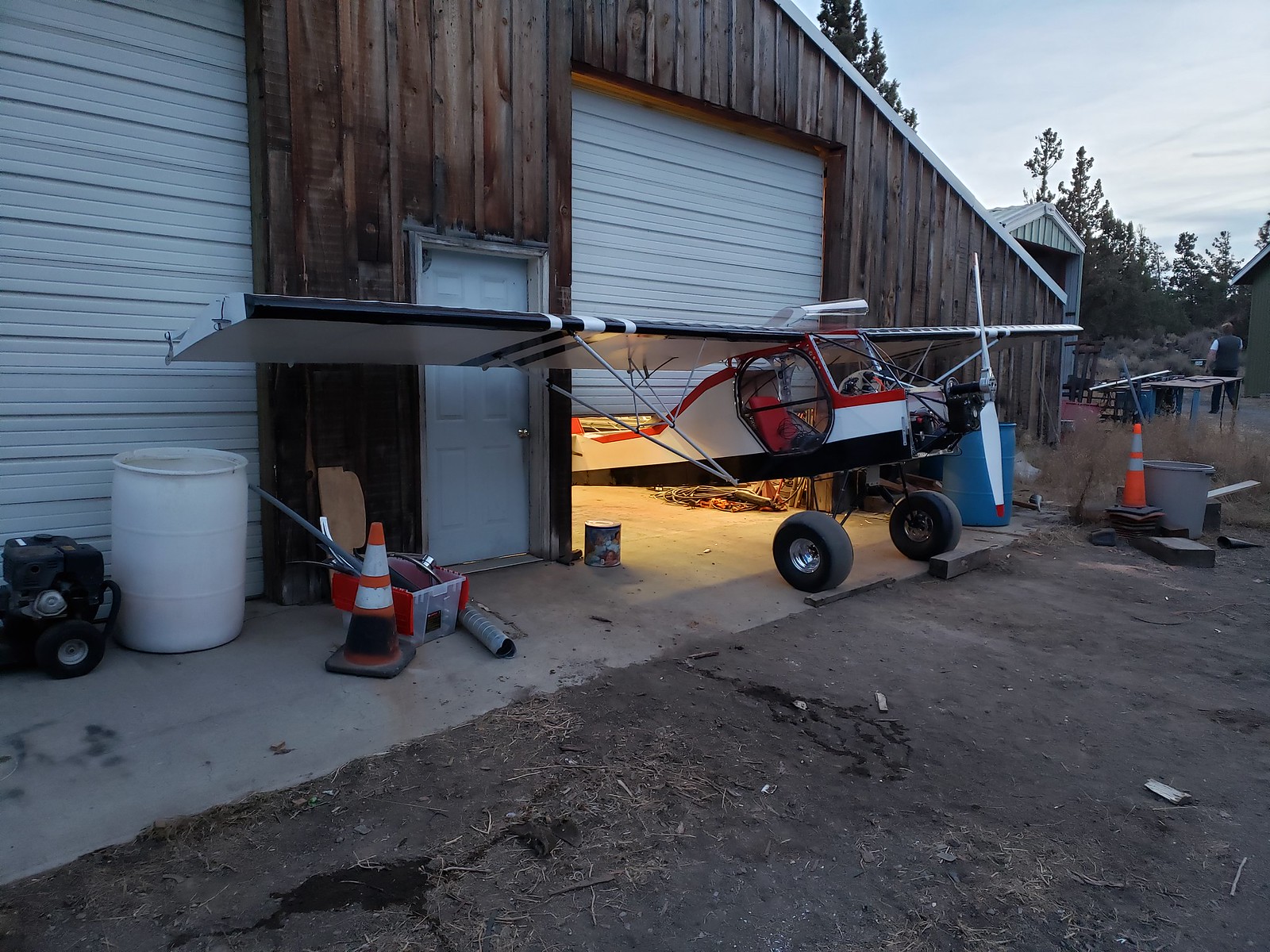 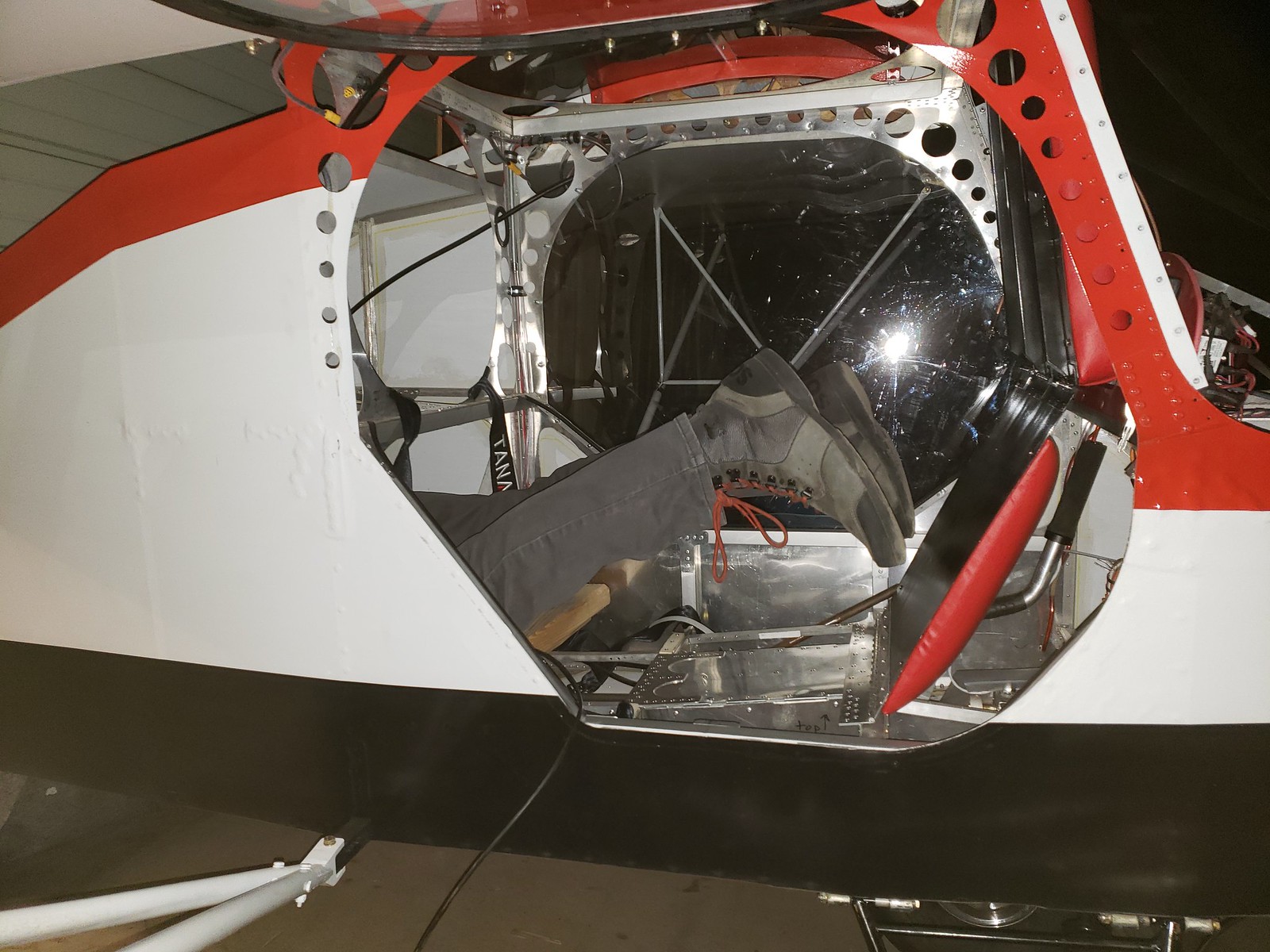 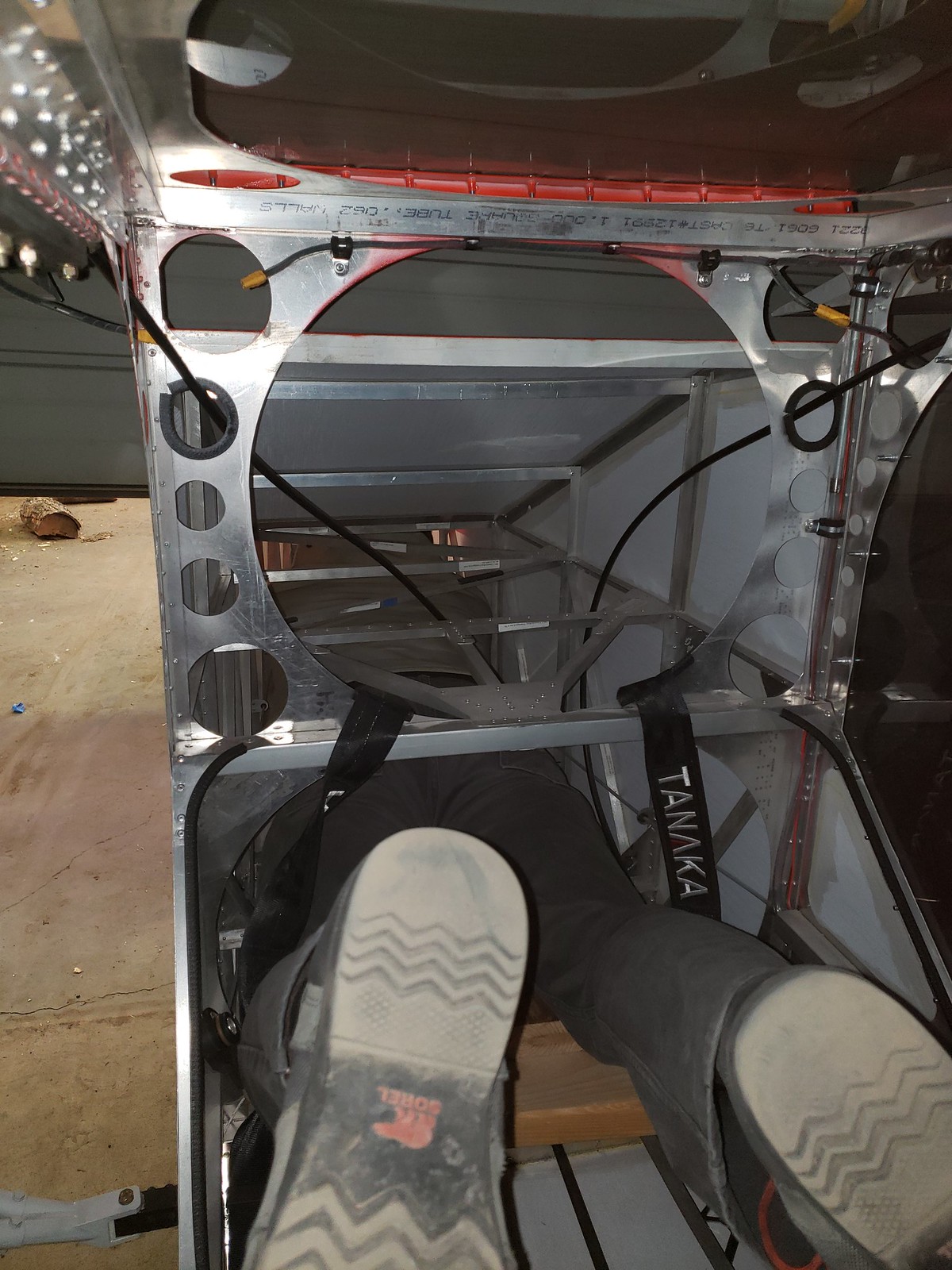 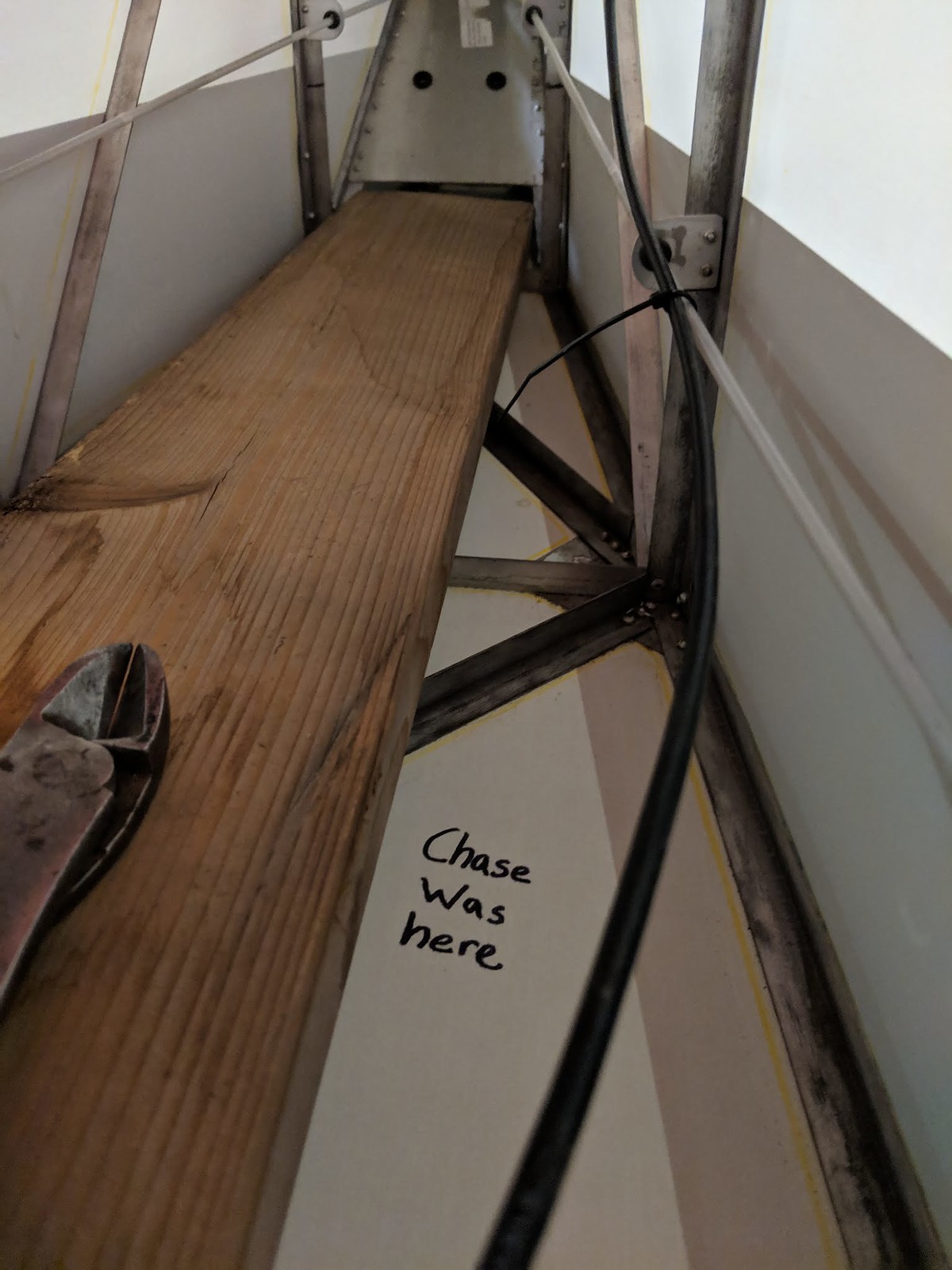 Awesome. It would suck to crawl back there and get stuck.

Seems like there is a lot of empty space back there. Too bad it can't be utilized for something. A bunch of helium balloons?
"One test is worth a thousand opinions"
Top

This reminds me of the DeHavilland Mosquito. It was built as a left and right side all the way down the assembly line. Then the two halves were joined after the last test and inspection.

Wow !
That mention of Mosquito's gave me the chills

Yesterday i heard of the passing of an old aquaintance (father of a friend) that i had known for several years as just "another old guy"..before i learned that he had earned his "wings". flying Mosquito night fighters on incursion raids over Germany in the '40s. ..low level, high speed, night raids for precision bombing of secret targets , airfields, etc
I guess the pilots amongst you can imagine what that must have been like , in those aircraft , for ( at that time) a 20 year old.!
He instantly earned my maximum respect !

And i learned not to pre judge anyone.
This forum owes its existence to Justin of ebikes.ca
Top

Awesome looking little bird, it has a "just right" stance, some planes don't, though they may fly OK. All the lightening holes are good to see, nothing worse then hauling around unneeded material. Putting lightening holes in everything can be addictive, a good habit to have.

So what was the final all up weight?
Top

Heya all! Quick update on the Electric Belite.

The Flight report so far:

Three hours and 27 landings in. This last flight, the squawk list had nothing on it to start the flight, and no new entries to add at the end of the flight.

Now that the squawk list is clear, it is time to start filling out the Poh data. So there will be several flights coming up determining stall speed, best glide speed and also bringing in operation of the flaps and determining flap performance for short feild takeoffs and landings.
Test Review Revise Repeat
Top

OMG, congratulations man! I never had even a slightest bit of doubt in your success

Heya all! Back at it! I finally got the courage, time and energy all lined up to open up the wing after the snow damage it sustained last winter. Looks like things aren't as broken as I thought, and it looks like its it's going to be a pretty easy fix.

Hope you'll have it fixed soon. It's a really nice project to follow. Photo's of the process are appreciated here

.. whoo ha !.. what happened there ?....did we miss some “event” ?
This forum owes its existence to Justin of ebikes.ca
Top
Post Reply
235 posts