After a highly reliable and fun 4000KM using a 250w Dillenger front hub 10AHr kit I thought I'd be in a good position to compare it to a 350w BBS01 Bafang kit.

My Dillienger kit has been great. The road test thread's here:http://endless-sphere.com/forums/viewto ... =4&t=56711


Two Boxes
Two boxes arrived today only two weeks after payment. I thought this was OK. Here's everything in the kit: 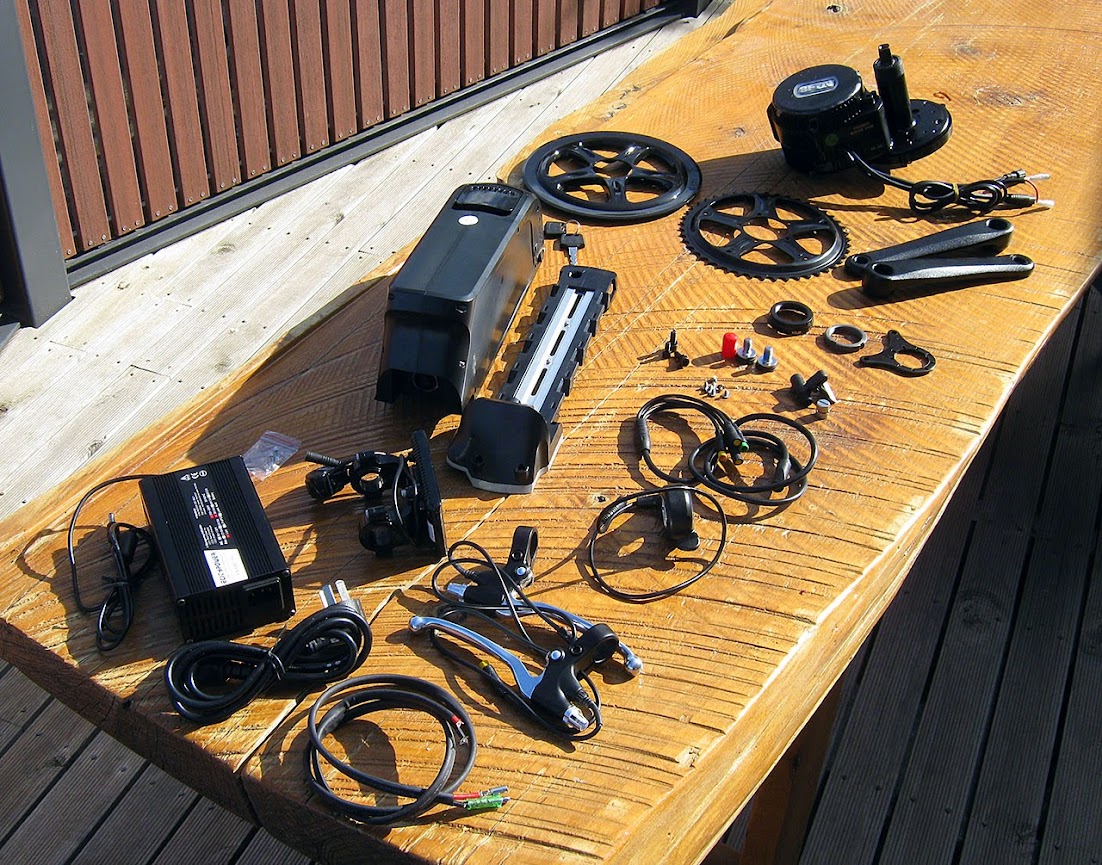 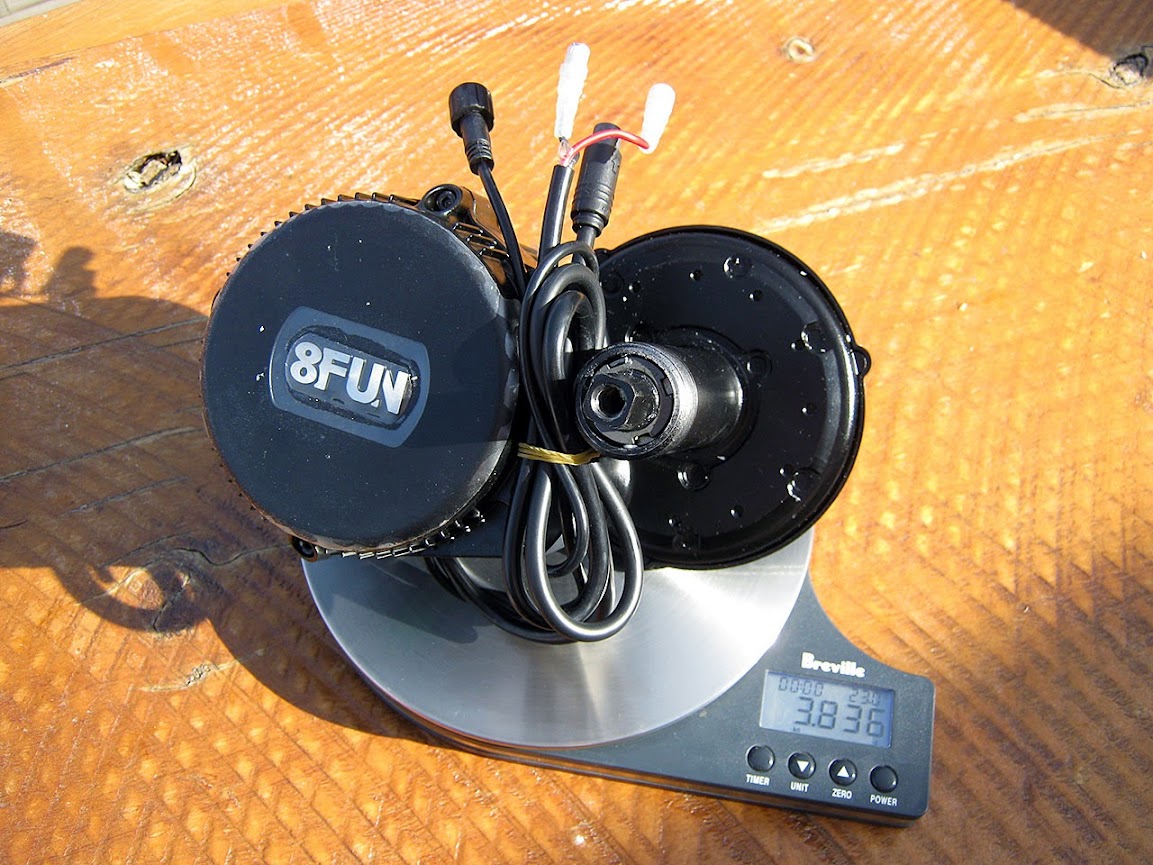 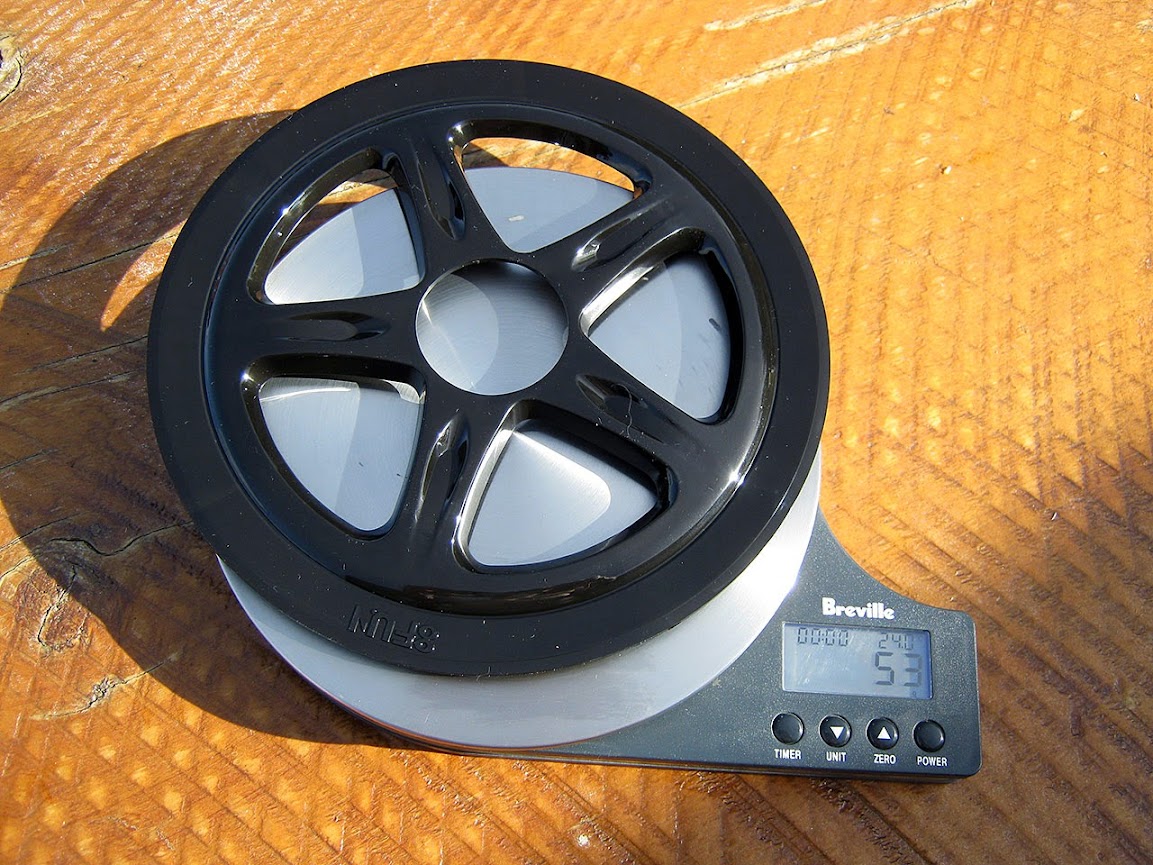 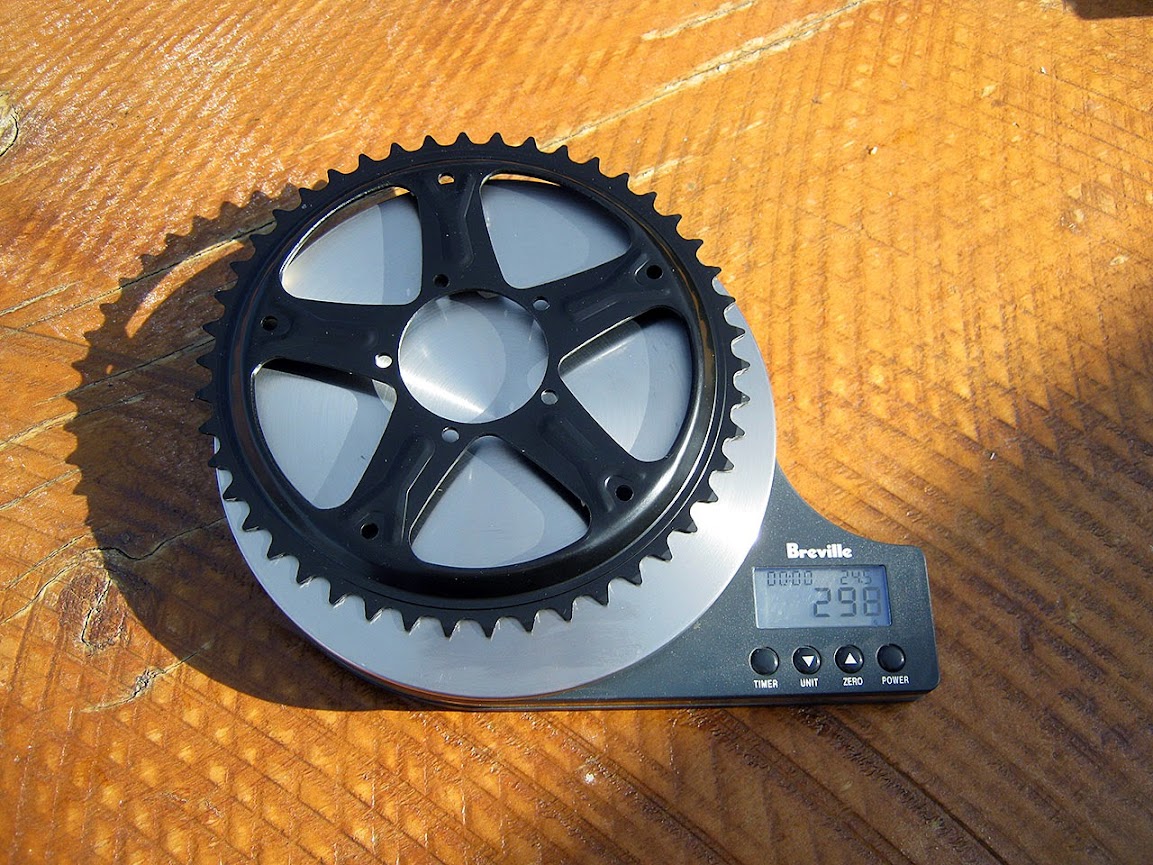 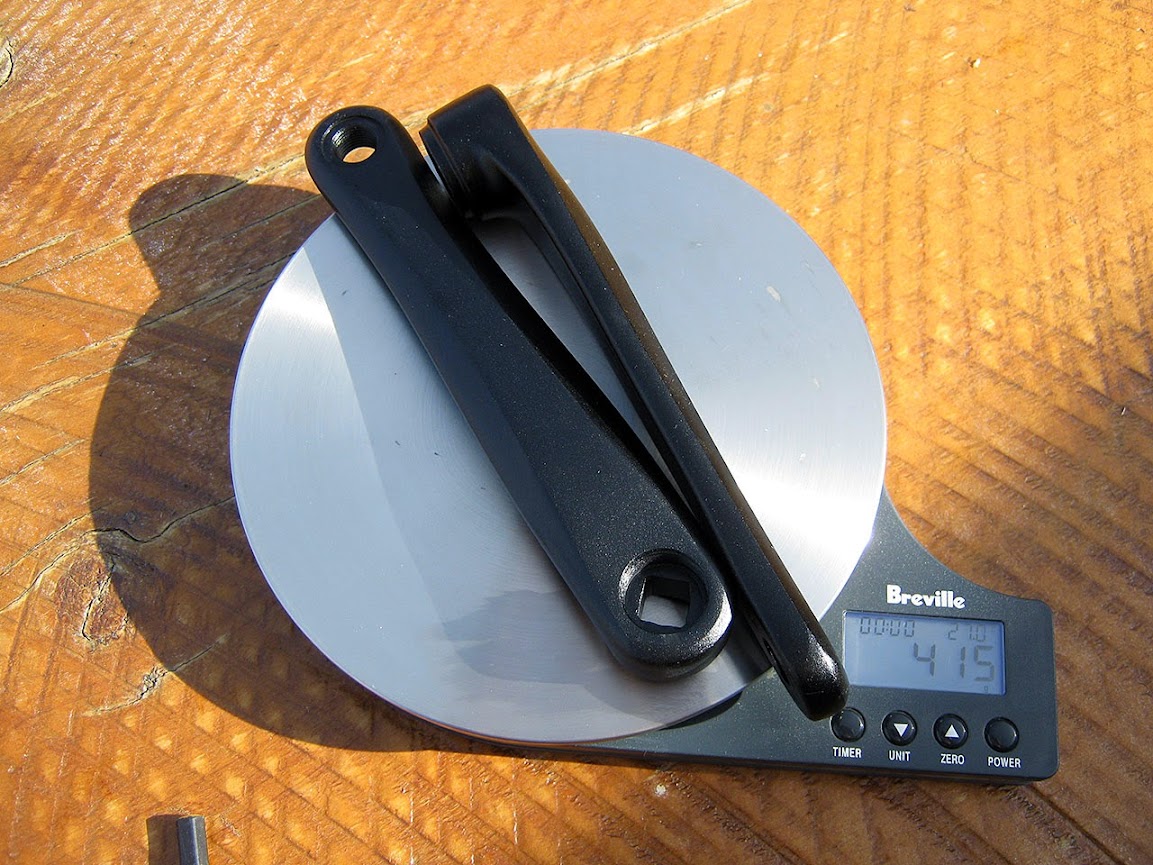 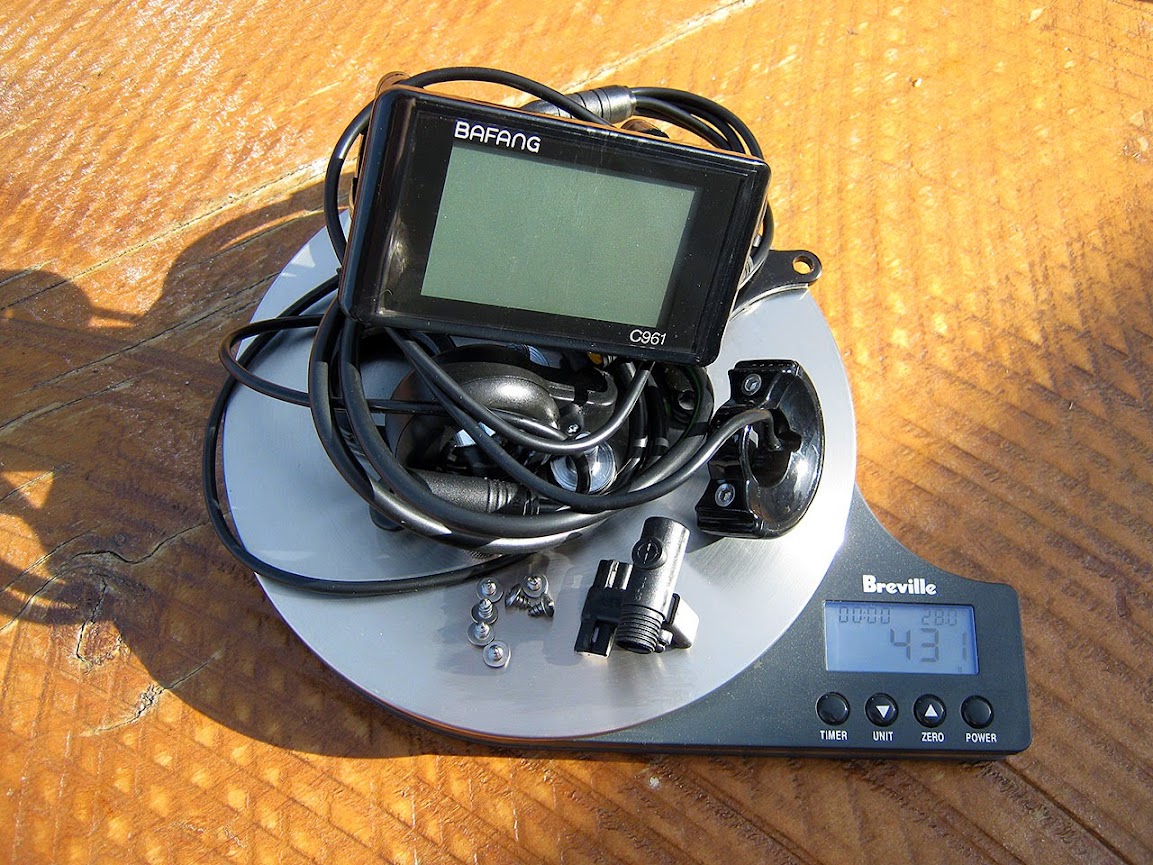 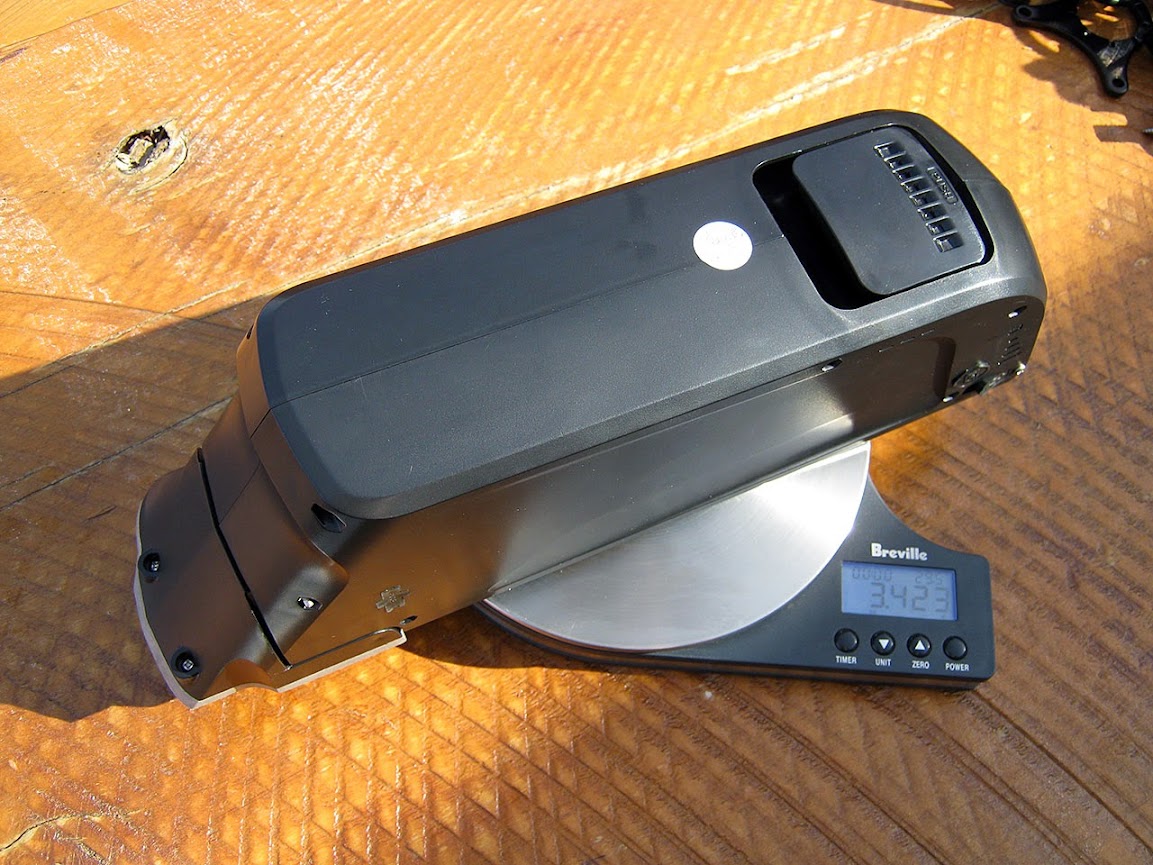 Looking forward to this thread - let me know the difference in cruising speed. I take it you're sticking with 36v?
Top

Hi Tats,
Yes, 36v 14.5AHr.
The Dillenger has been great but the 35kmh is a little limiting.
I expect this set-up will make the bike lighter (but not by much) and faster.
I get 60km range with the Dillenger kit and the 10AHr pack, so another 20km might be possible with this combo.

It's not a plug n' play situation though, the battery is from BMS and needs a power lead routed into the base through
the rubber grommet holes then soldered on internally to the socket pins.

They supply a lead with average quality connectors.

I'm tempted to simply bypass the connectors and solder the motor power lead into the socket.
If I need to remove the motor the battery base unit can be removed with it.
250w Dillenger front hub build https://endless-sphere.com/forums/viewt ... =4&t=56711
350w Bafang Mid-Drive build https://endless-sphere.com/forums/viewt ... =4&t=64837
Top

Thanks for the breakdown of weights for the BBS01. This is very helpful information as I'm looking to convert a lightweight bike so will be totting up the grams!

Another plus with the mid-drive is handling I expect. The front hub set-up adds 3Kg to the front wheel so agility suffers.
One advantage of a front-drive however, is the accurate way you can direct the thrust; you can angle your wheel to better suit the terrain.

I can't wait to get home and start wiring it all up. Today might be the last trip the Dillenger system makes on this bike. 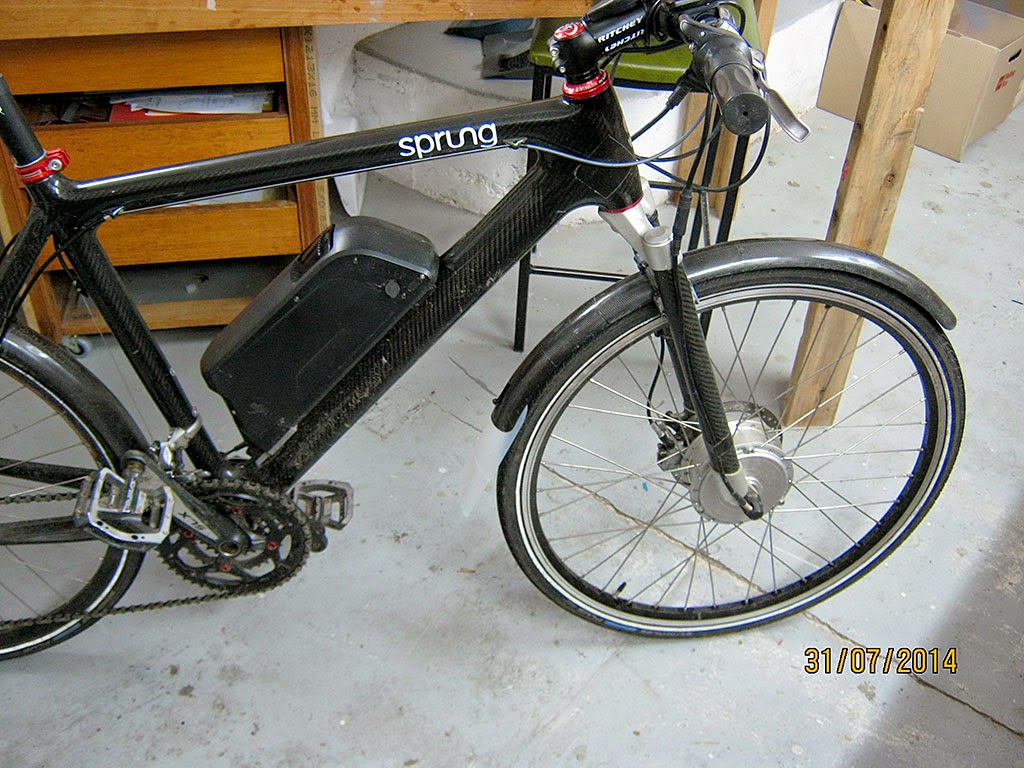 Fancy a Bafang install video performed by a Czech hottie ?

One thing to note
I charged the battery using their fan-cooled changer. The cooling fan works, the charger stays cool but it's noisy.
There's an on-off switch on the pack and you'd think pushing it in would activate the pack.

This isn't the case, pushing it turns it off.

Anyone else experienced similar?

My other pack which is identical apart from cell capacity works as you'd expect it to. You push the button to activate it.

Any updates on his the BBS compares against the Dillenger mate? Still struggling with my PAS...
Top

Hi Tats,
Sorry to hear your PAS is a PITA.

I haven't had a chance to install the BBS01 yet. Likely this weekend; there's an MTB event I'm off to on Sunday and I'll degrade the bike to human propulsion only
after which I'll install the new system.
250w Dillenger front hub build https://endless-sphere.com/forums/viewt ... =4&t=56711
350w Bafang Mid-Drive build https://endless-sphere.com/forums/viewt ... =4&t=64837
Top 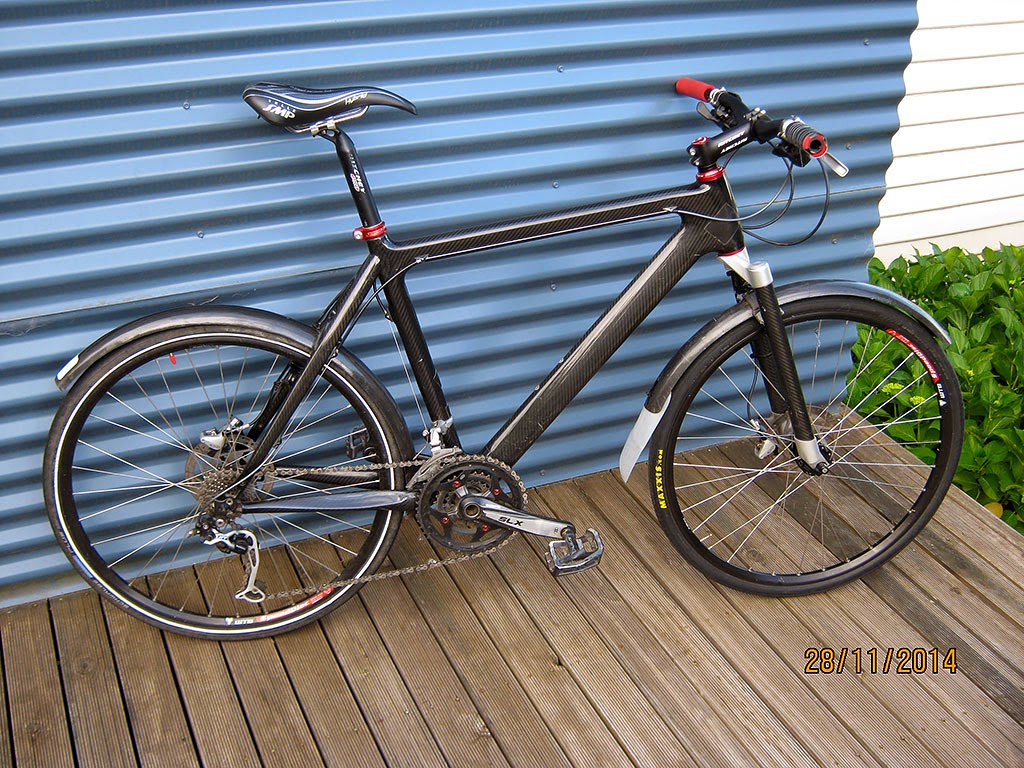 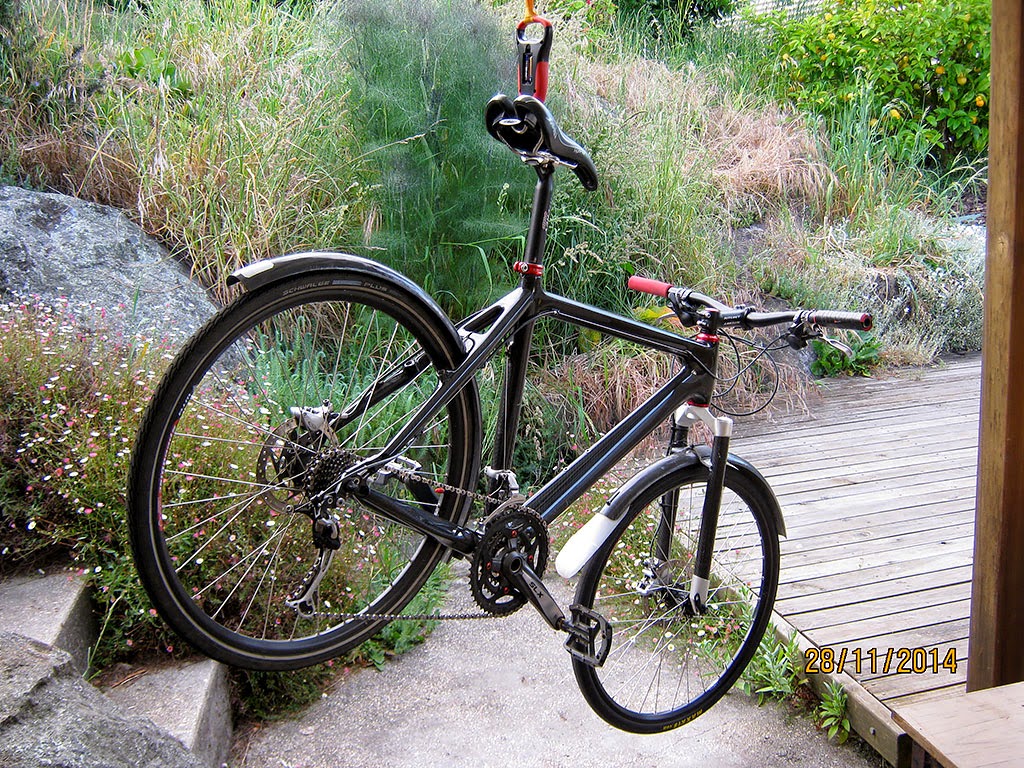 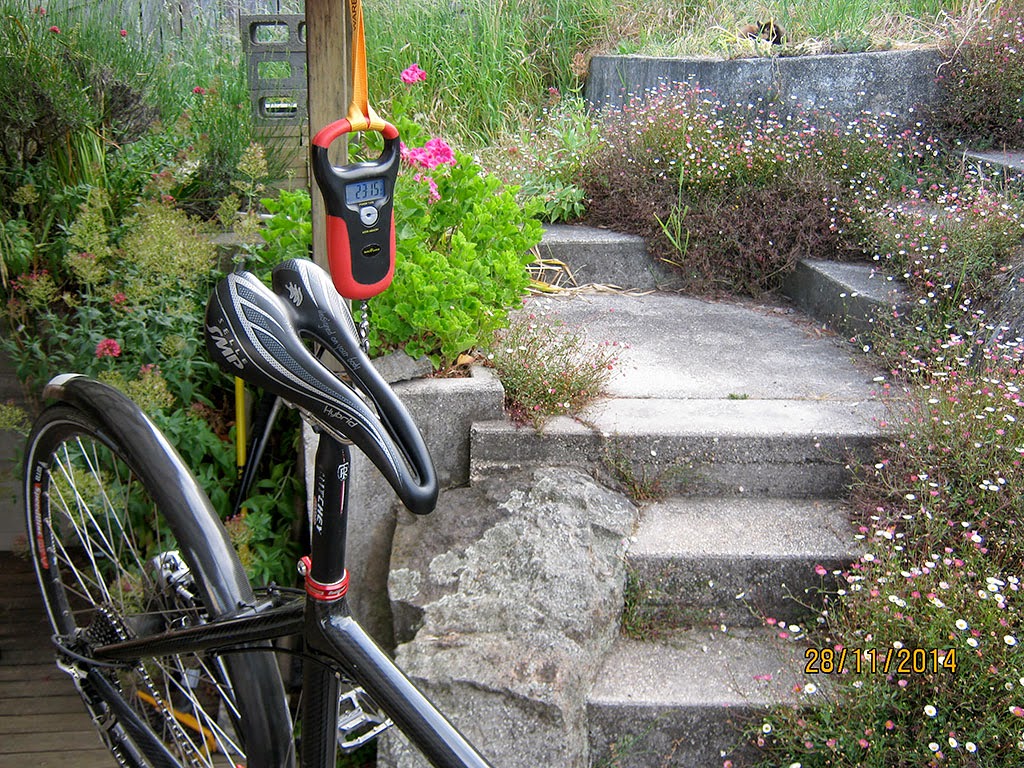 I haven't seen this mentioned in the official Bafang install manual or any YouTube install videos with the exception
of the Czech Rep lady installer....you can see the "gap" (below) in her video but her install continues without addressing it.

There's a gap between the "fixing plate" and the BBS01 body.
Is this a problem? I imagine it would be as you torque the M6 blts up it must distort the plate. 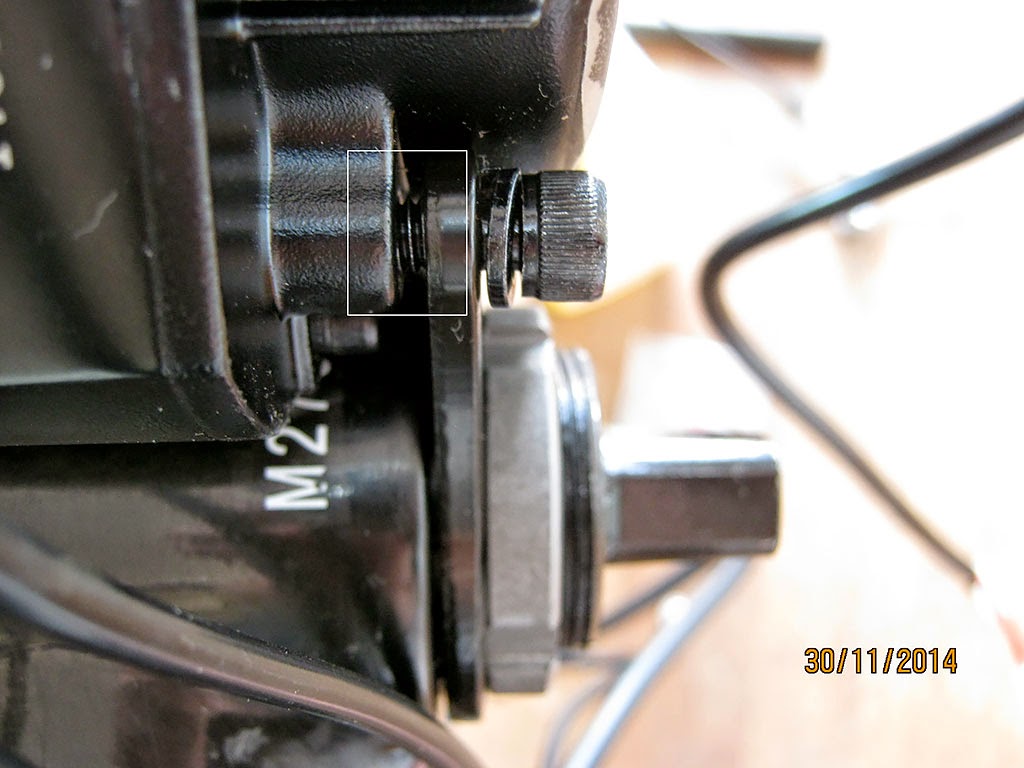 Measured the BB and it's precisely 68mm spec.
Sourced two washers that, with a bit of grindage will fit. 1mm thick guesstimate. 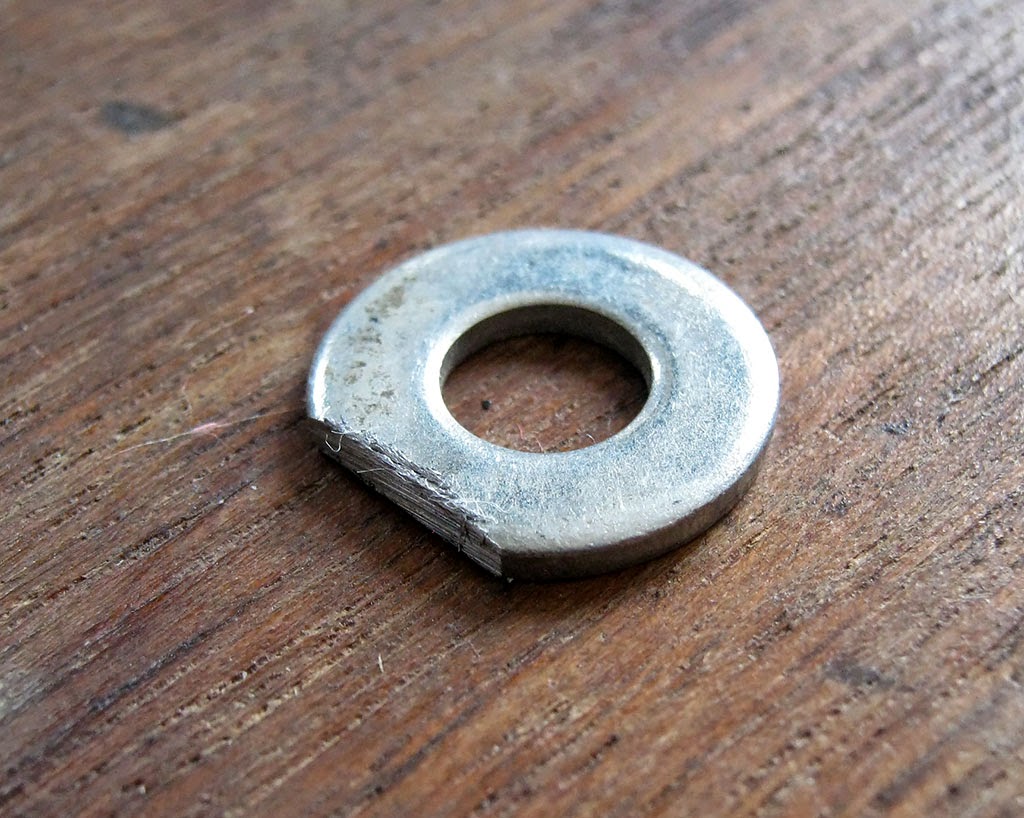 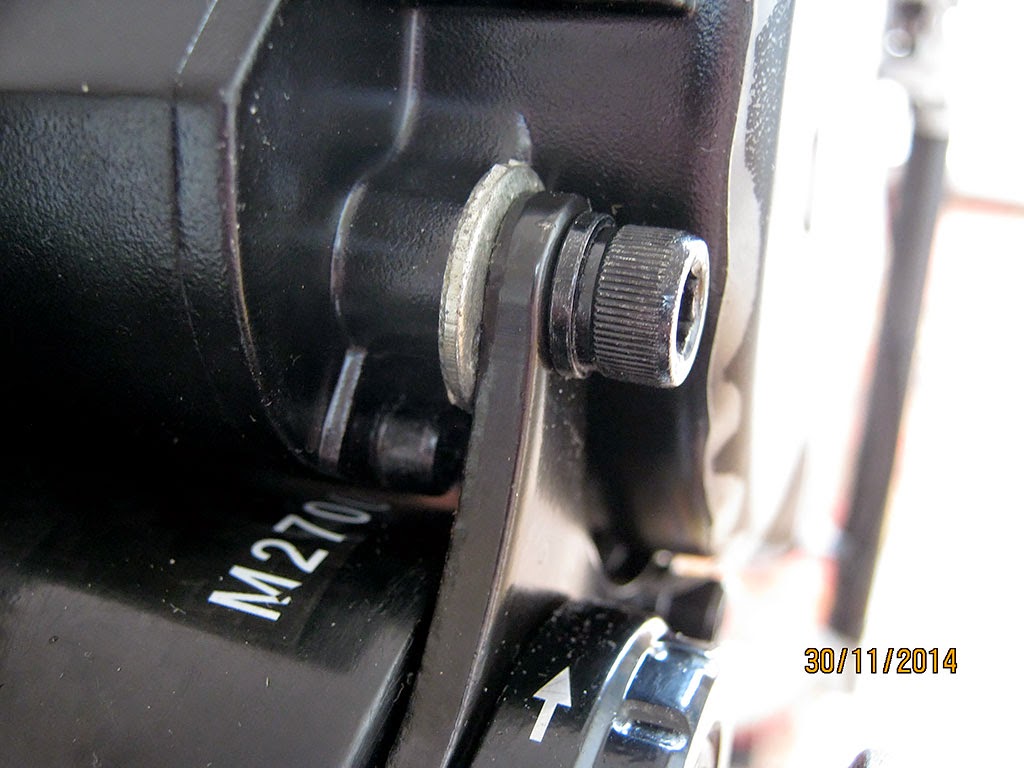 What seems to be a new refinement, the lock ring has evolved into a lock-ring cap: 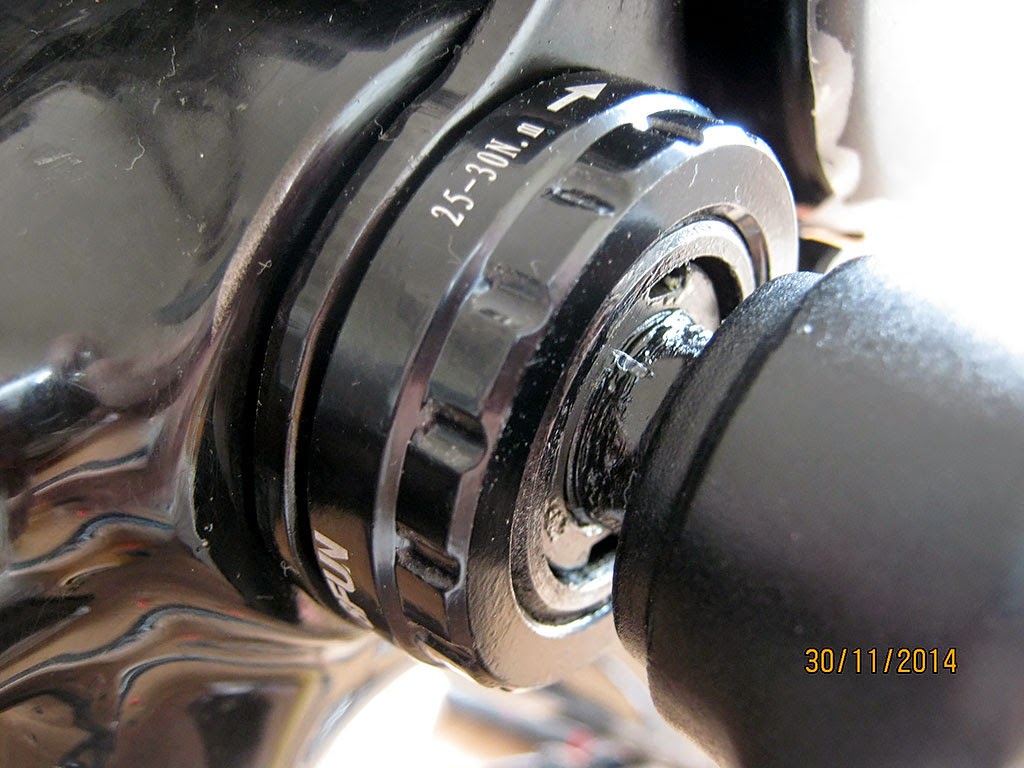 This is a first; the rotten bottle cage screw snapped off while fixing the battery holder: 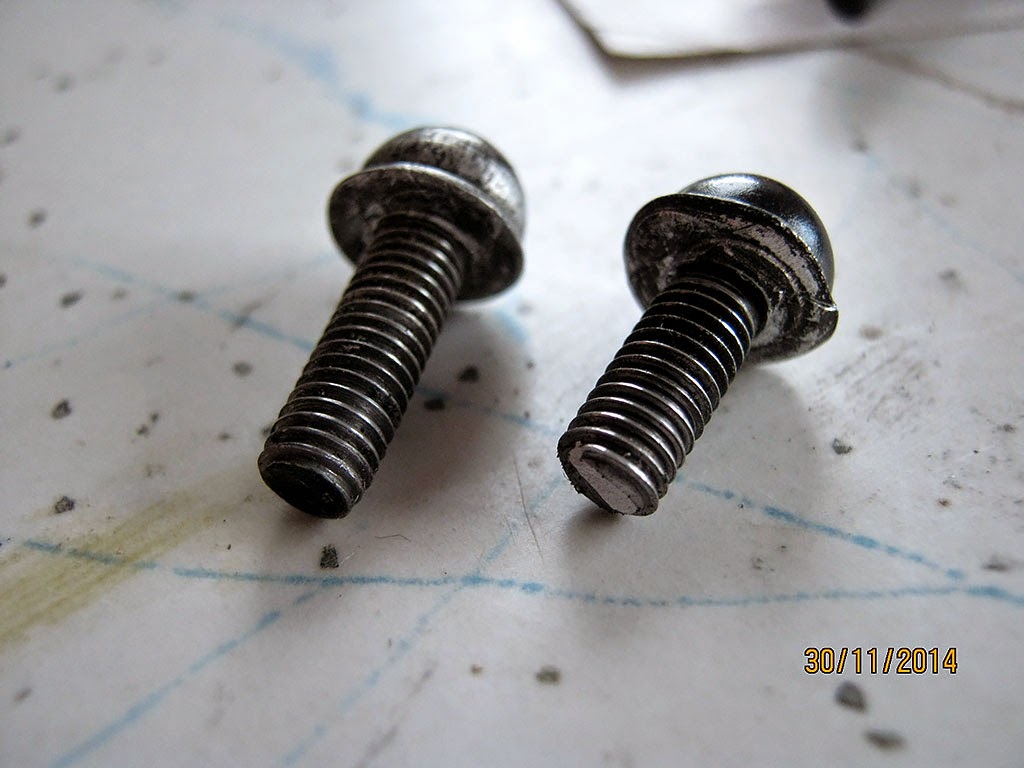 This is going to have to keep 'til tomorrow; I'm having dinner and a drink. 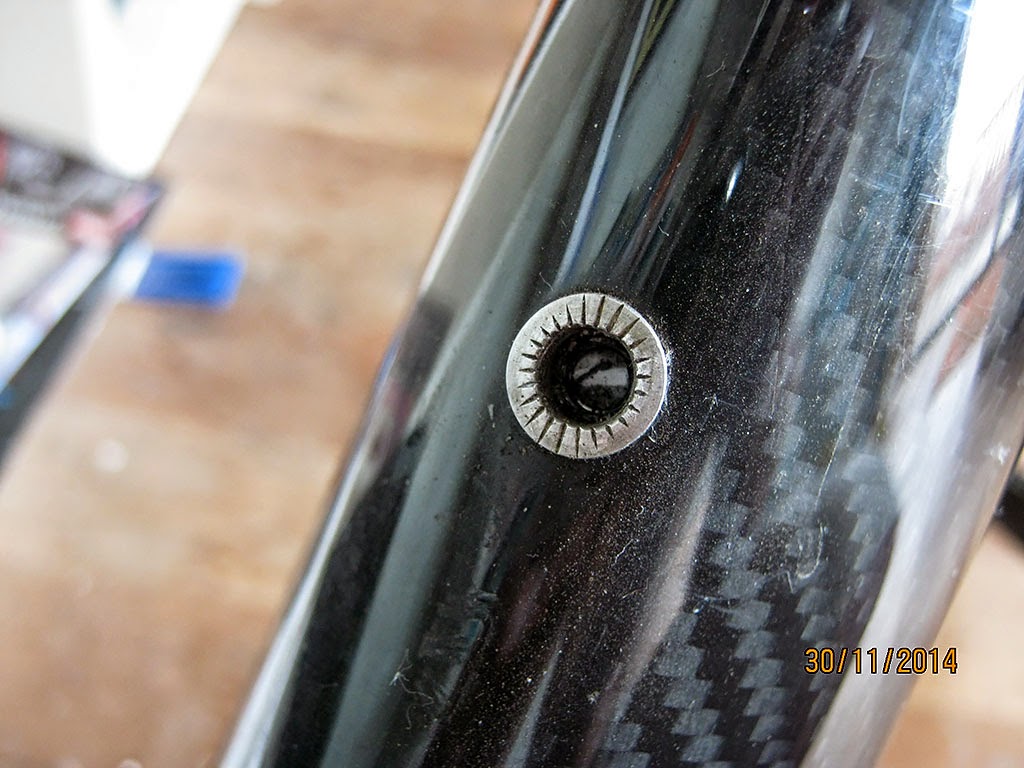 Battery Mounted
Drilled the stuck bolt end with a .6mm drill and it just fell out inside the frame. Just a small chunk that can stay there for all I care.

Battery holder now mounted with a longer and newer pair of bolts.
I decided against using their long battery lead extension and instead soldered the leads to the terminals after threading them through the
cable grommets in the base of the mount. Shorter leads = less resistance = less cabling to worry about. 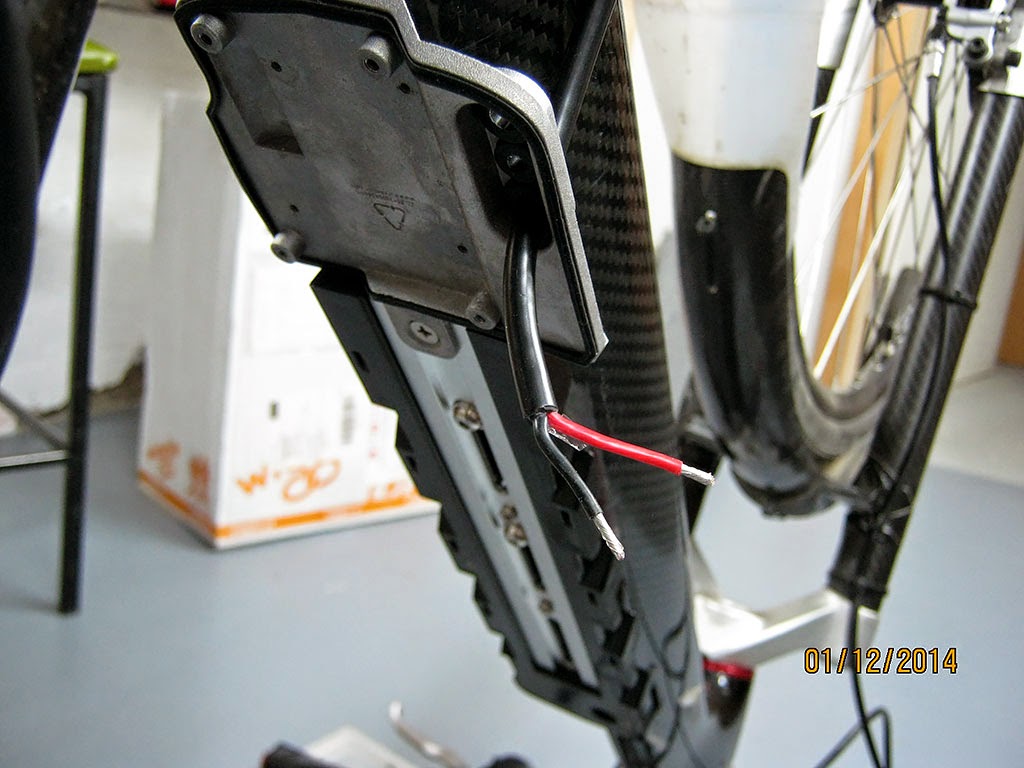 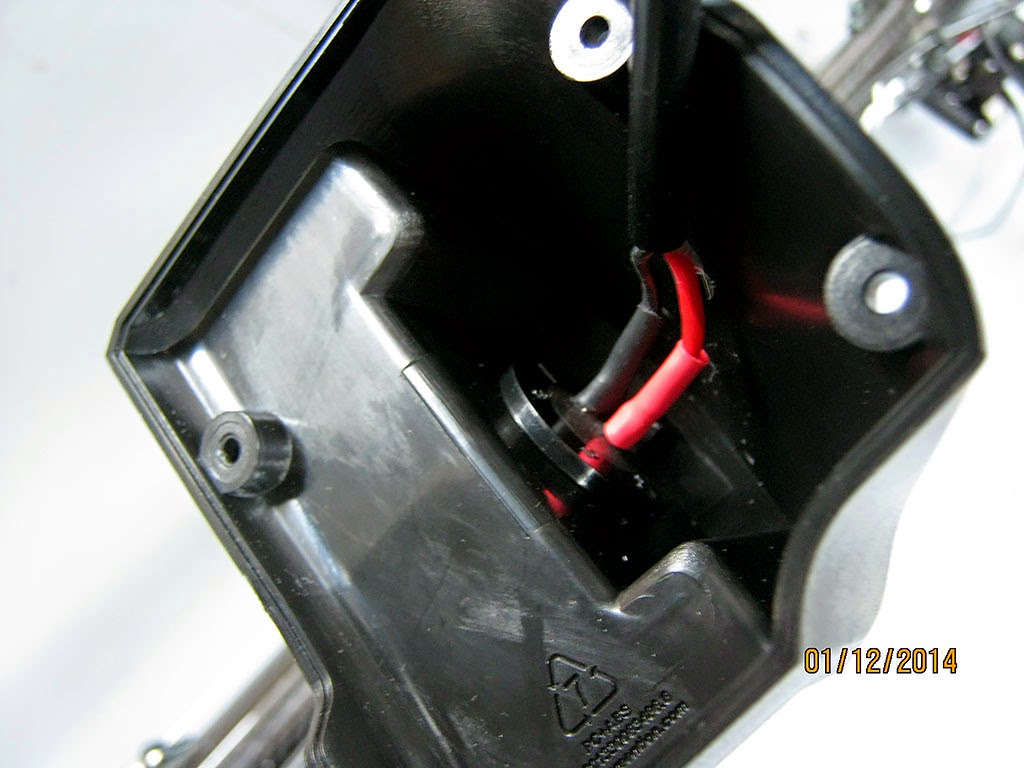 It Goes.
You know that moment before you fire it up where you hope it works but experience tells you to expect the worst? I had it for a split second but
thankfully everything powered-up.

I lashed the cables with gaffer tape and took it for spin.

At this early stage it seems comparable to the hub system. It's slower to accelerate but it's more agile.
The BB is smooth, in fact the entire drivetrain is smooth.

With power off, pedalling is far easier than the hub system.

The hub system was 17.92 but that was with a 350g penalty with heavier Schwalbe Marathon front tyre.
So the Bafang 250w is heavier by 290g.

I was hoping for a lighter result since the front derailleur / lever and triple chain ring are gone.

I was also hoping for more pedal assistance to match what I'm used to on the hub system.

Interesting - I went back to the Dillenger controller this morning as a trial after using the Lyen controller for a week. Mostly because the PAS isn't working yet and I'm getting a stiff arm using throttle all the way, especially when out of the saddle.

The Dillenger controller is torquey, with PAS its great off the mark with a very quick ramp up speed compared to the Lyen. Its also much quieter up to 22kmh. But ... from 22kmh and up the Lyen has it beat for top speed (+10% quicker), acceleration and quietness. The Lyen also seems to be much more economic with about 2 volts extra left on the battery. Need to get the PAS working on the Lyen controller and tune the ramp up to make it a bit more torquey.
Top

It's not - the individual weights are given at the top of this thread, and the motor unit weighed 3.8kg. However the total weight gain over the base bike is 7kg, which includes the battery pack, crank arms, display and everything else.

One thing I forgot to mention is the throttle lever offers far greater assistance than the pedal sensor when wide-open.

On wide-open the acceleration is pretty close, if not better, than the hub system. The lever provides a "turbo" boost
but only after 90 % of travel and I may need longer thumbs since the travel is a little awkward to utilise.

Finding the best angle for the lever is next.

So what would be the true weight difference with the 250w motor? 1kg?
Help me find my stolen electric brompton: http://bit.ly/1a0vbBC and Bosch Sinus B3 http://bit.ly/1eV0WQz
Top

Not sure I understand the question cwah but the bike is 290g heavier with the Bafang system.
I can weigh the Dillenger hub system and post the data when I get a chance if that's what you're after.

Commute Number One
The first commute to work and back had a healthy morning headwind but the speedo indicated around 3-5 kmh faster than the old system.
There's no easy way of telling how similar the speedometers are between bikes. The Bafang indicates faster overall but it doesn't feel any faster.

The acceleration is less pronounced than the hub system. I played around with normal and advanced settings but I reckon there's still a lot I don't know
about programming it. I'm after more rapid initial acceleration.

This is where the throttle lever is fun. It's like a TURBO button. Turning it all the way definitely gives you more assistance than normal; it's great for short bursts.

Endurance?
I've done work and back and the battery is yet to come off max bar indicators. Even under heavy load the meter didn't move. I'll see how far I get this week without charging it.

Handling
Far better than the hub motor; if you bunny-hop over kerbs, this is the system to get. Overall more stable and agile than the front hub system.

Chainring
The standard chainring is 46 tooth. I may fit a 48T later on; same as the Dillenger system.

The cockpit is a little less-cluttered: 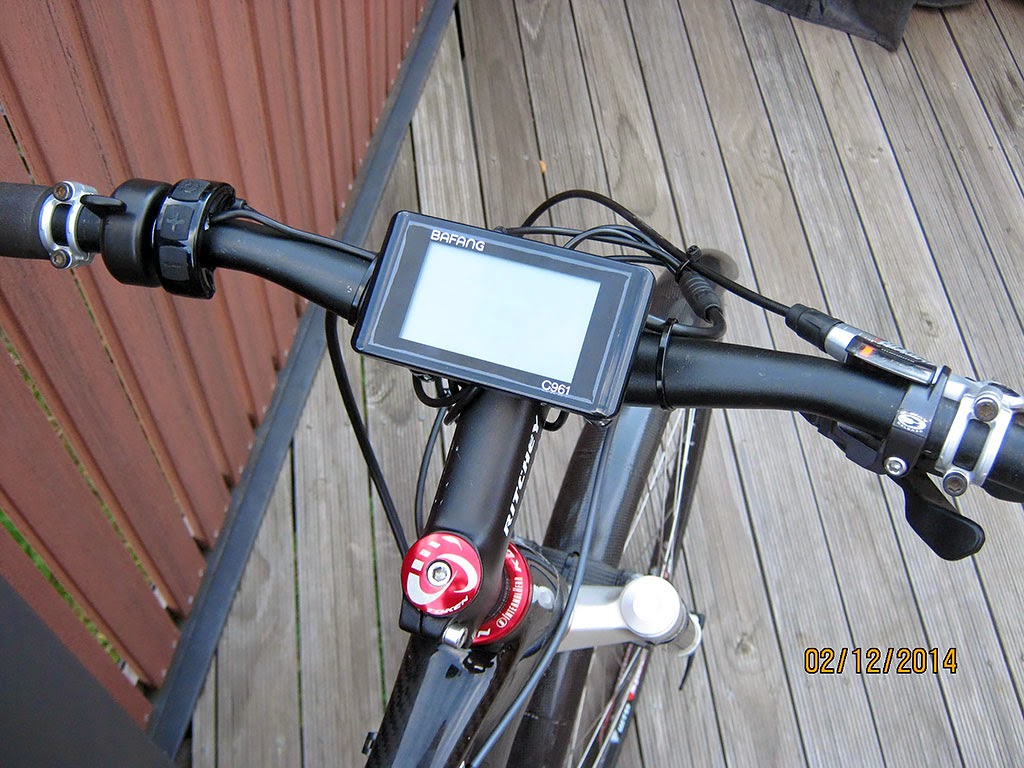 The system installed without major problems. gaffer and tie-wraps to tidy-up the wiring. 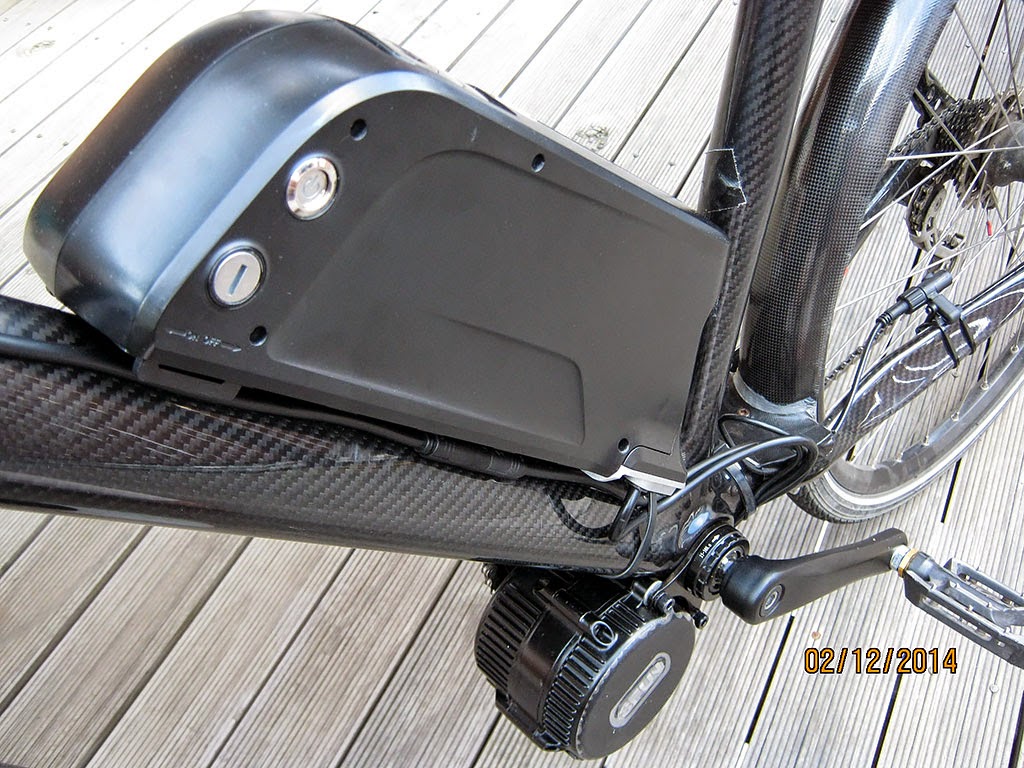 byebyepetrol wrote:One thing I forgot to mention is the throttle lever offers far greater assistance than the pedal sensor when wide-open.

Yes, I think I read this on the programming thread - that the unit is set for lower assistance via PAS than throttle, but that can be altered. Can't remember which screen it's on though.

Have ordered a BBS01 myself, and just on the hunt for a suitable host bike.

Good to hear there is an indicated performance upgrade - I ran out of battery on my commute to work yesterday for the 1st time. 20+kmh direct headwind doing less than 28kmh for 20ks. Having seen that current draw gets less as the motor is spinning faster I'm assuming for a lot of the commute I was in the low teens current draw. The cut-out was on an uphill section about 400m from work - a power off/on on the battery pack got me going again.

Tats; good to hear the on/off cycle got you over the line.
imagine the headwind without electric muscles. Credit for those who commute without but IMHO it's a little masochistic.

No probs thus far with my set-up. Changing gear under load isn't the problem I expected although it is to be avoided; change down on no-load before you come to a stop.

Turbo Button
The Turbo button got a workout today; it's been a humid old day here and I didn't feel like busting my guts to get home. 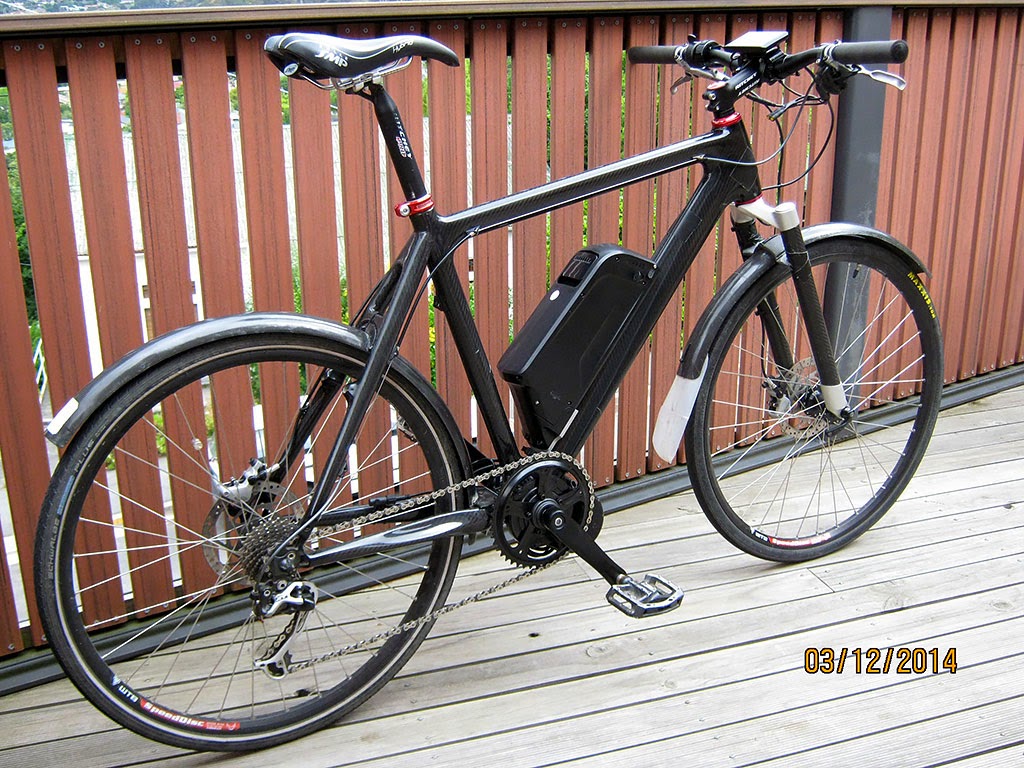 byebyepetrol wrote:Not sure I understand the question cwah but the bike is 290g heavier with the Bafang system.
I can weigh the Dillenger hub system and post the data when I get a chance if that's what you're after.

what I'm trying to understand if the bbs02 added to a bike is actually lighter than it seems. Because you remove some of the bike weight when you add the motor such as the bottom bracket and front derailler. Controller is also integrated.

When you are using a hub, you only add weight and wiring + controller on top of that.