FRAME / OTHER:
The frame was fortified and weleded where it cracked.
The Rivnuts were all welded to the frame so they can not move now.
The side panels were welded and cleaned up so they don’t separate.
All of the wires going though the frame are held in place via Velcro. 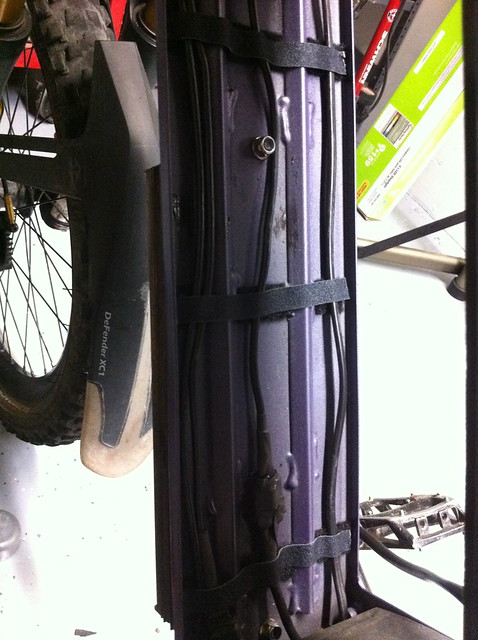 The stock strips of foam that are along the edge of the battery box were replaced with bespoke custom cut neoprene. 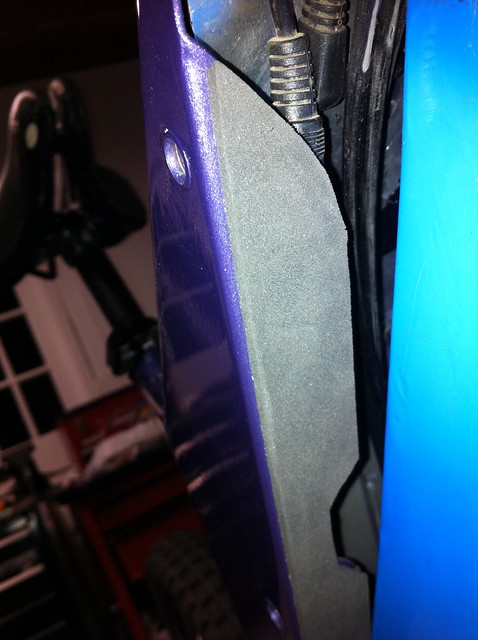 All exterior bolts have a nylon washer on them so as to not damage the finish.
The swing arm as custom cut neoprene pieces on the top and the bottom on the chain side so you cannot hear the chain at all anymore! The chain slap used to drive me nuts!!
The side cover bolts all have a dab of silicone on them so they don’t back out.
The side panels have single piece gaskets where they touch the frame so as to not F-up the paint on the frame. 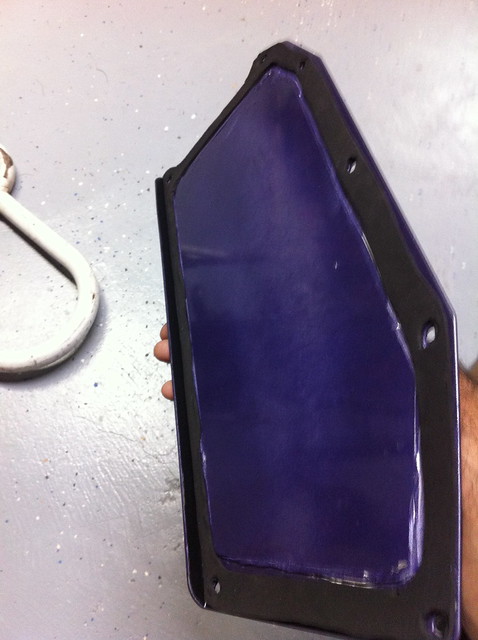 The controller has neoprene on it where it touches the frame and also has 4 spacers stabilizing the controller.
Last edited by 1abv on Jul 03 2016 3:21am, edited 1 time in total.
Top

VBOXX:
Replaced both the swingarm bearings…you will need a special tool to do this and take care on the chain side. You can totally screw the Vboxx if you move the inner piece too much.
Put in a shit ton more grease. Superlube baby use a veterinary syringe to shoot it in.
The aluminum bolt that holds the front chain gear has play in it so I put a rubber washer underneath it. 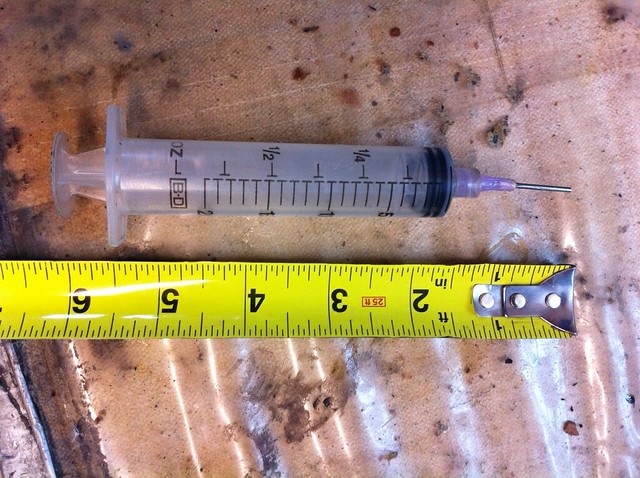 THE RESULT:
Pic from the day I put it back together. I repainted it Plum Crazy Purple from the 1970 Challenger…Its not a rainbow paint job but depending on lighting it changes from purple to deep blue....Not one ride on it….The bike will never ever ever..look this good ever again 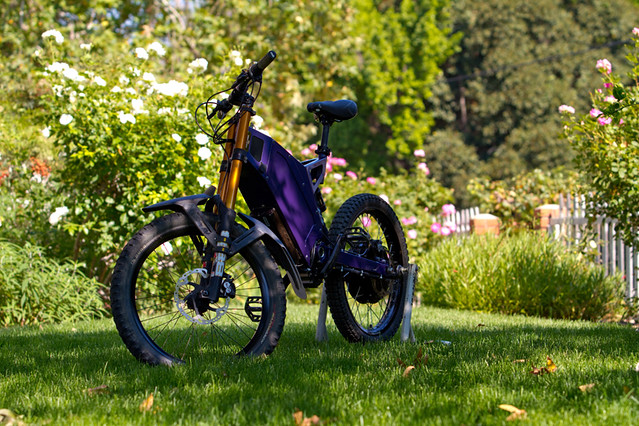 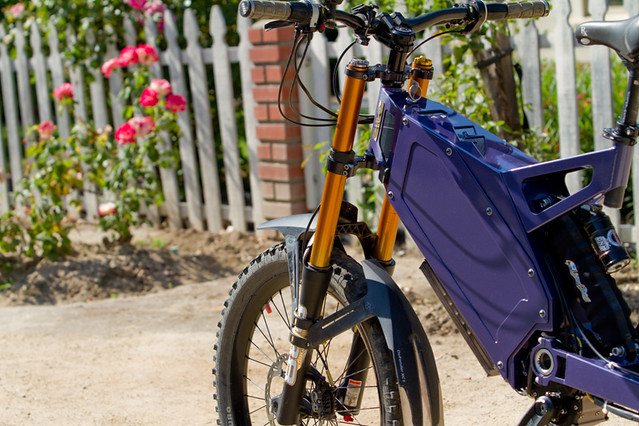 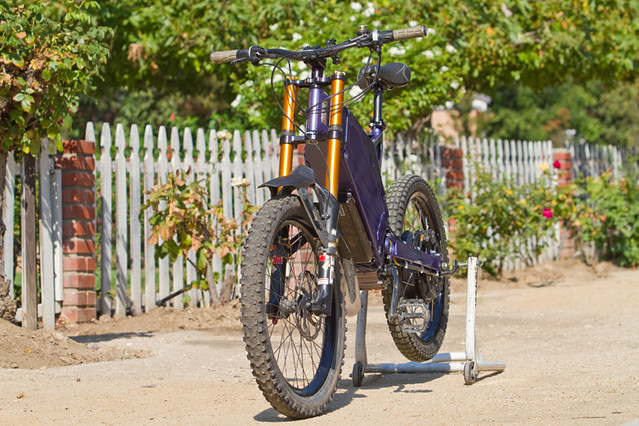 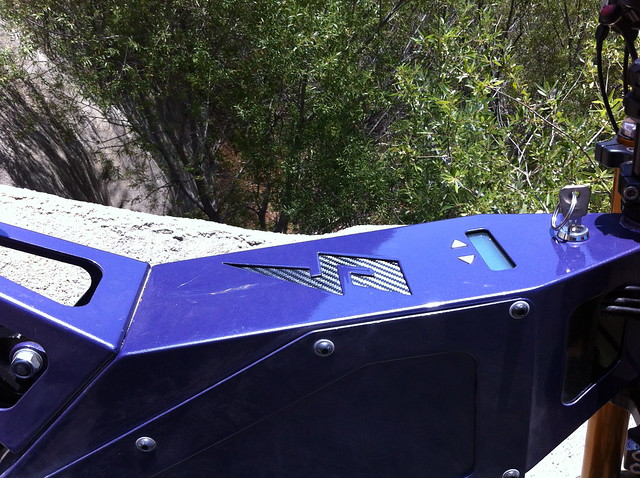 So on my first ride I set up the thermistor and found out that I hit thermal rollback in about 15min of my normal riding and was hitting 120 soon after….

Well that told me 2 things..I must have been going well over 120 on a regular basis before all of this hence the solder and the phase wires melting and de soldering…and the other thing is that motor took all that abuse like a champ! Literally for years I must have been running over 120 degrees Madd props on how much heat that motor can take!
So I figured if I went downhill w/o motor that it would rapidly cool down.. wrong!!! The motor retained its heat and refused to go down.. this was very depressing.. I felt like I couldn’t ride the way I wanted to..

Then… come to today.. where I added statorade.. Holy crap!!! The shit works like magic! Stays cooler and cools down way quicker. Drops a degree in a matter of seconds now ….and I found I used less battery than before because it was operating at a cooler temp and was more efficient. No mess and cools like a champ. Simply injected it into one of the breather holes near the outside of the motor and its good to go. Be interesting to see how long it works for and of it does anything negative to the motor. So far so good
Damn I love this bike!!! Way better then stock! Now if only I could turn it into a mid drive…….

FRAME:
Sponge Neoprene With Adhesive 1/16" Thick X 54" Wide X 1' Long for use on in the battery box, on the swing arm, and for the side covers.
VVIVID Epoxy High Gloss Black Carbon fiber Vinyl Automotive Car Wrap Film
GE silicone 2 for all cover bolts

ill continue to update as I remember stuff… hope this is helpful to some peeps!!
Top

Great work 1abv. Your obviously ride quite hard. Some really nice upgrades there. Really appreciate the time taken to document it all also.
Current Rides

1ab - Awesome build and write-up. I might be stealing some ideas shame-less-ly.
thanks!
sucka free since 1968
Top

DAMN 1ABV! Your bomber restoration came out sweet! The cracks in the frame, was that from only stress, or was there a little bit of rusting as well? I only ask because I haven't noticed any cracks on my yet. You are right about the shock, the spring is 700 pounds, mine is 750 pounds and worked perfectly for me when i weighed 260#, now I am down in the 220s and need to go with a lighter spring and revalve/rebuild. Will looking into that. Again very nicely done!
Top

Maybe we should all consider statorade. Where do you get it?
Top


This is not stealth, but I did get parts from familar vendors....... battery, controller, mxus motor........ sondor mxus mod in play now yahoo.

I had a 3 spd conversion which I hated...... so I installed a 12 t gear and went fixie. I'm thinking the 3000watt mxus should handle the bottom end fine..... and I'll PAS mid and up top.
Have to p/u some u-bolts to mnt the controller TV style on the seat post in front of the rear tire.
yaba daba doo!
sucka free since 1968
Top

Rix wrote:DAMN 1ABV! Your bomber restoration came out sweet! The cracks in the frame, was that from only stress, or was there a little bit of rusting as well? I only ask because I haven't noticed any cracks on my yet. You are right about the shock, the spring is 700 pounds, mine is 750 pounds and worked perfectly for me when i weighed 260#, now I am down in the 220s and need to go with a lighter spring and revalve/rebuild. Will looking into that. Again very nicely done!

Thanks everyone for the comments! It took a while and a few re-dos, (like pulling off the swing arm for different reasons like 4 times!!!) but eventually it came out pretty good.
Cracks were only from stress no rust on the frame at all. One of the side panels was cracked pretty bad as well but was welded and cleaned up,that was from a rock hit. To be honest I actually forgot where the crack was. The painters did a great job.
TV
here is a link to the company that sells it.
http://www.ebikes.ca/shop/experimental/statorade.html
I haven't had enough data for long term durability but in the few days I have been using it its been great.
Last edited by 1abv on Jul 04 2016 10:58am, edited 1 time in total.
Top

Will ordering some statoraids for mines too. Thx for link.
sucka free since 1968
Top

Happy Fourth of July to all USA stealth Riders!!
Top

Had my first spill on the mx us 6turn sondors ......the power delivery is strange there is a slight lag then a huge tq spike, and then another lag when you roll off throttle.....

So I'm coming off of a fun hill and decide to see how it wheelies.... I hit the throttle and pull back at 1st nothing then WHOOSH front end comes up then quickly past cog I'm like wtf... Hit the rear brakes no response!!! I roll down the hill on the side of the sondors.... Broke the seat turned bars.... Do the quick check to be sure no you tubers, then roll home in a non swag fashion. This thing has some tq!!!!
sucka free since 1968
Top

And now back to our regularly scheduled program.. 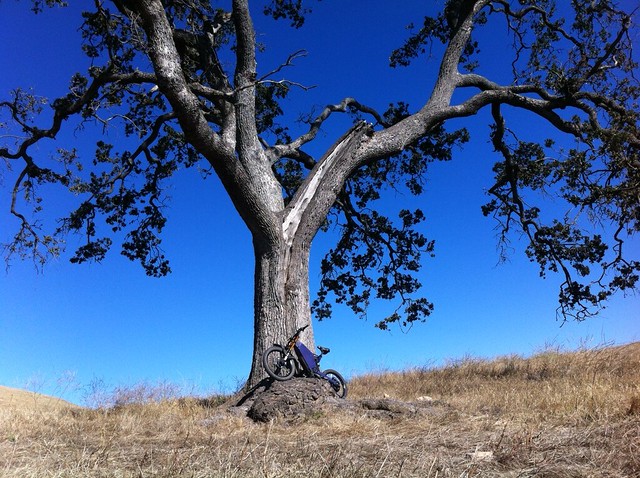 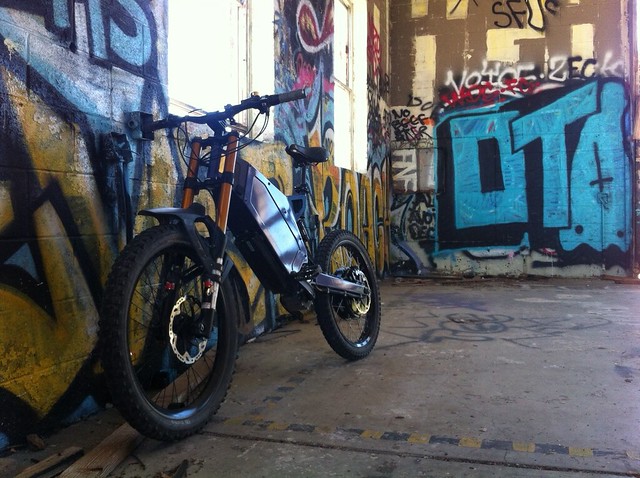 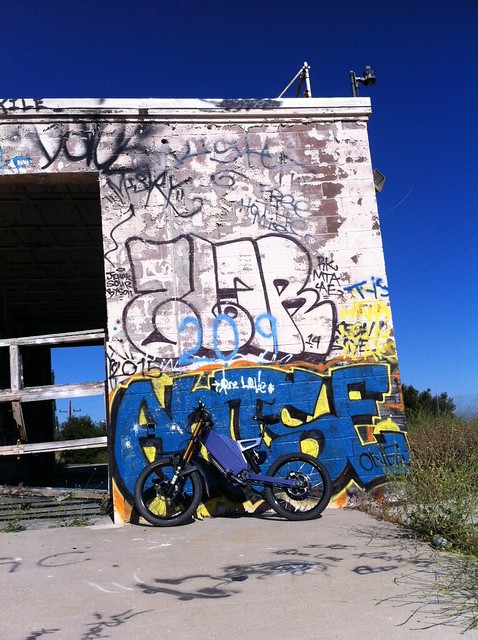 Hi folks,
Been a while since I've posted, though still peruse regularly.
I have cracked two frames the same as 1ABV, and the side covers also. Definitely flex/stress and why chromoly steel is the go; easy fix. The first Stealth replaced and the second they reinforced.
When I attempted to rip a vboxx off the bottom of the frame, Stealth swapped out the vboxx mount plates for the thicker plates they now use as standard and also reinforced inside the frame and reinforced the top shock mount that also started to crack.
The swingarm is currently down getting welded up after it started cracking along the inside top edge on one side in front and behind the cross brace.
A rewire might be in order for my Bomber as it has recently developed an intermittent momentary power cutout when I square edge hit the rear, suggesting a loose connection somewhere. I thought in the hub, though a hub strip hasn't revealed it, so the controller will be next to come apart while the swingarm is with Stealth in Melbourne.
Also, some maybe interested to know that I went for a custom 600-680 progressive spring from Cannon Racecraft and it is perfect for me. I weight 95kg (that's 209lb I think).
Cheers,
Clinton

Rix wrote:DAMN 1ABV! Your bomber restoration came out sweet! The cracks in the frame, was that from only stress, or was there a little bit of rusting as well? I only ask because I haven't noticed any cracks on my yet. You are right about the shock, the spring is 700 pounds, mine is 750 pounds and worked perfectly for me when i weighed 260#, now I am down in the 220s and need to go with a lighter spring and revalve/rebuild. Will looking into that. Again very nicely done!

1abv wrote:And now back to our regularly scheduled program..

Nice pics, this one is my favorite, a great way to spend the long weekend.

WooHoo - 2016 will see the return of the 1500 class in the Hunter Electric Vehicle Festival - perfect racing category for Stealth owners and Fluxers. Held on weekend of 13-14August 2016 at Cameron Park raceway near Newcastle. See details at http://www.hunterevfestival.net/evprize.html and some background on what makes it such a fun event at http://store.quietrush.com.au/blog/what ... kart-track Just ask Hyena if you don't believe me..

Hyena, if I didn't know better, QR put this out as a way for you and him to have a round 2 race.
Top

Hmm. A few of us now have a handful of qs273 motors and sufficient planning time [FACE WITH STUCK-OUT TONGUE AND TIGHTLY-CLOSED EYES]

QR looks pretty damn cool! be great to have something like that in LA or even a meet up….

This was the "Stator Hater" ride….
Before the rebuild I for sure was melting solder on this ride. I think thats 188c? Anyway ran it w statoraid and it was still F-ing evil. Had to stop a few times to keep it under 120. It actually makes riding more interesting having to keep track of not only AH used, watts and volts but temp as well… makes route planning and riding more interesting..
The only logical, and moral thing to do at this point is to get a bigger battery pack and get a better motor.…. you know for safety… 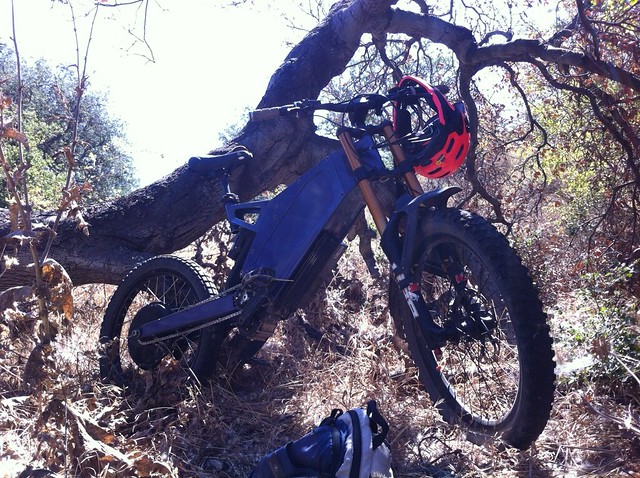 Had to make a field repair to my new sb744... About 7 miles out the green butt connector came off. At first i was like wtf... Over heated? I let it cool... Still jerky power like the phase wires wrong then noticed green connector fell off.

I was able to just compression fit it to get home. Prob good to check your connections.

Not sure if this was a weak cold solder or if the heat fron res melted the solder?
sucka free since 1968
Top

Anyone delt w quigley lately? They promised parts a month ago. And so it goes. Serms they have some craftsmen from 100bc hand smelting filing chiseling these parts :/-/)
sucka free since 1968
Top
Post Reply
17640 posts