Rix wrote:Like the pics, that fire is huge.

Forest fires and earthquakes is one thing that I don't miss from living in Northern California. I had the fire 1/2 mile or 800 meters from the house that i lived in. Thankfully the fire was on the other side of a hill. But the flames shot over the top of the hill towards the small village I was living in and sallowed the trees on the top of the hill. The flames were 4 - 5 times higher than the tallest trees. By the time when we were told by the fire department to grab some things and leave. And the road was so hot that the tarmac had melted. Not Nice. But the house survived unharmed except for some paint blisters on the northern wall.
Top

OK as everyone is probably aware of, the first batch of P7s are built and starting to ship. Here is a pic, can anyone guess which one is mine.

haha - easy! I reckon that will be the nicest looking bike in your whole collection, Rix... just a hint of the army green
Top

@ PRW, you know my style all to well.

I thought you may have changed your color
Top

I thought you may have changed your color

I thought about it, but that just wouldn't be the Rix's way.

Nice wheels Rix and others. I kinda wish I'd ordered one now!

The kick start entry price for these machines were at a point that when I did the math to order and build up a Beta, pay Allex or you for a battery, and purchase the components, it wasn't much of a savings, plus my time into the build, it was a no brainer to get in on this action. And the neat thing is, because the P7 frame is almost identical to the Beta, upgrading components or modding for a more powerful ebike is totally easy and doable. Along with my P7, I also have another Alpha frame on the way. I am probably going to be doing something with big power on that over the next year or so.

Very very similiar, but not identical. The Beta has bolt on side covers, P7 doesn't. The P7 has a tapered head tube, the Beta does not.......yet. The cool thing is, I also have a Beta. Built up similar to the P7. My Beta has Marzocchi forks from back in the day when they were made in Italy, a 24MTB rear on a MAC 10, and a 26TMB wheel up front. The P7 his shod with 27.5 front and rear. The one obvious difference between my Beta and P7 is, the P7 just looks way cooler, and Stealth builds them very clean. My Beta is powered by LIpos, looks like a spaghetti bowl under the covers, and I got the controller mounted with zip ties in the seat triangle. Its a very functional and sano build, but no where near as clean as the P7.
Top

Someone has a new toy......Nice looks good in the green..
Top

Decided to do a little night riding. 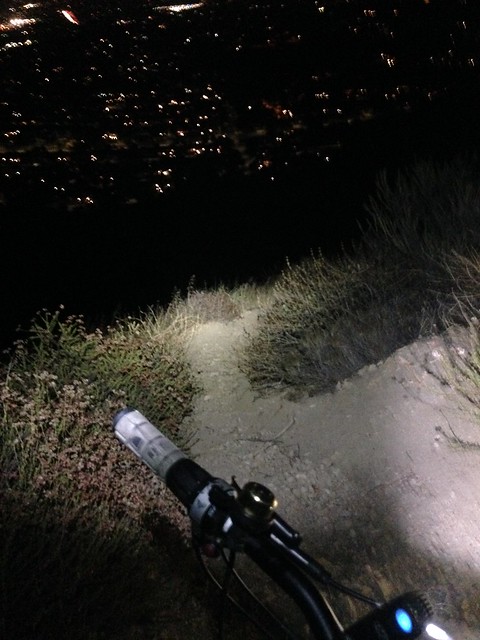 Uhh somehow I remember that trail being a bit wider and not nearly as loose in the day time......WFT was I thinking????.......
Top

Funny how that works
Top 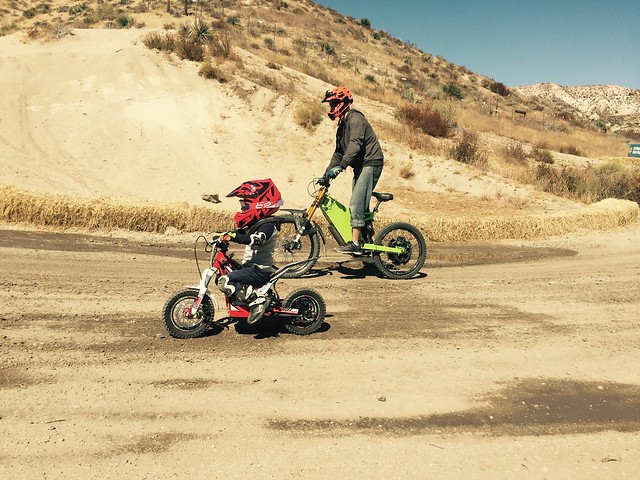 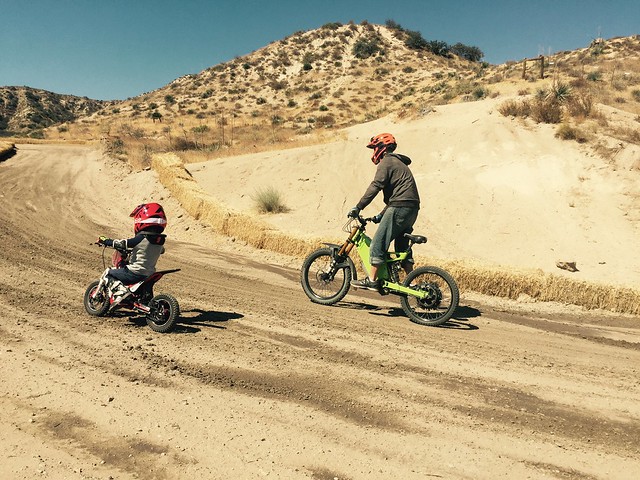 GET EM ADDICTED TO ELECTRIC EARLY!!!!!

I went through the main gate, the track is at a ohv park, he goes to check the "tailpipe" for a sparky... comes back to my window with a very confused look....
Top

I went through the main gate, the track is at a ohv park, he goes to check the "tailpipe" for a sparky... comes back to my window with a very confused look....

Too funny. Nice pics of the little one in action.
Top

Yes, its in, working on it. Will post a pic or two later.
Top

Got the P7 in on Wednesday night, and as usual Stealth did not disappoint. Added a dropper seat post to it, and utilizing Stealth's supplied Dongles, I am running in competition mode with peak power bursts of up to 1100w

Good for about 28MPH, or 31.5mph with some pedal assisting. I really like this bike. It rolls over everything and handles way better than the Fighter and Bomber. I attribute this to the machine being lighter and the small hub motor. The fork is awesome! Its buttery smooth and has both a low speed circuit and a high speed circuit on compression, and standard rebound. Sag is set with PSI. Rear suspension is really good too. Air shock. Overall this bike is sweet. It feels better than my Beta does. Anyway I plan on putting some miles on it over the next couple of weeks. Going to be great. 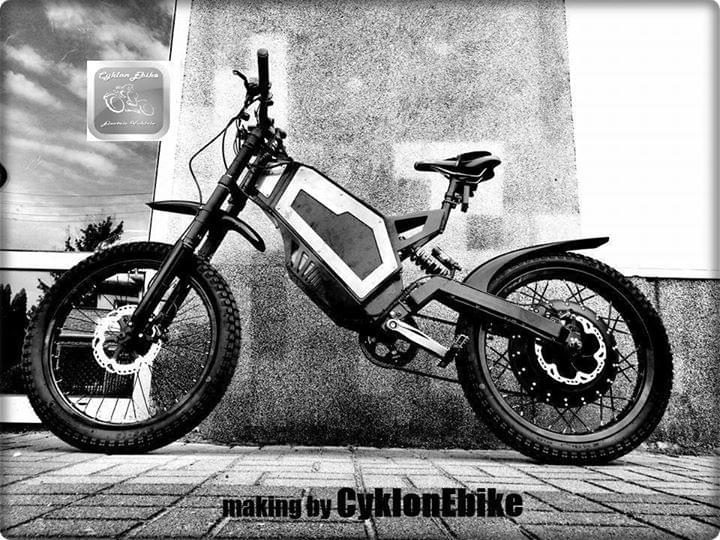 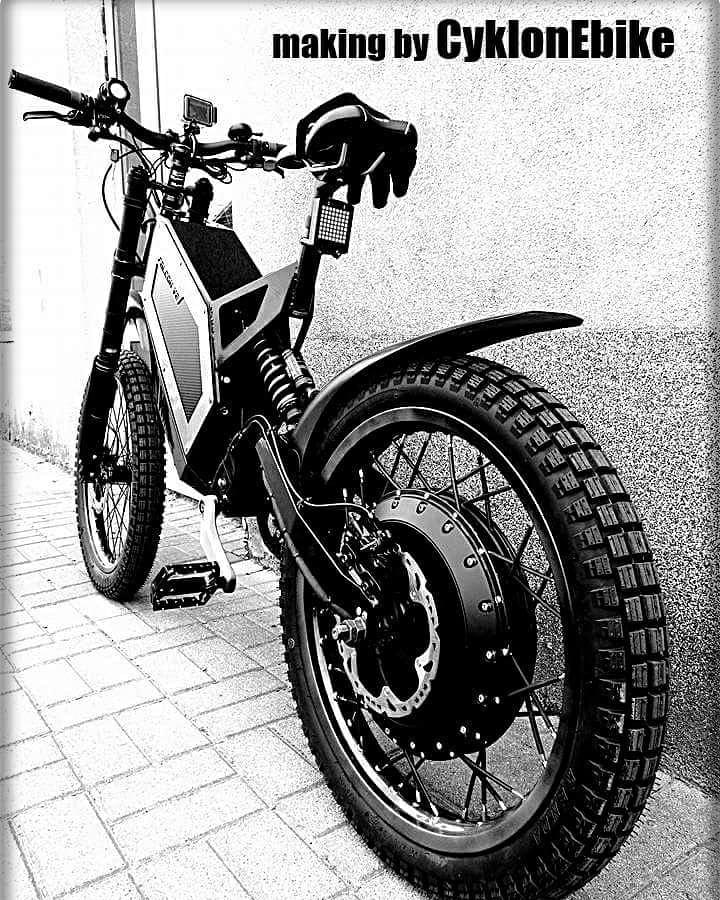 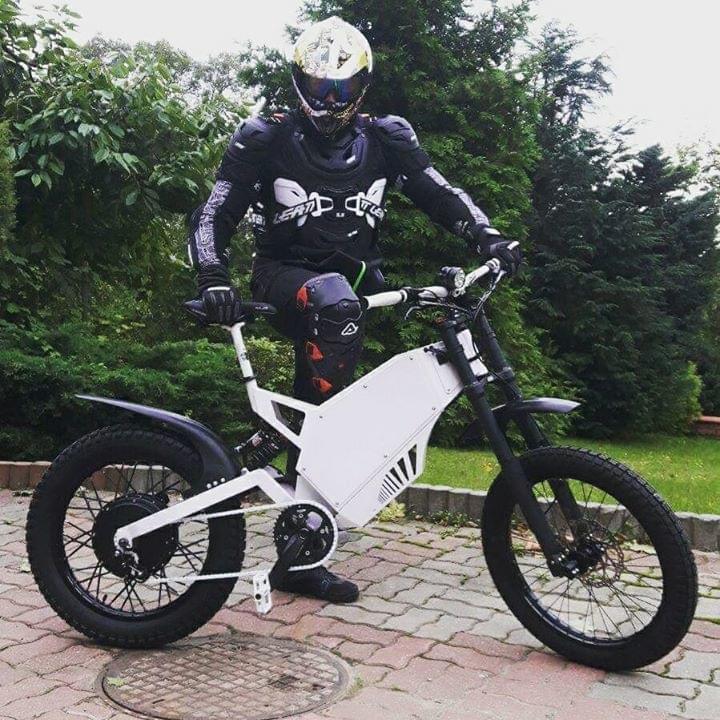 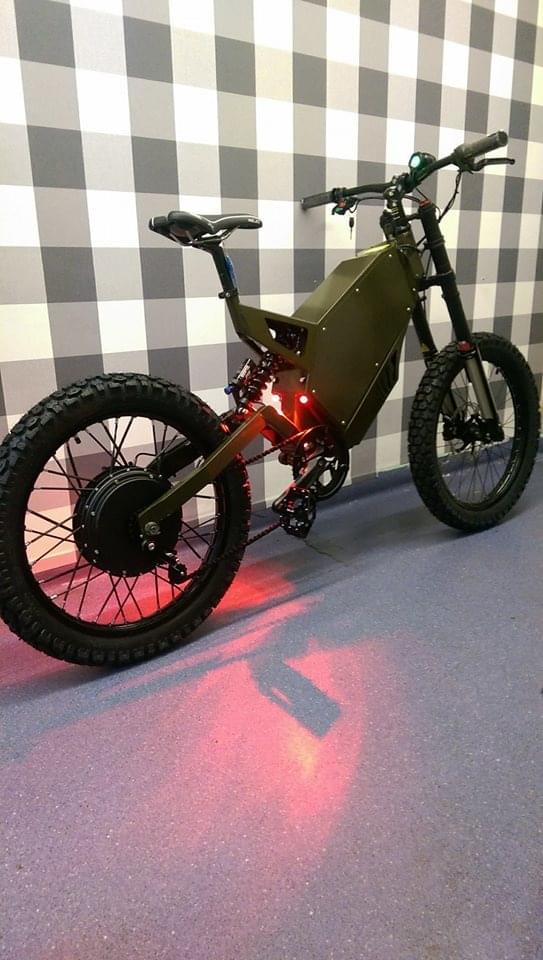 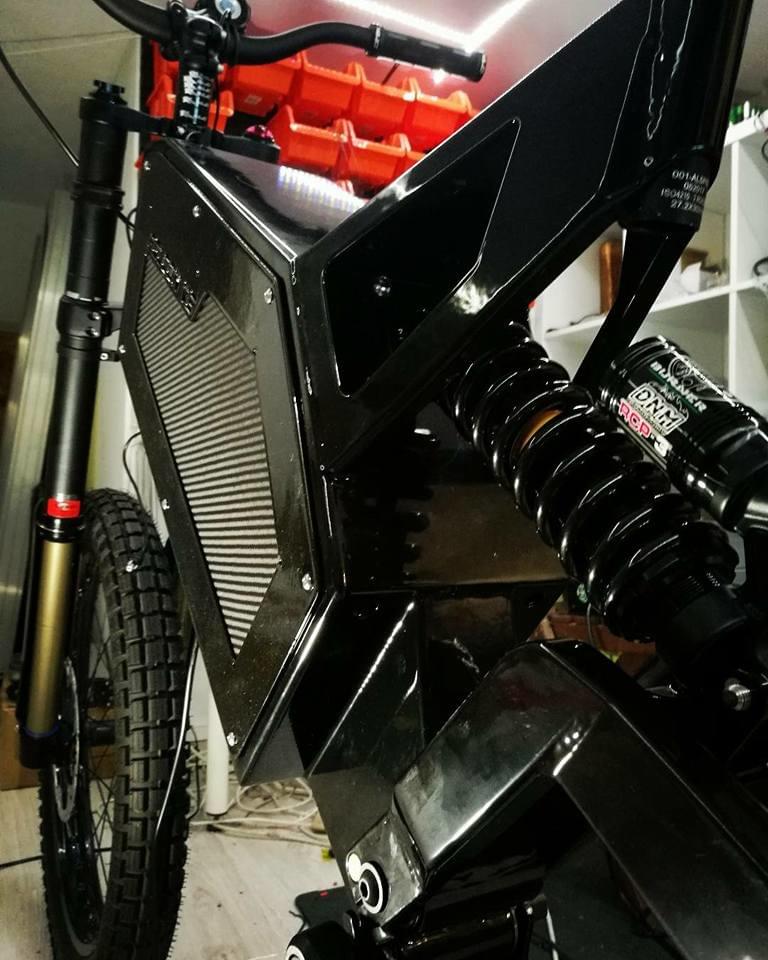 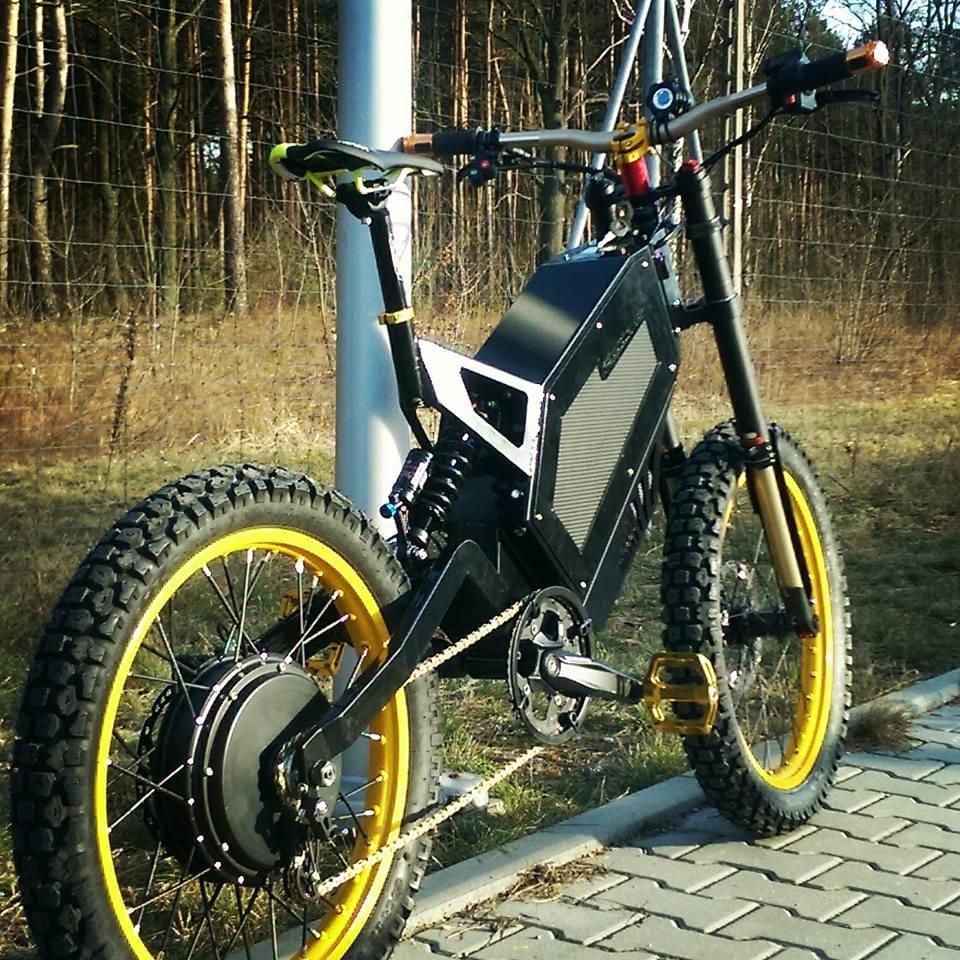 Rix wrote:Got the P7 in on Wednesday night....

After you ride some miles can you give your evaluation of the derailleur? What brand of derailleur? How may speeds? Is the up-down shifting via a twist grip or trigger shifter? How smooth is the shifting and does it jump any speeds going up or down.

Be interested to see how it compares to the derailleur I installed on my Fighter using the hanger Stealth provided with the bike (welded to the swingarm).
LiMn 14S7P Samsung 30Q cell Fighter Battery:http://bit.ly/2iuRvPE
Fighter upgrades in battery and components: http://bit.ly/Kirk-Figher-077
Stealth Fighter #077
Top

Interesting. How much does the one shown in your pictures weight?

I'm also curious on the F and R ground weight to see what the % distribution is?

Mmm seems promising,i think this is the perfect option for a commuter.
So rix whats the cost ?

Whats with the fake stealth invasion

The Stealth P7 is fast becoming my favorite ebike. Yah, it won't win any drag races, but its just so damn fun and comfortable to ride. I did two rides today, First ride was 57 miles and the second ride was 20.3 miles. Total of 4 hours of riding with a 2.5 hour break in between, this bike is awesome.

@ Jim Kirk, the shifting components and cog freewheel are made by a company called "micro shift". I rate the components as good and precise. That may not sound grandioso or like a very good review, but I am a component snob. I am running SRAM XX1 on my Devinci Troy, this is the kind of components that come on 7-8K mountain bikes. It works and works well. I base the functionality of the Microshift components from my experience with SRAM XX1. The only complaint I have with the Microshift is the derailleur doesn't have a lash clutch in it so there is some chain slap on the swingarm. Other than that, it works very very well. Stealth really nailed it with the P7. I see it becoming as popular as the Fighter......maybe more popular.

@Jimboy. I paid $5k for the P7. But that was the kickstarter price. I am not sure what it is now.

@Arek_Arecki, That new Cyklone Ebike looks the business. Like a cross between the Fighter, and FUTR Alpha. It has been said that mimicking is the best form of flattery. This bike proves the point. If Stealth wanted to make a 17kw Bomber, they could do it tomorrow and have it on the market in 4 months. Then someone else would come along with an 18.5kw ebike and claim it has more power than Stealth and is for sale. If I am going to be impressed with an Ebike company, they need to do two things. First, stand behind their high powered product like Stealth does. Others have said they do, but then when the real world happens, they don't support their product as well as Stealth does. I am not going to name call the other companies, but if you search ES, you will find some examples. Second, be as reliable as Stealth. Stealth sets the standard with reliable performing ebikes. I have yet to see any other ebike manufacture do this on the scale that Stealth has. And please, don't think I am bad mouthing the Cyklone, I am not. Like I said above, it looks to be the business. But time will tell how successful it is.
Top

So by the way Rix, What kind of pedal assist (if any) is there on the P7?
Top

scrambler wrote:So by the way Rix, What kind of pedal assist (if any) is there on the P7?

My P7 is equipped with a pedlec sensor however, when I Stealth was building the bikes via kickstarter, they solicited information from the customers about what kind of set up they wanted. I chose throttle only. I have no idea if the next batch of P7s will have this option.
Top

Thanks,
Do you know if the pedal assist will be based on a simple cadence sensor or a torque/ speed combination?
Top
Post Reply
17200 posts