Also consider adding a booster arch to stiffen the brake studs for improved braking response.
This is to express my gratitude to Justin of Grin Technologies for his extraordinary measures to save this forum for the benefit of all.
Top

Thanks Chalo. Yes I've seen and used the Kool Stop pads before, but had forgotten about them, but your are right...they are very good. Thanks for the suggestion. I think I like the last one's the best.
Any thoughts?

If you'd rather not deal with eBay, you can get them at Amazon.com as well with free PRIME shipping: http://www.amazon.com/s/ref=nb_sb_noss? ... Brake+Pads
Top

Ottodog wrote:If you'd rather not deal with eBay, you can get them at Amazon.com as well with free PRIME shipping: http://www.amazon.com/s/ref=nb_sb_noss? ... Brake+Pads

Thanks Ottodog. Just ordered them from Amazon!

I'm in Australia so don't get free shipping, but it was still cheaper for 2 even with shipping.

Ottodog wrote:If you'd rather not deal with eBay, you can get them at Amazon.com as well with free PRIME shipping: http://www.amazon.com/s/ref=nb_sb_noss? ... Brake+Pads

Thanks Ottodog. Just ordered them from Amazon!

I'm in Australia so don't get free shipping, but it was still cheaper for 2 even with shipping.

No problem CD. Glad it worked out for you. I'm always amazed at the sheer volume and variety of stuff they sell on Amazon.

Magura hydraulic rim brakes are said to be very good. Not sure if they would fit the bikeE or be worth the cost.

Alan B wrote:Magura hydraulic rim brakes are said to be very good. Not sure if they would fit the bikeE or be worth the cost.

Let me know which pads you get, I should upgrade mine as well.

I did look at the Magura hydraulic previouly, but have since come to realise they would not help much in my case. My front wheel does not have enough weight on it even when braking to need such a strong brake before it starts locking up and my rear has regen which is very effective when combined with the rim brakes.
The reason I needed new brakes now was because my rear ones have somehow gone completely slick...I don't know how it happened, but one day they were still 'good enough', then the next they became next to useless and I've been forced to use either the front or my feet for the last few kph when stopping as Regen doesn't work that slow. 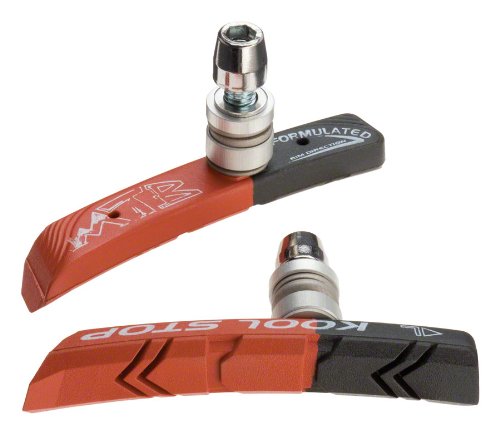 I highly suspect they will be better than my current ones...I think my current pads are the original pads that would have come with the bike over a decade ago!
Cheers
Custom made 18650/21700 battery packs

Will those fit both front and rear bikeE standard brakes? Mine screech badly and undoubtedly could be improved. Especially on the front.

Alan B wrote:Will those fit both front and rear bikeE standard brakes? Mine screech badly and undoubtedly could be improved. Especially on the front.

Is the curvature of the small front wheel going to be a problem?

Good point...I may have just bought myself a spare set for the rear.

Will let ya know.

Alan B wrote:Will those fit both front and rear bikeE standard brakes? Mine screech badly and undoubtedly could be improved. Especially on the front.

Is the curvature of the small front wheel going to be a problem?

Good point...I may have just bought myself a spare set for the rear.

Will let ya know.

I was thinking the same thing.

Those are what I use on the rear.
Build in progress - Bike E AT

Based on the Guru above I went kook stop mountain pads. Great choice. Now I want to look at Magura hydraulic Rim upgrade.
Thanks Justin_le we're here thanks to you. All the best to the mods for their tireless work keeping it on an even keel.
Top

I still haven't got around to mounting the Kool Stop pads, but it looks like they should fit both rear and front rims ok...just not sure about the mounts.

I'm continuing to have axle rotation issues. Last night I tried re-adjusting things for the 5th time in as many weeks, but on today's commute it's made no difference.

Basically, I can hear/feel a small amount of play in the axle when going from acceleration to regen, or vice versa. The torque arms seem to be catching the play, and preventing any catastrophic consequences, however it still loosens my axle nuts over time.

I've now tried locking the axle in full forward (clockwise) position and full backward (anticlockwise) positions. Last nights attempt was to pre-load one torque arm (non-freewheel side) clockwise and the other (freewheel side) anti-clockwise. It seems the amount of torque though it just too much, and any attempts to keep things in place is just eventually overcome every time.

I think I will buy some new nuts as the nylon on my current nylocks seems to have worn out a bit.

Any other suggestions welcome.

I use NordLock washers. One pair each side. Between the torque arm and the nut. I re-tighten them daily after a tire change, but after a few commutes they stop moving.

Good idea, and I've just ordered some nordlocks. The combination of nordlock washer + Nyloc nut can't hurt, and at at this stage I'll try almost anything.

I'd try a regular nut first with the NordLocks.

It does sound like there's too much play in the torque arms, that might need to be fixed. With the nut loose there should be almost no play. What part of the torque arms is allowing this motion? Can that be improved?
-- Alan [w6akb]: CroBorg SuperCommuter, RidgeRunner, Bonanza2WD, EbikeE, AlansEbikeSite
Top

Alan B wrote:I'd try a regular nut first with the NordLocks.

What makes you say that? Wouldn't the combo help each other?


Alan B wrote:It does sound like there's too much play in the torque arms, that might need to be fixed. With the nut loose there should be almost no play. What part of the torque arms is allowing this motion? Can that be improved?

It's quite hard to see as it takes some force to make it move...i.e. I can't normally get it to happen with the bike flipped over and the wheel freewheeling...so it's hard to know exactly what's moving. I 'think' it's the axle rotating slightly inside the rectangular flats of the torque arm block. This would make sense as the nuts loosen over time.
I don't really see how that can be improved without some tighter tolerance torque arms though. The V2 torque arms I'm using are the perfect fit as they can use the eyelets in the rear dropouts nicely...it's just a shame they aren't tighter around the axle flats.

The NordLock washers bite into the nut to hold it in place, not sure the nylock feature is going to help that. I'd try it both ways to see.

The best torque arms come too small and have to be filed slightly for a perfect fit, or they clamp solidly onto the flats with a flexure and clamping bolt.
-- Alan [w6akb]: CroBorg SuperCommuter, RidgeRunner, Bonanza2WD, EbikeE, AlansEbikeSite
Top

Brakes fit! Front and back!

Good fit. How do they work?

Alan B wrote:How do they work?

Just tested.
The front is great. Easily locked it up.
The rear is better, but still not able to easily lock up without squeezing the brakes quite hard. I may be able to help that by tightening up the cable somewhat. I loosened it right off when changing over the pads, so there is probably a bit of room to play before they start rubbing.

Overall, an upgrade well worth it IMO.

I may soon be finished my Solar setup also...I put some time into soldering up connectors, diodes and the DCDC converter recently. The hard part will be getting the wiring through the already cramped frame.

My Solar setup is done at last!
The setup is as previously posted in multiple places in this thread, but to summarise it's:
-18W - 20.5% efficient 12V panel
-CC-CV - 5A capable DCDC converter
-2x Schottky Diodes
-Cheap '150A' Watt meter
Plus a bunch of JST 2.5mm connectors and 20AWG silicone wire.

I did a little testing today and it seems really solidly mounted. Doesn't move at all. Today was a really windy day and if ever the panel would cause problems with cross-winds etc, it would have shown up today. The position above is the second attempt. The first time, it was too low and the tops of my feet would catch the panel as I pedalled. That was fixed by moving it up as high as possible. The very top of the panel is a little obscured and I had to trim off the very top corners of the panel (but not the solar cells themselves) so my hands would still fit, but I don't mind if it makes it practical and usable.
The watt meter is only temporary. I will monitor how it goes and best sun tracking positions where I park it at work, then remove it as it doesn't look great, chews up a small amount of power and just isn't necessary normally.
The only other change I'm considering is trimming off the white edges. They don't seem necessary and I think the panel would look cool without the white bezel.

It bounces up and down when I hit bumps...adding a bit of reflector dazzle so I'm seen even better by cars.

Quick update on how this went today...
It seems my cruising watts has decreased by 50-100W. It's hard to quantify, but that's what I'm seeing...I guess the wind resistance really does add up.

Today was quite cloudy so I don't think it charged much. When I checked on it in my lunch break I saw the watt meter voltage drop as a cloud blocked the sun meaning it stopped charging. It seems to need mostly unhindered sun to charge at all.
I had to ride further than I have been and used a total of 13.05Ah today. Cells were down around 3.5V.
Prior to today I was hitting 3.5V per cell at around 12-12.5Ah, so it would seem the Solar managed maybe 15-25WH if I also factor in the reduced power consumption I now have at cruising speed.

This solar setup is turning out to be a double whammy for adding range.

Tomorrow is forecast to be sunny, so hopefully a better charging result.