Short wheelbase recumbents are totally awesome machines. Fun to ride, conversation starter, head turner, super comfortable, maneuverable, ridiculous aerodynamic efficiency, etc. You get the point. I scored one and I've been having lots of fun riding it around in regular bicycle mode.

The bbshd is on the way, so no pics yet. I also want to swap out the euromesh seat for the recurve 3, and probably put a 20~24" front wheel with front suspension as well. I've sort of gotten used to avoiding the awful front wheel-to-heel strike in tight corners, but I want it gone completely. That could totally mess me up one day, and I'm not having it. I also will be using a 55T chainring with an 11-36T 9sp, Avid BB7 203/180mm front/rear brakes, and maybe a 29er rear mtb wheel with a 700x38 tire.

Looking at the amazingly low power requirements for this type of recumbent on http://kreuzotter.de/english/espeed.htm, a mid-sized battery (useable 900wh for the 14s7p 35E) can take me a long ways, even while cruising at 30mph (70 mi @ 30mph). I was planning on an additional 14s7p rectangle pack in parallel (from em3ev) , but it's not in the budget right now. Later will be fine. I plan on carrying a 14s 11a charger with me for some volt boosting on a 140 mile extended day ebike adventure. I also have to figure something out with keeping my feet on the pedals. Maybe I'll toss on some M-324's so I have options. I don't like death trap toe cages.

I'm sitting on a collection of ebikes that I need to start selling. I'm still waiting on the X1 pro, which is what I really want on this thing, with a 20s10p 35E pack. But, the bbshd kit will do for now, and it can easily go on any other bike when the time comes.
There are two types of people in this world.

All right, finally got the parts, installed them, and been having a blast riding this thing. It can reach 30mph on PAS 5 (on a 0-9 scale) , and 40 mph on lvl 9. That's fully maxed out power, gearing (55/11T), and cadence. Bumps are a major weakness, and so are other qualities of the seat. I need the recurve seat, with a separate saddle and back rest. Other than that, I did a 60 mile ride with lots of speeding around, and ended up at 3.7v resting (on the 14s7p of 35E cells). 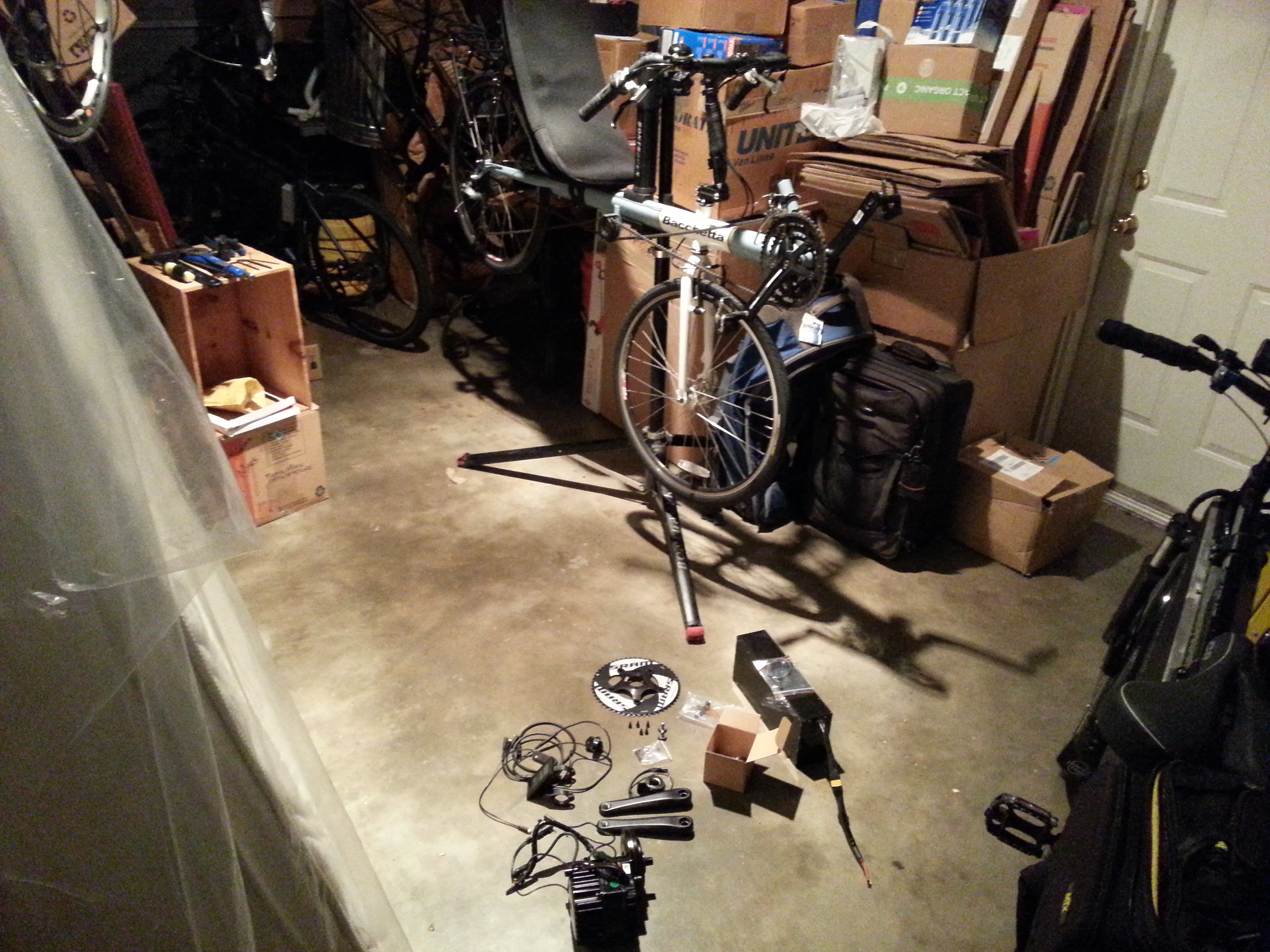 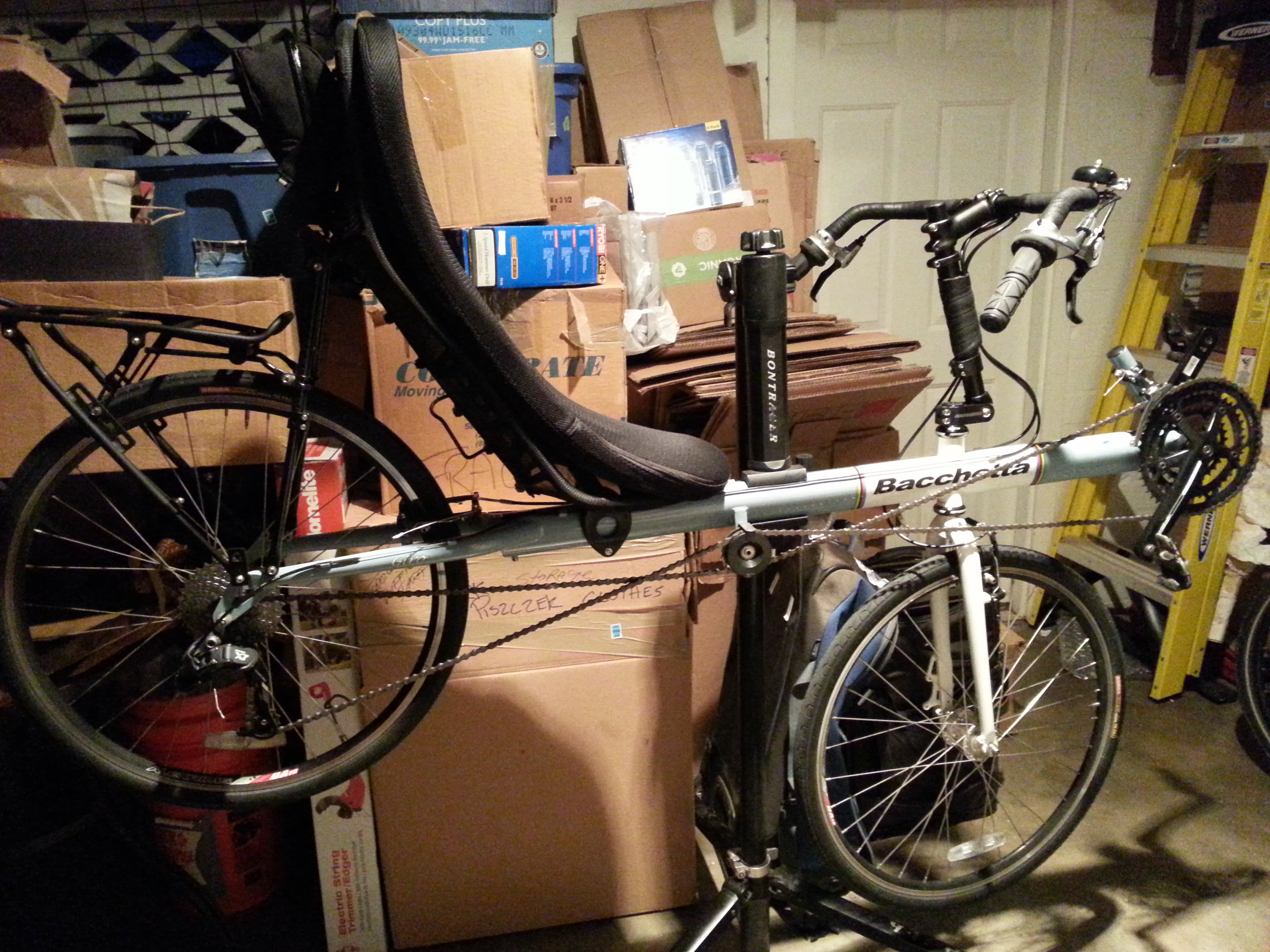 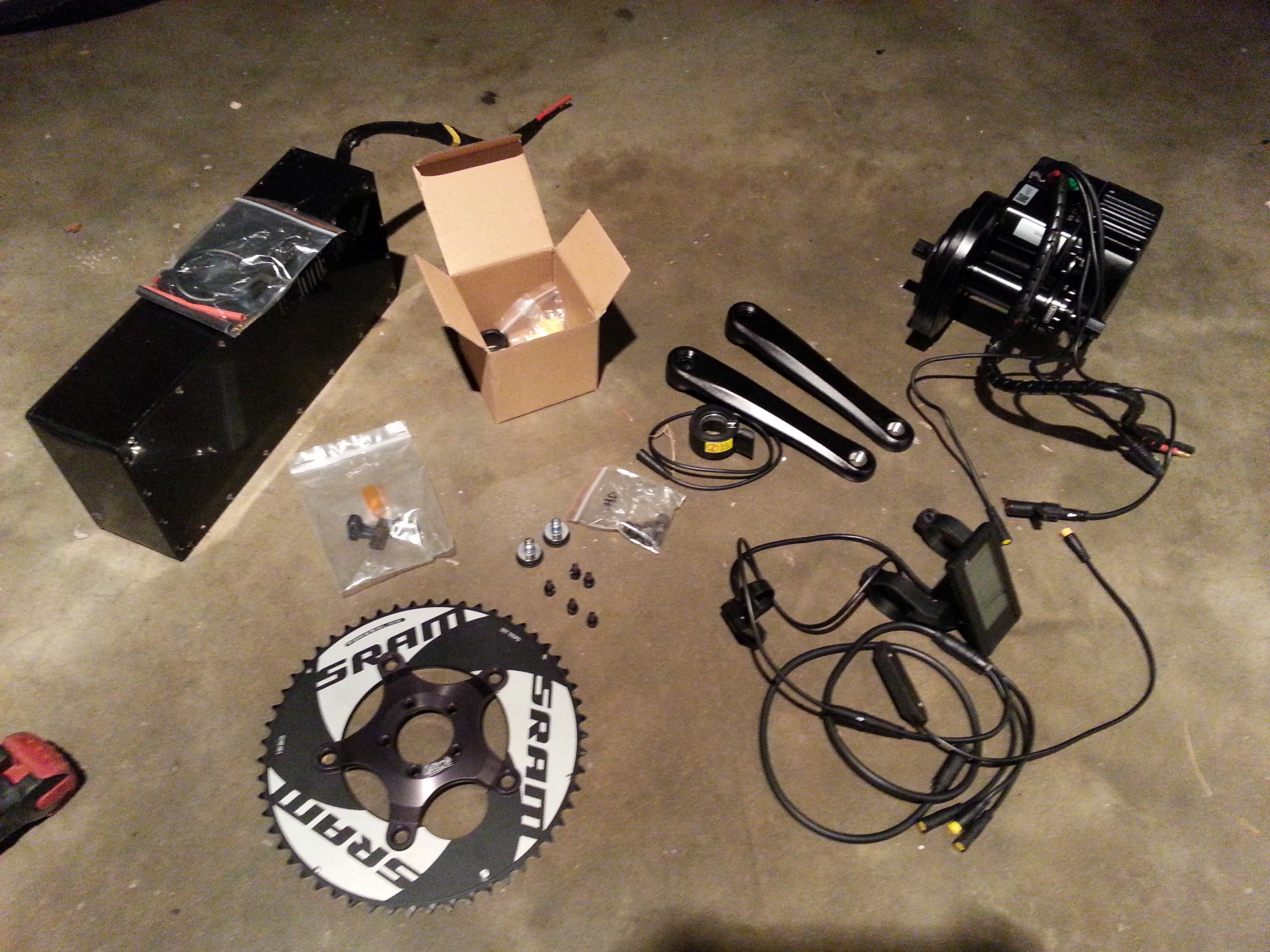 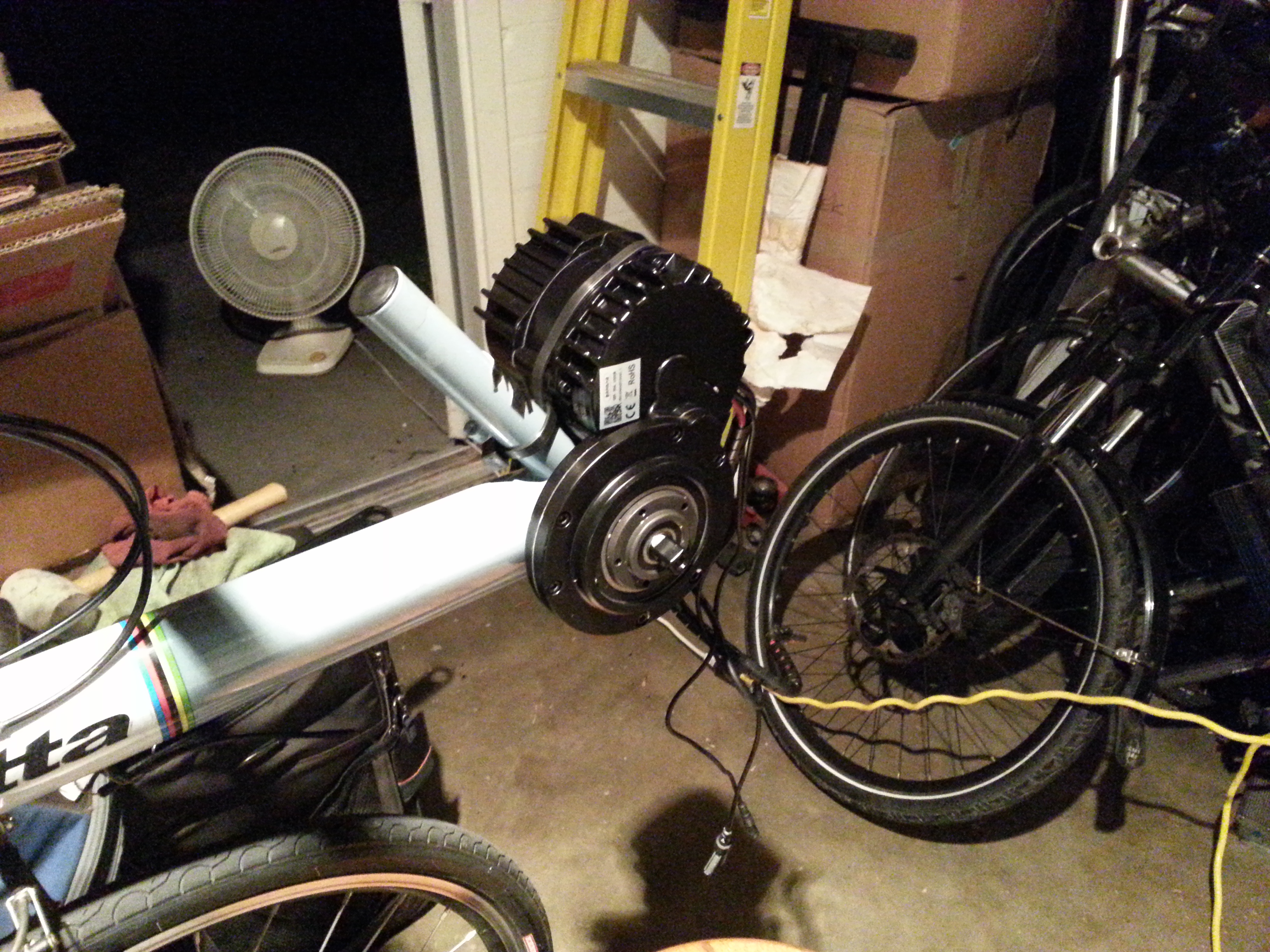 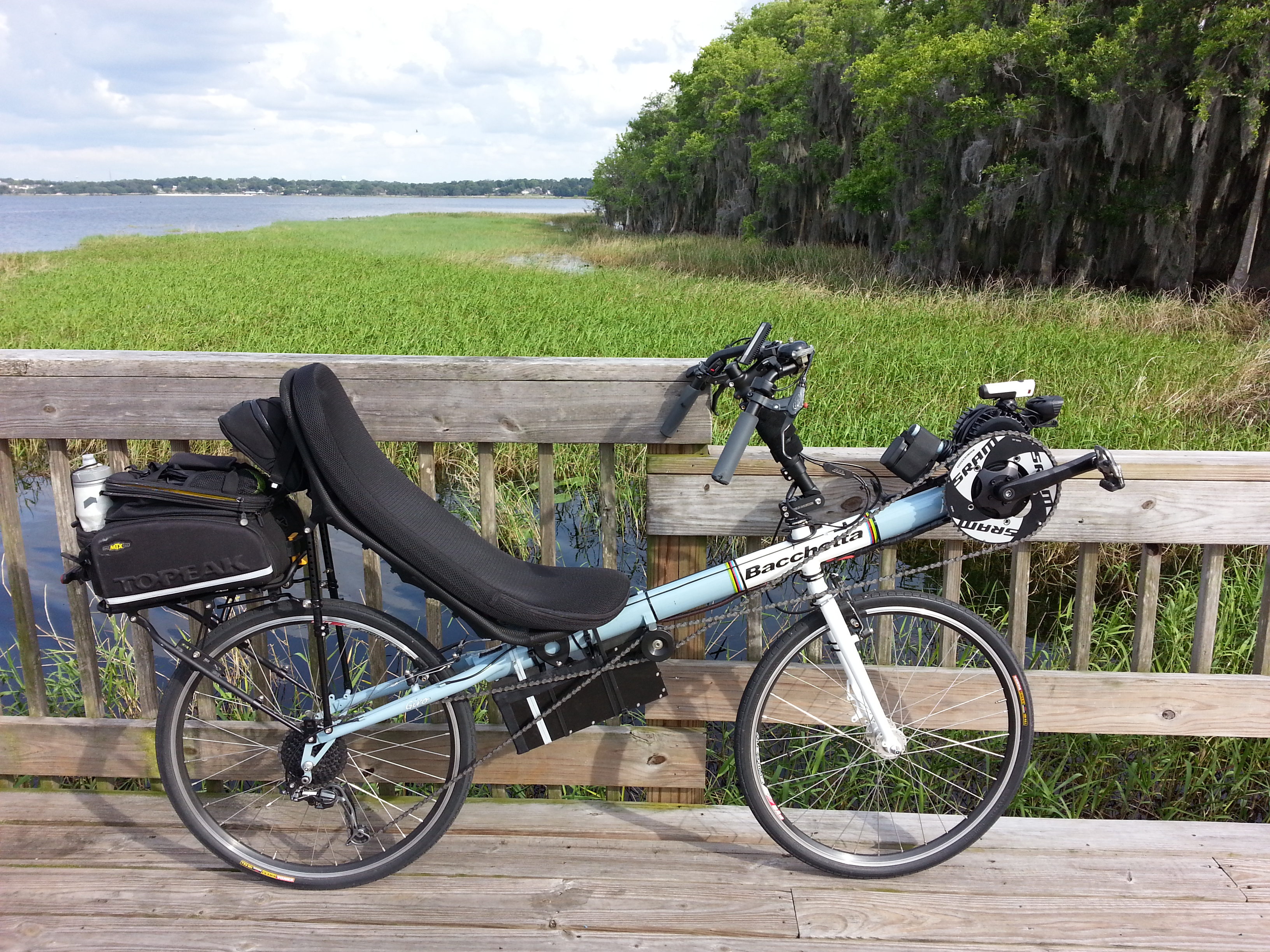 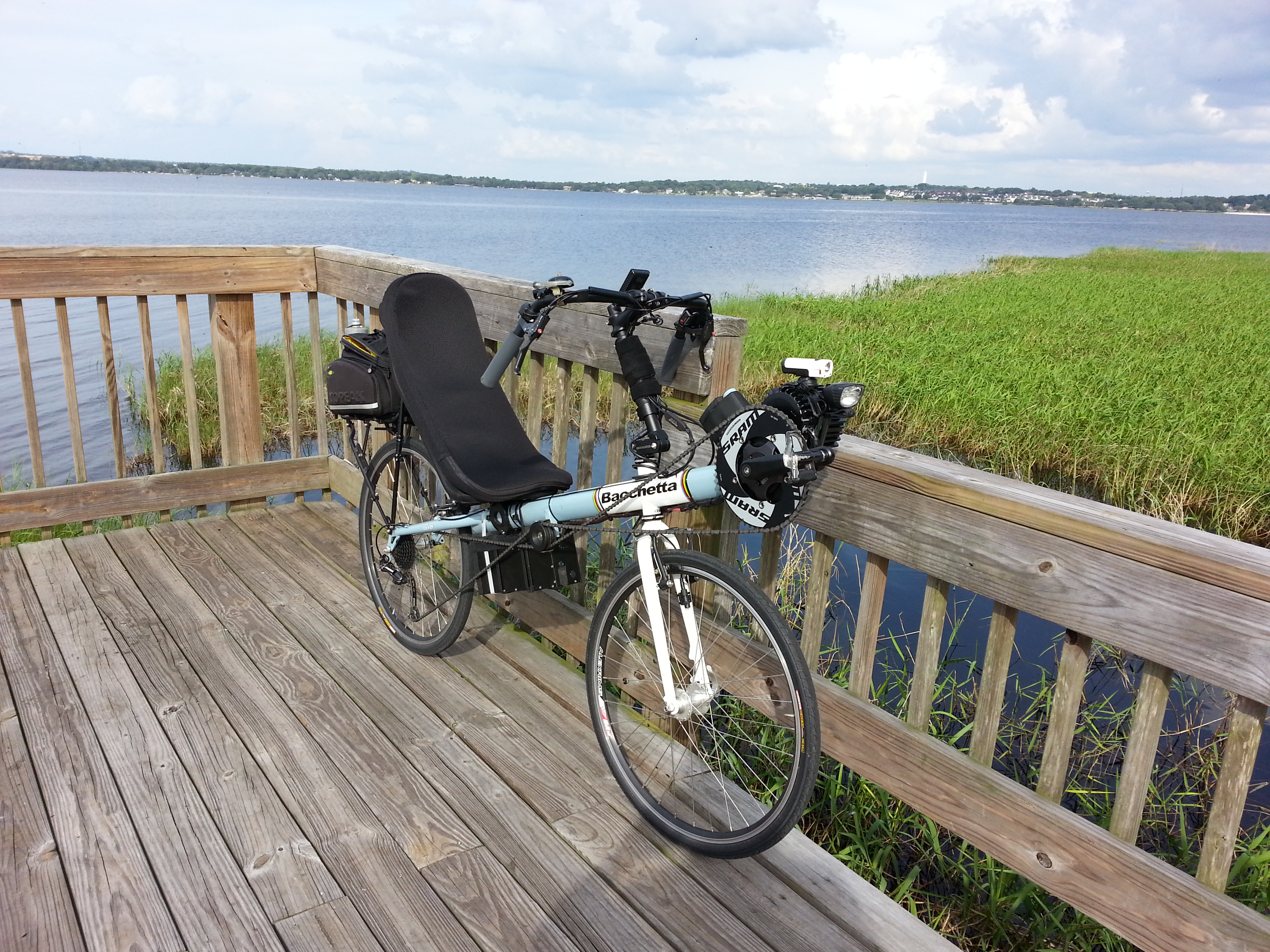 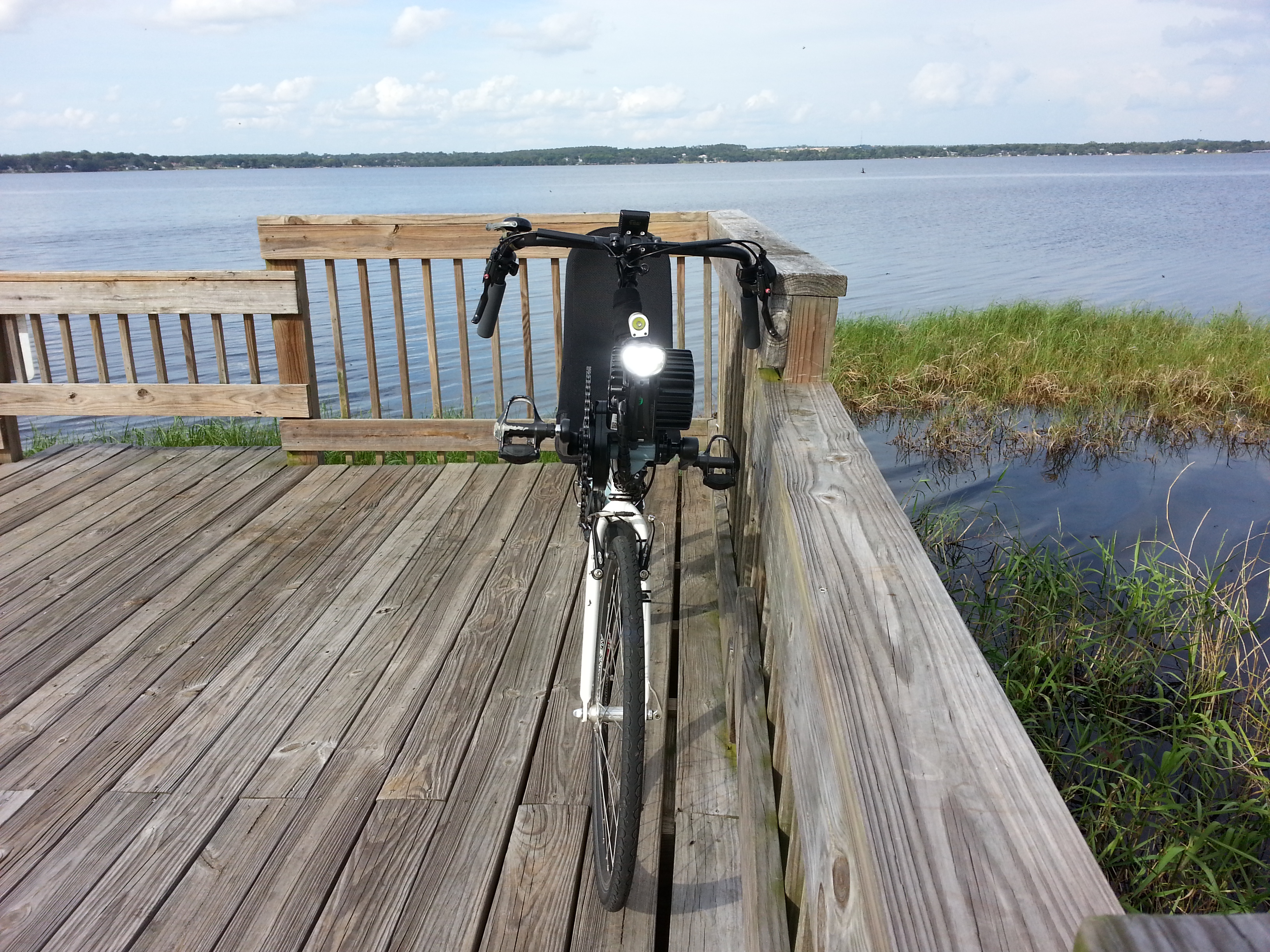 There are two types of people in this world.

Looks like a nice ride. You like speed more than I do, and you did a great job getting that bike set up for what you wanted.

Before his stroke a decade ago my brother had a Burley SWB with rear suspension. He was planning a cross country ride, but was looking for a SWB recumbent without suspension for that trip. He wasn't into electric assist, but tolerated me on my LWB recumbent with a front hub motor. I gave that bike up almost a decade ago for balance issues, whereas he could come to a full stop at a street crossing, balance until it was clear, and take off without putting a foot down.

At 79 I enjoy both my tadpole and delta recumbents, both with BBS02s, but at 20 mph or less. Enjoy.
-Rassy-

Welcome to the best kept secret on the planet...electric assist high racers. Made for each other like peanut butter and jelly.

I have one of those recumbents and have thought about putting either my 02 or HD on it.
It would be fun and efficient. A little throttle from a dead stop would help the initial wobble

Cool ride. Being able to hit 40mph, with your gearing being the limit, on a BBSHD is pretty rad. But maybe a bit excessive considering the capabilities of the frame itself, no?
"Love and compassion are necessities, not luxuries. Without them, humanity cannot survive." - Dalai Lama

It has a pretty stout steel frame, with decent dropouts. As long as it's a smooth straightaway, it's very stable at 40. The stability is worse at lower speeds anyways. Right around 30 is where you feel the flying sensation. You can carve some tight corners at 30mph, but better be no bumps.

I also had to get rid of the 26 x 1.25 tires at 90 psi, which work great at human power speeds. A 26 x 1.8 at 60 psi made all the difference. All things considered, this is the most advanced user bike ever. It has a vary sharp learning curve, especially if your electric and clipped in. It requires a bit of manhandling over 30mph, and I'm exhausted in 60 miles. I don't think I can do the 136 mile super adventure on this thing.

Even though I put the BBSHD on another bike, it was the best matching drive for this platform. I just wanted a little more power on it, like 2000w at 40a for acceleration only. I pedal 80-120 rpm the whole time I ride, and with low aero resistance, I think it would last for a bit. I may end up looking into Alan Chinito Hu's adaptation for a FOC controller upgrade, and put it back on.
There are two types of people in this world.

hypertoric_amplituhedron wrote: ↑
Aug 12 2019 5:21pm
I also had to get rid of the 26 x 1.25 tires at 90 psi, which work great at human power speeds. A 26 x 1.8 at 60 psi made all the difference. All things considered, this is the most advanced user bike ever. It has a vary sharp learning curve, especially if your electric and clipped in. It requires a bit of manhandling over 30mph, and I'm exhausted in 60 miles. I don't think I can do the 136 mile super adventure on this thing.

I've only put in maybe 2 miles into riding a SWB and that's exactly what i thought about the bike. That it's capable of fantastic speeds on pedal power or even a tiny geared motor, but you better be alert about what's going on because a lot of things could go wrong.

The highracer SWB made me feel like i had very little control over what's going on, yet it puts you in an even more relaxing position than my CLWB, so it's even more of a paradox. Maybe it's something you get used to and learn to live with because the aero benefit is huge.

There's an interesting middle ground between the two options... the HP Velotechnik Spirit. The seat's back a couple degrees and the bottom bracket is higher than most CLWB's, but you couldn't exactly call it a SWB, could you?

Lol, it's definitely a funky looking cross over, but looks very ergo. Another thing I noticed is arm position. You'd think you want the handlebars close, but you really need lots of arm extension. The highracer puts your back and neck in a super relaxed position, but your legs and arms are held up and stay super active the whole time. And, after falling over once on each side clipped in (only happened at very slow u-turns), I've learned to just clip out and not risk it. And, then there's the one leg clipped in up high, one leg down low as your unstable kickstand at red lights. That's a whole other endurance feat alone, lol. Longest 3 minutes ever.
There are two types of people in this world.

1. Those who can extrapolate from missing information.
Top
Post Reply
9 posts • Page 1 of 1