@ Allex you have great ideas as always

I'm going to make a spare set of electrodes and I think I'll follow your suggestion to try a smaller copper rod.
By the way are the electrodes holders made of brass?

and found some nice 4AWG silicone wire on alixpress that seems cheaper that the one linked some post above: https://it.aliexpress.com/item/1metre-4 ... 0.0.ntw2kl
Top

Quick question. Is it ok to to use the jp welder with a fully charged pb car battery? which is 14.4v

And, how many cranking amps are needed for 0.2mm welding?

K, thanks for the confirmation. My welder is in the post

Here are some pics of my welder cables and how they are slowly breaking. This is why I don't recommend this type of cable and make sure you get the ultra flex. Stiff cables suck to weld with.

I also recommend having the cables at least 2 feet longer. Oshara said that by adding a couple of diodes in certain locations you can make the cables way longer. I'm not sure the physcis behind it but I would get the cables longer and more flexible if you want to weld packs easier.

Your cables will break just like mine if you get the same stiff cables, and you will then have to replace it down the road like I have to, so why get the same cable?

Just trying to offer you advice based on my experience welding a large 280 cell pack. JP spot welder is good, but the cables can be better, just spend the extra $10 or $20 or whatever for better cables, trust me. 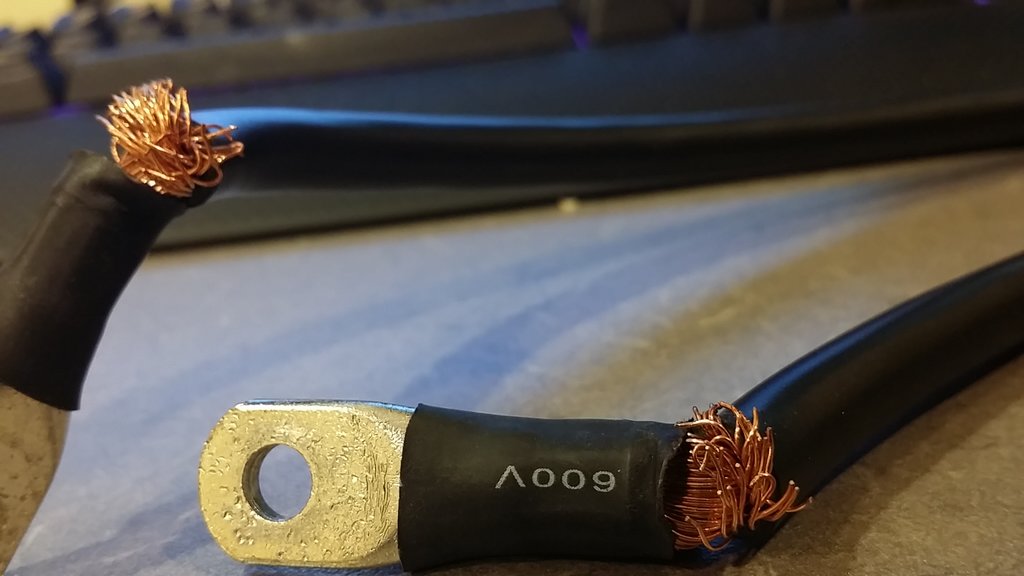 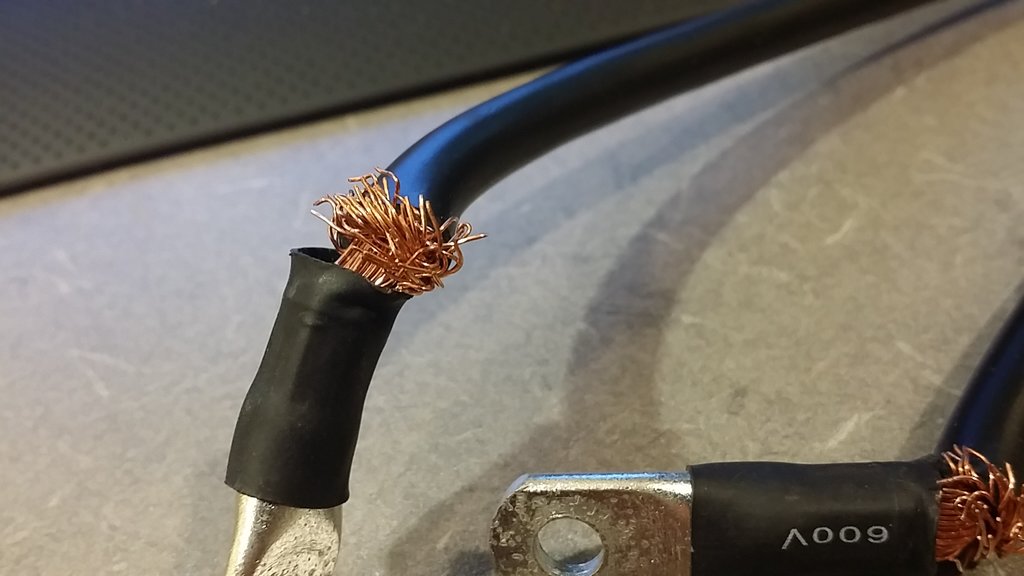 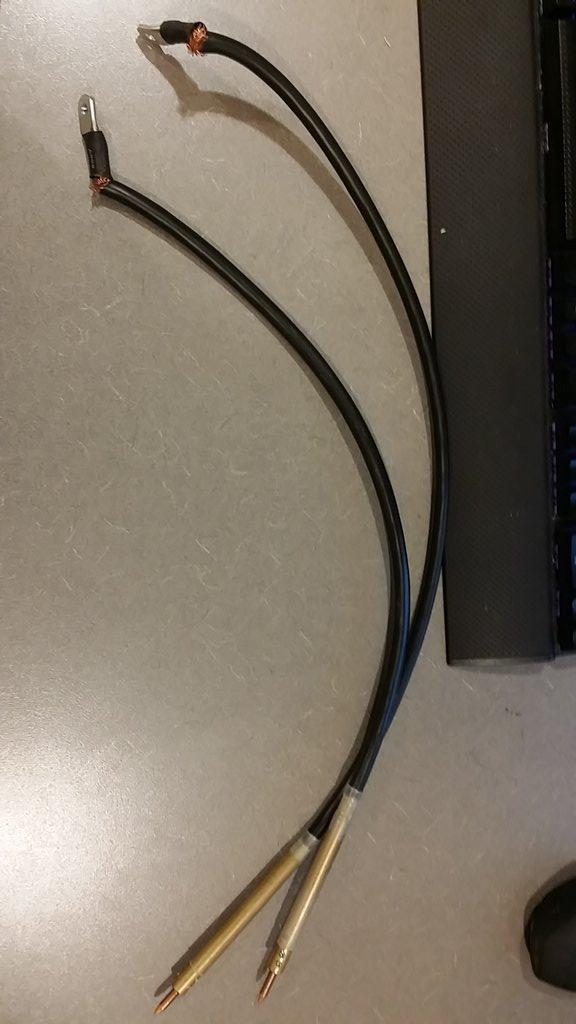 That's interesting, I have welded much more than 280 cell with mine, and haven't come anywhere near that. Maybe you should just raise the welding battery so the cable exits terminals in straight angle.

I have no problems building electrodes with better (maybe even a bit longer) cable for custom order, but for now I don't see the point of making that a standard since your example is the first one like this.

So I hope that you understand my side of the story

And thank you for sharing your experience, if anybody else has something similar I would be glad to hear it.
My electric moped: http://www.evalbum.com/4966

If someone reading this already has cables just like that, I would recommend adding coil-springs as a
"bending relief" / "anti kink" feature, much like those seen on garden hoses.

riba2233 wrote:That's interesting, I have welded much more than 280 cell with mine, and haven't come anywhere near that. Maybe you should just raise the welding battery so the cable exits terminals in straight angle.

I have no problems building electrodes with better (maybe even a bit longer) cable for a custom order, but for now I don't see the point of making that a standard since your example is the first one like this.

So I hope that you understand my side of the story

And thank you for sharing your experience, if anybody else has something similar I would be glad to hear it.

Riba, yes I could have strained the cables much more than normal. When I built my pack I had to make a weld then move the cables away after each cell because of using tabs that only attached to two cells which also had a soldered wire on it. This definitely put a lot more strain on the cables.

, as I was constantly moving them out of the way after each single cell weld.

But that being said, It really doesn't take much more money to get flexible longer cables, so if people are looking to have some luxury, I highly recommend just paying the extra upgrade cost for longer flexible cables if you are offering it. But the standard cables will work if you need to save money and don't plan on building lots of packs.

Oshara I believe said by putting a diode between the welder and negative cable, or something like that, you could make the cables a lot longer and that is what he has done. These were in past posts, as he had pictures of using really long welding cables. I wouldn't worry about them being a couple of feet longer, but use the diode.
Top


They come with the heat shrink, don't worry

Maybe I could use that special heat shrink with "glue" on the inside, it's much stronger.
My electric moped: http://www.evalbum.com/4966


They come with the heat shrink, don't worry

Maybe I could use that special heat shrink with "glue" on the inside, it's much stronger.


Dont bother =) What you can do is to explain to people how to correctly connect the cables to the battery. The cables need to face upward when coming from the Lead Acid battery. This way they will basically always be at your hands, and you will releave maximum stress of them. just experiment to find the best angle.
So for the right electrode you can do the following:

Thank you for the great post Allex! That's very clever and useful.

I would also like to propose another way, with raising the welding battery: 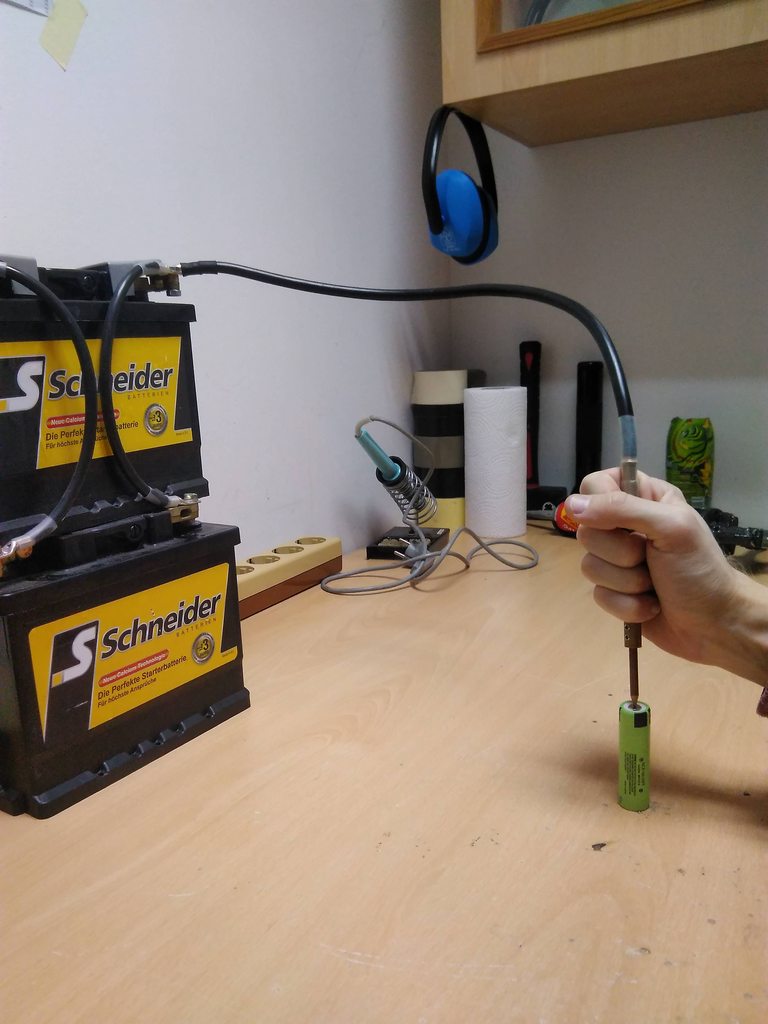 Of course, you don't have to use another battery like I did, you can use a slab of wood or something similar, just make sure it's sturdy because batteries are heavy.

I was thinking of something similar. Make a strong movable shelf that is tall enough to allow the pack to slide under the battery so the welding work area is always close to the battery, just slide the pack under the battery as you work. A piece of 3/4" plywood and a couple of 2x4's or 2x6's would work for this.
-- Alan [w6akb]: CroBorg SuperCommuter, RidgeRunner, Bonanza2WD, EbikeE, AlansEbikeSite
Top

Also, if anyone wants to order assembled welder, now you can do it, because they are back in stock and available for order!

Thanks to Jakov for making these available once again.
I missed out the first time, but had the pleasure of borrowing one from a fellow ES member to build my recumbent's very long battery pack.
Now I have ordered one which is on the way to me from Croatia currently.
I'll be using it to make a 14S14P 2.5KWh pack for my Stealth Fighter.

I don't have an old SLA battery, and would like to avoid buying one if I can help it.

So I am replacing the entire battery pack out of my gen 2 2004 Prius soon, and I was wondering if it would be a good idea to use some of the old cells with this welder.
Each cell block in the Prius is 7.2V (nominal) NiMh, so I would probably make a 2S6P or 2S8P battery from good cells. They can reportedly put out 100A cont each when new, so I think 6P should be enough, but given the age and ~290000km's they've done 8P or maybe even 10P would be best. The whole battery consists of 28 modules, so I have a few spare to play with.

Another option is to wire a number of the NiMh blocks in 2S, then in parallel with the Prius old SLA battery which is only 350CCA from memory, but it would probably just be easier (and safer) to buy a new SLA instead of doing that.
So I guess underlying question I have is, can any battery be too powerful for this welder?
And second to that, does NiMh work ok with this kind of welder?

Yes, it can be too much, you should be careful

I don't have any experience with those cells, but I would start with smaller pack and see how it works. It's enough once it welds 0.15 mm strip with 5-10 ms pulse. But I'm sure you could get your hands on maybe used car starter battery (not SLA, simple starter battery) and then you're safe, around 70 Ah is nice value.
My electric moped: http://www.evalbum.com/4966

Thanks Jakov.
Adding the cell blocks incrementally and testing sounds like it would work best then.
I believe each cell block is about 6.5AH, so I would need at least 10P to get close to 70AH. That might make it impracticable to use these cells then as it would take up half my table just for the battery.

What I don't understand is why does the AH matter? Isn't it just the peak amps discharge that matters?
When I used the welder last time, I used a small 500CCA SLA, but I left it on the charger while welding.
If I did the same with the Prius NiMh battery, and it can deliver 500+CCA (which it should be able to with just 5 or 6 parallel cells), I don't see why I would need 70AH capacity?

The Prius battery might work fine with just 1p. It would be interesting to try. Small Lipo batteries seem to work well, so this might be similar. Depends on the internal resistance.
"One test is worth a thousand opinions"
Top

Yeah I meant 70 Ah only for starter batteries, for lithium battery it's completely different story, lipo is ok from 5-15 Ah etc. Internal resistance is what matters.

So yeah, you can start with 1p (around 7 V should be fine, don't go over 10 V), Prius battery should have low internal resistance.
My electric moped: http://www.evalbum.com/4966

riba2233 wrote:So yeah, you can start with 1p (around 7 V should be fine, don't go over 10 V), Prius battery should have low internal resistance.

I was planning on using two cell blocks in series for 15-16V as this is similar to SLA at full charge. Is this a bad idea?

What is the max voltage you would recommend?

I just received the JP spot welder, i can't wait to test it but,

Can i use those cells to create a pack that would work well with the welder? i was thinking of a 3s configuration, knowing i have a bit more than 300 of thoses cells : https://industrial.panasonic.com/cdbs/w ... 0CE285.pdf

If someone can explain me how to calculate the number of cells i need to achieve the same internal resistance than a 800CCA lead battery, i would be great

Many thanks in advance
Top

I had some lipos that I though I would test but it was a no go.

bad news for me, but i could go up to 3s100p, i will make that pack anyway, i just wanted to be sure that i won't smoke the jp welder at the first weld