It's coming! After some time well spent pestering poor Ivy at Frey, they've given in and the OK has been given to announce the upcoming Frey HT1000!

So far the only two details known are that this bike will feature the Bafang G510 mid mount motor, and a selection of top shelf components. You can probably expect a choice of Magura or Tektro 4 piston brakes, Rockshox suspension forks, and the Reention Dorado battery pack.

I can't say when it'll arrive, because I don't know, but I think it'll be fairly soon 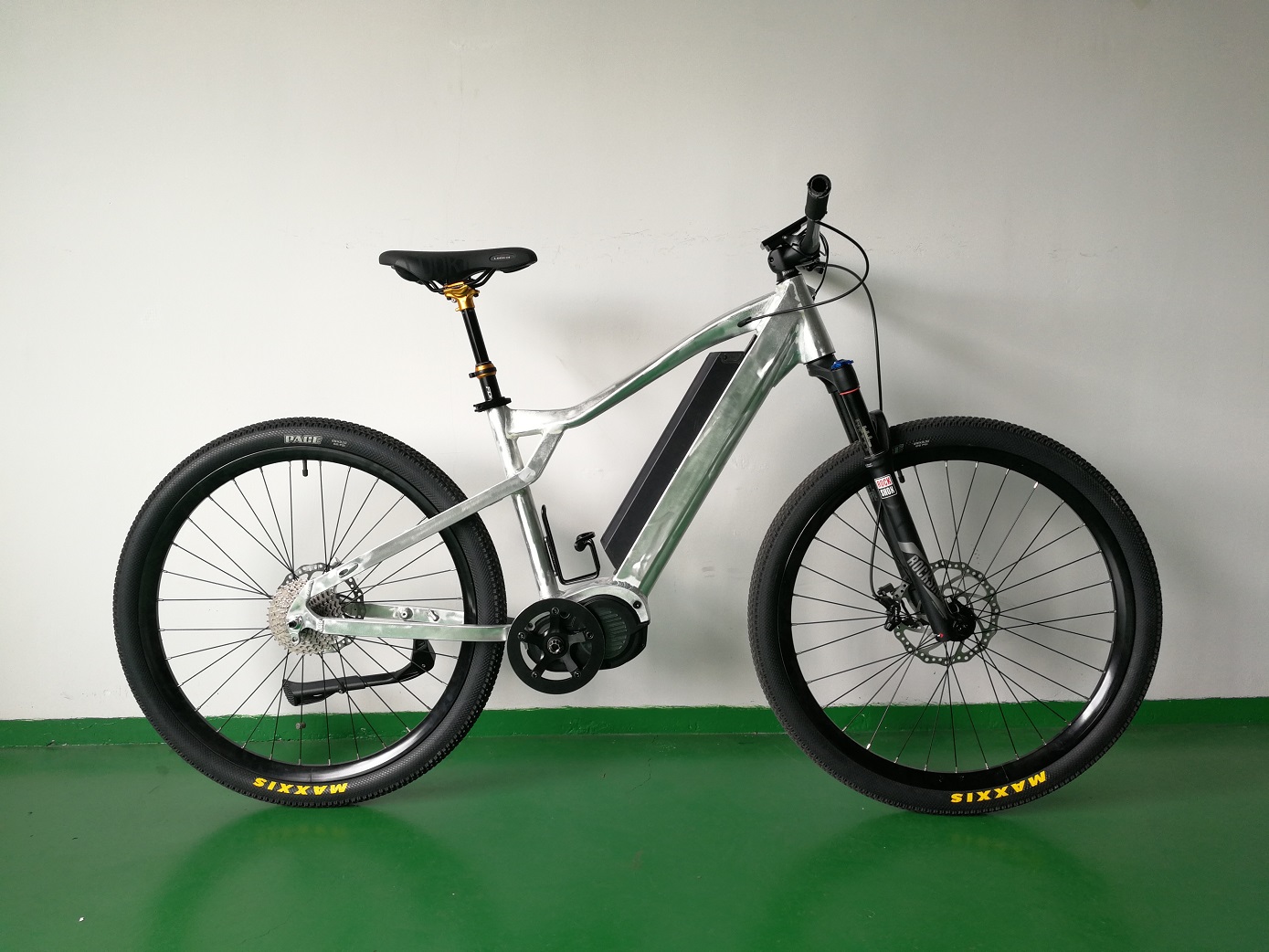 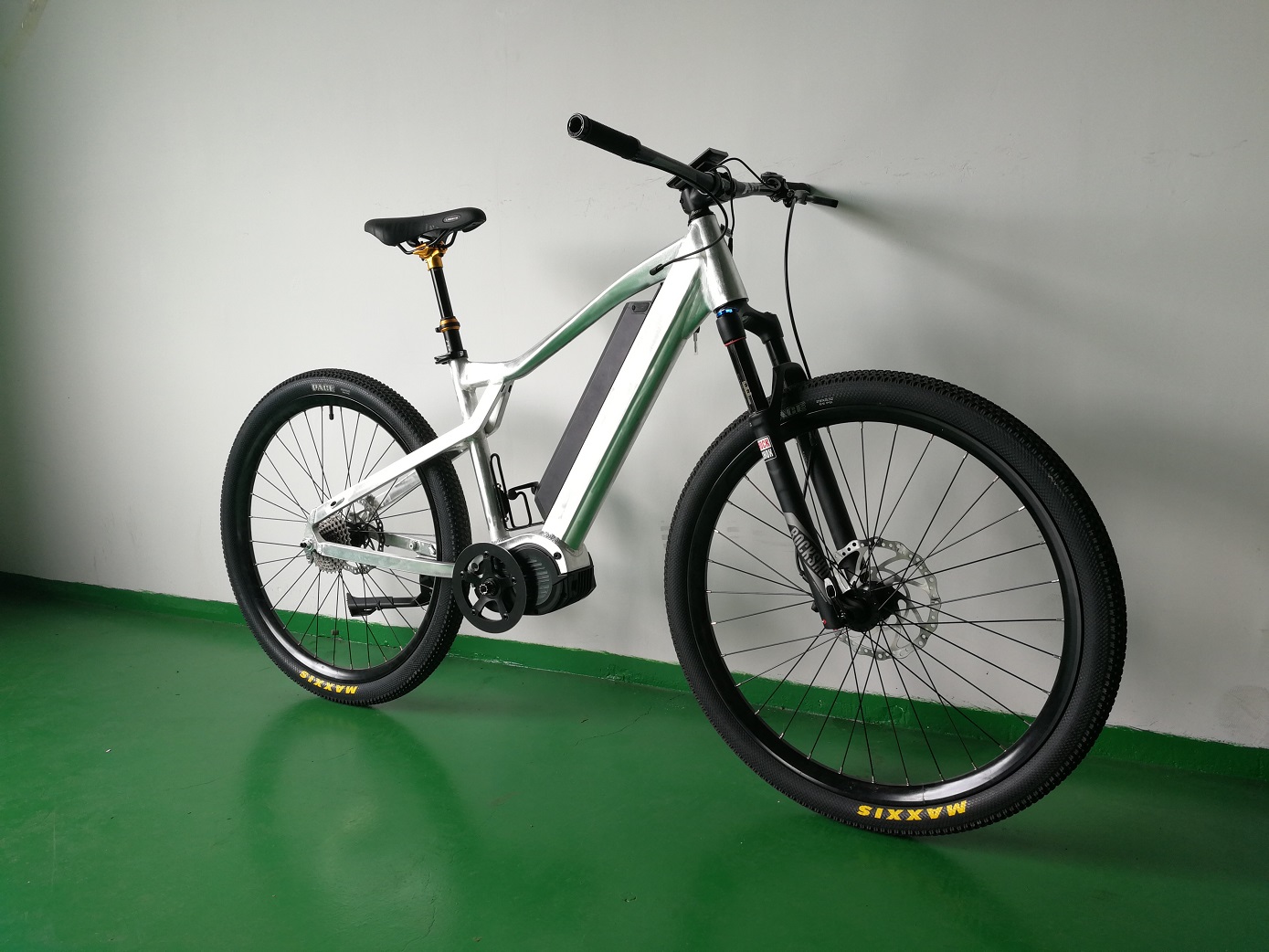 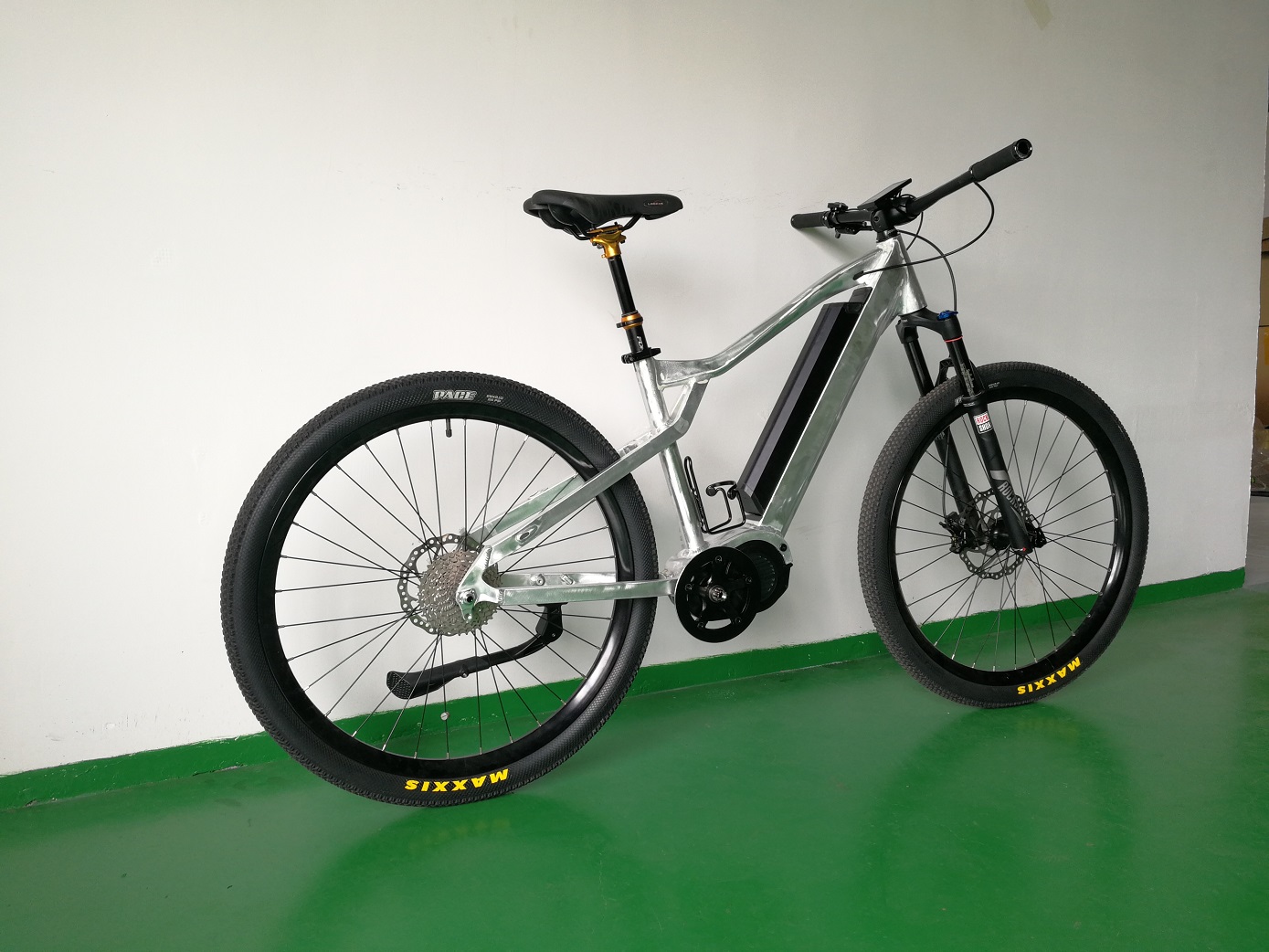 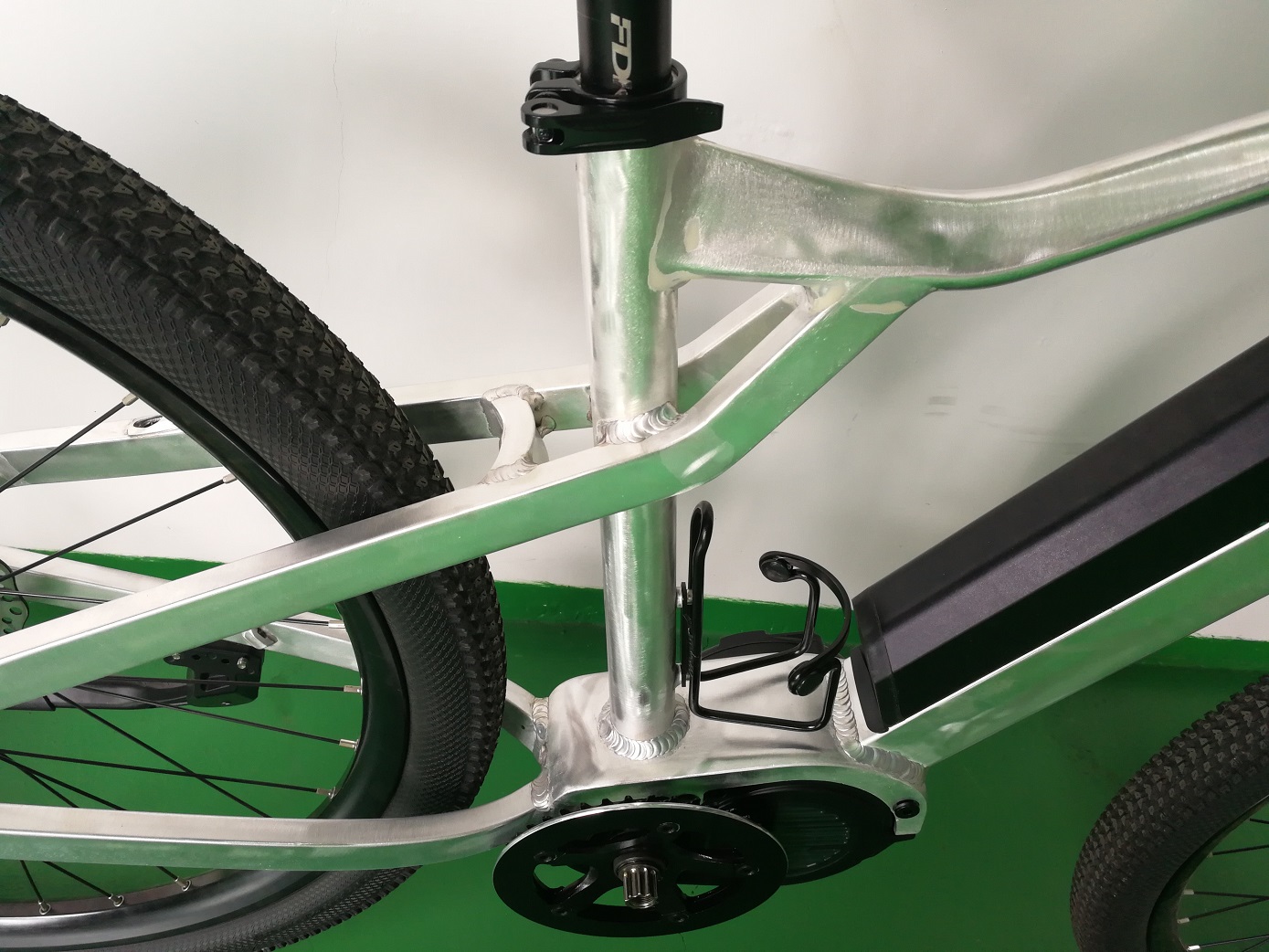 Hello. where can you buy such a rame?
Top

It comes with the bike.

If I could hack the $2.500 or so I'd go with the suspension on the AM, but maybe I'd need the stainless look of these pictures.
Any sufficiently advanced technology is INDISTINGUISHABLE FROM MAGIC!
- Arthur C. Clarke
Top

" stainless look" ??....too pale for a stainless look,
Alloy is very distinctive
This forum owes its existence to Justin of ebikes.ca
Top

I've been thinking about maybe adding a Thudbuster after some time in the saddle, if the semi fat tires don't soak up enough of the rough stuff.
Top

I guess I should move this info over to this thread, and stop hijacking the AM1000 thread.

Pictures of the completed sample bike. 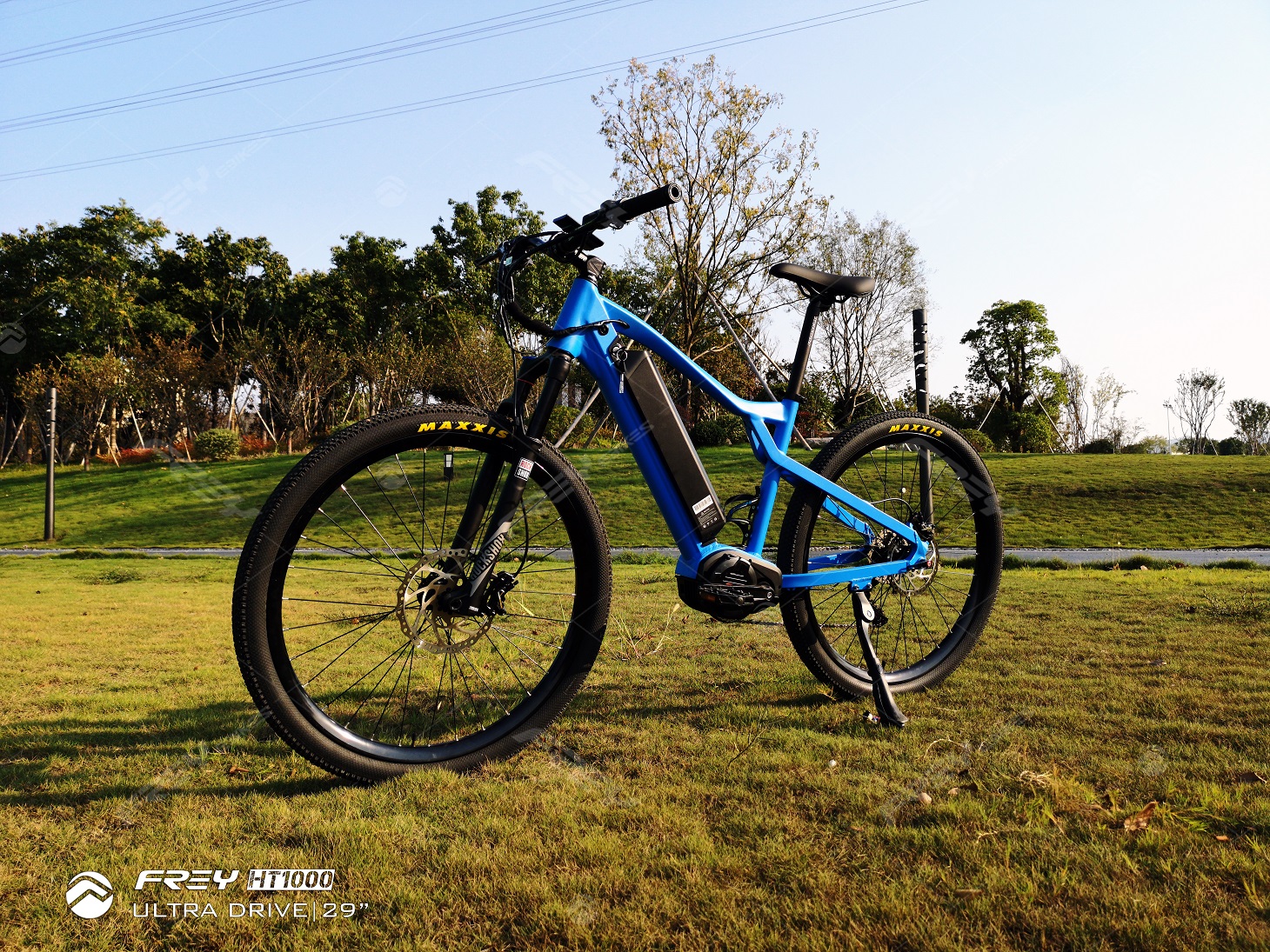 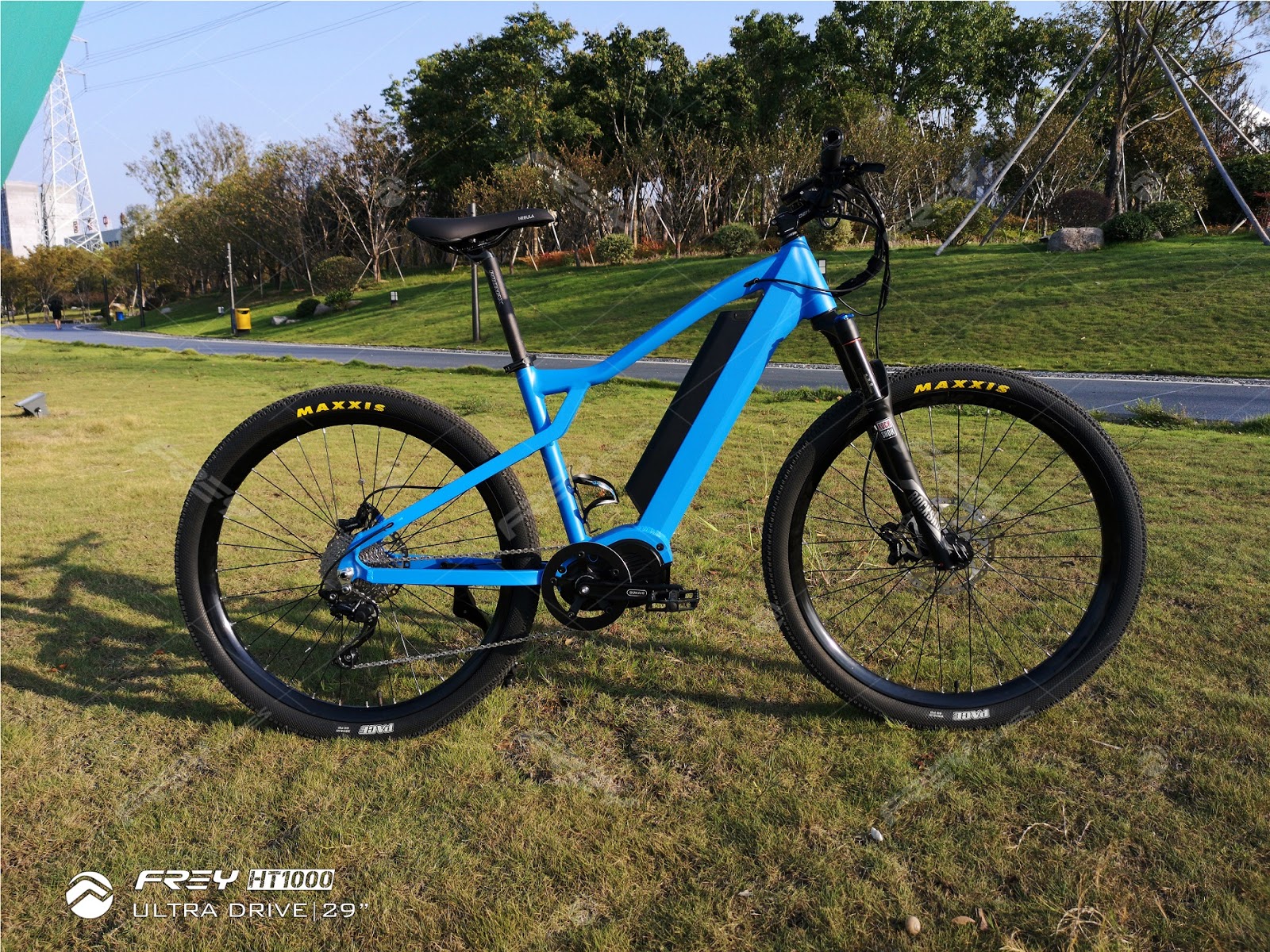 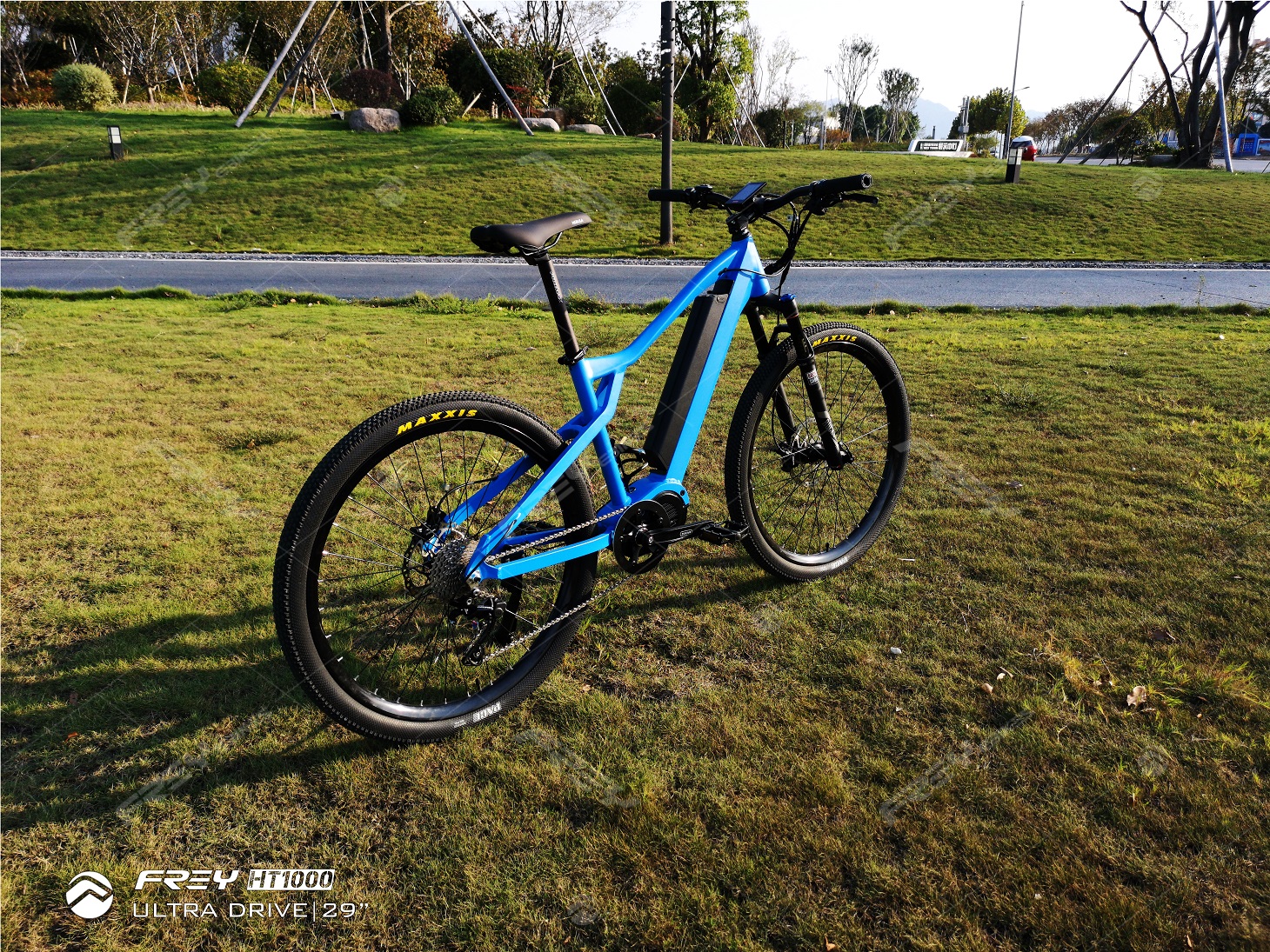 Specs for the pictured bike as per an email exchange with Ivy. Price is less than $2000USD, I don't have the OK to post the actual price.

I've also been told that the wheels will be the same as those used for the AM1000. So that should mean, Novatec hubs, black steel spokes, and double wall al alloy 32H rims.
Top

I like this idea, anyone else?
Should the HT1000 come with an optional fixed rear rack? Is that something Frey is able to do?
Top

We can ask, if people like the idea.
Top

I'm in the market for something very similar to this to make for a utility all weather commuter, maybe someone can guide me based on my requirements?

JWill wrote:I'm in the market for something very similar to this to make for a utility all weather commuter, maybe someone can guide me based on my requirements?

Are you in the US? How much do you think something like that might cost - using biktrix as a reference.

What size are you looking for? Med or large ? Does it have to be mountain or can it be a commuter geometry?

Looks almost perfect to me, but probably have to pay 20% VAT and 10% duty for UK.

Anyone in blighty interested in a possible batch of HT1000's?
Top

Pretty much the exact config I'd want as well! Would you be willing to share (via PM if necessary) the price you paid/shipping/lead time?

Did they say more about the wheels you get with that 27.5+ tire setup?
Top

Batch of frames is being made lead time is a little longer due to this it should be ready to ship just after xmas from spec previous mentioned it goes up 270 dollars ish which is very good considering upgrade sit just over 2k mark usd ,I have partial confirmation of group shipping but if this falls thru will ship by air to Vancouver even with expensive shipping bike is an absolute bargin imo and Ivy is very helpful and willing to change up most components setting the bike up to your wishes will update but so far my experience is very positive .150mm looks like a beast slightly slacking head angle was even willing to throw it on within a day to mock it up for me to see where do you get that service like
Top

JWill wrote: ↑
Oct 20 2018 10:11pm
I'm in the market for something very similar to this to make for a utility all weather commuter, maybe someone can guide me based on my requirements?

Buy a bike that you like .. Then install bbshd
Top

She also mentioned that a rear rack and fenders can be added to the bike; I'll ask for more info on those.
Top

Wanted to mention that I ordered my HT1000 around Christmas. Not sure if it will get out before Chinese New Year but crossing my fingers. It's difficult to manage the ~2 month wait!

Should be able to answer questions once it arrives.
Top

Got our HT1000 last Thursday. The order was processed late but everything after that went quite quickly. It was in customs for about a week and only took 2 weeks after that to reach our residence via the "DDP" shipping option. It came via FedEx.

It was packed quite well, but the derailleur hanger was bent, there were some extras missing, and they sent the wrong front wheel. The bike isn't usable without the correct front wheel, unfortunately, so I'm a bit stuck. EDIT: There were end caps for the hubs that act as spacers that were stuck to the protective packaging. Ivy explained this to me.

I like the look of the blue more in person than I thought I would!

The bike seems huge for a medium. I had hoped that it could fit my 5'4" wife but she can only stand over it in tippy toes. The goal was for each of us to have an e-bike, as similar as possible for maintenance purposes; I wish a Small or Xtra-Small was available.

The rack is very beefy, I'm not sure how I feel about the fenders yet. They're metal so I worry about them being more dangerous if they rub or bend. But I've always had only so-so luck with fenders. The included lights we asked for turn on/off via the Bafang controls and, when not on, the rear light functions as a brake light, which seems super cool. 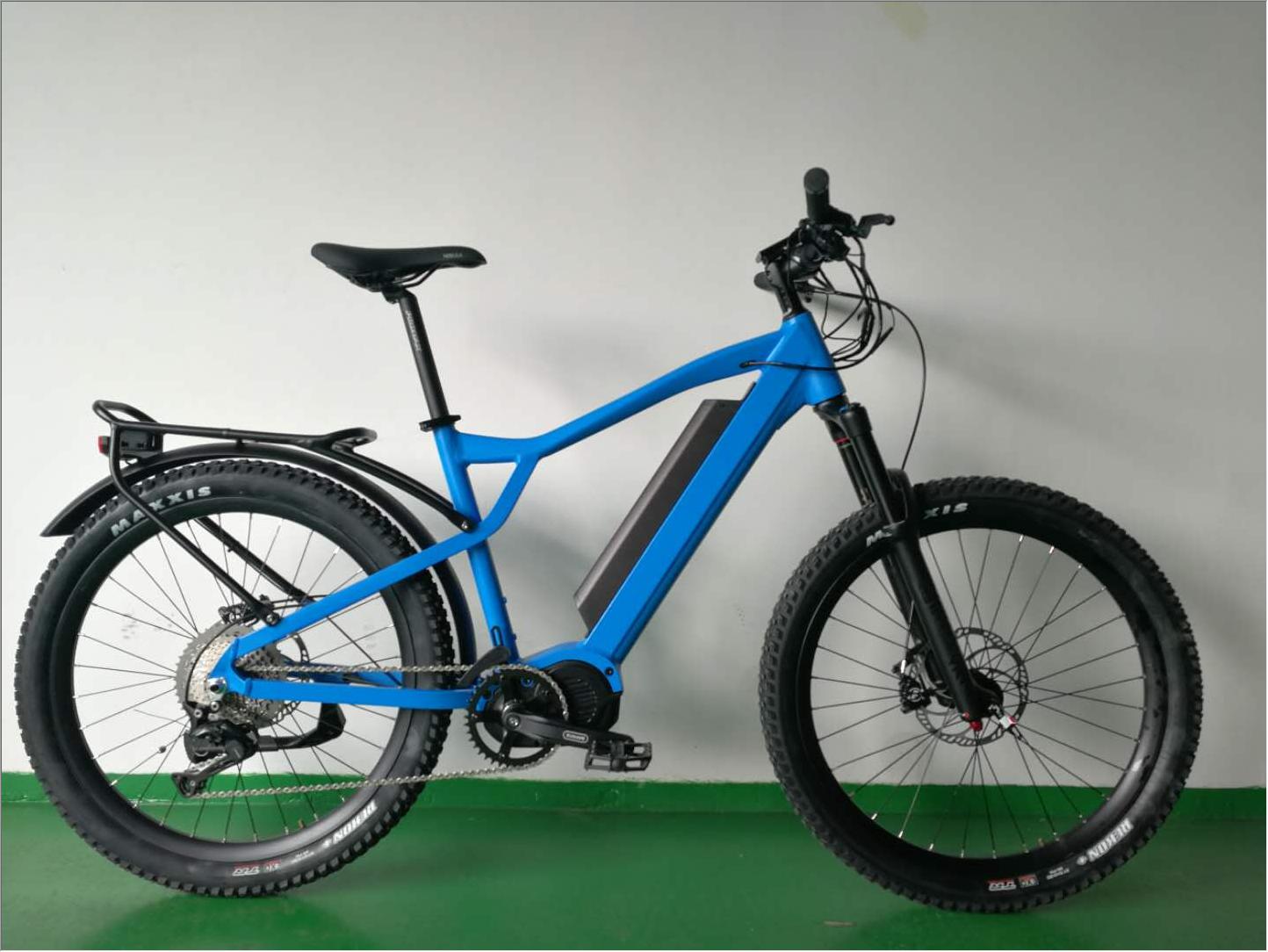 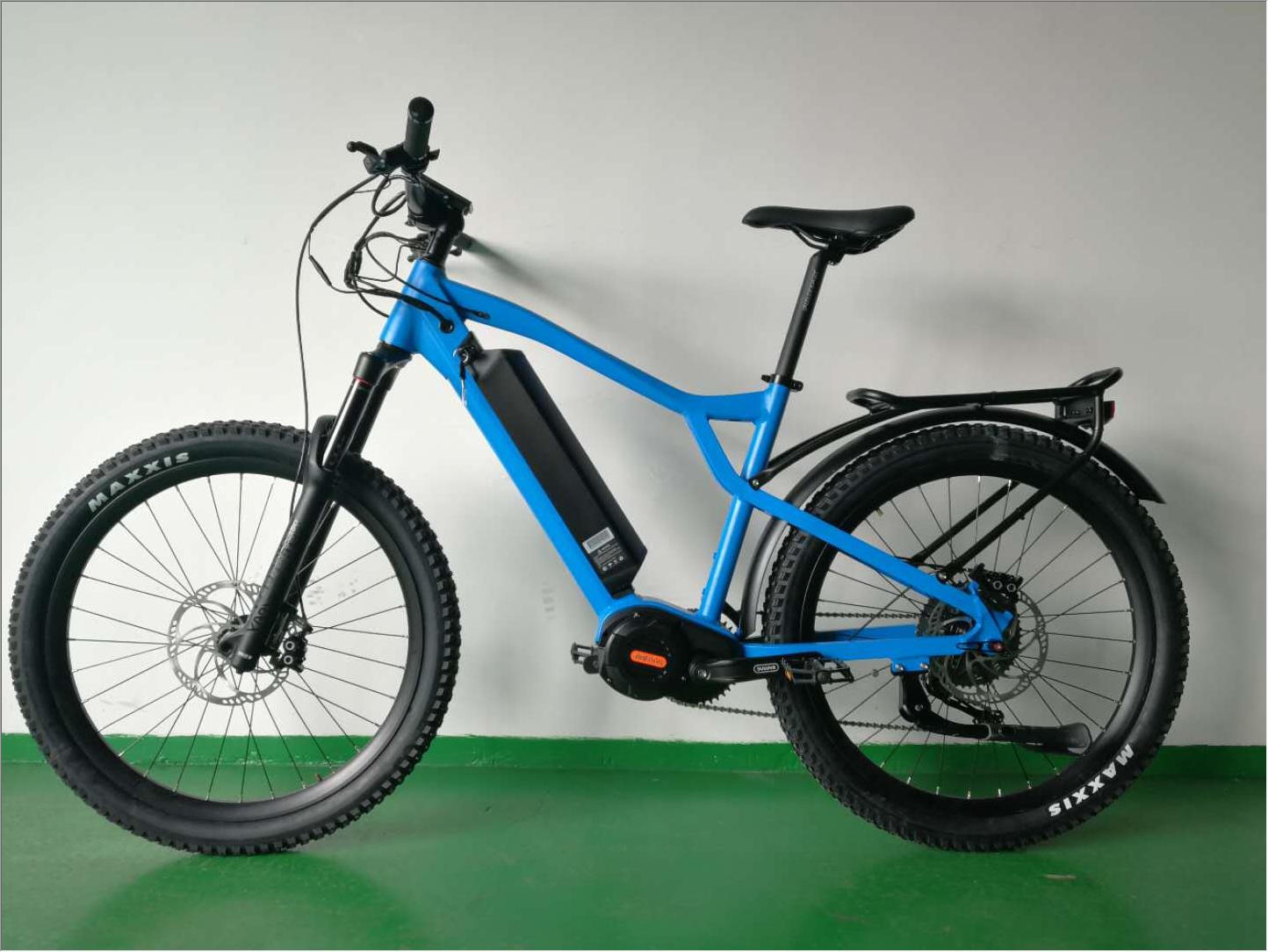 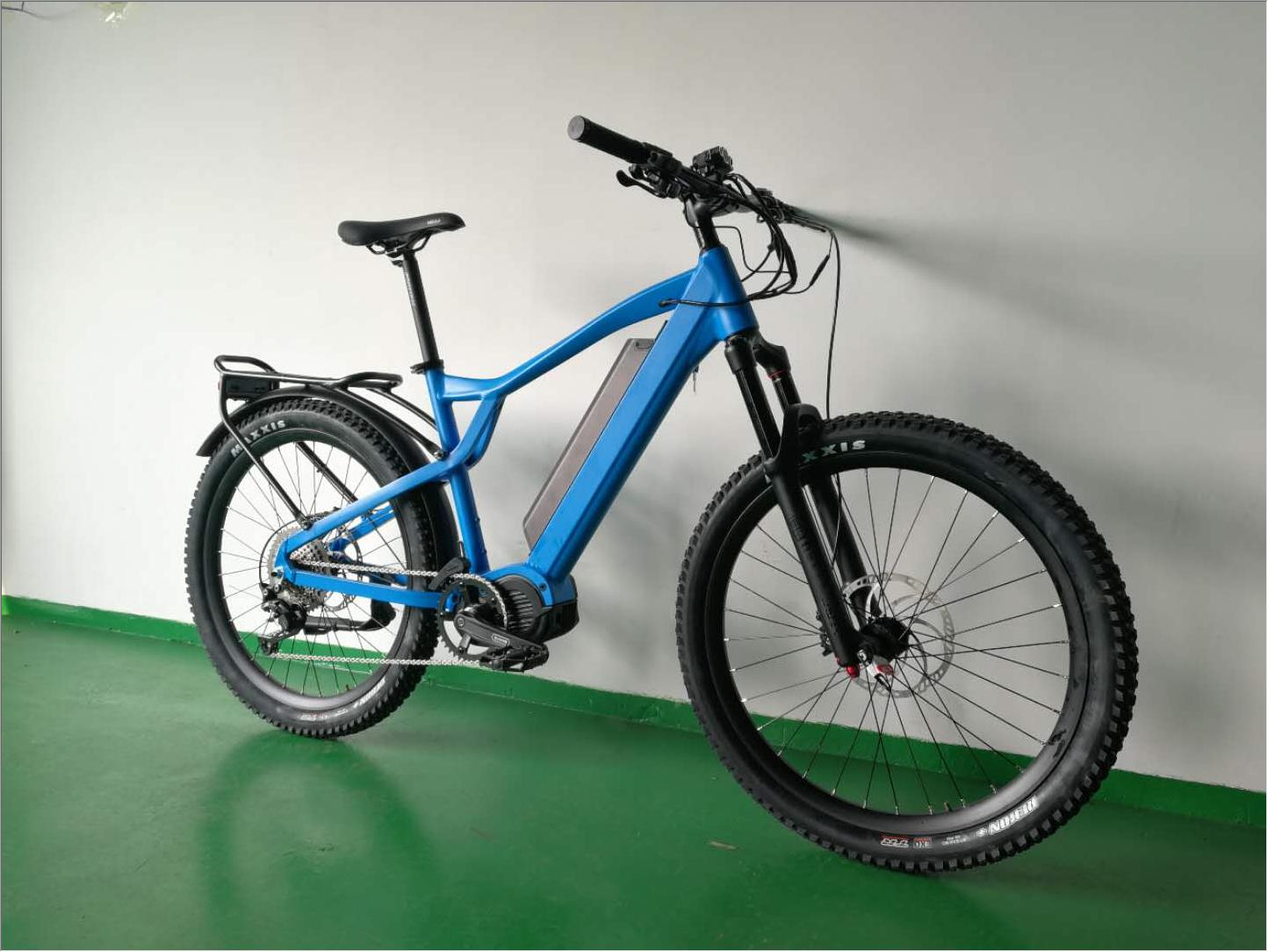 My photo of it mostly unboxed: 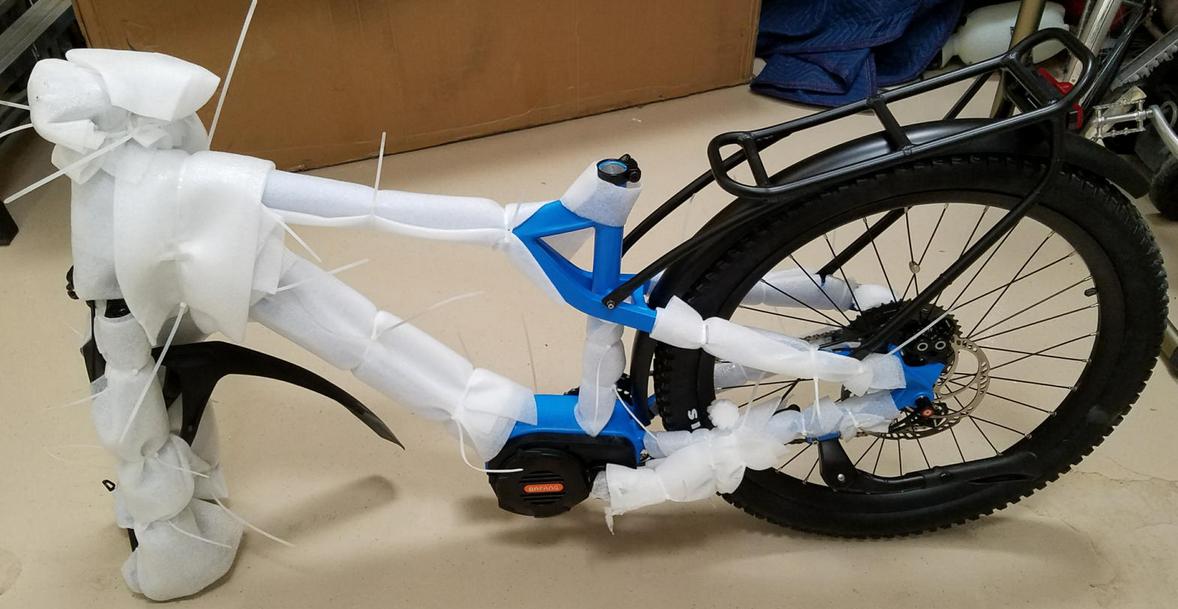