But, rim brakes with proper trued wheel and frequent brake adjustment can provide excellent stopping power.
A little learning is a dangerous thing;
Drink deep, or taste not the Pierian spring:
There, shallow draughts intoxicate the brain,
And drinking largely, sobers us again.

It turned out that the front brake was set up correctly, but the rim had gotten dirty and greasy. I cleaned it with alcohol, and the front brake now works fine again - for a few rides, until it has to be adjusted yet again. It's not so much that the Trailz has terrible brakes when perfectly adjusted and clean, it's that they tend to fall through "mediocre" to "poor" very quickly if you ride often. I've been pricing new bikes, and they all seem to have thumb throttles on the left and the shifter on the right, and most lack water bottle holder bosses in the frame. What I'd love to see is a new aluminum framed, 24 or 36 volt selectable Trailz with aluminum frame and disk brakes. And, since I'm dreaming, a 300 watt geared front hubmotor for stealth cruising.
Top

I think I've asked this before, but don't remember a reply. Is there any harm in using one of my superfluous brick-type SLA 24 volt chargers to partially recharge my 24 volt Ping pack on the road? I know it wouldn't be wise to use it for a full charge, but to bring the pack from, say, 20% state of charge to 60%? It would be much easier to carry one of those on the bike for emergencies than to carry a bigger, expensive 4A lithium charger.
Top

Does anyone know the bottom bracket dimensions for the EZIP Trailz Step-Thru bike? It may be larger than the diamond frame. I'm looking into whether a Bafang Mid-Drive kit will fit my NOS Trailz ST, out of the box.
Top

Does anyone have a spare 8 tooth Trailz motor sprocket? I'm going to put together an EZIP Winter bike from a NOS Trailz Step-Thru, and I want the pedal assist to be slower than usual. (It also wouldn't hurt to have the extra power.) My Magnum Metro is just too fast (12-13MPH), even on the lowest assist level, for Winter riding with my poor circulation.
Top

LeftieBiker wrote: ↑
Sep 20 2018 11:14pm
Does anyone have a spare 8 tooth Trailz motor sprocket? I'm going to put together an EZIP Winter bike from a NOS Trailz Step-Thru, and I want the pedal assist to be slower than usual. (It also wouldn't hurt to have the extra power.) My Magnum Metro is just too fast (12-13MPH), even on the lowest assist level, for Winter riding with my poor circulation.

There was never an 8T, it was a mistaken listing.

Huh. I thought you had an 8T on your "Snow beast." Oh well, the 9T will have to do. I can't put a huge amount of work in on that bike, and the OEM freewheel, like the rest of the bike, is virtually brand new. Thanks.
Top

Having experienced a modern lithium/geared hub/48V bike for almost a year now, and with my need for a second, folding, 20" bike outweighing other choices, I've decided to sell my EZIPs. (Most of them, anyway: my Sister owns one, and if she wants to keep it I'll keep storing it here.) I'm trying to gauge interest before I start taking fresh photos and doing detailed listings, so here is a brief description of what I'll be selling. I'll consider individual sales, or a package deal.

* 2013 Trailz diamond frame, black. This was my very first EZIP. It has about 3.5k miles on it. It's fairly customized and looks nice. The pedal crank still works ok but is worn. The front wheel was slightly bent out of the box, and despite two attempts to fully straighten it, it still wobbles just a little. The rear wheel, while not the original, still has two broken spokes. It can be fixed. The bike has two slightly worn but still good Kenda (IIRC) knobbies. I was using my first Ping pack on it, so it has an XT-60 connector for an external pack.

* 2013 Trailz, diamond frame, black. This one I got NOS, used the original motor for another bike, then acquired a new motor and controller from a conversion kit. The original controller failed at about 2k miles, but it has a new OEM controller from the kit. The bike has roughly 2500 miles on it, and looks great. It also has a computer mount (Cateye Velo 5, IIRC), lights, fenders, aftermarket seat, etc. This was my daily rider until last year: I was having trouble with the freewheel, so I installed a new wheel-tire assembly I'd bought last year. The NEW freewheel also hangs up. This bike comes with 2 good wheel-tire assemblies with 2 bad (?) freewheels. It has, IIRC, an XT-90 connector and an adapter for the XT-60.

* NOS (year undetermined) Trailz step-through, orange. This was bought years ago for a woman who rode it once, found it unbalanced (they put the pack on the motor side) and parked it. I bought it for my Sister, but the bike she rides refuses to die. It is in OEM condition, but the tubes leak. I have new tubes and tires for it, not installed. I tested the bike and it works. Think of it as "The last NOS Trailz." I find the step-through frame to be much nicer than the diamond, especially if you have physical issues.

* 2014 Ping 20AH pack. This is the last of the great ones! I bought it before the company was sold and the quality slipped a little. I've never had ANY trouble with it, although the power cable connection (XT-60, fused) may need to be redone. It has, very roughly, 3k miles and maybe 350 cycles on it - none of them full cycles.

* 2015(?) Ping 20AH pack. A good pack. It just has a faster parasitic loss, and is a little more sluggish in really cold weather. Maybe 300 partial cycles on it, maybe 2k miles.

* 4 amp Ping-provided charger. The fan has always complained a bit when really cold, but works fine.

* Several (four?) OEM battery cases, with batteries. Maybe two of them have still usable batteries. Several EZIP 2A chargers, and one aftermarket charger. I'm willing to remove batteries and ship cases for converters, but it has to be worth my time. I sold two a couple of years ago for about $60 each shipped. I'd sell two together for less per pack.

If you want to lowball me, please wait until June. For now I'm looking for honest guesses at what people would pay, after actually seeing the bikes. The best way to get a great deal would be to buy it all and come with a truck, and cash.
Top

Trailz LS picked up a slow leak in rear tire this week ... took a long ride on side of 4 lane. Must have picked up something real thin, or still stuck tightly through tube, 1st puncture on this model Schwinn Kevlar belted cruiser tire. 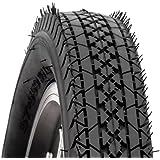 But, gives me a good reason to do a proper Spring tune-up!
Motor chain is a bit stretched and loud, will try the Rust Buster chain with the thick lubricant (great for warmer weather).
Pedal chain has suffered 6+ years (12.000+ miles) of pedal assist and is stretched enough that it often "skips" when shifting and has gotten sloppy around the higher (speed) gears. New chain should fix that up.
Might swap on a nearly new XYD-16 motor (smooth and quiet) from eco-ride 2 that I typically used for transport at higher speed.

I still have a new MY1018z that seems more powerful and efficient ... with the resulting straight cut gear whine. Will likely put on, and gear up, the eco-ride 2 for pedal assist @ 25mph+ . Front fork is multi-capable so might as well bolt on a disc brake and relace rim onto disc hub ... stocked up with piles of good parts.
A little learning is a dangerous thing;
Drink deep, or taste not the Pierian spring:
There, shallow draughts intoxicate the brain,
And drinking largely, sobers us again.

This is one of the bikes I'm selling - it's a current photo. It was my daily rider until I got the Metro last year. 20AH Ping pack, reversed handlebar stem allows fully upright riding (it's also more stable that way, oddly enough). It has a brand new rear wheel and tire on it, but the #@!@ freewheel is sticky. Some synthetic oil dripped into the side of the freewheel may free it up. About 2k miles on the bike. Bike with battery: $500. Bike alone, with XT-90 connector for external pack, and XT-60 quick-disconnect for motor: $225. 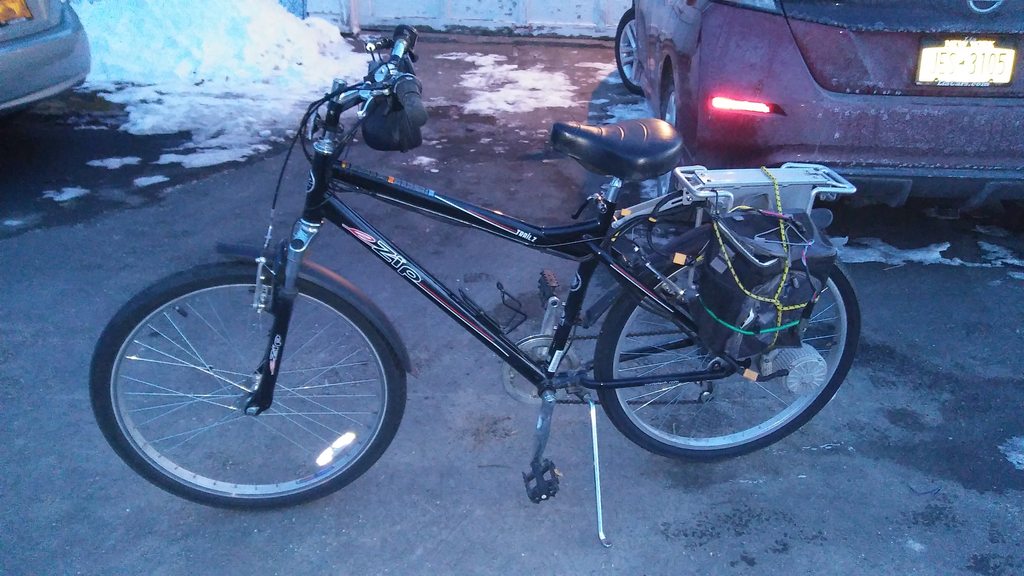 Been playing with my 9s battery and cruises at 24mph+ !
With my seat fully lowered I applied some PLC and pushed up past 28mph. Gives me good hope of maintaining 30mph on my higher geared pedal assist variant.
A little learning is a dangerous thing;
Drink deep, or taste not the Pierian spring:
There, shallow draughts intoxicate the brain,
And drinking largely, sobers us again.

Split sidewall on another alloy rim, 3rd, possibly 4th in my eBike career ... only about 1 every 10,000 miles.
Some just worn others accelerated due to worn or cheap brake pads, 2.125" tires at 65lb might not help. (straightening after "dinging" on potholes didn't help either?)
Preliminary indicator is dishing of rim sidewall, indicating rim sidewall is getting thin = losing integrity.
Too late indicator is bulged rim hitting brake or loud bang as tube explodes through rim.
Fortunately, I have plenty of spare rims and have perfected rim replacement.

#1. Wrap all spoke intersection to stabilize in place (I use a mini spool of 22ga insulated copper wire)
#2. Remove all nipples with cordless electric screwdriver and slot bit
#3. Wiggle hub and spoke assemble out of old rim
#4. Insert hub and spoke assemble into new rim, being careful to leave proper space at nipple point
#5. Tighten all spokes equally *, (place white dot on chuck or bit to make turn count easier)
#6. Center and true on stand or bike

* Assumes proper length spokes (differs by side on rear and some disc wheels)
Last edited by DrkAngel on Jun 02 2019 6:44am, edited 1 time in total.
A little learning is a dangerous thing;
Drink deep, or taste not the Pierian spring:
There, shallow draughts intoxicate the brain,
And drinking largely, sobers us again.

At 14,000 miles, 2nd rear axle (from older eBike) dying, bearing cup wear through.
Since I use this eBike for Comfort Cruising, I have decided to convert the rear from 24V 450w external geared motor to a simple 36V 500w rear hub motor. New oem rear wheel (without motor) costs about the same as complete 500w rear hub kit.

Speed and power should be similar with an even quieter drive-train!
3 x 36V 4.4Ah (13.2Ah) hoverboard batteries in the oem case should be sufficient for casual cruising ... got plenty other ebikes for speeding or climbing or plowing through snow.
A little learning is a dangerous thing;
Drink deep, or taste not the Pierian spring:
There, shallow draughts intoxicate the brain,
And drinking largely, sobers us again.

Comfort Cruiser is down, for hub motor upgrade, so pulled out my "pedal bike" ...