Get all your technical information about electric bikes here.
Post Reply
34 posts

If you ain't jumping this bish, get the QS motor, I've pushed over 10k thru mine and with the FF+hubsinks and it hits 60mph with ease.

Who did you find to insure it? Was it hard to get a title for it?

I see where your heading Chalo. Nobody insures it and there is no title. Not interested in either.

I didn't build this so I could ask rich bureaucrats for permission to ride it.

You really ought to go to a controller capable of more amps if you are considering the QS 205 V3. I would step up to atleast a ASI BAC 2000 controller to get the full potential out of that motor.
Top

Got my wheel yesterday: 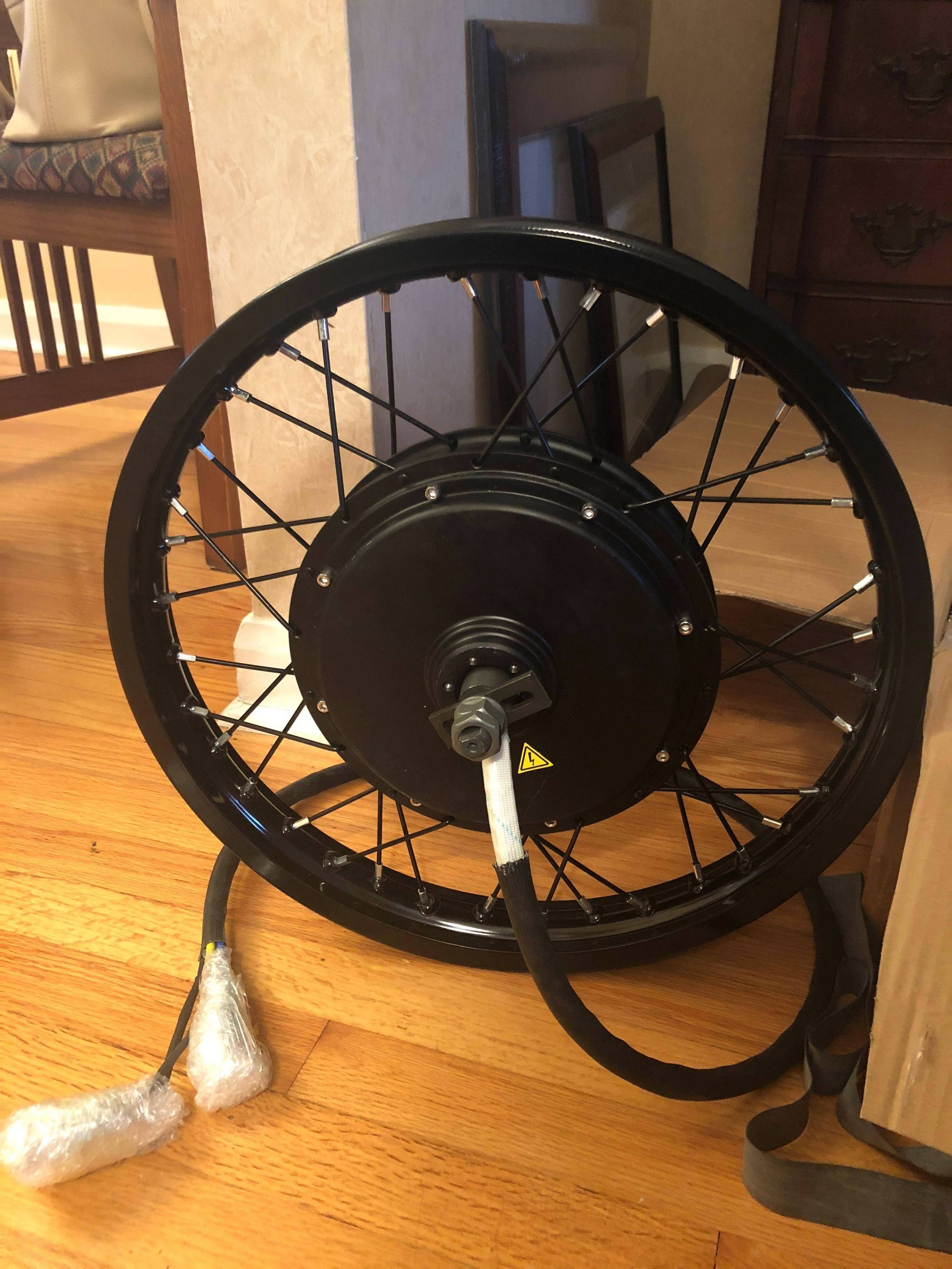 The mxus 3kw is not that bad, perhaps I am just used to it.
Carrying the 3kw up the stairs.. well

When was the last time you did that?
I cant remember if at all.
The leaf 1500W is a nice motor, if I wanted a lighter, more nimble ride for fast single track, thats the motor to have!

This is why i'm a fan of the leafmotor 1.5kw on about 4kw of peak power, tuned to do 2kw continuous ( it can handle it, it's underrated ).
I could still pretty easily flip the bike over for a tire change or carry it upstairs with a few grunts along the way

Some people claim that hubsinks and ferrofluid on such a small motor increase it's continuous capability to 2.5-3kw.

The mxus 3kw ( or one of it's clones ) gets you 2 more lbs and a more likely realistic rating for the 45mm hubs is around 2500w continuous.. add ferrofluid and/or a hubsink and you are up to meeting a 3kw continuous requirement.
( yes, i owned a leafmotor and a MXUS 3kw.. the 3kw was very underwhelming. Later found out that the 3kw rating was done in a 20" wheel, which is a real cheater way to do it. )

Otherwise if you want low weight and high power, RC motors with dual stage reductions to the rear are the only way to go. But those setups are kinda exotic and still in the 'fabricators only need apply' stage at this time.

Moving a bike up the stairs frequently and flipping one upside to change a tire every ~10 miles is how i learned to appreciate power density in motors, and have persistently sought out the most efficient and light e-components ever since.

But not everyone has the same conditions.
"Love and compassion are necessities, not luxuries. Without them, humanity cannot survive." - Dalai Lama

I know this thread is a little old but wanted to add an option for anyone wanting to build a relatively light ebike.

The total weight of my ebike is 62 lbs...I used a steel framed hardtail for the build. I went with a MAC motor because it produces more torque per amp than any other motor and weighs 4 kg/8.8 lbs and a 14s6p battery. IMO the MAC is the best motor available IF you use it properly. By "properly" I mean you don't try to push too much power through it steady state. "Too Much" varies depending on the conditions and your weight but it is approximately more than 1100-1200 watts steady state. And "Steady State" means continuously. You can push about 2,500 watts through it for five minutes and a LOT more than that for short periods of time. In other words, you can push 1100-1200 watts through it all day long...again depending on your weight, hills, rear wheel size, etc. and that correlates to a speed of less than 30 mph. Just an example of what I mean by a "LOT"...I have run a battery and controller capable of 58.8v and 60A/180A (battery/phase) current but those power peak power levels are only consumed for 10-15 seconds when starting off and they drop as the bike gets moving. I have never had a problem with my clutch or gears at these power levels wink: .

A 10T MAC in a 27.5 rim running a Schwalbe Super Moto-X 27.5x2.8" tire can run about 28 mph all day long without overheating but push it much faster (requires a larger diameter tire), climb hills continuously, or if you and your bike together are very heavy (heavy in this case is a combined weight over about 310 lbs) then the MAC is NOT the best choice. Like I said, my bike weighs 62 lbs with a 10T MAC and a 14s6p battery and I weigh about 210 lbs ready to ride so the combined weight is 272 lbs. Use the Grin Tech Motor Simulator to get your predicted temperatures and use about a 1.5%-2% incline to make things more realistic even if you think you ride on flat ground. Your steady state temps should not exceed about 135C...and lower would be better. If you go with a 12T MAC then the combined weight can go a little higher...about 350 lbs but your top speed will drop to about 23 mph. All of this info is just an approximation so do your research and use the Grin Tech Motor Simulator or even better, use the Trip Simulator to check performance and temperatures.

A. Want to go 30 mph or faster or if you and/or your bike are fairly heavy...go with a hub motor AND always over design/select because if you want 3000 watts now then you'll want more later

B. Want a relatively lightweight bike that works great under 30 mph as long as you use it appropriately and you DON'T want to run it on 72v...go with a MAC. The same thing that makes the MAC the highest producing torque per amp motor causes the losses to stack up fairly quickly if you spin it too fast i.e. run it on 72v instead of 52v. That doesn't mean you can't run a MAC on 72v, just that you'll face a few more issues trying to keep it cool enough.

C. Want to ride off road...go with a mid drive like the BBSHD. Because you can change the gearing to keep the motor spinning efficiently as well as torque multiplication.

There are ALWAYS exceptions to everything I said above...it is just a starting point