I am really a car guy, and I have built cars before. But not elevtric ones. I have thought about bulding an electric bicicle for some time, but I don´t really think I will have much use for one. But now I have a girlfrend without a drivers licence, and I thougt maby she could use it sometimes, so I don´t have to drive her everywhere all the time..
And I like electricity

I bougt some cheap bikes, first one with aluminum frame and front suspention. But the frame was so small, I could´nt fit the battery I planed to use. So I got some other bikes, and started on another frame. But I changed my mind and started with the first one instead..

I didn´t plan on doing a build thread, so I didn´t get very good pictures of everything. But I hope I can get something interesting put together anyway. 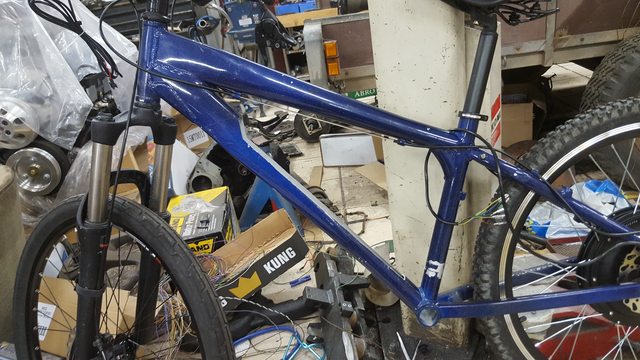 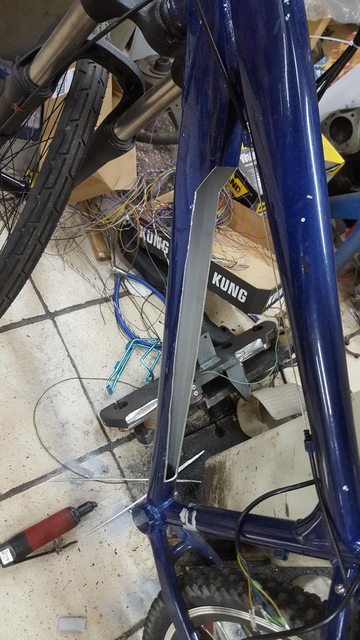 Sometime in the beginning, I cut a part of the frame to get some room for the battery. 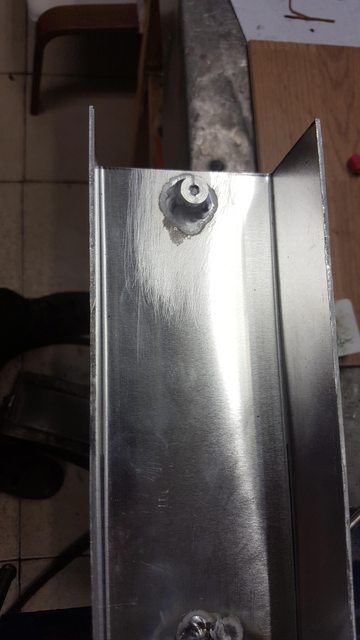 Made a bracket for the battery, and part for the frame. 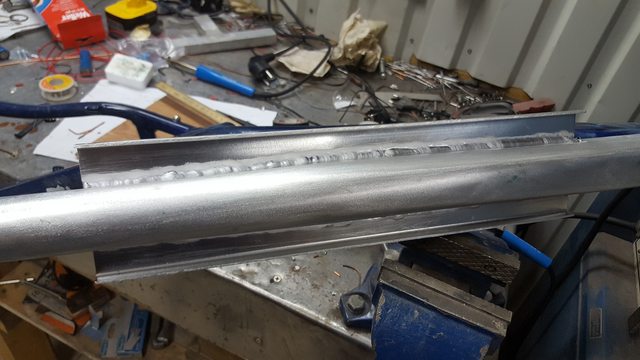 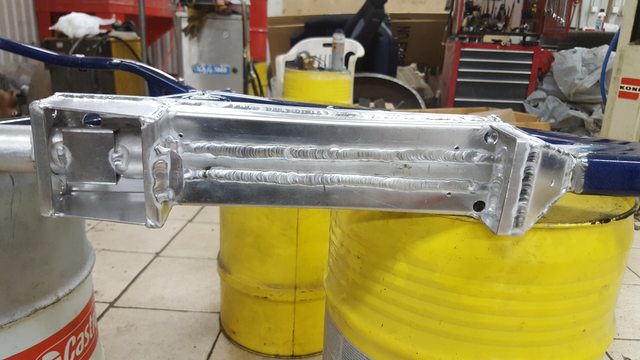 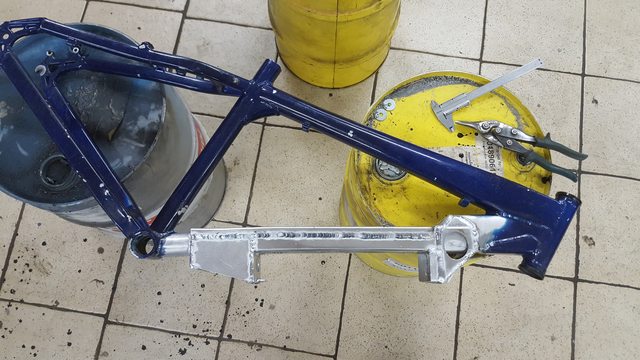 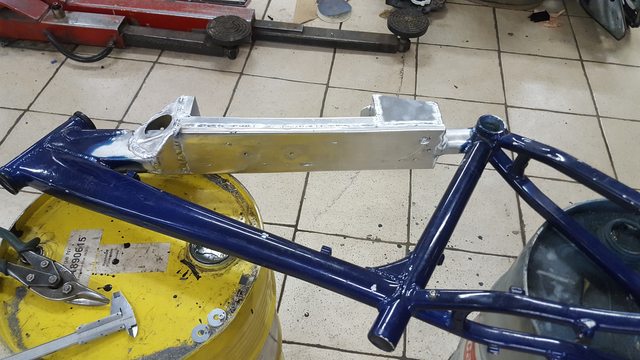 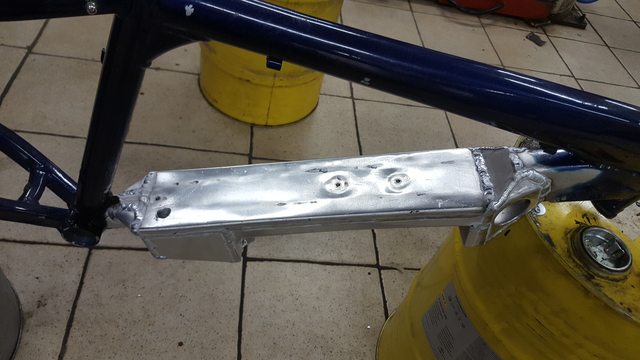 Somewhere around there I started with the battery, I bought a case for 65 18650:s. 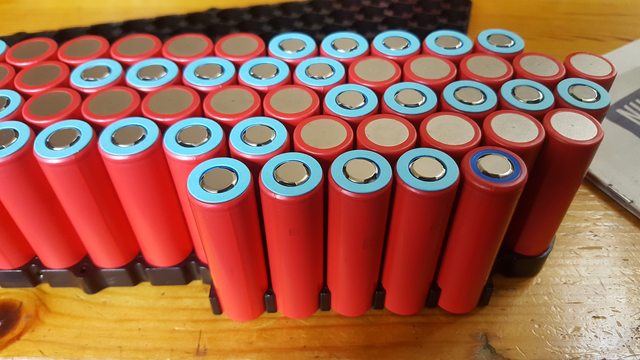 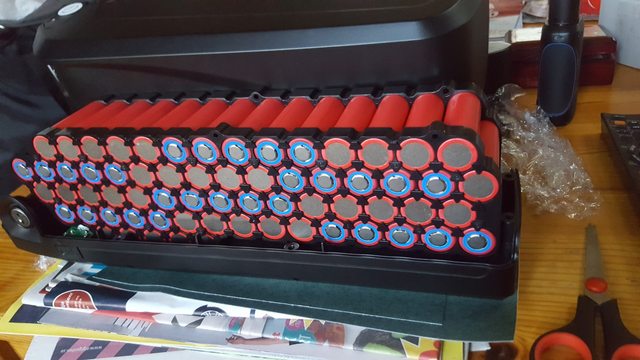 I tried to weld nickel strips with a simple welder with a car battery and a solenid, but I was not happy with the resault.
So I ended up soldering. 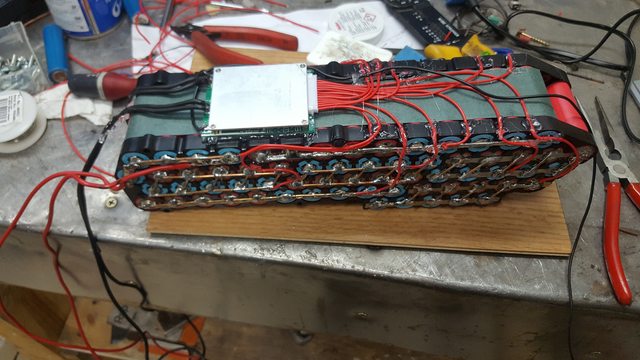 That bms was a disapointment as well, It drained de first group on the negative side and tried to kill my battery. After I removed it and balanced manuelly it was fine. The battery hardly seems to need any balancing now, so far it has kept in perfect balance.

Moving on, I wanted torque plates.
I found some left over steel from a 4-link kit: 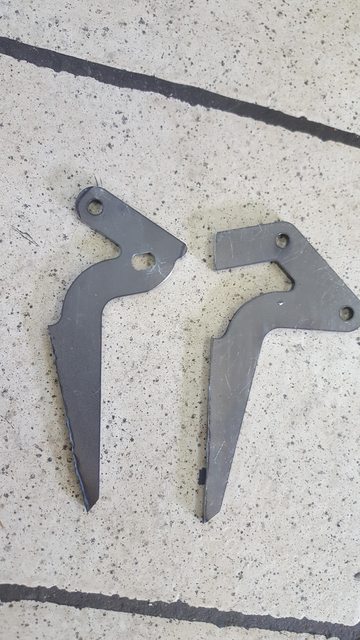 6mm, probably very much overkill for this build.. 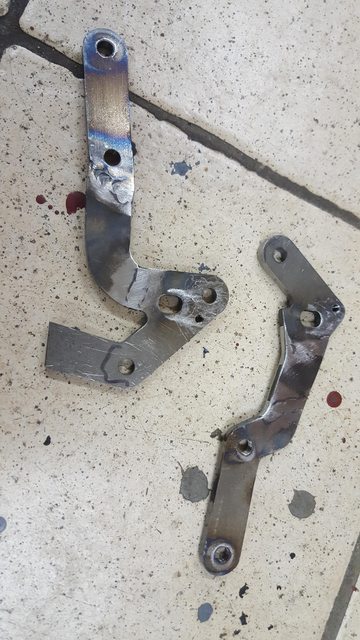 This is (almost) how they ended up, a very tight fit on the chain side..
But that was to change later on. 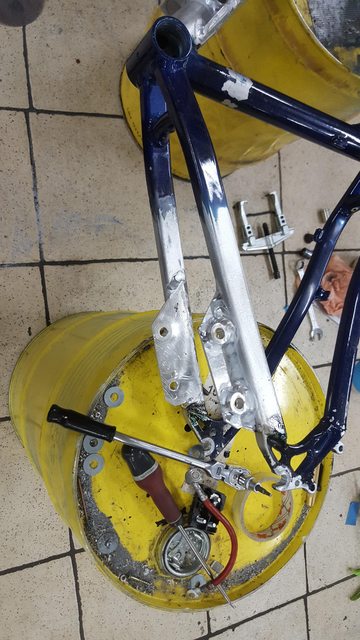 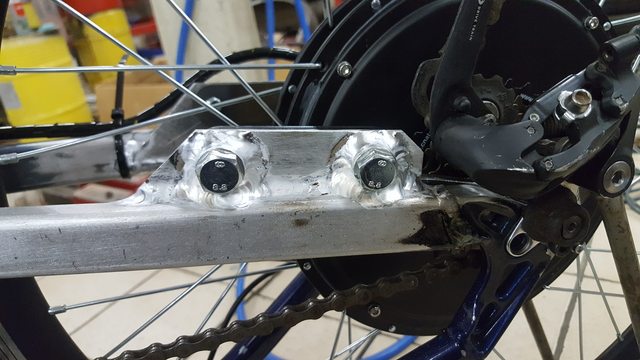 And somewere to bolt it to the frame

This is just how it looked at the beginning, I smoothed everything later.

Putting stuff together and see how it works: 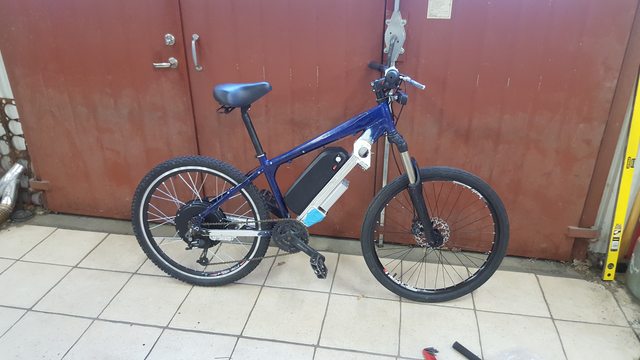 I'm new to this forum but I think build threads are more for the enjoyment of the author then the thousands of readers.
lots of people will see it but most won't reply.
If it helps any, I'm interested.

Loving the welding BTW. My welding is garbage by comparison.
Top

Very nice j bjork, your welding skills are awesome. You have the skill to do some very nice builds,.. hope to see more.

I'm concerned about your BMS though. A lithium pack needs a BMS in order to be safe, as it regulates charging and
outgoing currents , it also protects the pack from discharging too low, and killing all your cells. An unbalanced pack is a
dangerous pack. The BMS is 'THE' most important thing on your bike, both for the bikes safety, and your safety.

Your first priority now is to address that issue, and install a correct BMS.

Good luck, and hope to see more from you!
Top

Thank you for the responces

APL, I have seen your cruiser buld. That is really on another level, impessive

I am not very concerned about the bms for now, my charger did charge a little high. But I have been able to turn it down a little, and monitor the battery manuelly when charging. And no surprices so far, my batteys are in balance down to the third decimal.

Moving on, I modified an old rack to fit the bike. (rack is what google translate said anyway) 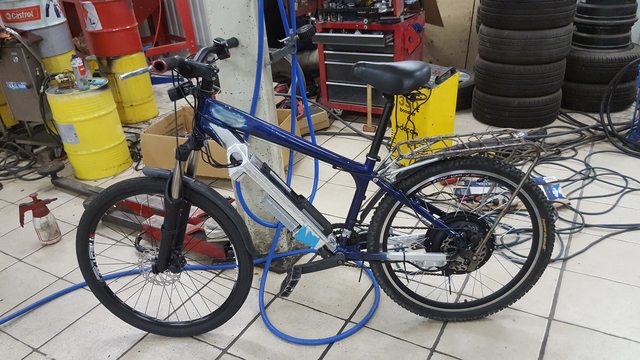 Wiring for the 12v system 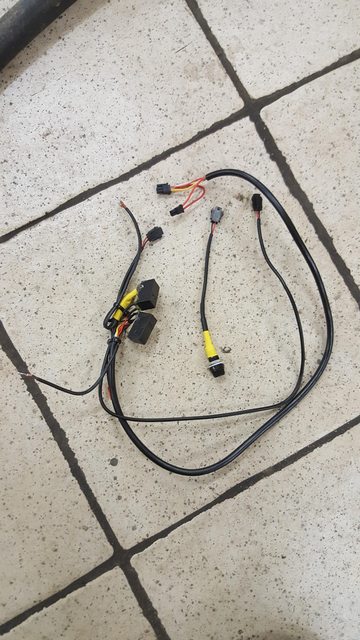 I painted the side covers and the stator for better heat transfer.
I also changed the sprocket with 14 tooth smallest gear for a 12 tooth single gear to be able to keep up whit the pedals.. 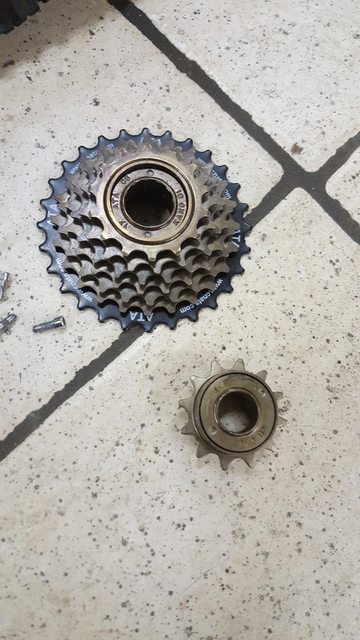 Primer on the frame: 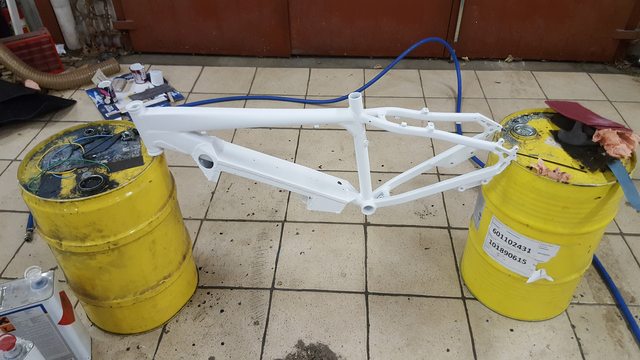 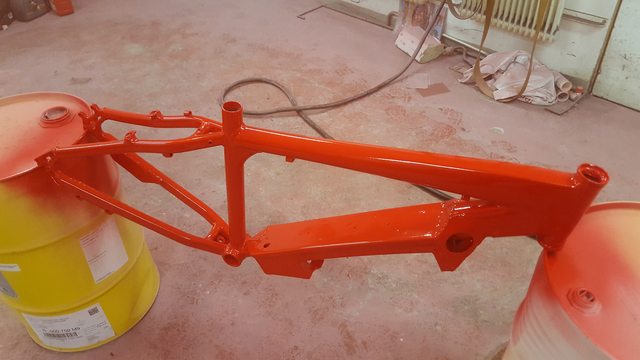 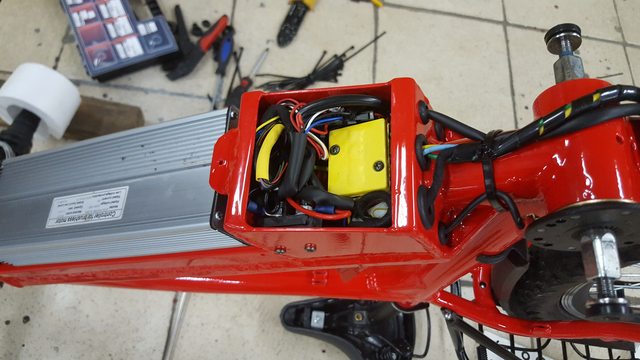 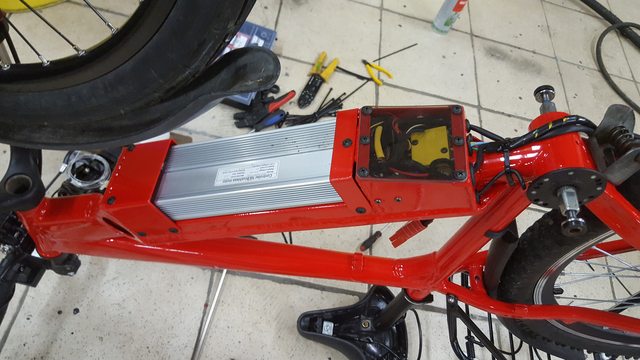 I changed the weak connectons for the battery for better ones: 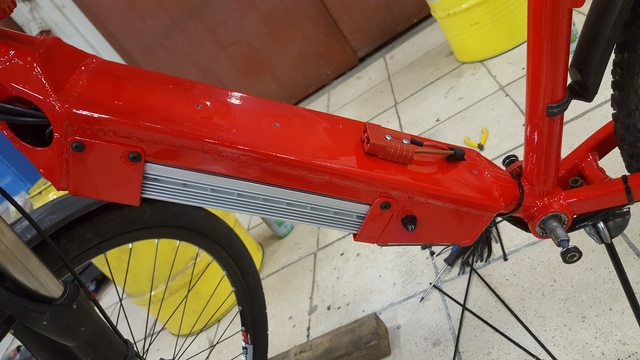 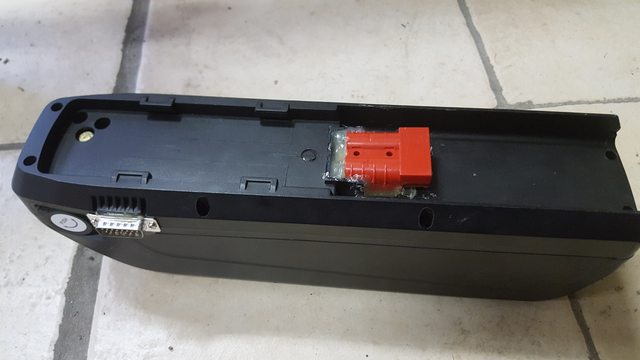 I also changed the rear fender to something I think fits better. 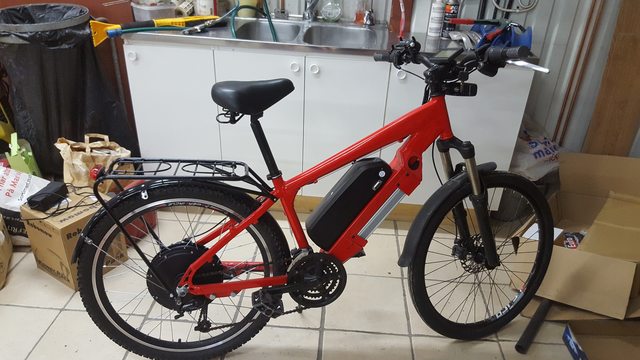 Thanks, the bike has been up and running for a while now.
There has been a little problem with the battery.
The first cell group, that was probably killed by the bms has been.. killed.
It seemed alright for a few cycles, but then it lost capacity badly.
It got to lower voltges then the rest at discharging, and higher at charging.

I took the battery apart, but did´nt see anything wrong with it.
So I changed all the cells in that group. I checked them afterwords, and four af the five cells did´nt seem to hold a steady voltage. When mesuring with a voltmeter they lost voltage. I charged an discharged the ramaining cell, and the same thing happened with that cell too. After that the battery seems fine. I also get higher speed, so clearly I have I have less voltage drop.

There is also a problem with the paint, or maby I should say the old paint that was on the frame.
I did´nt sand of all the paint, I just sanded and painted over where it was not damaged.
But it did´nt take the solvents of the new paint, so it cracked after a while. The arias where there are only new paint are fine. 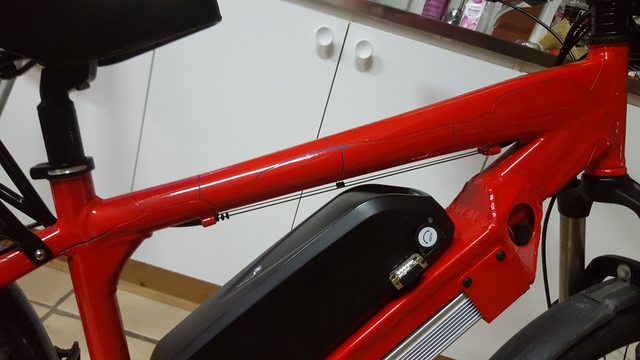 j bjork wrote: ↑
Jul 20 2019 3:15pm
There is also a problem with the paint, or maby I should say the old paint that was on the frame.
I did´nt sand of all the paint, I just sanded and painted over where it was not damaged.
But it did´nt take the solvents of the new paint, so it cracked after a while. The arias where there are only new paint are fine.

It is very annying, maby I will repaint it in the winter, and get rid of all the old paint first..

I have btw been through your 3 build threads.
So curious about what you do for a living and the access to all space and tools...etc, professional workshop level stuff man

Thanks, this is my hobby garage at home

what a great job... thought out, then thought out again, which is how it goes!! Excellent design and work...
Top